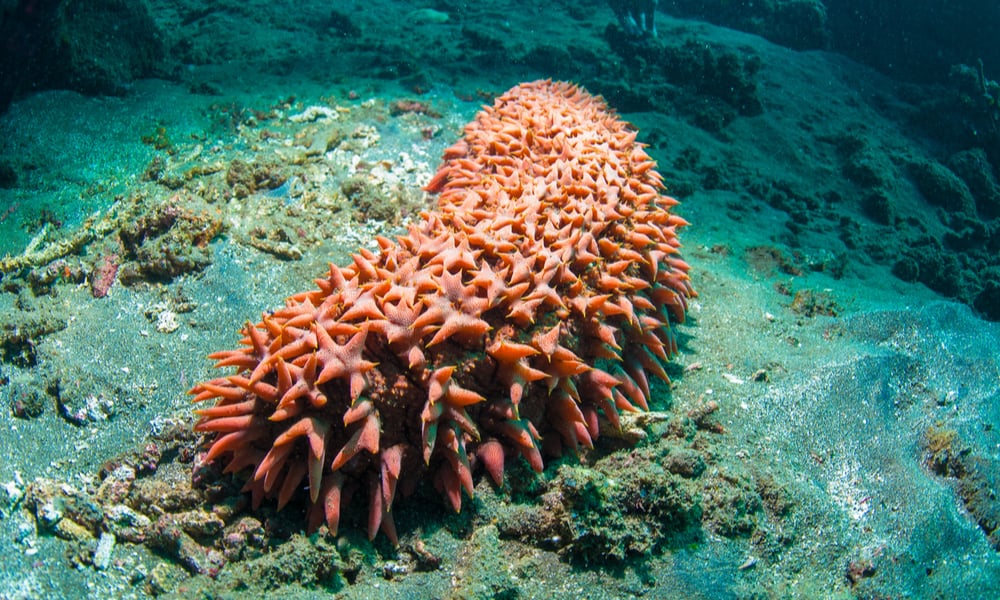 Is this the first time you’ve heard the name sea cucumbers? Well, they are not fruits. Sea cucumbers are, in fact, sea animals. They may not look like much, but they are more than capable of surviving in the deepest depths of the sea.

Let’s learn and explore “what do sea cucumbers eat?”

Sea cucumbers (Holothuroidea)  are marine animals with elongated bodies and leathery skin containing a single gonad (reproductive gland). They are named for their resemblance to the cucumber plant.

Sea cucumbers belong to a group of marine animals called echinoderms like sea urchins and starfish. There are about 1,250 species, many of which resemble sea cucumbers.

They are found worldwide on sea floors, shallow and deep. You can find the most significant numbers located in the Asian Pacific region. Humans gather sea cucumbers for consumption, otherwise known as aquaculture. The product harvested is known as trepan, belate, or namako.

Sea cucumbers play an essential role in marine ecosystems as they aid in recycling nutrients by breaking down detritus and other organic matter, after which bacteria can carry on the degradation process.

Sea cucumbers are usually 4-12 inches (10-30 centimeters) in length, the smallest of all being 3 millimeters long and the largest being 3 meters (10 feet) long.

Different species exhibit a variety of shapes, from some being spherical to others being worm-like and lacking arms. This trait is common in many other echinoderms, such as starfish.

The mouth is located at the front end of the sea cucumbers body, surrounded by a ring of retractable tentacles.

The tentacles are modified to serve as feet for movement. They can either be simple, tree-like or branched. In addition to the tentacles, some sea cucumbers have muscles that contract to aid in movement.

Most predators typically avoid sea cucumbers because of the toxins they produce and the unique defense systems. However, some predators like the Tonna galea and Tonna perdix paralyze them using a strong poison before swallowing them whole.

Some sea cucumbers, when threatened, shoot out sticky threads that trap their enemies, allowing them to escape. Also, they get rid of a better part of their internal organs from their anus to distract their enemies long enough to escape.

What Do Sea Cucumbers Eat In The Wild? 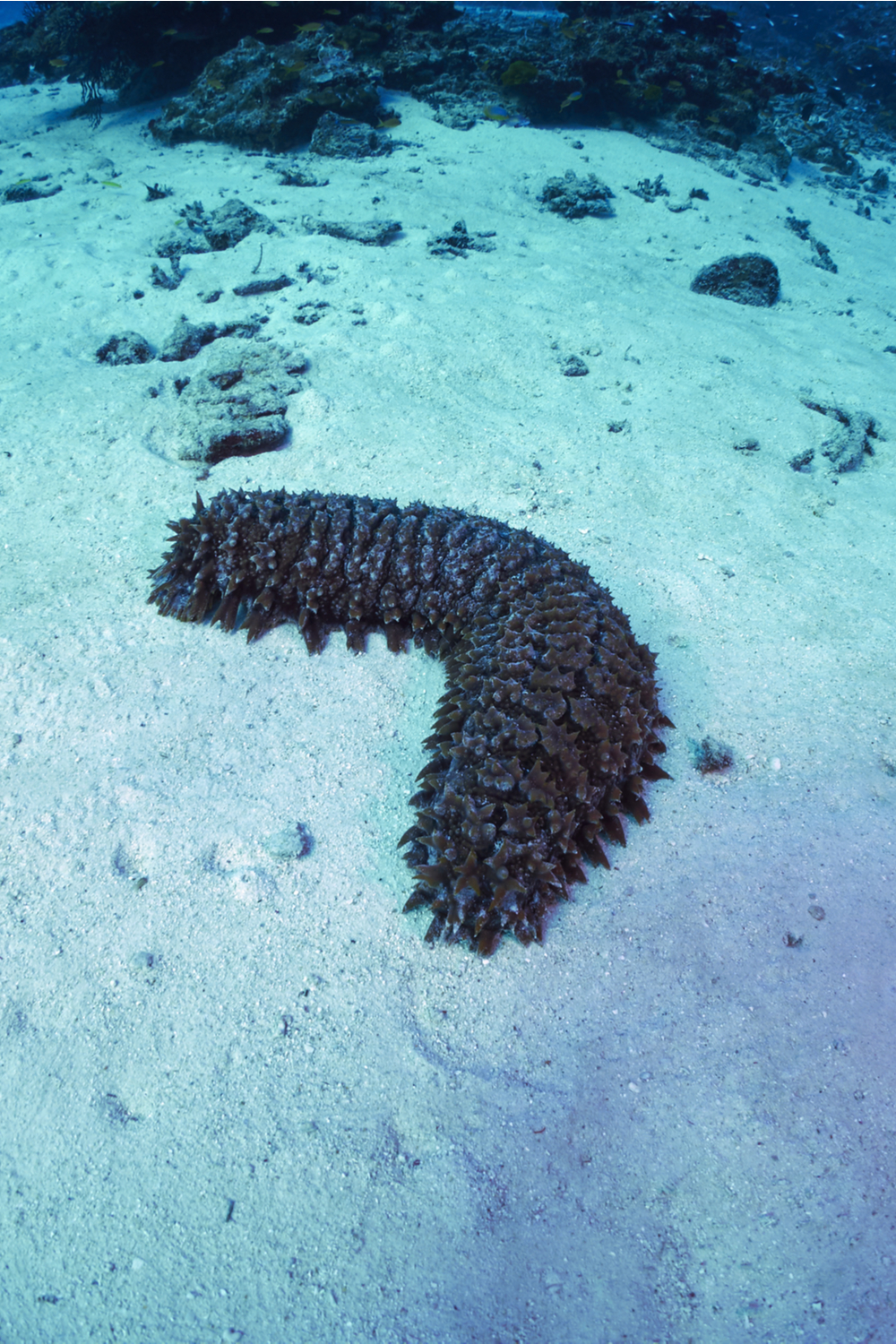 Sea cucumbers benthic feeders, meaning they live on the seafloor and get their food from there. Sea cucumbers use their retractable tentacles to trap food material and insert it in their mouths for digestion.

Sea cucumbers get their food by scavenging rather than tracking it down as they are not the best hunters. Being omnivores, they feed on both plants and animal matter, depending on what’s available.

When feeding, they use their feeding arms (tentacles) to get hold of particles in water. Alternatively, they plow them into the sand, eat them, and poop out useful clean valuable material to other marine life.

Burrowing sea cucumbers species ingest a lot of sediments (rocks, minerals/remains of plants and animals) from which they absorb nutrients.

Sea cucumbers are the earthworms of the sea. The poop they discharge is rich in calcium carbonate that aids in the formation of coral reefs.

Below is a list of what they typically eat every day for sustenance:

Recent discoveries show that sea cucumbers also benefit from feeding on seagrass and its sediments. Their diets vary from time to time following weather changes and their migration patterns.

When food is unavailable, sea cucumbers have a unique way of surviving. They will slowly feed on themselves. As a result, they shrink. 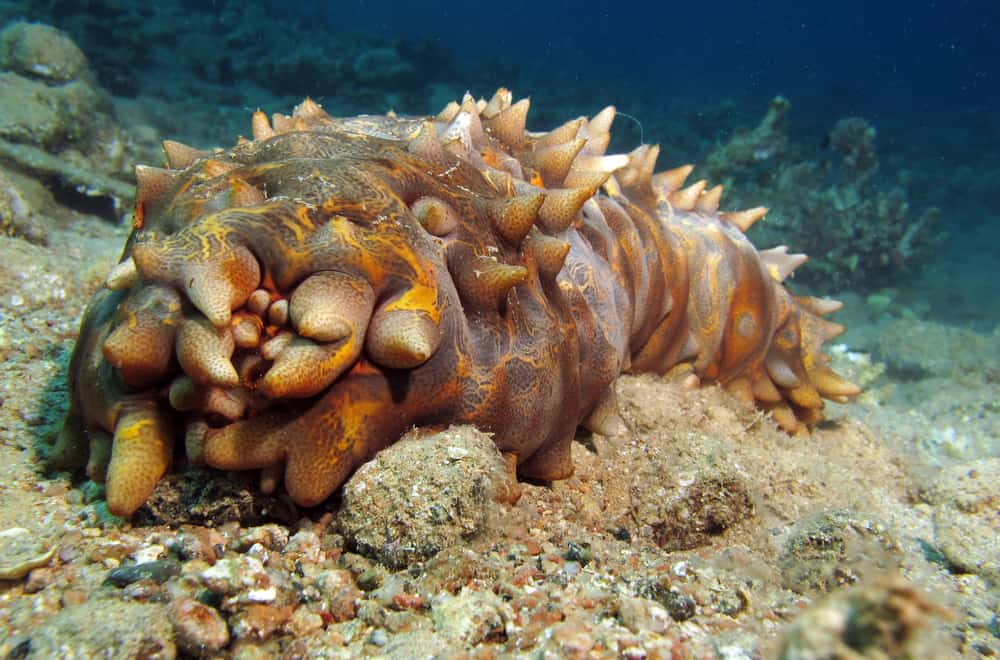 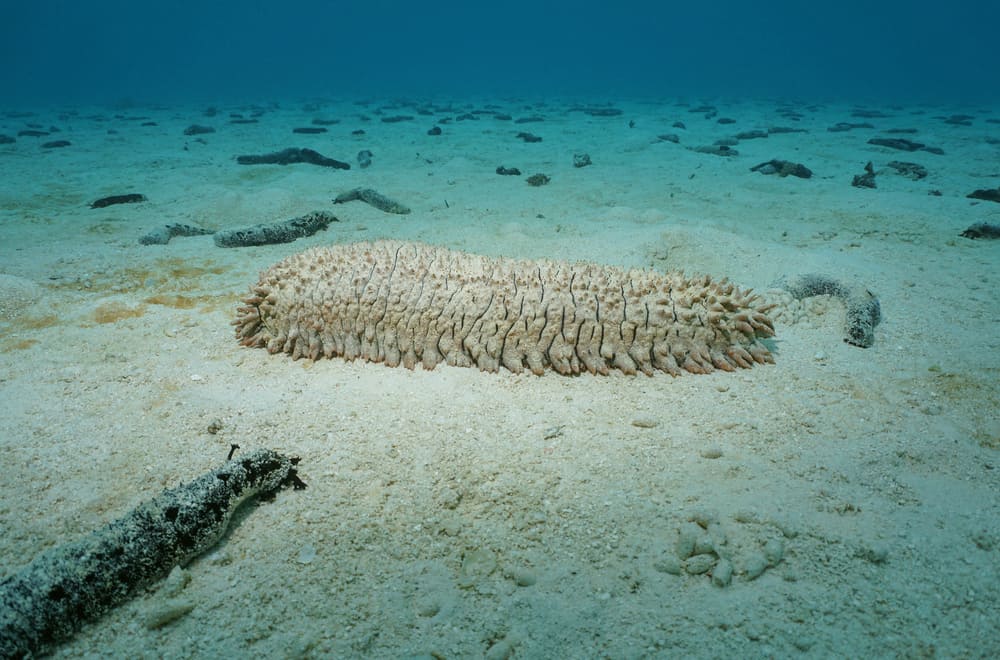 What makes the sea cucumber unique from other echinoderms?

Most echinoderms spines are visible, whereas sea cucumbers have ossicles (small bones) embedded in their skin. These bones provide evidence to the clue of the species identity. You can examine the ossicles under a microscope.

Do sea cucumbers have eyes?

No. sea cucumbers neither have eyes nor faces. They only have a mouth, digestive tract, and anus that aid in th feeding process.

Yes, sea cucumbers can lay eggs. Their eggs undergo external fertilization. Females discharge their eggs into the water, which fuse with sperms produced by males for fertilization.

After sea cucumbers release sperm and eggs into the water, where eggs fertilize, they develop a sea horse-like appearance. Their larvae (offspring) will spend a few weeks suspended in water.

There you have it! The answers to the question, “what do sea cucumbers eat?” and more.

Sea cucumbers may seem like simple organisms, but they play a crucial role in their environments. Also, they are a favored ingredient in Asian cuisines. Their high demand has led to a decline in their population.