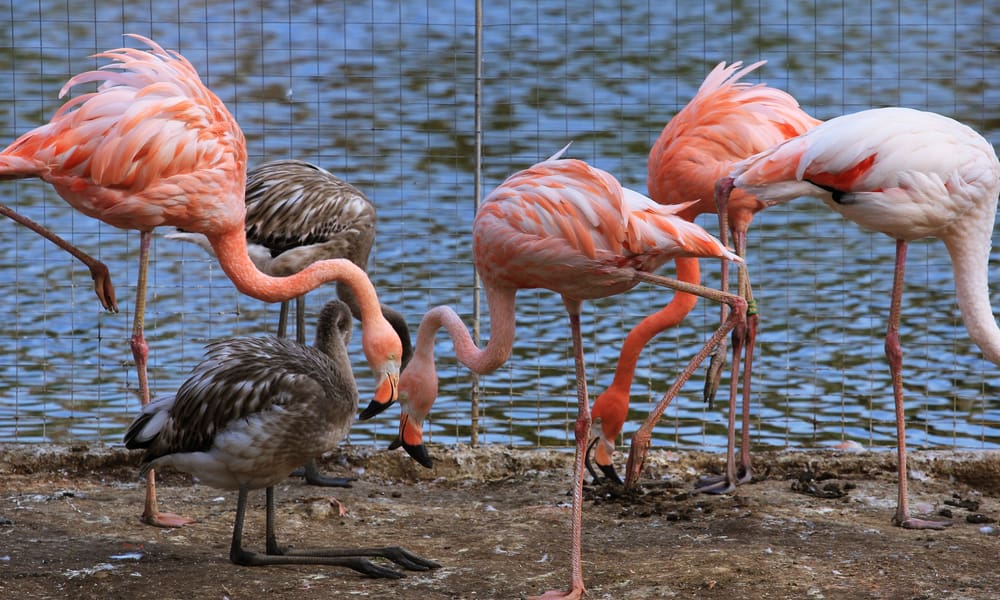 The beautiful flamingo is perhaps one of the world’s most striking and distinctive birds. But just how much do you know about it?

We’re going to take a look at the answers to questions like, “What do flamingos eat?” and “Where do they live in the wild?” And we’ll find out a whole range of fascinating facts about these amazing birds.

So if you’re ready, read on to find out more! 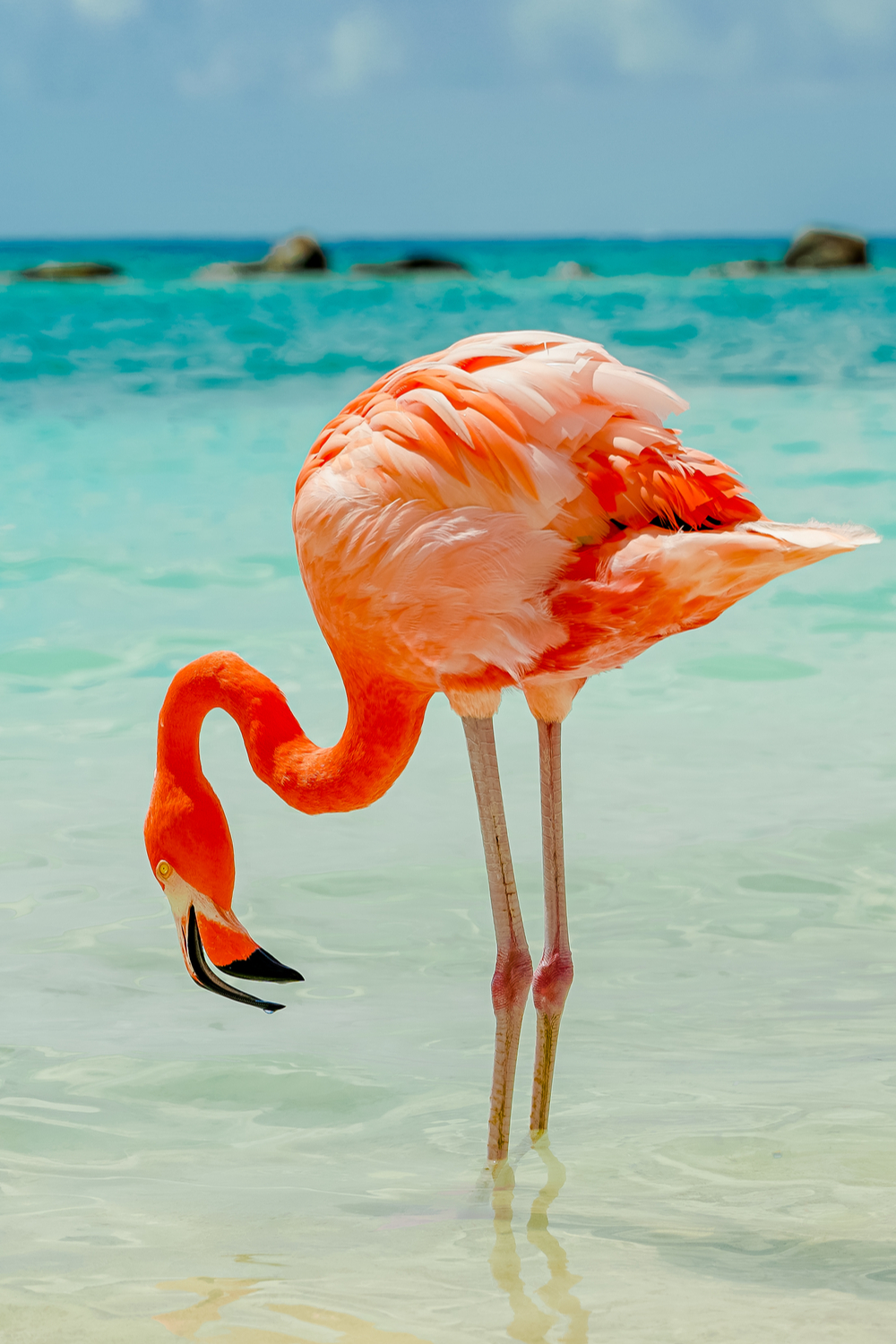 Flamingos are semi-aquatic wading birds, and they’re highly sociable. They live in flocks that can number well into the thousands. If you’ve ever seen a flock of flamingos in flight, it’s a truly awe-inspiring sight. Take a look at this YouTube video from Nature on PBS to see what we mean.

In order to live together peacefully, flamingo colonies have lots of rules. There are defined areas where the birds can interact, such as at watering places. And in other locations, they keep themselves to themselves.

That’s especially the case when feeding. If another bird comes too close when a flamingo is trying to eat, it will be warned off.

The biggest of these species, as you might expect from its name, is the greater flamingo. It can stand between 3.9 and 4.7 feet tall, and weighs as much as 7.7 pounds.

At the other end of the scale is the lesser flamingo. This is still a large bird, however. It stands about 2.6 feet high and weighs around 5.5 pounds.

The different species of flamingo can be found all over the world. You can find populations in the Caribbean, South America, the West Indies, the middle East and India. And Africa is home to huge numbers of both greater and lesser flamingos.

They live around lakes, which can be either salt water or alkaline. Most flamingos don’t migrate, although they will fly shorter distances. They do this to find food, or if there are changes in the water levels or climate in their normal breeding areas.

What Do Flamingos Eat in the Wild? 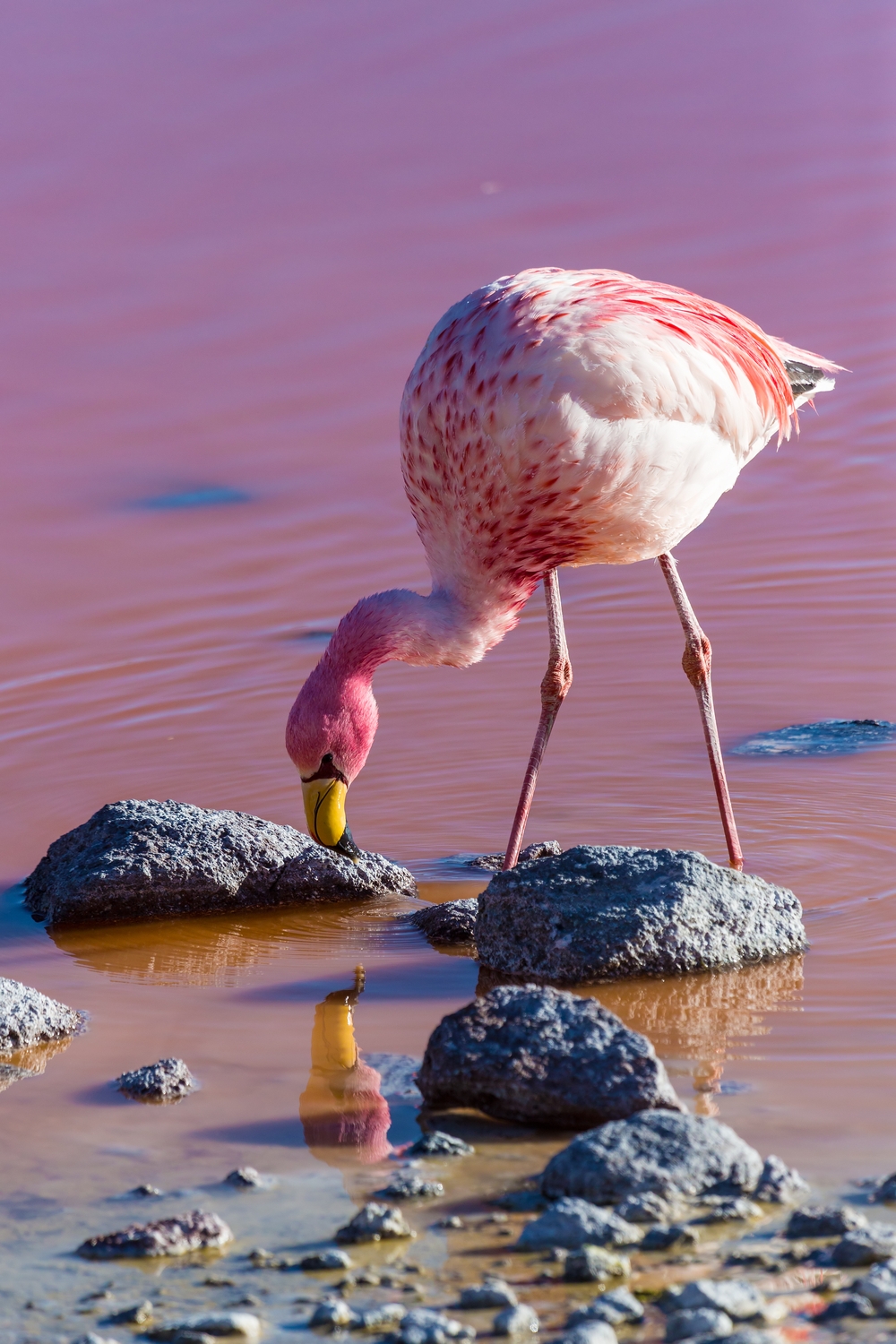 Flamingos have a very peculiar way of eating.

First of all, they wade out into the water, keeping their balance on their webbed feet. Some species then use their feet to stir up the sediment at the bottom of the lake. This sediment often contains organisms that make a tasty lunch.

Then they stick their beaks into the water upside down. In this unlikely position, they suck water into their mouths. They then pump it back out along the edges of their curved beaks. This action filters out small crustaceans and algae, which the flamingo then swallows.

You can see a Caribbean flamingo feeding in this YouTube video from the BBC.

Baby flamingos, known as chicks, however, have straight bills. That means they can’t feed in the same way as the adults.

The parents handle this by producing milk – but not in the same way as mammals. Flamingos make their milk in their throats. It’s known as “crop milk”, crop being another word for throat. They then dribble it out of their mouths for their young.

Let’s take a look in more detail at what flamingos eat.

At the same time, the process of making the milk leaves the parents looking increasingly drab. That washed out feeling will be familiar to many human parents too!

The mix between these different kinds of foods varies between flamingo species. Flamingos with deeper beaks, like the lesser, James’ and Andean flamingos, tend to stick to algae. Those with shallower beaks eat insects and smaller fish and invertebrates too. 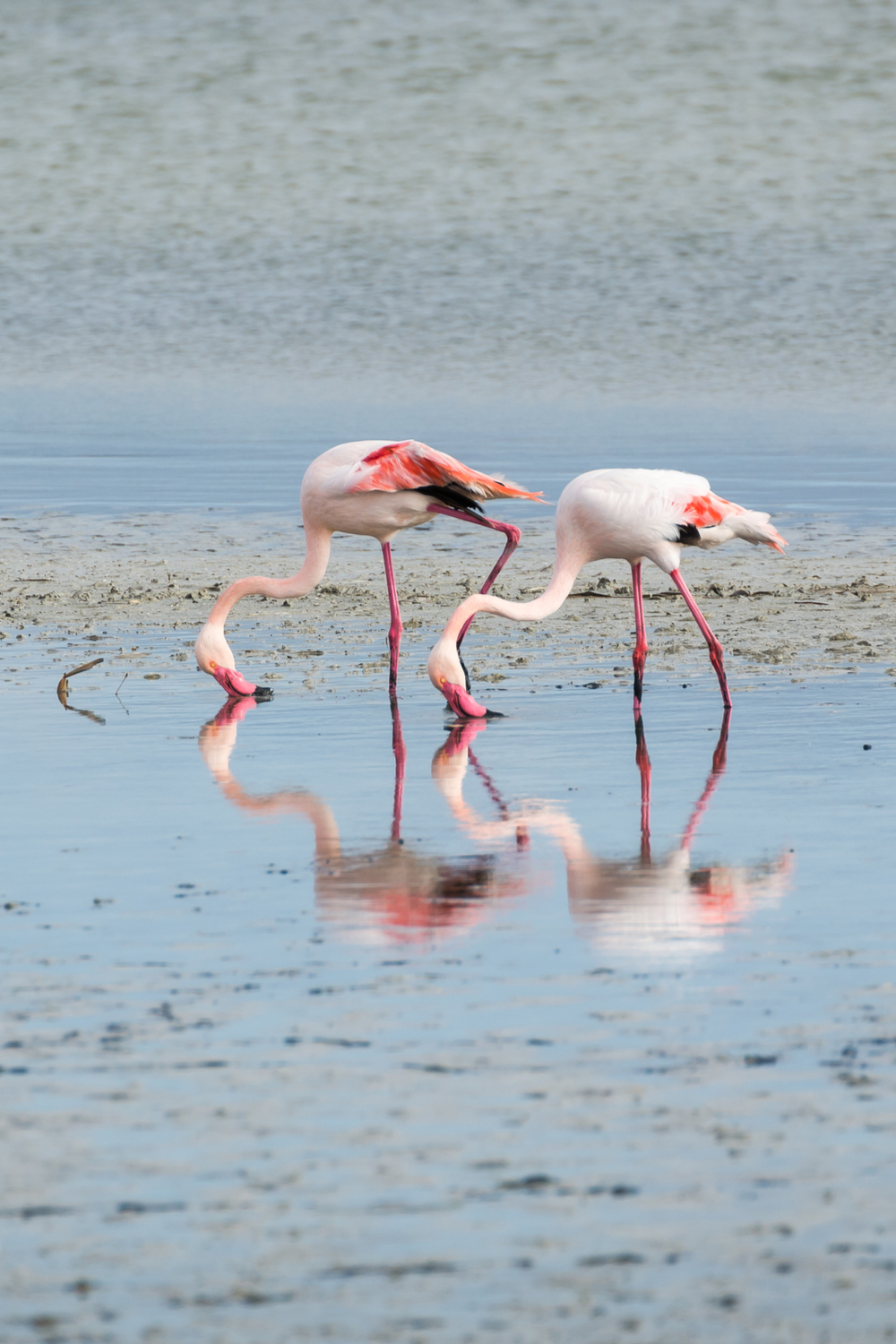 1. The collective noun for flamingos is a “flamboyance”

Flamingos are social birds and they gather in large flocks. But why call them a flock, when you could use their much more colorful collective noun?! A group of flamingos is known as a “flamboyance”. But there are a host of other words too.

You may also hear a collection of flamingos described as a colony, a regiment or a stand. Flamingos in flight may be referred to as a “skein”.

Flamingos are thought to be monogamous. And they go to a lot of trouble to find their mates, performing a frankly hilarious dance to attract them. Take a look at this YouTube video of Chilean flamingos dancing to see what this involves.

These group displays are an important part of the flamingo courtship ritual. It’s perhaps not surprising that once they’ve found a mate, they’re unwilling to go through the whole rigmarole again!

3. Both parents look after their young

Both male and female flamingos incubate their eggs, and both parents produce milk to feed the hatchlings too. In most cases, only one egg is laid at a time. It will take between 27 and 31 days for it to hatch.

After this, the chick will stay with its parents for anything from 5 to 15 days. After that, it’s time to go to nursery! Yes, flamingo chicks go into creches, where they’re cared for by a number of birds. They’ll leave the creche when they’re around 70 days old.

Flamingos reach maturity between 3 and 5 years old, and they can live to an impressive age. In the wild, they live to between 20 and 30 years old. But if they’re in captivity, protected from predators, they can reach up to 50 years old.

In keeping with their sociable nature, flamingos are very communicative birds. They make all kinds of noises, and can be very loud.

They start young, with the chicks performing cute squeaks. Adult birds honk in a way that’s a bit like geese. They’ll also grunt and growl.

These sounds play an important part in keeping flocks together, as well as in mating and other rituals. They’re also used by parents and chicks to recognise each other. And amazingly, different species of flamingos have different voices.

6. Different species are active at different times of the day

Some species of flamingo are diurnal. That means they’re most active during the day. The American and greater flamingos fall into this category.

The lesser flamingo, on the other hand, tends to be crepuscular. You’re most likely to find this species of flamingo feeding at dawn and dusk.

7. The name comes from its color

The word flamingo comes from the Portuguese word “flamengo”. This means “flame-colored” – referring, of course, to the birds’ bright pink feathers.

8. They tend to stand on one foot

Flamingos seems to like standing on one foot – but no-one is sure why. One theory is that they do it to conserve energy. By tucking one foot near their body they keep it out of the cold water so that it stays warmer.

Whether or not that’s the case, the one-legged stance seems to be comfortable for flamingos of all species.

Flamingos spend a lot of time on grooming – between 15 and 30 per cent of their day, in fact. They do this to keep their feathers spick and span. And this includes using their beaks to spread a special oil over their plumage.

It seems this oil acts as a sort of make-up! When exposed to the sunshine, it reddens the flamingo’s feathers.

We hope you’ve enjoyed our answer to the question of “What do flamingos eat?” And there’s so much more to learn about these fascinating birds!

The types of food flamingos eat varies by species. Birds with deeper beaks tend to stick to algae. Those with shallower beaks will also chow down on insects, small fish and crustaceans.

If you’re lucky enough to see a flamingo in real life, take a good look at those gorgeous pink feathers. And remember, they’re all the result of eating algae and shrimp!