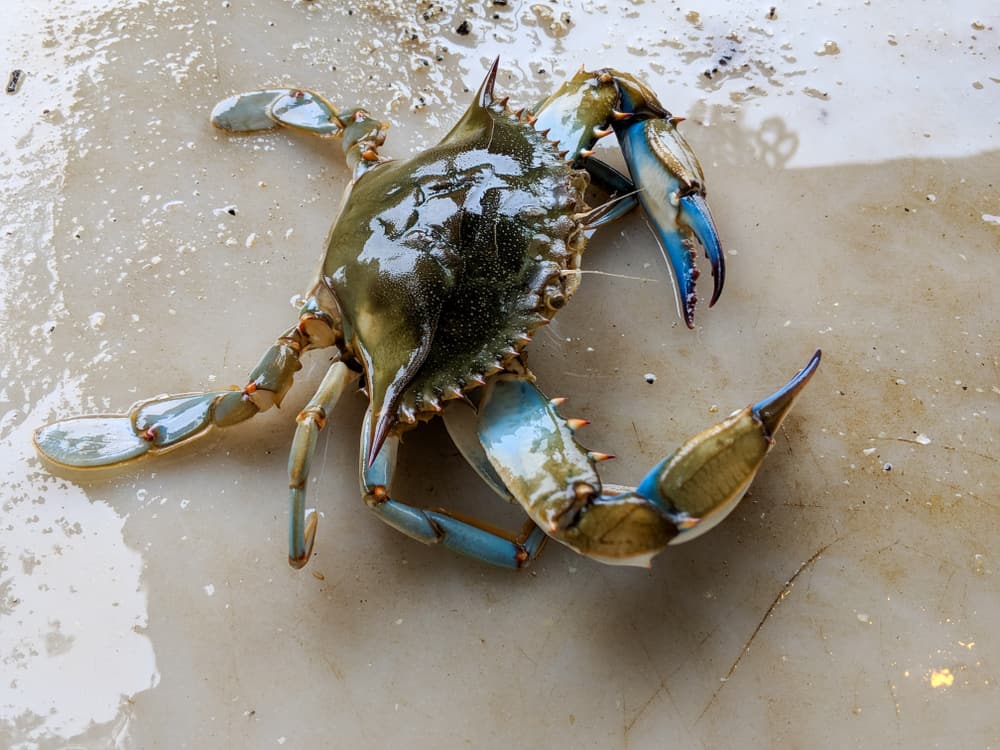 The electric blue crabs aren’t just a popular dish humans enjoy. They actually play a key part in the existence of some of America’s fisheries.

They’re best known for their sapphire blue claws; however, blue crabs actually have a dull blue-colored body. Nonetheless, they look out of this world.

Even their scientific name, Callinectes sapidus, means “beautiful savory swimmer.” You can find these crustaceans on the Atlantic coast, in the Gulf of Mexico, Nova Scotia, and Uruguay.

They’re scavengers and hunters, so they eat other crustaceans, including their own kind, clams, insects, oysters, mussels, worms, and recently dead fish.

In today’s article, I will discuss this shellfish in detail. You will learn about the diet of blue crabs and why they’re valuable for fisheries, so let’s dive in.

The bright blue claws aren’t the only thing unique about these crabs. They have ten legs and olive-grayish blue bodies—the blue color results from the blue pigment alpha-crustacean and the red pigment astaxanthin.

When you cook blue crabs, you notice their bodies turning red as heat deactivates the blue pigment.

Male blue crabs have a larger body and brighter clue claws than females. Females, on the other hand, have red-tipped claws.

You can determine a crab’s approximate age and sex by flipping it over and looking at the shape of the folded surface of the abdomen (apron).

Adult males have a t-shaped apron that looks like the Washington Monument, while mature females feature a rounded apron that reminds one of the US Capitol building.

In contrast, the immature female crab has a triangular apron.

How Long Does a Blue Crab Live?

Luckily, blue crabs have a lifespan of about 3-4 years, and throughout their life, they participate in a large mating ceremony starting in May and ending in October.

Female blue crabs produce millions of new crabs. Not all eggs survive because of predators or other natural factors; thousands remain and repeat the life cycle.

Why Do Blue Crabs Molt?

What Do Blue Crabs Eat?

As I already mentioned, blue crabs hunt and scavenge for food. They even eat their own kind in some cases.

These crabs inhabit the Chesapeake bay, among many other ecosystems; however, this one is the most fragile because of carbon pollution.

Furthermore, if nothing changes, blue crabs will eventually grow larger shells due to the influx of carbon pollution.

Simply put, they will turn larger and more aggressive; hence they will consume more and more oysters. 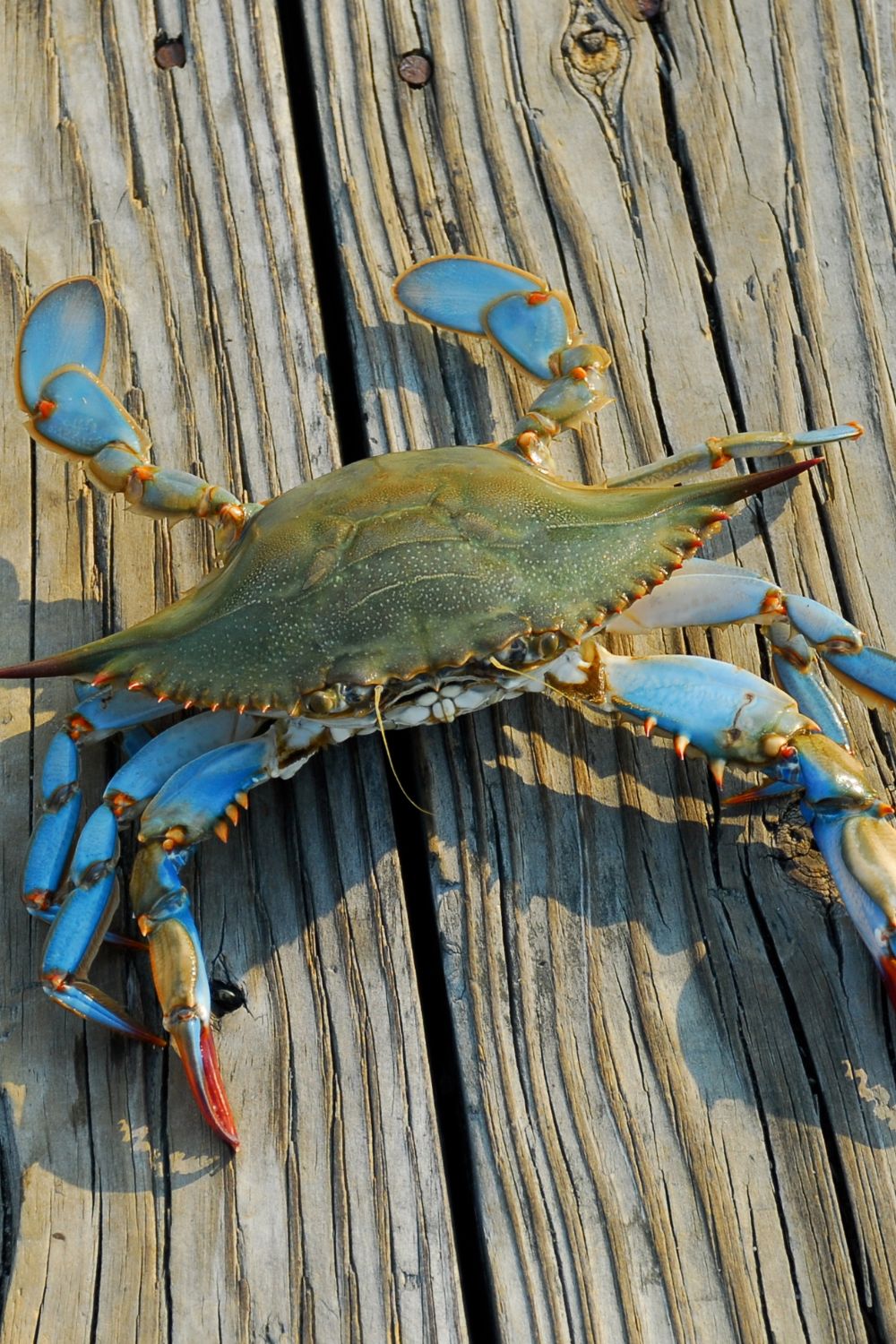 How Do Blue Crabs Eat?

Blue crabs aren’t picky eaters. They eat almost anything they can get their claws on but have difficulty obtaining food because they have to search the area for dead fish or plants.

Let’s learn more about their hunting and scavenging for food.

Blue crabs can’t wait for high tides because, during high tide, when the waves crash further onto the shore, they take action and swim into salt marshes looking for snails and crabs. And snails usually hold on to stalks of grass in salt marshes.

Sometimes, blue crabs aren’t searching for food. Instead, they wait for prey to come to them. They’re silently waiting beneath the sand, showing only their eyes.

Blue crabs catch prey between their claws when something swims or walks past like other crustaceans and snails. Simply put, they can be sneaky in some cases.

Moreover, they control the populations of the animals they eat. Therefore, regions where overfishing of blue crabs takes place experience negative effects on the local ecosystem.

Usually, blue crabs crush the shell completely between their claws.

In animals with two shells that can protect themselves, like oysters and clams, blue crabs slip their claws between the shells and open them up to reach the insides and have a feast.

It seems like blue crabs have detective skills underwater.

They identify and track prey with their vision and sense of touch. Additionally, crabs have chemical receptors that can sense a prey’s chemical scent.

However, researchers found out that tracking that scent depends on water flow. For example, blue crabs can quickly track clams in low-velocity flows but have difficulty monitoring their prey in high-velocity flows. 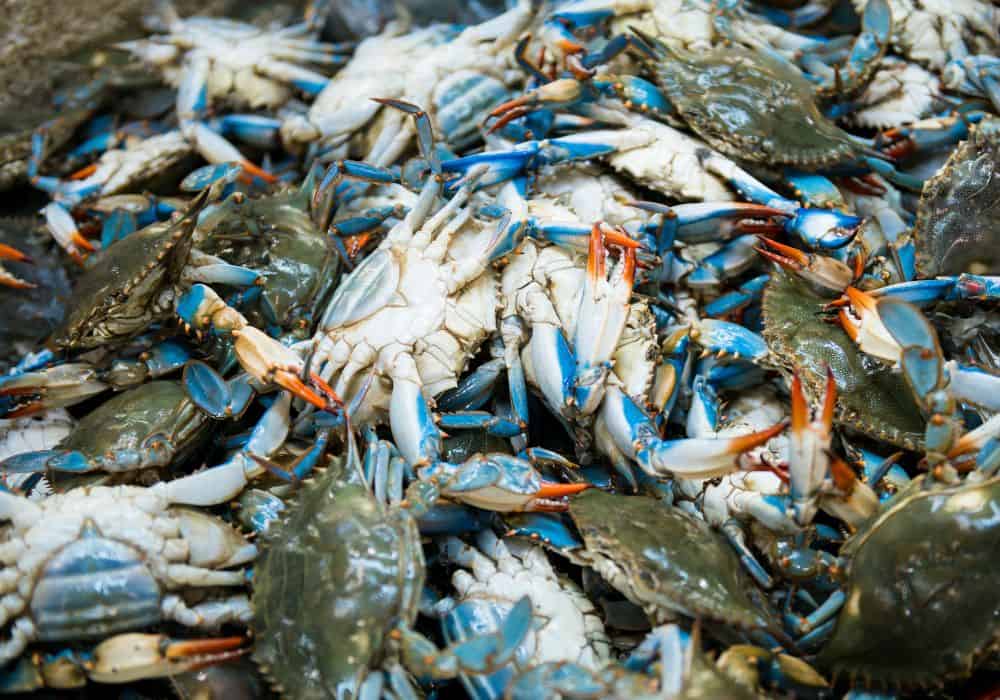 What Does a Blue Crab Need to Survive?

If you come across alive blue crabs, you can keep them alive by storing them inside a cooler. You can also use a bushel basket instead of a cooler if you hold it in a wet, cold, and well-ventilated area.

Remember that you can keep blue crabs alive for about 24 hours out of the water if you keep their storage place cool and moist.

Another thing you should remember is that blue crabs eat unusual things, as they’re scavengers. They can also eat their own kind when hungry.

If you’re keeping your blue crabs on ice, don’t worry about this, but if you don’t plan to eat your crabs by the time the ice melts, you should feed your crabs with alive or dead fish, hard clams, oysters, and many seagrasses.

Toss whatever crab food you find in the container and let your crabs feast.

Moreover, handle blue crabs with great care because they have a strong and sharp grip. They can pinch you hard or break off a leg or claw so they can escape.

Fun fact: Blue crabs can regrow the limbs they break when escaping predators.

Blue crabs aren’t just predators. They’re also prey. So, they play a crucial part in the food web of the Chesapeake bay and other places they inhabit.

The larvae of these crabs also participate in the bay’s planktonic community as food for oysters, menhaden, etc. In contrast, adult and juvenile crabs make food for other blue crabs, fish, and birds.

So, they also control the population of the animals they consume. For instance, blue crabs manage periwinkle populations as they eat snails.

That’s why experts express concern about the decline of the blue crab population in the Chesapeake bay. They fear the lack of these crabs could negatively impact the salt marsh habitat because periwinkle populations eat marsh grasses.

Over the last six decades, these creatures have dominated the fisheries in this bay, with about 1/3 of the nation’s blue crab catch. 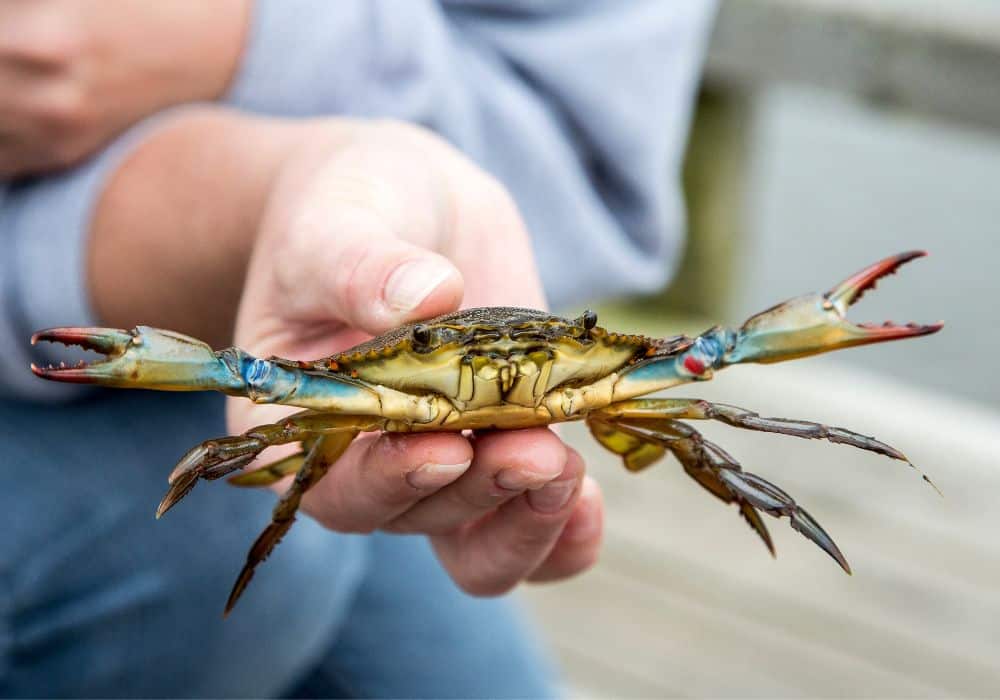 The population of blue crabs varies every year.

The National Oceanic and Atmospheric Administration, the Maryland Department of Natural Resources, and the Virginia Marine Resources Commission join their forces in the Chesapeake bay to conduct stock assessments.

Yearly, Virginia and Maryland run winter dredges surveys to track the population of blue crabs. Afterward, they compare what they obtain with the reference points and bring conclusions.

Blue crabs aren’t picky eaters. They consume clams, snails, plants, mussels, dead or alive fish, and more. If they lack food resources, they will eat smaller, less mature crabs of their own kind.

As I already stated, they’re important for the world because they control populations of fish and other animals they consume.

That’s why during times of overfishing, as has happened in recent years, the lack of blue crabs has negatively affected the ecosystem where they once lived.