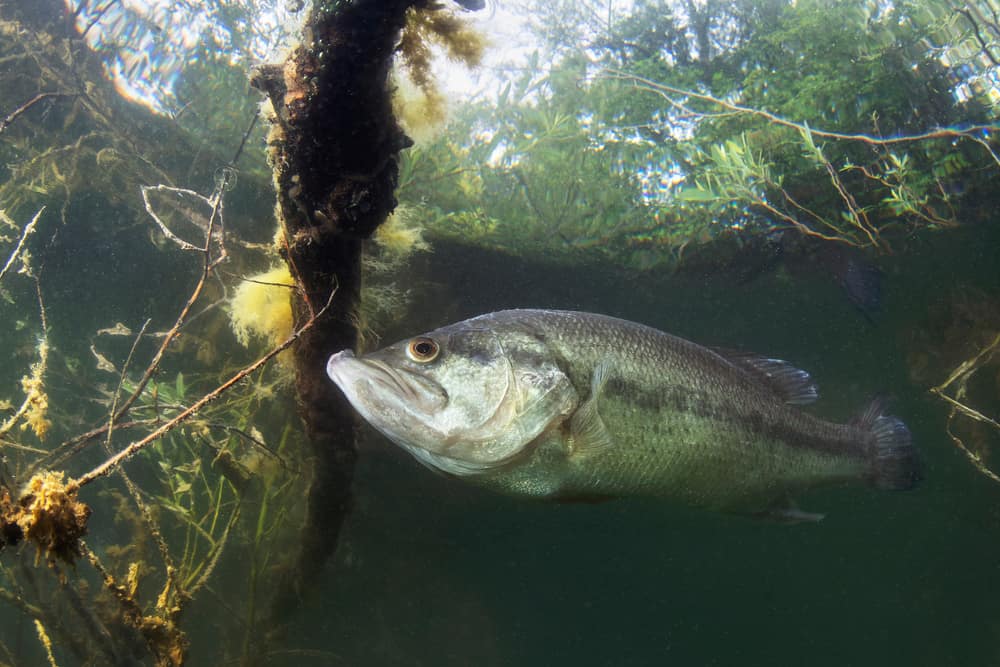 I was interested in learning about the diets different species of basses have, and after learning so much, I decided to write an article about it so I could condense the main points for others. So if you’ve recently thought “what do basses eat,” this article is for you!

1. The Physical Characteristics of Basses

While many species fall under the classification “basses,” there are physical characteristics that distinguish these species from one another.

For the most part, largemouth basses are dark green or olive-colored, though they do sport a yellow underside. They also feature a stripe made of dark splotches, and this runs from the operculum to the base of the caudal fin.

Black basses are for the most part charcoal-colored, though the smaller ones are usually more of a dusky brown. They also have an underside it’s paler than the rest of their body.

Although white basses are for the most part silvery-white, the dorsal part of their body is black. There are also narrow, dark lines on their bodies. A white bass’s mandible protrudes and will extend to the middle of the eye.

As far as length is concerned, white basses tend to be 212 mm at age one, 364 mm at age two, 401 mm at age three, and 426 mm at age four. Generally, females are larger than males, and white basses have over a dozen rays on their fins like other species of bass. 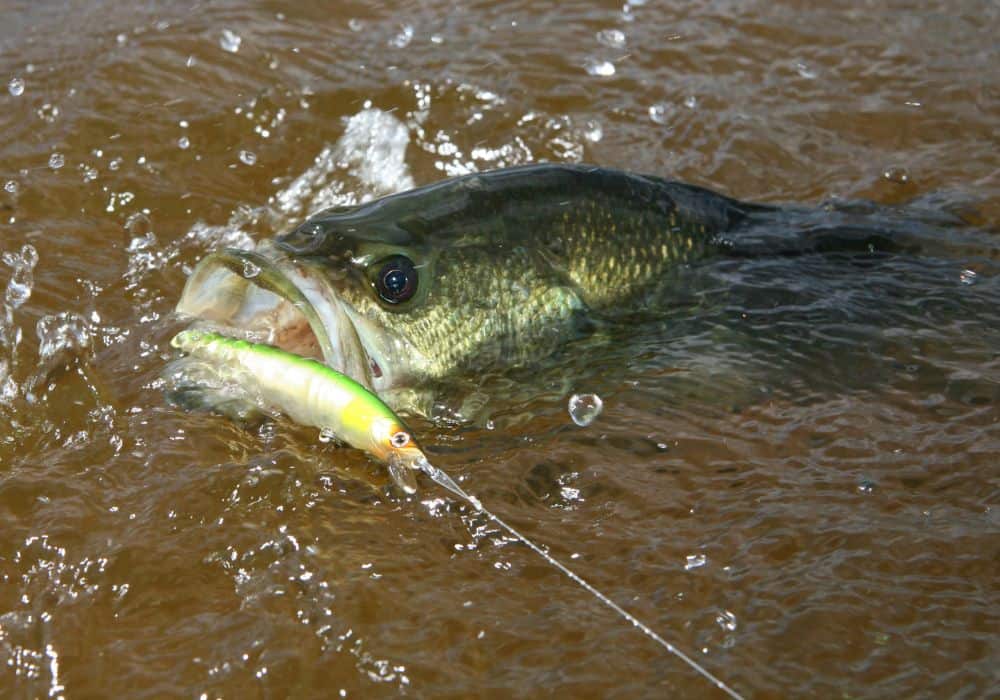 One of the most widely distributed species of fish in the world, largemouth basses can be found in most of the world’s major bodies of water. Specifically, their range includes the US, Europe, Lebanon, Africa, Japan, New Zealand, and the Philippines.

As far as the United States is concerned, largemouth basses used to mainly populate the Atlantic ocean along the eastern coast, but now largemouth basses can be found in swamps, lakes, reservoirs, creeks, and rivers within the country.

They prefer water that’s between 81 and 86°F, and usually, they don’t go lower than 18.8 feet. Largemouth basses feed in shallow water in the evenings, and then they return to deeper water to rest.

Black basses are found within the boundary which links the eastern part of the Rocky Mountains to Canada’s Hudson Bay and the northeastern part of Mexico.

They are found in both still and running water, and they can live in environments with or without aquatic vegetation. They live in both shallow and deep water, and they prefer the water temperature to be between 20 and 30°C. Generally, black basses live for 8 to 10 years.

The global range for white bass is about 2,500,000 km. This species of bass is native to the Great Lakes, the Mississippi River Basins, the Rio Grande, and many other well-known bodies of water.

White basses like to live in large bodies of water, such as deep lakes and clear rivers. White basses prefer reservoirs over natural lakes and rivers, and they thrive in habitats where there’s still water and plenty of vegetation. White basses can live for 10 to 15 years. 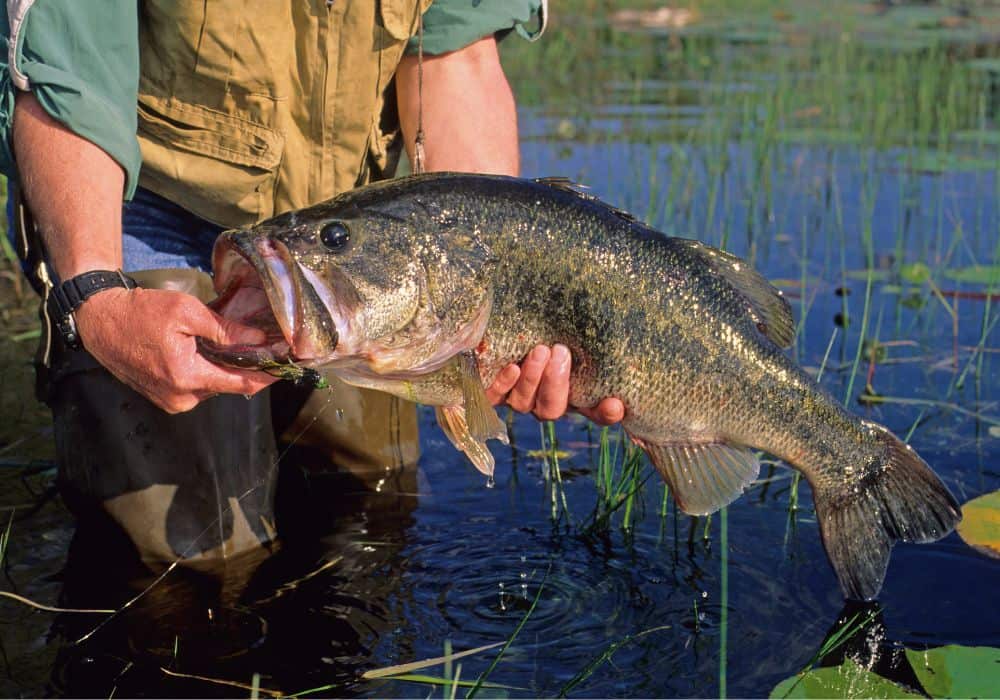 A bass’s diet is largely determined by its habitat. That being said, different species have different diets, and I’ll address diet (according to species) in a later section.

In this section, the diets of wild and captive basses are compared, and I also detail the diets of baby basses.

A wild bass will consume a range of organisms in its habitat, but it’ll never eat plants. Wild basses are known as “opportunistic feeders,” which means they’ll pretty much eat anything they come across.

In the wild, basses will eat shrimp, crabs, clams, worms, plankton, frogs, snakes, and a range of smaller fish. Wild basses even eat lizards and baby birds here and there.

A bass’s size is largely what determines what it can eat, i.e. a smaller bass isn’t going to be the one consuming a baby bird.

A captive bass—that is a bass that’s kept as a pet or for an exhibit at a zoo, aquarium, or sanctuary—will consume most of the organisms a wild bass consumes.

Captive basses tend to get less variety in food because of the enclosed nature of their habitats, but they do get to enjoy food that’s specifically for captive bass.

Captive basses can also be taught to eat fish food, whether it’s flakes or pellets. And since modern zoos and aquariums do a great job at creating artificial habitats for sea life, captive basses get to enjoy staples of their wild diet even while in an enclosed space.

A baby bass’s diet is largely different from the diet an adult has. Specifically, a baby bass will feed on insects, plankton, and small crustaceans. But like the adults, a baby bass will eat whatever fits in its mouth, yet they too are averse to eating plants.

4. What Do Different Types of Basses Eat? 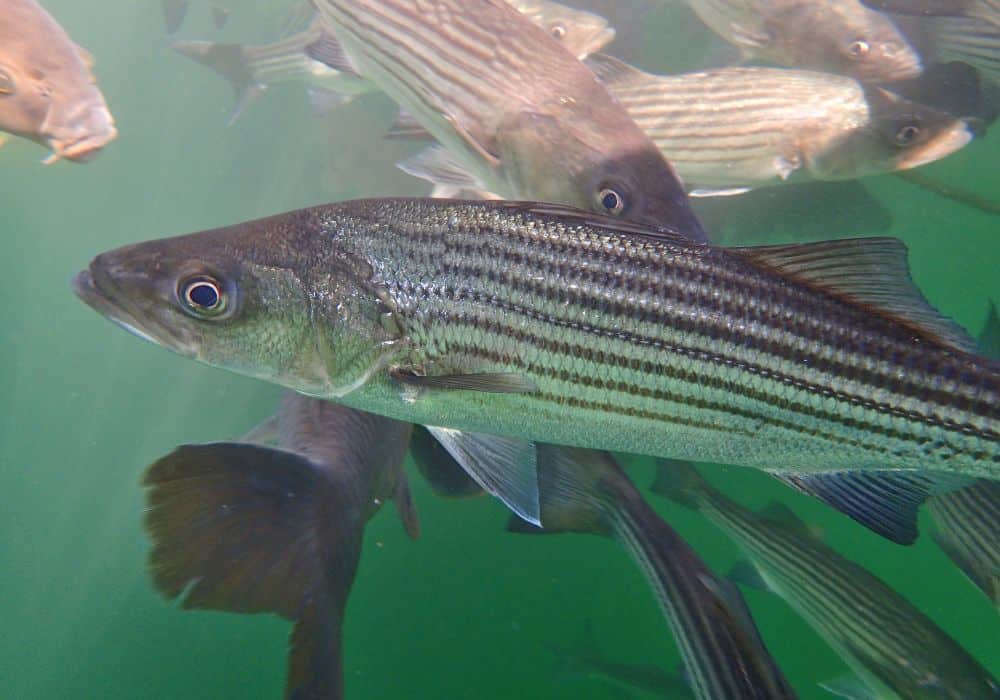 Largemouth basses are incredible predators, as they can consume organisms that are more than 50% of their size. They’ll eat anything in sight that isn’t flora, and they particularly enjoy dining on small fish like shad, sunfish, and yellow perch.

Largemouth basses can also eat the young of larger fish, such as catfish and trout. They will also eat crustaceans and worms. This species of bass has a wide diet because of the habitats in which its found.

In part because of their mouth construction, smallmouth basses have a less diverse diet, one that includes plankton, insects, small fish, and a range of crustaceans. They also feed on insects, amphibians, and the offspring of other smallmouth basses.

And unlike largemouth basses, smallmouth basses can’t consume an organism that’s more than 50% their size.

They also consume a range of crustaceans, including lobsters, crabs, soft clams, and mussels. Sea worms and squid are also on the menu for striped bass. 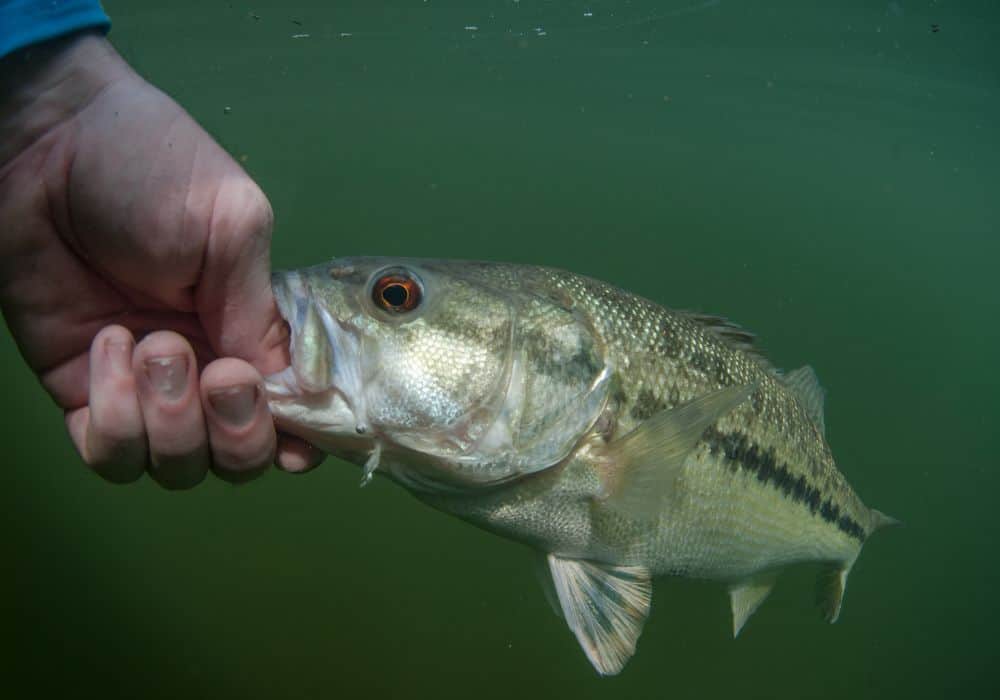 A baby spotted bass will tend to eat smaller organisms like copepods and plankton, while the adults will feed on small fish and even the offspring of larger fish. Their diet is a cross between the largemouth and smallmouth bass diets.

Adult black bass will eat anything that’s available to them, including fish, frogs, salamanders, snakes, and crustaceans. They will even eat small mammals and birds.

Even a turtle can find its way into the belly of a black bass. A baby black bass will stick to eating small organisms, whereas the adults will eat the larger ones.

5. Do Basses Change Their Diet Seasonally?

Basses will begin to eat a lot before the spring spawning season. This is because for 10 to 14 days while spawning, they will not feed. When the water warms, a bass will consume things that are high in protein, like crawfish, so the eggs it helps to create are strong.

During the spawning phase, a bass is more defensive, and it won’t seek food but rather consume what it comes into contact with, which may be bluegills, crawfish, crustaceans, amphibians, and bream. Even small turtles can be prey for a bass.

Basses don’t tend to act as predators during spawning. Actually, they’re protectors, keeping predators away from their eggs. Some other factors that determine how much a bass eats are:

In many places, during the winter months, basses can’t consume a lot of food, mainly because there’s not as much around. 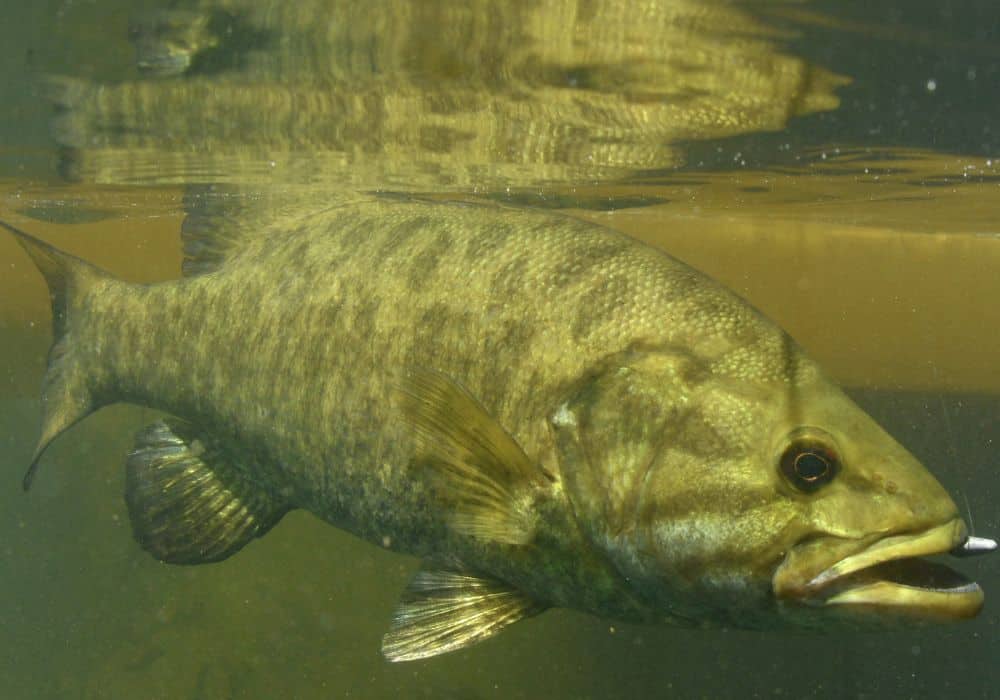 Studies have found that a largemouth bass will consume as much as 5% of its body weight daily. This means that a bass which weighs 10 pounds will consume about half a pound of food on a daily basis.

Of course, different species have different eating habits, and these are largely influenced by factors such as habitat and body size. But sometimes a bass will try to eat something that’s too large, and in this case, it’s likely the bass will fin up to the surface.

A bass can go three days to a week without food, and during spawning, they can go as long as two weeks without food.

7. What Not to Feed Basses?

You can pretty much feed a bass anything that isn’t a plant. That being said, you should stick to giving this fish staples of its main diet, which are small fish, crustaceans, insects, amphibians, and crayfish.

You shouldn’t feed a bass a larger fish, as they may not be able to consume it, and you should also refrain from feeding a bass organisms that it wouldn’t eat in its natural environment. As far as fish food is concerned, you can give a bass both pellets and flakes.

There are many kinds of basses swimming around in the world’s oceans, lakes, and rivers, and the different species of bass not only share certain characteristics but dietary habits as well. Most basses will eat small fish, aquatic insects, amphibians, crustaceans, and even small mammals and birds.

If you’re trying to catch some basses on a fishing trip, or you’re looking to the basses that are in the lake behind your property, it’ll do you a world of good to know what kinds of foods basses eat.

Remember that habitat, size, age, and other factors collectively determine what, when, and where a bass will eat.

You can use live bait like shiners, minnows, and shads as basses bait. Crawfish also work well as bait. It’s best to get a bait that mimics a bass’s prey.

Baitfish work well in both freshwater and marine environments, and baitfish a particularly preferred by larger basses. To lure in a big bass, try using a big worm or a punch bait.

2. What Do Basses Eat the Most?

Basses will eat crustaceans and smaller fish for the most part, though they eat virtually everything they can. In general, a bass’s favorite food is anything that’s smaller than they are.

In most bass-friendly habits, a bass will consume crabs, shrimp, clams, worms, and even lizards on a day-to-day basis.