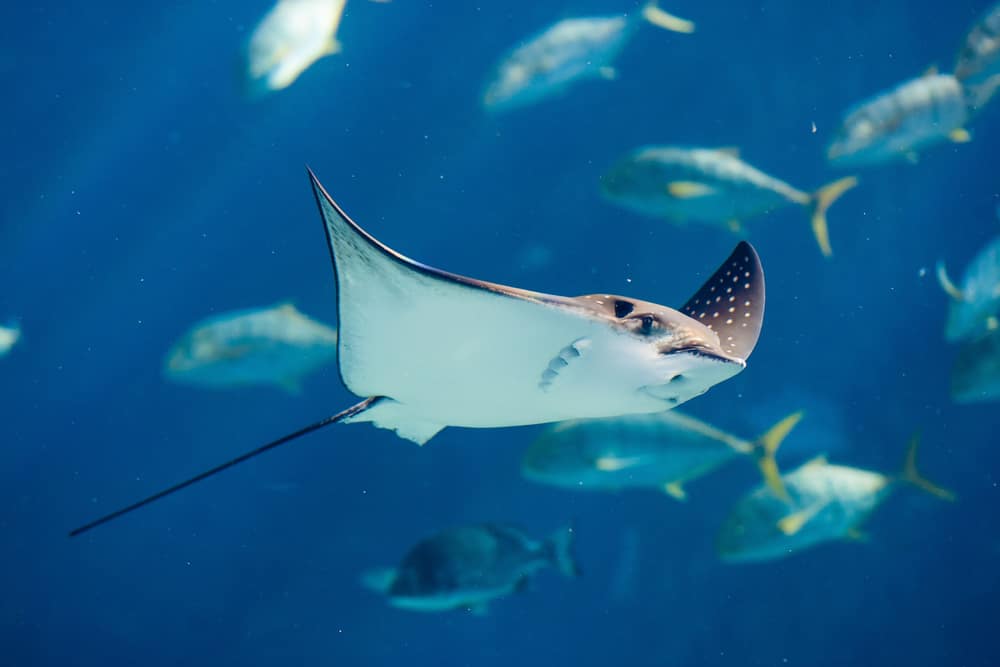 Like sharks, manta rays belong to the group elasmobranch and are considered the least-known elasmobranch. According to a study from Australia, these marine animals are filter-feeding.

Although we see them often in ocean parks, information about them is based on observational studies. To learn more about manta rays, we will discuss in this article some facts about them, what food they eat, and their current conservation status.

Also known as Pacific mantas and giant Atlantic mantas, these marine animals are large rays related to sharks. They are one of the largest fishes with broad flattened grills that belong to the group elasmobranch.

According to the National Oceanic and Atmospheric Administration (NOAA), manta rays also have an internal skeleton of cartilage. The word “Manta” means blanket or cloak in Spanish, defending the characteristics or physical appearance of these marine animals:

Generally, the average manta ray’s body size is around 15 feet., and may come in two colors such as chevron and black. The dorsal side of manta rays is darker and the ventral side is mixed with black and white spots.

Also based on the NOAA, these spot patterns on their bellies are used for identification.

There are two main species of manta rays and in this section, we will elaborate on these species and how they differ from one another. 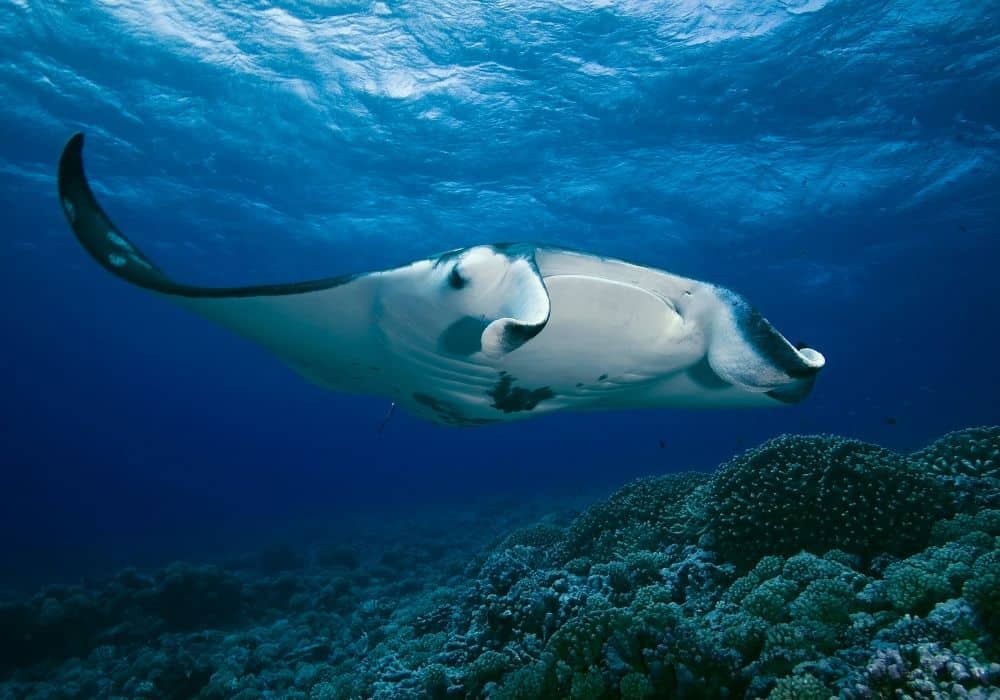 Also known as giant manta rays, this species can be identified because of its casual thorn and rough skin texture. According to the Florida Museum, this species was the first species known, discovered in 1978.

Manta birostris is usually found in offshore islands or mid-waters of reefs at depths of around 120 meters. According to a study from the Journal of Fish Biology, giant manta rays prefer warmer waters because food sources are more abundant.

Their behavior includes staying on those surfaces for a considerable time. When they move out, they swim by flapping their pectoral fins. 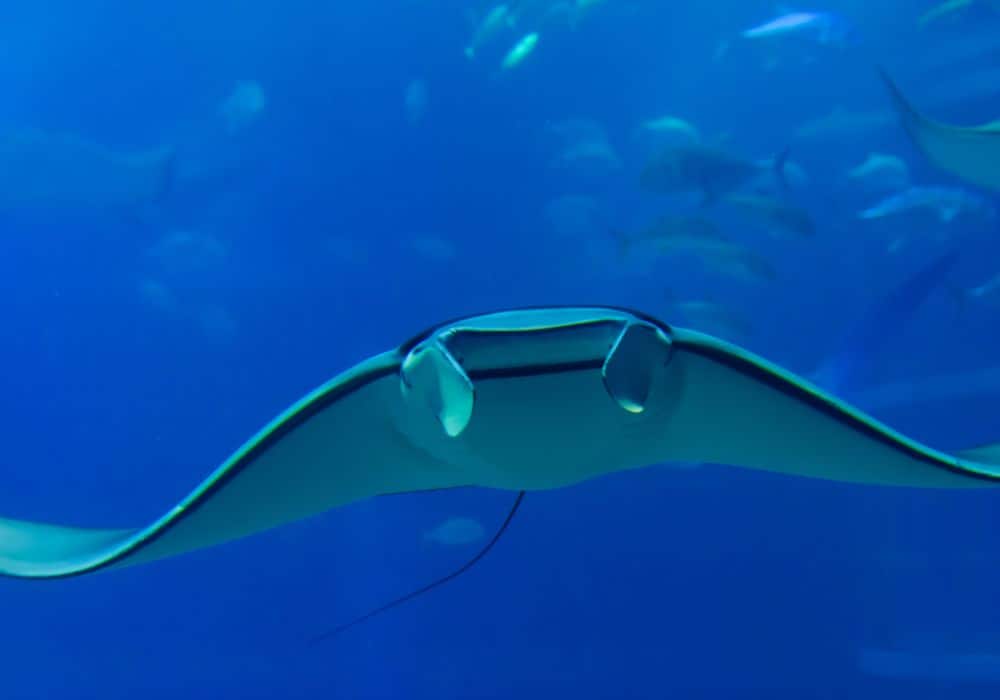 Manta alfredi or reef manta rays are smaller than the first species discovered. According to National Geographic, it was in early 2008 that this species was discovered.

Based on researchers from the USA, Saudi Arabia, and France, reef manta rays prefer near-shore tropical and subtropical waters. Additionally, this choice is associated with mating, food abundance, and currents.

When reef mantas are in these locations, their movement is limited. At night, these manta species are reported to be moving into deeper waters.

Courtship, Reproduction, and Lifespan of Giant Mantas and Reefs

Then, a male manta will insert one of its claspers into the vent of a female. Mating will then last for several minutes until the male manta releases the female.

Both species of manta rays can only breed for up to 5 years. This is the reason why they can become extinct easily. If you wonder how you will know that mating has been successful, there are bite marks left in female manta rays.

Additionally, the gestation period of manta rays is around one year. When female manta rays give birth, they typically bring out 1-2 pups. Research suggests that manta rays come with a very low reproduction rate but the mortality of the pups born is low as well.

In terms of lifespan, manta rays are thought to live up to 40 years.

What Do Manta Rays Eat? 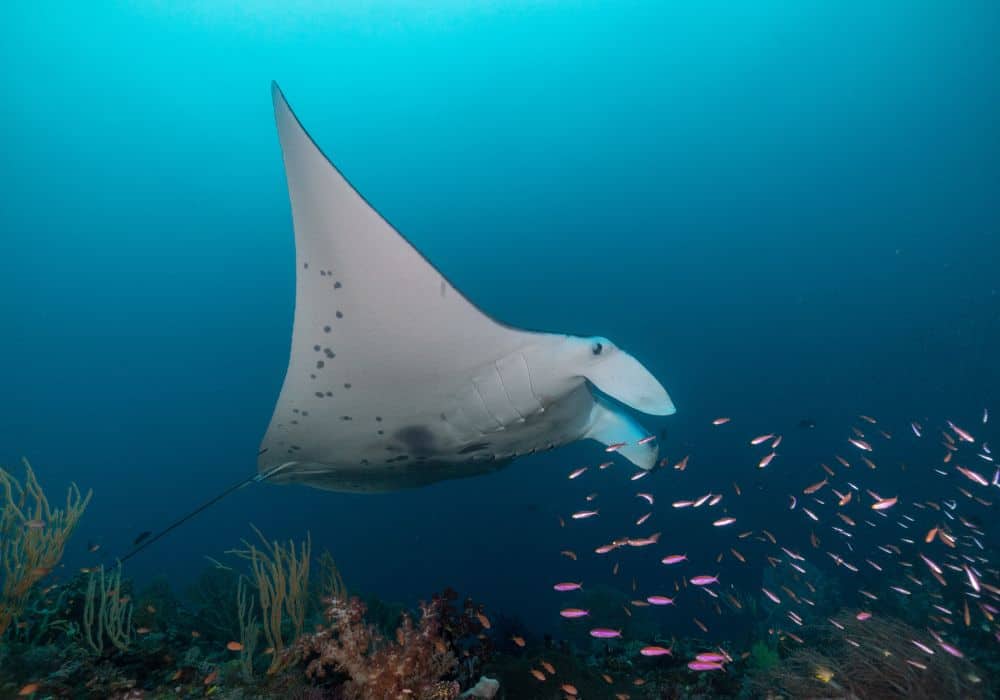 There are areas that manta rays consider as their feeding stations. Again, this is one of the factors in how they choose their habitat – depending on the abundance of food sources. But, what are these food sources?

Like the largest mammals, blue whales, manta rays feed on zooplankton. Some of these abundant microscopic organisms include krill and mysid shrimp. Other prey these marine animals also consider include the following:

Aside from small food, manta rays also feed on medium-sized fish. Interestingly, they can eat up to 5 kgs of these foods per day.

As cited from one study in the USA, Manta rays are filter feeders. This means that they filter the food they eat through their gill plates and by using cephalic fins that resemble horns. They also follow feeding strategies which will be discussed below.

One study from the UK and Australia also reports that mantas follow another feeding strategy called cyclone feeding. This technique involves creating a vortex to gather the tiny creatures which they are targeting. 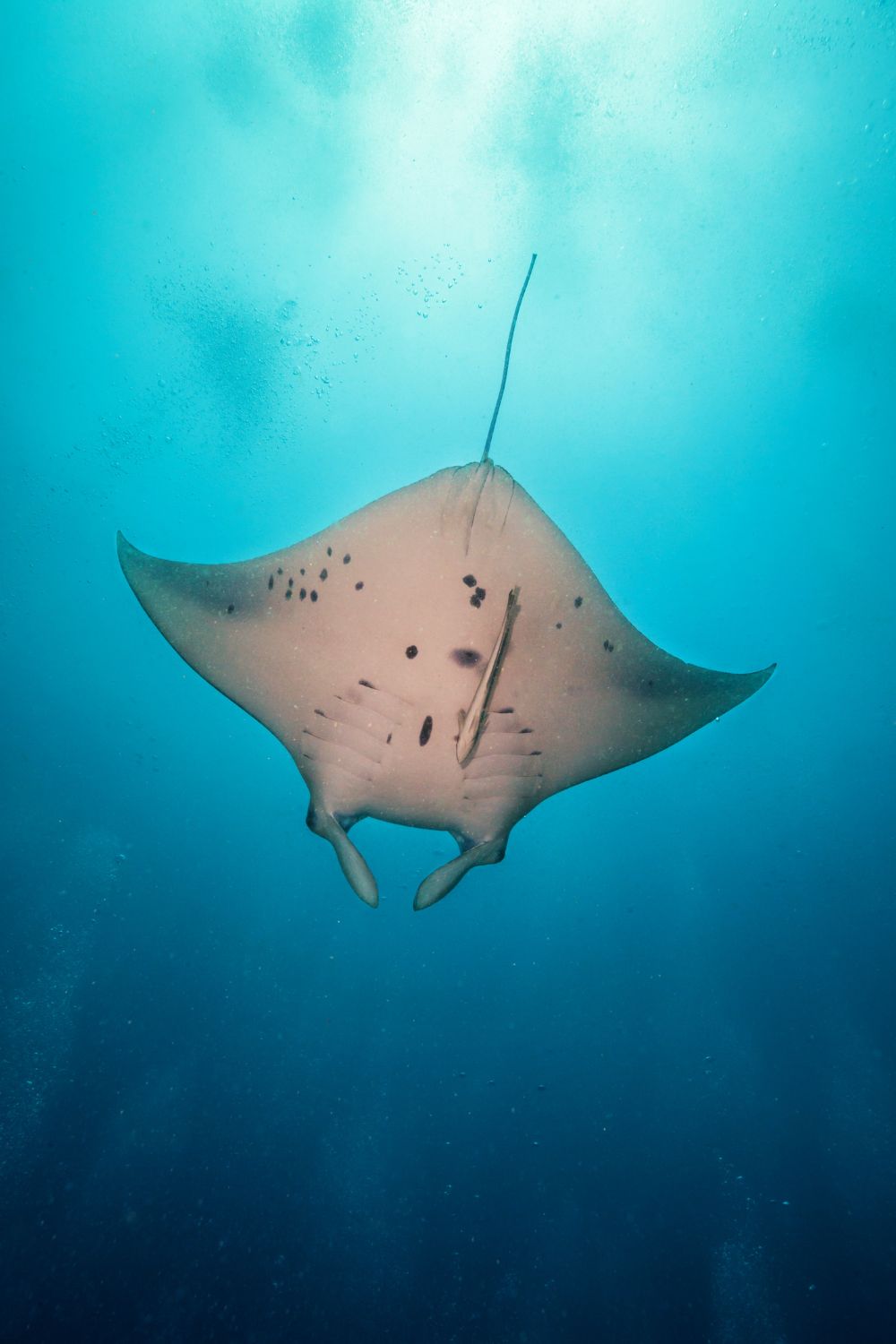 The extinction of manta rays depends on certain threats and other marine animals that prey on them. Consistent with a study from Canada, the population of mantas is slowly declining.

The biggest threat to manta rays includes fishing and harvesting for commercial purposes. According to the International Union for Conservation of Nature, the manta flesh from the wing and rears are usually used to make medicinal products, specifically in Chinese medicine.

Aside from human threats, climate change and global warming can also impact the extinction of these marine animals. Remember that the main food source of manta rays, plankton, prefers cold waters.

Thus, when ocean waters get warmer due to climate change, the life cycles of plankton can be reduced, causing their availability to drop. Eventually, because of this food source reduction, the diet and overall habitat of manta rays are affected negatively as well.

Mantas do not have many predators because of their large size. However, their population growth may also depend on these predators. According to a report from New York, mantas follow predator avoidance to keep them alive.

Even though mantas are big, there are still manta-eating fish in the oceans that take them as prey. Some of these shark species include bull sharks, whale sharks, great white sharks, great hammerhead sharks, gray reef sharks, and tiger sharks.

According to the Marine Ecology Progress Series, 93% of mantas being preyed on by sharks are attacked from the side or behind.

Also known as orcas, these whales are also considered predators of mantas. There are some reports that the slow movement and defenselessness of mantas are the reason why orcas, especially the young ones, use them as prey. 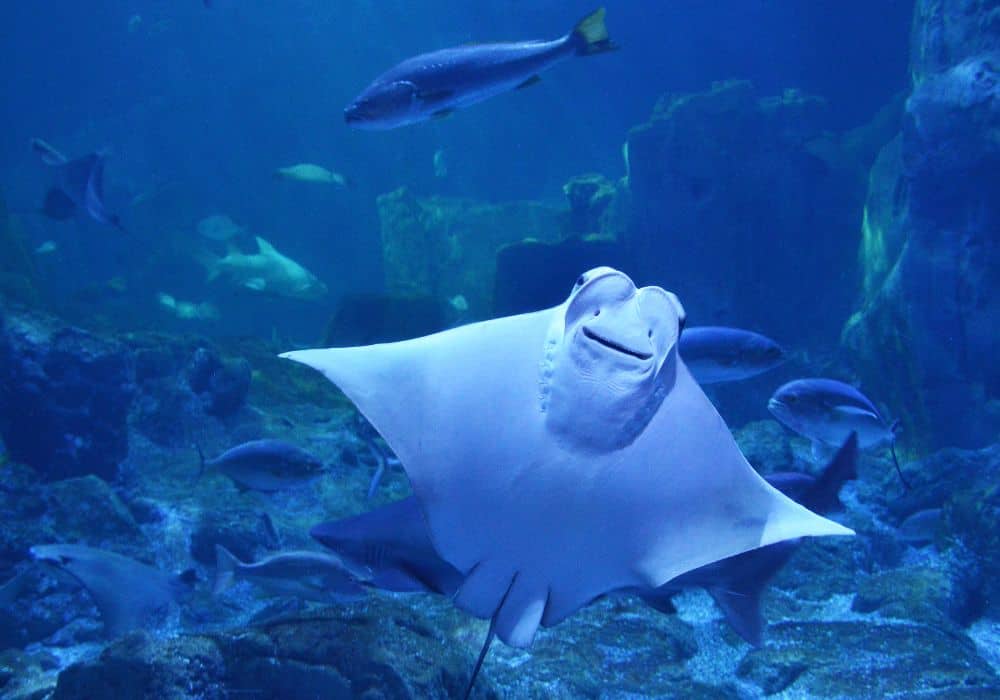 Both manta rays and stingrays are smart like dolphins and elephants. However, there are still some differences between them.

Aside from the latter being half the size of mantas, their differences rely on their diet and feeding behavior, lifespan, temperament, and mating rituals. To understand the comparison better, take a look at the information about stingrays below:

Furthermore, mantas are considered gentle giants and so are stingrays. This is why even remoras feel safe when these animals are around. However, when stingrays are cornered, they become aggressive.

Do Mantas Have Sting Barb?

If you know Australian Zookeeper Steve Irwin, he died in 2006 because he was stung by a stingray. During that time, Steve Irwin’s shadow was mistakenly taken by a stingray as a tiger shark.

Although it is extremely rare for a shy fish like a stingray to kill humans, there is always a possibility. But, how about mantas? Can their barb sting you?

Mantas are stingless. This means that they do not harm humans. The only harm they can unintentionally do is that, because of their big size, they can damage small boats!

New Zealand and Other Countries that Ban Manta Fishing

The New Zealand Department of Conservation has placed fishing bans for mantas to protect their extinction and population. Aside from New Zealand, other countries that followed this conservation technique include the following:

Aside from not supporting manta rays products, if you want to help conserve mantas, you can join New Zealand’s approach by clicking this link.

Indeed, manta rays play an important role in the marine ecosystem. Initially, there was one reported manta ray genus but after some centuries, two distinct species were finally identified.

These species are named manta alfredi and manta birostris. Although they belong to one group, both of them come with some differences, specifically in their preferred habitat.

Furthermore, mantas prey on plankton and krill. However, certain threats, including climate change that affects the population of these prey, can also affect the extinction of manta rays.

Lastly, unlike stingrays, manta rays are harmless. However, being around them still requires care.