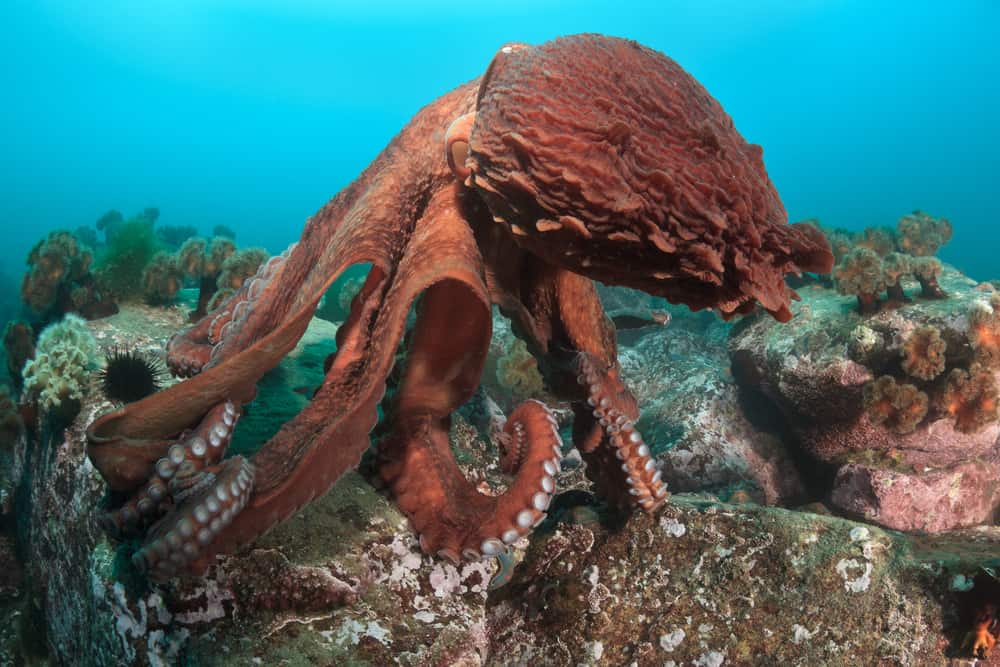 The ocean is full of many fascinating marine beasts but few have puzzled scientists as much as Architeuthis dux, the Giant Squid. These mysterious crustaceans are said to be the largest invertebrates on the planet, at least as far as length is concerned, and one of the largest animals overall.

And while there is a lot of evidence gathered about them, especially during the last decade, there are still more questions than answers about these interesting animals. So, let’s go over what do giant squids eat and some other fantastic facts about these mysterious animals.

Where do they live? 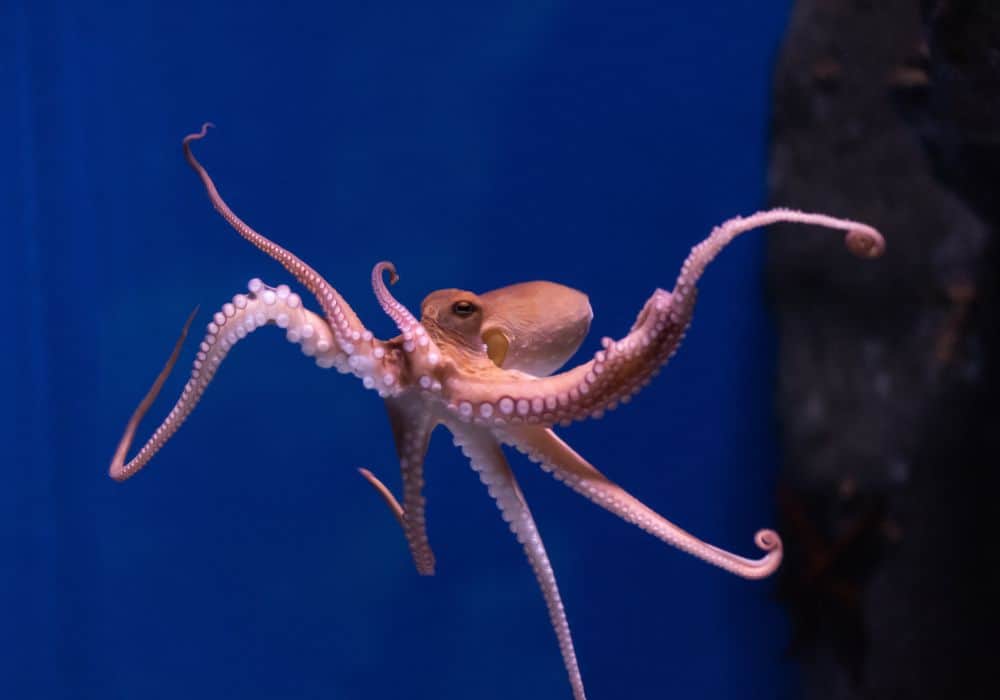 The natural habitat of the giant squid is not fully known as we haven’t yet mapped nearly enough of the ocean floor to know what lives where. However, we do know where we’ve found most giant squid carcasses throughout history – across the western and eastern coasts of the Atlantic, near southern Africa, all around New Zealand, and many other islands of Oceania, as well as other locations all across the globe.

This would indicate that giant squids can be found virtually all across the world’s oceans.

How big is a giant squid?

The largest giant fish found to this day was as long as 43 feet or 13 meters. The longest mantle length (no legs and tentacles) was 7.4 feet or 2.25 meters. As for their weight, most adults tend to weigh around 440 pounds or ~200 kg with some rare specimens being reported to weigh nearly a ton.

The behavior of giant squid

Like other squids and octopuses, the giant squid seems to be an intelligent and careful animal. A big reason why we’ve had major difficulties catching them on camera isn’t just because they live deep underwater but also because they seem to know to avoid the engines and lights of boats.

Yet, this instinctive defensiveness is counteracted by their opportunistic hunting instincts. So, a hungry giant squid won’t hesitate for long to go close to the surface when it just has to find something to eat.

What do giant squids eat? 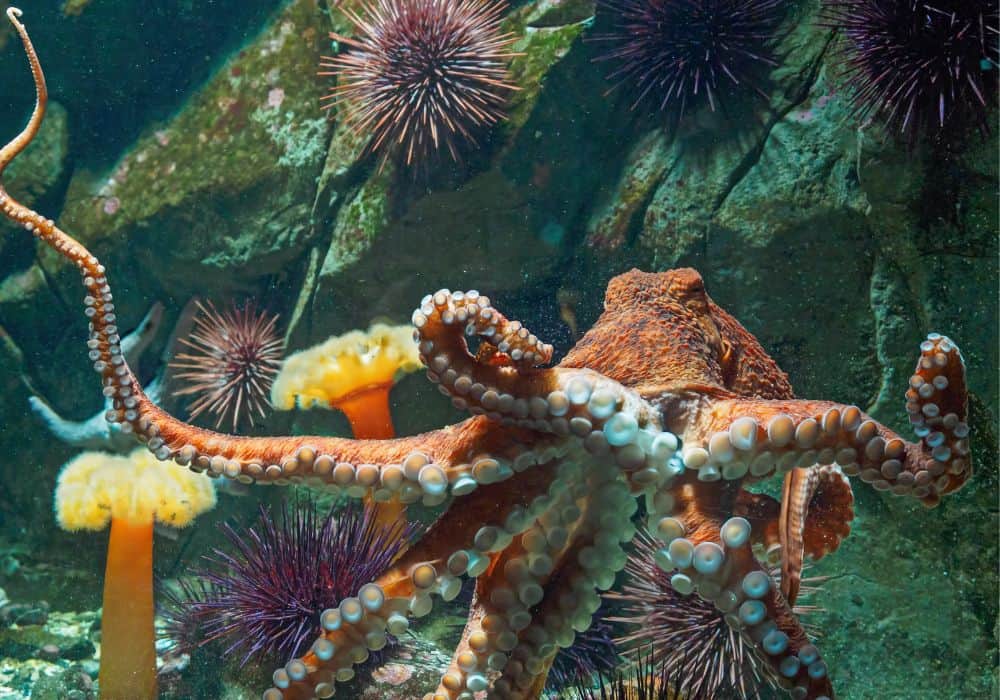 As carnivores, the usual prey of giant squids includes deep sea fish, young sharks, other smaller squids, including smaller giant squids, and virtually anything that moves underwater the squid can safely wrap its arms around and consume with its beak.

How do they hunt and eat?

We know that giant squids rely on their eyesight to hunt, else they wouldn’t have such giant eyes. Aside from that, however, we don’t know exactly how strong their sense of smell or other senses are. Regardless, once a giant squid lock onto its prey, it will typically charge in with its tentacles forward, grab its victim with its two feeding tentacles first, and then its arms, only to bring it toward its beak for the finishing blow.

Whales and especially the sperm whale are the main predators, of this elusive cephalopod. Large sharks and killer whales may also be able to kill smaller giant squids but the sperm whale is surely the main hunter of these squids given how many giant squid beaks we’ve found in the stomachs of these marine mammals.

Scientists have also found plenty of scars on the skin of sperm whales that were clearly made from giant squid suction cups and beaks but none of them seem significant enough to indicate that sperm whales are losing those duels relatively often. At most, a giant squid can only hope to survive an encounter with a sperm whale but not to win. 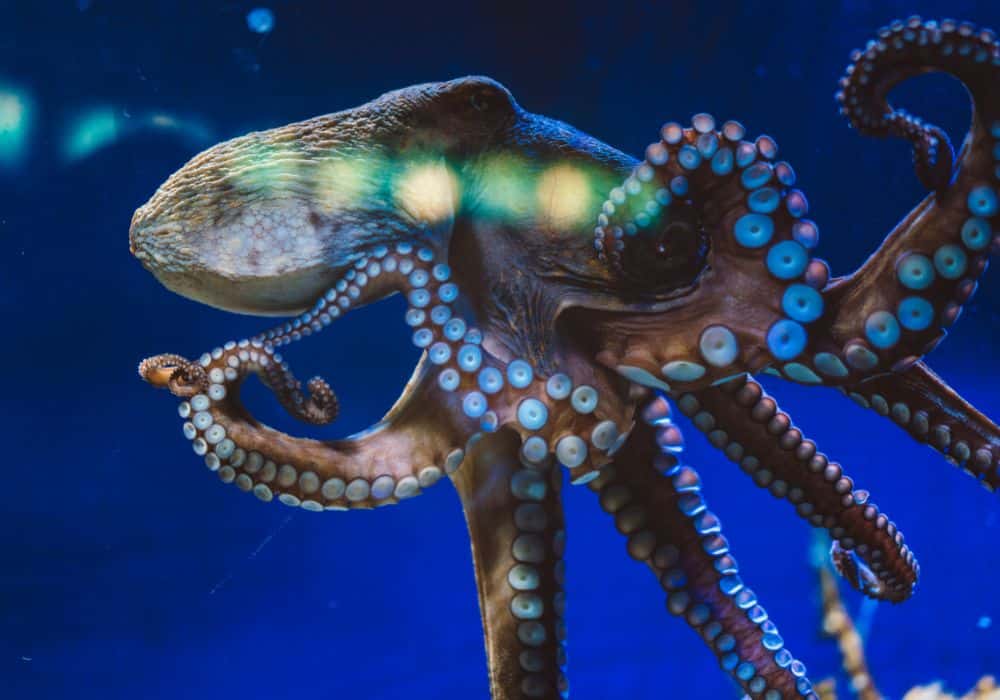 The main giant squid myth throughout history is that of its size. While definitely huge, this cephalopod isn’t nearly as absurdly large as the various ancient legends of even more modern works of fiction have described it as. Giant squids are impressive with their length but they are not that absurdly alien. One can describe them as giant octopuses with extra long tentacles and – while overly simplistic – that wouldn’t be too far off.

The main difference between the giant and colossal squids is well documented – the latter has a much larger and heavier body while the former is smaller and lighter but with significantly longer arms and tentacles. This means that while the colossal squid is heavier, the giant squid is longer. Both are incredibly rare to find and we definitely have much more to discover about them.

On the face of it, you could say that giant squids are just like any other squid – just bigger! And that wouldn’t actually be wrong. All the characteristics giant squids have can be seen in other smaller squid species, however, that doesn’t mean that size is all the difference here. So, here are 8 quite interesting facts that tell a pretty big part of the giant squid’s story:

It’s no secret that many of the ocean’s crustaceans are incredibly intelligent, with much research and awesome documentaries being made about octopuses and squids alike. Yet, a fascinating factoid about giant squids is that their brains are not just pretty large but they are also shaped like donuts. What’s more, that hole in the middle of the brain – it’s where the squid’s esophagus passes through.

Or, another way to phrase this would be that jellyfish sometimes use giant squids as deus ex machinas. That’s because there are some jellyfish species that use bioluminescence as a defense mechanism – whenever a predatory fish attacks them, they light up the dark depths which attracts the nearby giant cephalopods and they would often eat the jellyfish’s predator.

3. These large cephalopods are actually cannibals

Giant squids are known to freely go after smaller squid species and even just smaller giant squids when it’s convenient. These creatures are very opportunistic hunters which they likely need to be at the deepest depths of the ocean.

4. The giant squids are probably at the center of most ancient Kraken and sea serpent myths

It is a running joke that mating whales and their sex organs are the basis of sea serpent myths, but the actually more likely theory is that giant squids were at the roots of the Kraken of legends as well as most legendary sea serpents. After all, it is a logical assumption to make – just like giant squid carcasses are sometimes washing up to our shores today, they certainly did so several thousand years ago too.

5. The females are larger than the males

As is the case with very many other species in the animal kingdom, female giant squids are known to be larger than males. While an actual mating ritual between the two is yet to be observed, we do know – or assume – that the males survive the mating ritual.

Their smaller size is helpful as it makes them more agile – as with other squid species, the male likely sneaks around the female, and projects his several-feet-long sex organ (up to seven feet, to be precise) from its body, and squirts semen around the female’s tenancies.

Whether the male’s sperm actually shoots inside the female or just around her arms, we do not yet know. It is likely that upon sensing the male around her, the female just releases her eggs from her ovaries in a jelly-like substance and the floating sperm fertilized the eggs in the water.

Either way, of the millions of eggs released by the female, most get eaten by other smaller marine predators. Those that survive, however, quickly grow into giant squids themselves.

As for the smaller male – if they are anything like other squid species, they likely die soon after mating. That’s not due to the female doing anything to them, however, it’s just in their nature.

This isn’t all that surprising if you know anything about other smaller squid species – they all have three hearts. Given their unique body structure, they need the extra cardiac power to function with that many appendages deep beneath the ocean’s surface.

7. Giant squids can regenerate their appendages, albeit slowly

Most people know that some lizards as well as starfish can regenerate their appendages after they’ve lost them in battle or have willingly parted with them to distract a predator. Well, squids can’t do the latter but both they and octopuses can regrow lost limbs with enough time and nourishment.

This is often necessary for these mollusks as they have neither a tough exoskeleton nor a reliable internal skeleton. So, they lose their appendages to sharks and whales relatively often.

It ought to be said, however, that regrowing a limb is quite a taxing endeavor. Which, given the relatively short lifespan of squids and octopuses, often means that the new limb doesn’t last them for all that long. Still, it is a very useful skill to have, especially if the squid loses a limb early in its life.

8. Scientists still argue about how many species of giant squids there are

Depending on who you ask, there is either only one species of giant squid on the planet or as many as eight. This is a rather large argument in the scientific sphere even if most would agree that we just don’t have enough data to accurately separate giant squids into different species.

There are some apparent regional differences in the size of squid carcasses found on beaches but those can be due to different ages, periods of migration stages, and so on. So, the exact size and species of these deep sea monsters remain unknown. Still, there’s quite a bit we do know about their appearance.

Giant squids are not the heaviest cephalopod in the world but they are the longest. They are also endlessly mysterious and fascinating and are one of the animals every marine biologist is eager to learn more about as we keep trying to explore the plant’s vast oceans.