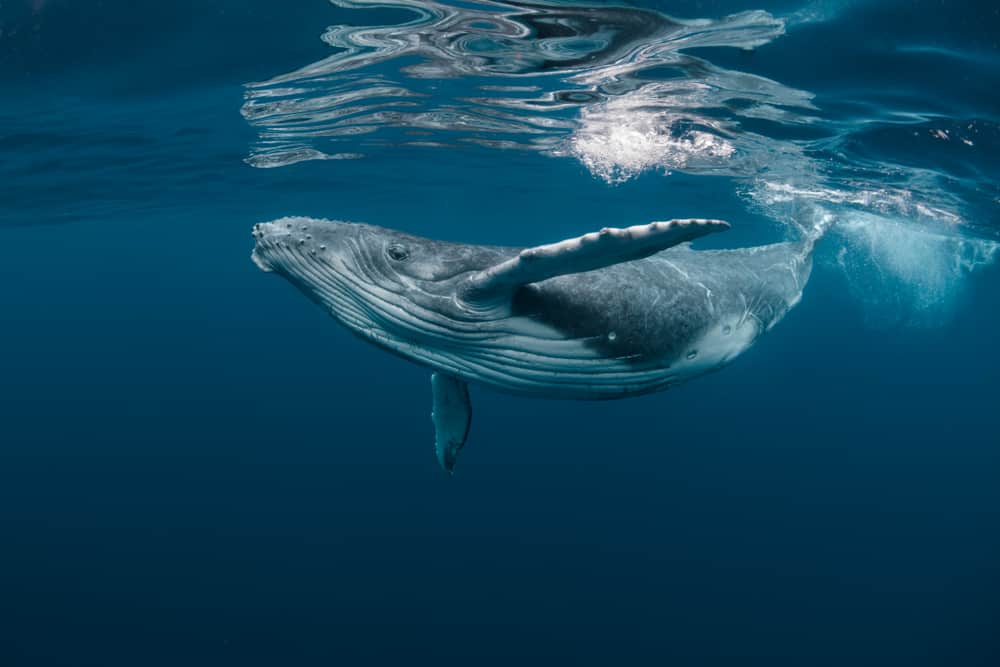 Whales – the largest creatures of this world. They are peaceful, wise, and beautiful creatures, and just as rare to witness. Restless hunted or worshiped, they have captured our attention. If you are lucky enough to see one, you saw its symbol somewhere, or simply dreamed about it, it all can have various meanings. And even though we would love to know more, there is still so much mystery surrounding the whales that hide in the waves of the ocean.

So keep reading if you want to know how whales might influence you, both spiritually and physically. 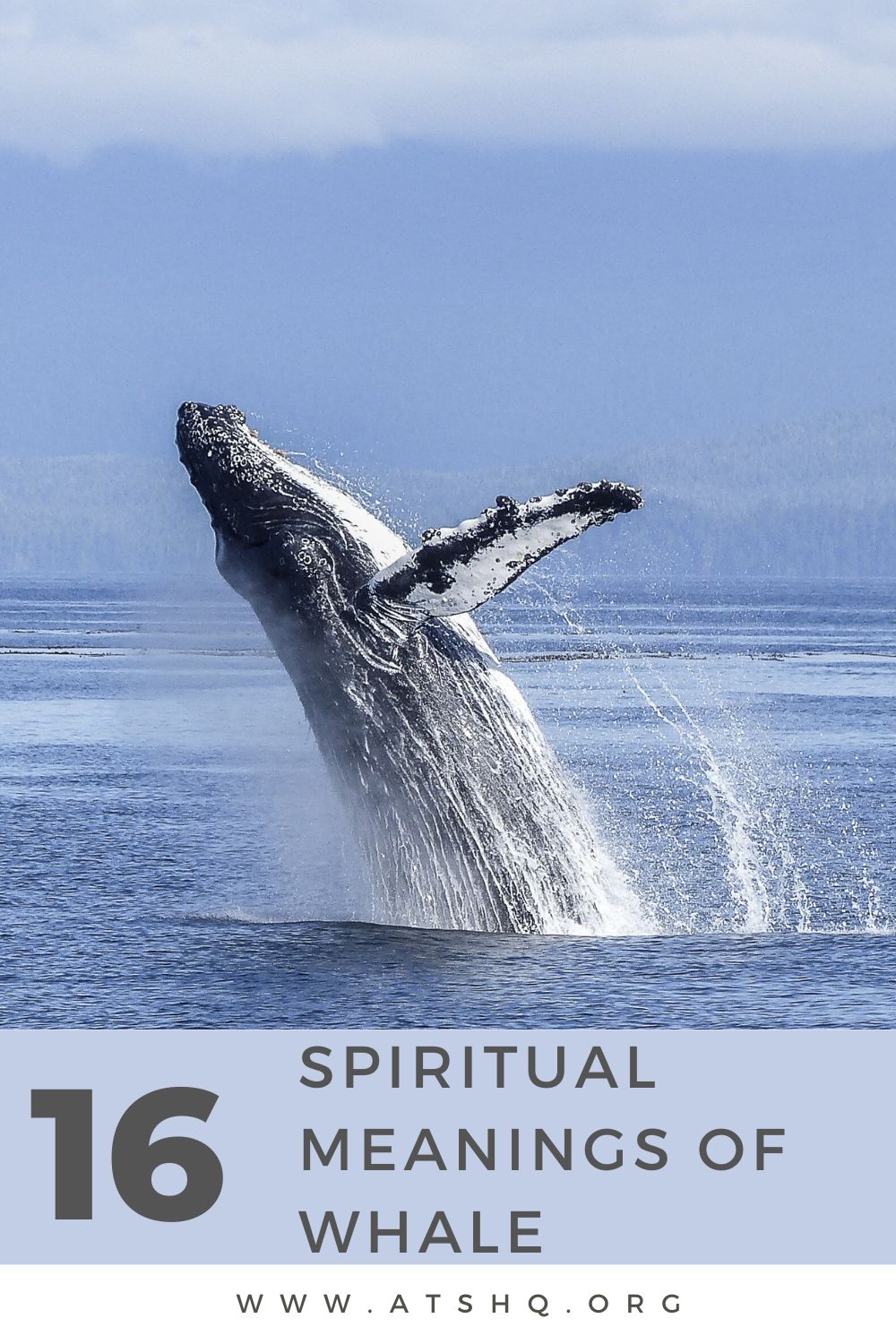 The Symbolism Of The Whale

Whales can be found in all of the world’s oceans, from temperate oceans and tropical waters near the equator to the polar waters of the Arctic and Antarctic oceans.

This mammal has over 200 tons and can be found in just as many cultures around the world, with different meanings in each one. Whales are regarded as divine forces in some cultures, while they are viewed as icons of determination in others. We’ll look at the meaning of whale symbolism and how it relates to your life.

Whales’ resilience has allowed them to adapt to millions of years of change. They can travel long distances and survive in harsh conditions. Whales are a symbol of determination and resilience because of their combination of power and strength. Their inner strength gives them tremendous emotional power, and this should be something humans should strive to achieve as well.

Whales are renowned as familists and they can form incredible bonds. Whales, in general, are concerned about the well-being of their friends and will often defend them from others who try to harm them. They’ve also been seen shielding humans from harm. This proves their natural compassion, intelligence and empathy.

When whales communicate, they use click patterns. According to Science Daily, these are determined by the ocean from which they are called codas. In other words, they, just like people, have different accents.

Whales have enormous heads and brains that account for up to 40% of their body weight.  They are also one of the few animals able to understand complex sensations and emotions and react to them. They are said to promote group communication and cooperation.

Whales are linked to mysticism and spirituality.  They have a deep connection with nature and are one of the most spiritual creatures on the planet. They are known to detect danger more frequently than others using their intuition keener sensory perception. They can effortlessly pick up on the vibes in their environment and frequently respond to their instinct.

Whales, according to marine biologists, use complex sounds and music to communicate with one another and to attract mates. Whales are also known to comprehend the power of music. Some tales claim that the first harp was carved from the bones of a whale.

A lot of people find the sounds they make to be relaxing. Whale music can help people sleep, relax women during childbirth, and soothe crying babies.

According to Ian Samuels, when people listen to whale music, their breathing even tends to slow to match the whale singing. 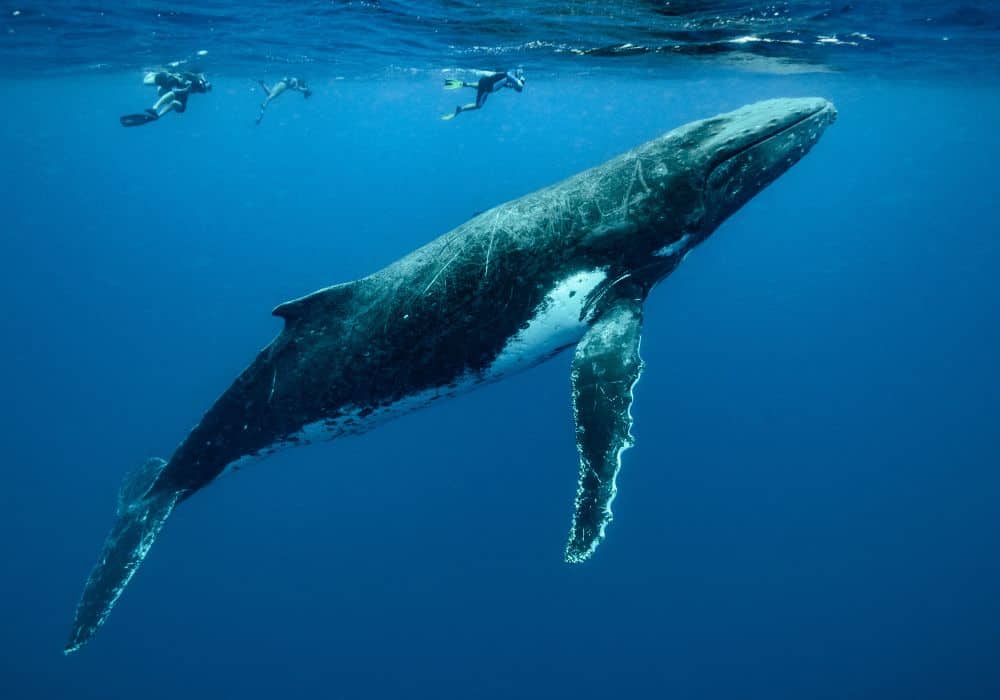 Whales have been an interest for humans since ancient times. They have been highly regarded in many areas and cultures around the world. Even if certain parts of the world sadly hunted some species close to extinction, their splendid nature has always been appreciated. The reports below are from various cultures where whales have been worshiped.

1. The significance of whales in the Bible

Whales appear in the Bible, most notably in the Book of Jonah. In this story, God sends the Prophet Jonah to warn humans. But Jonah did not agree with God and, as an act of rebellion, he left and set sail.  When at sea, a fierce storm starts and threatens Jonah and his crew’s lives. Jonah jumps in the water and the storm dies down, but he is then swallowed by a whale.

Tales like this helped the whale become a spiritual symbol of the Devil and his conniving for Christianity. The open mouth of the whale was typically portrayed as the open gates of Hell. Whales, in this sense, represent both death and the hope of eternal life through the Resurrection.

2. Whales in the Arctics

Big Raven is a story told by the Inuit of the Arctic. Big Raven was a deity in human form. He came across a stranded whale one day. The Great Spirit tells him that in order to save the whale,  he must find the spot in the forest where the moonlight fell.

He’d find special mushrooms there that, if eaten, would give him the strength to return the whale to its home. Big Raven agreed and did everything as advised and was able to help the stranded whale.

3. Greek stories of whales and monsters

Whales were undoubtedly encountered by the Greeks, who spent the majority of their time at sea, fishing or fighting.  They didn’t fully understand whales and  thought they were an island called Aspidoceleon, which translates as “whale island.” Greek sailors would stop on them, thinking it was safe, when the animal would turn around and devour them. The whale is also present in a myth as Poseidon’s‘ pet’ and bringer of revenge.

When it comes to the whale, Native American tribes had their own folklore. The scary animal was terrifying to a lot of people and regarded as a beast, their depictions sculpted into totem poles. But they were also considered to be an important source of nutrition and were shown gratitude.  Because of this, hunting them was something scary.  It was an honorable occupation among tribes along the Northwest coast. Not everybody could do it, and rituals were done beforehand.

Whales were extremely important to Australian Aboriginal tribes. They considered the whale to be linked to knowledge and divine power. They regard it as a beloved ancestor who created their world and nature. Another similar, but mythical creature that was associated with the whale was the Rainbow Serpent, a common deity often seen as a creator god.

To Vietnamese fishermen, particularly those on the central and southern coasts, the whale is more than just an animal. Across the country, numerous temples are committed to the adoration of the whales that died naturally near the coastline.

The whale is highly regarded as Ca Ong, or “Lord Whale,” the creature who guards them at sea. Ca Ong is a god who assists fishermen with good luck, so every time they go fishing, they pray for their safety. 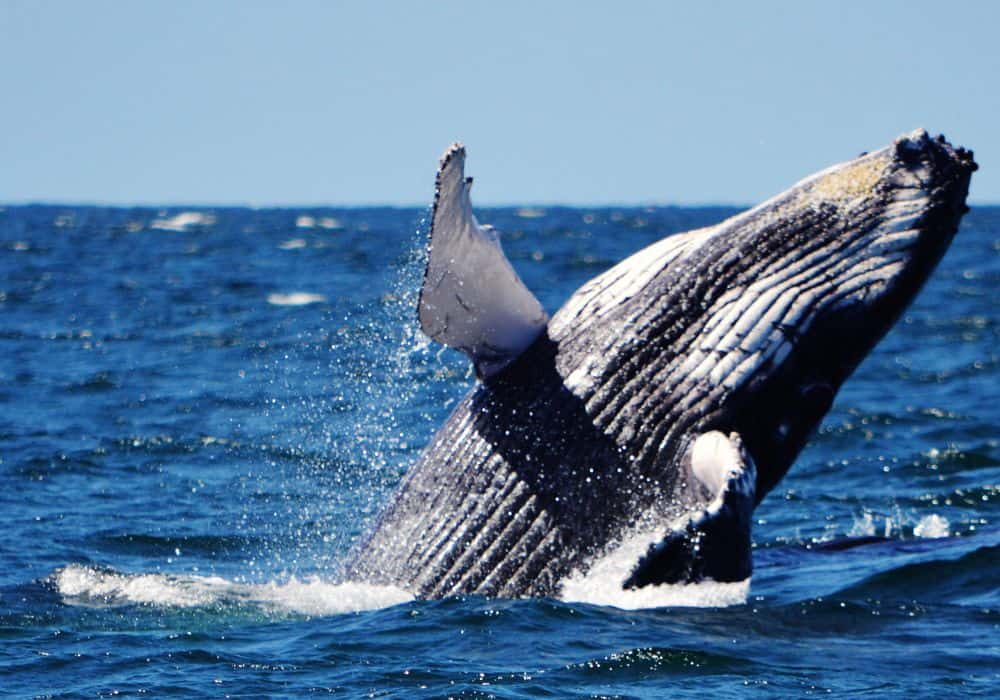 Whale dreams and their significance

If you dreamed of a whale, it may represent the mystical aspect of your life as well as your consciousness of your liberation.  Whale dreams portray the significance of emotional understanding, and spending time together with your family. The whale can represent teamwork, the faster pace of life, and gut instinct.

A swimming whale is associated with an inner sense of recreation, authority, joy, and a remote sense of giving up things that may hurt you. The whale you dream can also be a message from a spirit guide. It may warn you about the appropriate steps to be taken in a current circumstance.

Whales are well-known for their teamwork and friendliness. So, if you had a dream about a group of whales, it could be related to teamwork or your family.

If you dreamed about this, you may be going through a difficult time in your life.

The whale spirit guide is also a symbol of transformation. It is there to remind you that you are the one in control of your life and you have the capacity to evolve. You have the ability to get yourself out of every dark situation and into a better place no matter how hard it can look at that moment.

Whale tattoos have grown in popularity in the last couple of years. Their serene and peaceful disposition helps bring out the calm in us. They come in different shapes and sizes: giant Blue whales, beluga whales, sperm whales, killer whales, orcas and even magical ones with tusks, the Narwhal.

Whale energy enables tapping into our ancestral DNA and opening the inconsistencies of our soul. Whales can also improve our mood.

A whale tattoo can mean: 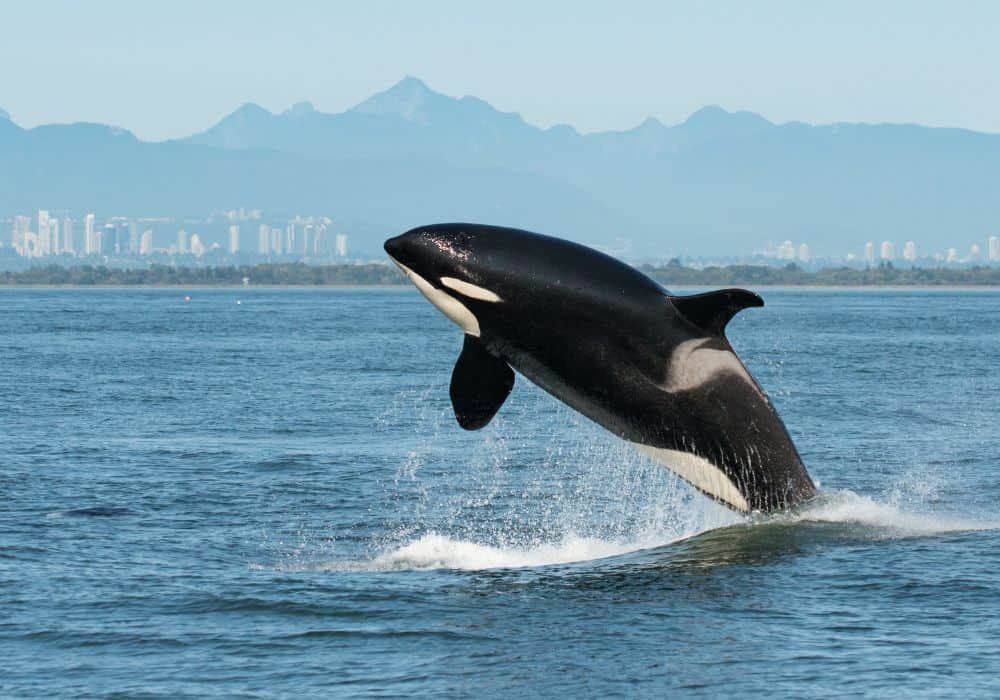 Mobi Dick is unquestionably one of the most famous white whales in literature. In the novel, the author pits Captain Ahab and Moby Dick against each other to symbolize the theme of man vs. nature.  The white color of the humpback whale is used to represent its innocence, but it also represents  Captain Ahab’s obsession with vengeance. Ahab’s fascination is large and destructive, just like the way whales are frequently described in literary and cultural allusions before.

Whales as a spirit animals

The symbolism and meaning of whales should motivate you to gain insight into your psyche to help heal your inner child. If you are lucky to witness a whale in the water, you should hold on to this wonder. Its uniqueness should be an inspiration for us.

Whales, just like their magnitude, can bring big achievements in your life.

If you went through a difficult period or feel like you’ve lost someone close or even yourself, the Whale can show up as your Spirit Animal. The Whale will be the perfect Spirit Animal if you want to heal.

Whales are the spirit animal of people who are wise and sensitive. If you are one of those, you are aware of your psychic and instinctive skills and may feel like a lot of people don’t get you at times.

Even if you know how important communication is in order to form healthy relationships, you may also have difficulty expressing your thoughts and feelings, maybe due to a past trauma.

Whale as a Totem Animal

Whales are known for their way to communicate underwater over really long distances. And you have a whale totem, you are someone who excels at refined interaction over vast ranges and very different people, just like the whale does. Because Whale has deep connections that he truly values, this communication focuses on your close sanctum. You are a reliable person, and your friends and loved ones really appreciate you for that.

Actually listen to what Whale is trying to teach you about spatial and temporal space as you advance. Whales remind us that we are all linked, not just to each other, but to the natural environment and to time itself. Whales offer support, vulnerability, and resilience for us to speak our truth.

Whales are fascinating animals with significant symbolism in a variety of cultures, places, and religions. Unfortunately, they are now a critically endangered species and are facing difficult times because of hunting and human activities. While many people have worked tirelessly to keep whales from becoming extinct, they are still in danger and need protection. We need to help them and learn from them, as they are an important connection to our past, our subconsciousness and our emotional rebirth. They can teach us about some of the most important aspects of life and in the end, about our own humanity. We hoped this helped you understand what symbolism a whale has and how it can manifest in your life.