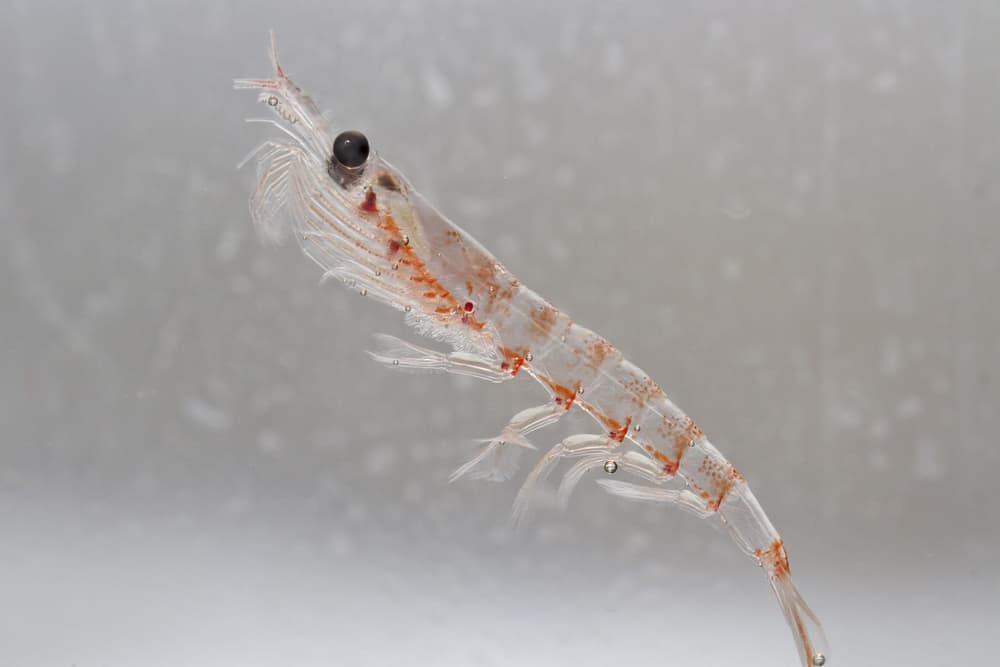 Krill are tiny-sized aquatic animals that live in the deepest parts of open oceans. Despite their small size, their importance to marine ecosystems is huge. This is because krill rest at the bottom of the ocean food chain and act as fuel for most larger fish, including whales.

But, what’s so important about these minuscule shrimp-like species? How do they maintain the balance of marine ecosystems? And, what do they actually eat themselves? If you want the answers to these questions, keep on reading!

In this article, we’ll thoroughly examine the biology of krill, as well as what do krill eat. We’ll also determine the krill’s predators, as well as its many different uses.

Krill are tiny marine animals that belong to the family of crustaceans and the order of Euphausiacea. Their name originates from a Norwegian word that means “small fry of fish”.

Krill live in most of the planet’s oceans, but they are particularly abundant in the Antarctic Ocean, where their biomass can reach a total weight of up to 380 tonnes. Due to their large population in the Southern Ocean, most of the krills’ predators come from there.

Krill have a very similar anatomy to most crustaceans, such as shrimps. Apart from their size, one way to differentiate them from other crustaceans is their gills which are visible from the outside.

In general, krill are decapod crustaceans with a hard exoskeleton that is usually transparent. Their head and thorax are fused together to form the cephalothorax. They also have an abdomen (pleon) containing their ten legs for swimming and a tail fan which they use to change direction while swimming.

Most krill species are also bioluminescent, which means that they emit light. It is believed that they acquire this ability through consuming dinoflagellates and absorbing a specific pigment inside them. The purpose of this light emission is mainly unknown, but it could be for orientation, mating purposes, or social interaction.

Krill have plenty of uses for humans. They are used as a source of food and nutrients in fish farms and aquariums, and they can also be turned into bait for fishing. Humans also eat them and make dietary supplements like krill oil capsules from them.

What Do Krill Eat?

Generally, krill are considered omnivorous species, meaning they can consume anything for nutrition. In fact, research shows that krill can even process and digest very small plastic (less than 0.2 inches) and turn them into even smaller pieces.

Nevertheless, most krill species have a plant-based diet and consume phytoplankton or algae. Both phytoplankton and algae are marine plants that produce oxygen and carbohydrates through photosynthesis. Krill eats these aqua plants either from the surface or sometimes from the bottom of the ocean.

Some types of krill are obligate carnivores and can’t sustain themselves from phytoplankton and algae. These krill primarily consume zooplankton, which are small ocean creatures like jellyfish, snails, and small fish. They also often eat other small crustaceans called copepods and even small fish larvae that can fit in their mouths.

To summarize, these are some of the foods that krill usually consume:

How Do Krill Eat?

Krill are known as filter feeders, which is a unique way to consume food. Their frontmost swimming legs, called thoracopods, form small brushes which they use to filter their prey from the water.

As the krill swim, they collect their prey and keep it on their front appendages. When it is time to feed, the krill will move its appendages towards its mouth to eat everything it has collected.

How Often and How Much Do Krill Eat?

Since the krill’s feeding pattern revolves around collecting their prey while they swim, a krill will essentially eat whenever it can find food. Krill also has the ability to go without food for a very long time. In fact, krill can survive for up to 200 days without food.

Krill have developed a mechanism to survive during the colder winter months when food is scarce. They shrink their whole bodies except for their eyes and shed many of their organs, including their sex organs. Once they have access to regular food, they grow back to their original size.

Despite eating constantly, individual krill don’t consume much food. It is believed that krill have an average dry weight of about 120 micrograms and consume up to 10% of their weight in carbon daily. Therefore, each krill eats about one microgram of carbon.

While this number seems incredibly small, remember that the krill population is enormous. Thus, the total amount of food consumed by krill daily is vast. Also, krill have very specific migration patterns.

To find food or avoid their predators, krill will often move vertically from the bottom of the ocean to the surface and vice versa. This migration is believed to be influenced by their internal circadian rhythm.

Krill are a crucial part of any marine ecosystem due to their essential role in the aquatic food chain. Essentially, krill are responsible for converting the products of their prey to a more suitable form for their predators to consume.

Krill have several predators, particularly in the Antarctic Ocean, where their population is the largest. Some of its most important predators are:

Krill is one of the most important species in almost all marine ecosystems for several reasons. To begin with, krill feed off of marine plants such as phytoplankton and algae, and their purpose for consuming them is two-fold:

As we mentioned above, krill are an important link to all aquatic food chains. This is because they can convert the products of their prey -algae, and phytoplankton- into usable substances for their predators.

The primary food source for marine animals like the blue whale are organisms such as krill. Due to their immense size, they consume tons of these small organisms every day. Therefore, large populations of krill are essential to maintain the balance of ocean ecosystems.

There have been instances where a decrease in the krill population has had devastating consequences on ecosystems. One such case happened in the Bering Sea in 1998 when there was a sudden bloom of coccolithophore, a type of phytoplankton. This led to a decline in the population of diatoms which are competitors of coccolithophore.

In turn, the reduction of diatom resulted in a considerable decrease in the krill population since they couldn’t consume the much smaller coccolithophore. The scarcity of krill devastated several animals in the ecosystem, such as salmon and local seabirds. Other threats to krill populations include several parasites and climate change.

Krill are also very important in maintaining an equilibrium in the population of algae and phytoplankton. Since these organisms rely on the sun to survive, their populations can increase drastically during periods of increased sunlight.

To compensate for this, the krill population also increases since there’s an abundance of food. That’s why the largest krill populations can often be found where phytoplankton thrive, such as close to the ice surfaces in the Southern Ocean.

If the krill population in an aquatic environment is not adequate, it’s likely that phytoplankton will overpopulate an area. This can lead to the formation of algal blooms, which can have a catastrophic effect on marine ecosystems.

When phytoplankton or algae overpopulate the water’s surface, they block sunlight and oxygen from reaching the ocean’s lower depths. Additionally, phytoplankton consumes more oxygen during cellular respiration and can produce toxins that kill fish and other marine organisms.

Krill are also harvested as food for animals and, to a lesser extent, humans. They are one of the primary food sources in aquatic cultures and are also often used as fish bait or pet food. Additionally, krill have been used as human food or in dietary supplements due to their richness in protein and omega-3 fatty acids.

Despite their minuscule size, krill is one of the most crucial pieces of almost all marine ecosystems. They help to control the population of phytoplankton by eating them while also being the primary source of food for several aquatic animals. Without krill, some of these animals would simply die of starvation.