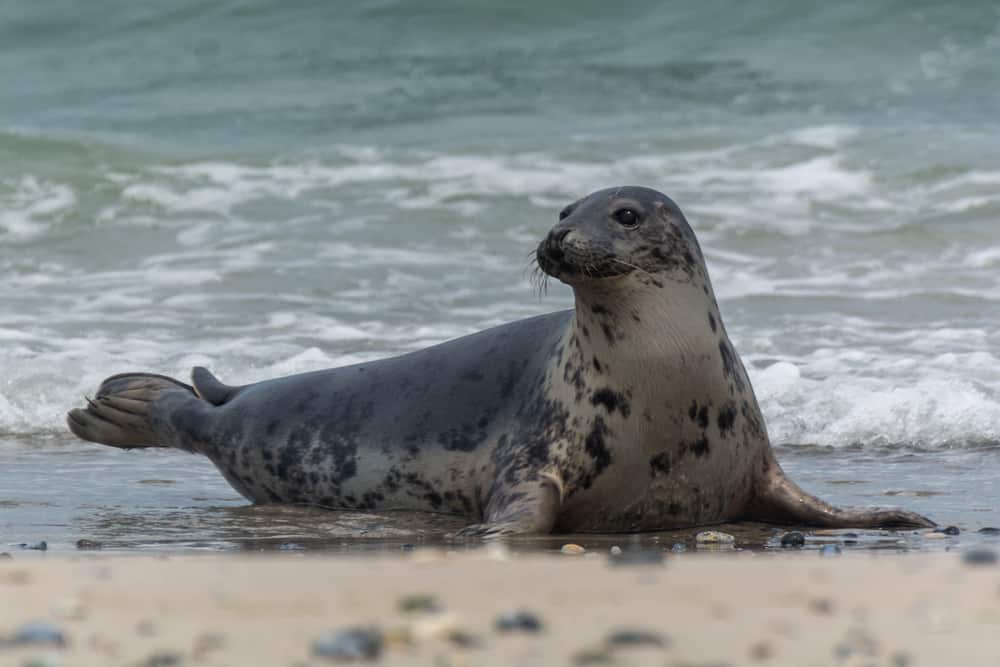 If you like to visit zoos, you probably noticed some animals were more interested in human interaction than others. One such animal is a seal – an interesting marine mammal that piqued human curiosity since the dawn of time.

While it is surely fun to observe seals doing their tricks, learning more about them is also quite interesting. What do seals eat and where do they naturally live, these are only some of the questions I will try to answer for you in this article, so keep reading to learn more!

Seals belong to a larger group of marine mammals called pinnipeds. This group is comprised of three families: Odobenidae family which only consists of walrus, Otariidae family which includes fur seals and sea lions, and Phocidae – a family of true seals, also called earless seals.

Seals mostly inhabit polar and subpolar regions, such as the Arctic, North Atlantic, North Pacific, and the Southern Ocean. However, some seal species such as monk seals and some otariids inhabit tropical and subtropical waters.

As semi-aquatic animals, seals can be found in coastal waters, open ocean, brackish water, as well as freshwater lakes, and rivers. When they get out of the water, seals usually rest on beaches, rocky shores, sea caves, shoals, mud flats, tide pools, and even cliffs.

Some seal species are known to migrate and travel vast distances. While traveling, seals use various strategies to reach their destination, such as observing water and wind currents, geomagnetic fields, and even observing the position of the sun and moon.

Seals have spindle-shaped bodies; their front limbs evolved into flippers, and their hind limbs involved into a swimming tail. True seals don’t have ear flaps, which earned them the name earless seals. However, these seals have ears and their hearing is quite decent.

Seals have rounded heads and flexible necks. Their body is covered in fur coats that keep them warm and dry when in water. Individual hair on the seal’s fur is called lanugo. Young seal pups have more fur than adult specimens.

After successful mating and fertilization, the seal embryo might enter a stage of suspended development, which means it will wait for weeks and even months until it gets implanted in the mother’s uterus. This process happens as a way of ensuring that the birth occurs during the most favorable conditions, usually during the spring or summer months.

Usually, only one seal pup is born. Sometimes, twins are born, but their mortality is high. Pups are born underdeveloped and they nurse on their mother’s milk until weaned. In some seal species, male seals will teach the young ones to swim and hunt, but in other species, males are known to be aggressive and cruel towards the younglings.

Fur seals actually don’t belong to any of the true seal species, and they are more closely related to sea lions. They got their name due to their fur that’s denser than most other species.

On the other hand, crabeater seals live in polar habitats in Antarctica. These seals live on huge areas of floating ice, and they are by far the most numerous seal species in the world.

Also known as common seals, these animals are found around Arctic coastlines. This species is the most distributed seal species, inhabiting the Northern Atlantic ocean, Baltic sea, Pacific Ocean, and the North Sea. Harbor seals have an interesting appearance, as their fur has a unique spot pattern.

Another seal species living on Antarctica coastlines, Weddel seals got their name from the British sealing captain James Weddel. They are among the largest seal species, and their males are smaller than females.

The smallest and the least numerous species of Antarctic seals, Ross seals live on floating ice. They have large, disproportionate eyes, and they are able to produce complex and siren-like sounds without even opening their mouth. It is yet unknown why they make these sounds.

What Do Seals Eat?

They might look cute and friendly, but seals are carnivores and quite experienced and aggressive hunters. They feed on aquatic animals, mostly fish. However, some seal species have a quite diverse diet, and they will feed on other aquatic animals.

What Do Seals Eat In The Wild?

Some species enjoy a more varied diet while others are specialized in specific prey. For example, crabeater seals specialized in hunting and eating krill and crabs, and they are so successful at it that they became the most numerous seal species in the whole world.

Seals are also capable of hunting penguins. They catch them when penguins come into the water. Harbor species also feed on ducks and grey seals are able to hunt and kill harbor porpoises.

Sometimes, seals exhibit cannibalistic feeding habits, often preying on their young. The reason behind this behavior is unclear, some researchers suggest it happens when there is a lack of food, while others claim that some seals are simply cruel and brutal.

No matter what’s their food source, seals need to eat 5-6% of their body weight each day.

What Do Seals Eat In The Captivity?

When in captivity, seals don’t have to hunt for their food. Instead, they are fed on a regular basis. Their diet in captivity should be similar to their diets in the wild as much as possible.

For elephant seals, the diet should consist of fish, mollusks, rays, and squids. In the wild, they would sometimes hunt small sharks, but it would be hard feeding them with sharks in captivity.

Weddel seals, on the other hand, will thrive when fed with shellfish, prawns, tuna, octopus, codfish, etc. Ross seals should be fed with squid and various species of fish.

Crabeater seals have particularly evolved to feed on krills, and they should be fed accordingly. However, they can also eat squid, fish, and octopus.

In general, seals can be fed fish, crustaceans, and other aquatic animals.

For the first year of their life, baby seals, also called seal pups feed on their mother’s milk. Seal’s milk has a high-fat content, but it doesn’t contain lactose. Sometimes, baby seals will try to steal the milk from other breastfeeding female seals.

Once they reach the age of one year, they will be weaned and left to learn how to swim and hunt. Many seals lose half their weight during this period, but if they manage to survive, they will soon start to hunt just like the adult seals and will regain their weight.

How Do Seals Forage?

Seals hunt their prey underwater. They can dive for several hundred and thousands of feet, holding their breath for up to 2 hours. They grab their prey with their teeth and strong jaws. Although they have strong teeth, seals don’t chew their food, instead, they swallow it whole.

Seals have excellent hearing and highly sensitive whiskers that enable them to quickly detect their prey. They are fast swimmers and can easily catch up to any prey.

Usually, seals kill their prey by piercing it with their sharp teeth or even tearing it apart- Sometimes when they catch large prey, seals will shake it violently and bash it against any hard surfaces until they kill it. Some seal species like the leopard seal use filter-feeding to catch their prey.

Seals can hunt individually or in groups, and they were observed hunting together with dolphins.

What Are The Predators Of Seals?

Due to their aggressive nature, seals don’t have many predators, but they can still be prey to some other animals, especially if they are still young or if they are sick and injured. Some of the animals that feed on seals are killer whales, sharks, polar bears, arctic foxes, and other seals.

However, the most dangerous seal predator is a human. Humans hunt seals for thousands of years, sometimes for their meat and sometimes for their fur. While the overall seal population is stable, some species went extinct or were driven to near extinction due to excess hunting.

Seals look cute and they are smart and friendly animals that can even learn some tricks in exchange for food. This makes them interesting to zoo visitors and other animal lovers. However, despite their friendly behavior, seals are quite dangerous predators and skilled hunters.

Seals eat mostly fish and other aquatic animals, such as mollusks, squids, octopus, rays, shrimps, and lobsters, but they can also feed on ducks, penguins, and other animals they manage to catch and kill.

Have you ever seen seals in zoos or in wild? How did they react to your presence?