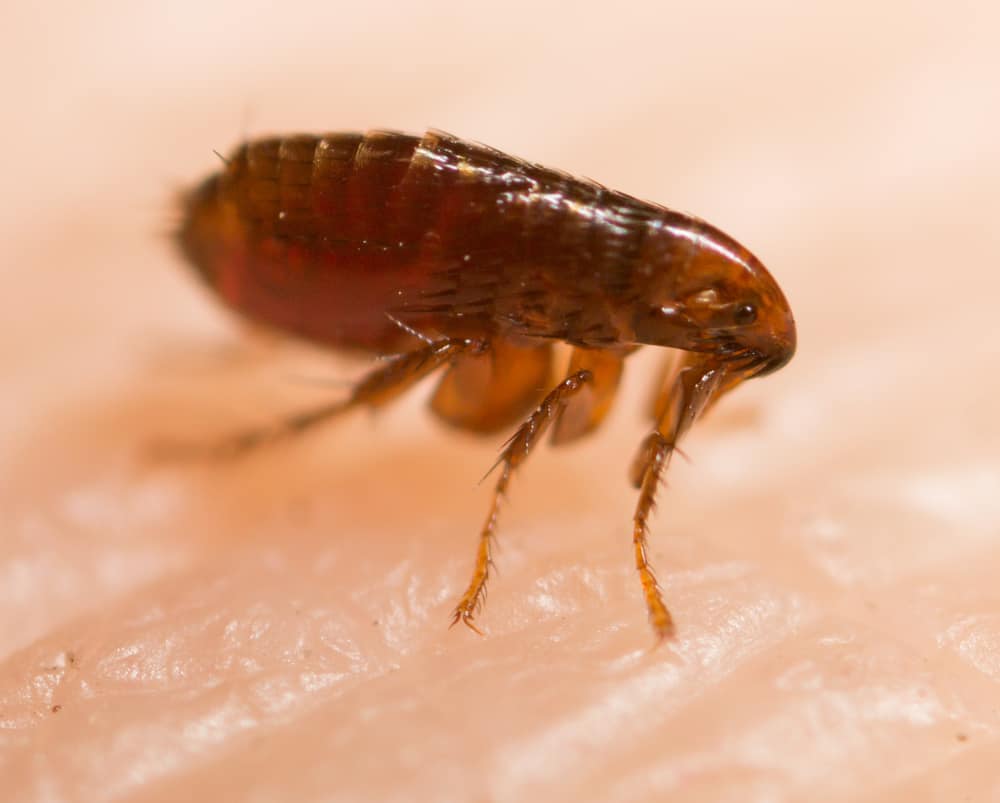 If you’ve ever seen an animal or a person persistently scratching a part of their body, they might suffer from fleas. Fleas are small irritating parasites that are known to suck blood from their host, causing severe itching.

But, do these annoying little bugs only consume blood? If not, what else do they actually eat? If you want the answers to these questions, keep on reading!

In this article, we’ll thoroughly examine the biology of fleas and their dietary habits. We’ll also discuss the dangers of flea infestations and what you can do to get rid of them.

Fleas are tiny bugs that are also known as Siphonaptera. Their name originates from the Greek words “siphon” which means “tube”, “a” which means “without”, and “ptera”, which means wings. Essentially, fleas wingless insects with tube-like mouthparts for piercing skin and sucking blood.

The body of a flea has a very narrow width and is covered in hard scales known as sclerites. It also has powerful hind legs, which allow it to jump long distances that can reach up to 50 times its body length.

Fleas are considered parasites, or pests, which means that they depend on their host to survive and breed. Their biology and evolution heavily reflect this. The sclerites on its body are abrasive, allowing fleas to withstand the enormous pressures of scratching from their host. Also, its narrow body allows it to move easily between the hairs and fur of its host.

There are several different flea species, and most have mammalian hosts, with very few being parasites to birds. Also, most flea types are highly selective regarding their host and will not breed on any other mammal. Some others are less selective and can continue their life cycle on more than one host.

What Do Fleas Eat?

Fleas are some of the nastiest bloodsucking bugs out there. Their biology and anatomy allow them to find the best vessels on the host’s body and suck out copious amounts of blood. However, contrary to popular belief, not all fleas rely on blood for nutritional purposes. Instead, they depend on blood for breeding.

Female fleas consume more blood than male fleas since they need the nutrients to lay eggs. Once the flea eggs hatch, flea larvae cannot eat blood straight away. Instead, they consume decaying matter from their host and even adult flea feces, which contain traces of blood.

Once flea larvae have matured into adult fleas, they can start looking for blood to use for breeding and nutrition. Ultimately, most flea types are considered omnivores and can eat basically anything. This includes:

It’s important to note that not all fleas exhibit the same feeding behaviors. For instance, cat fleas (Ctenocephalides Felis) are more dangerous than dog fleas or human fleas since they solely rely on blood for nutrition and reproduction. That’s why these bugs will bite anyone aggressively, including cats, dogs, and even humans.

How Do Fleas Eat?

Once a flea becomes an adult and needs a host, it will use its strong hind legs to jump on the host’s skin. It’ll stay there until the host stops moving for a prolonged period, such as during sleeping time. At that point, the flea will start to search the host’s body for a suitable blood vessel to eat from.

When it finds a suitable vessel, it’ll start the feeding process. It will use its sharp mouthparts to bite on the skin’s host and begin sucking the blood from it. It will also apply its saliva, which has anticoagulant properties, to allow the blood to flow freely around the area. The flea’s saliva is what actually causes an intense itch in its hosts.

Fleas will usually revisit the same spot a few times to feed since they don’t want to have to find a new adequate vessel. They also have a tendency to look for capillary blood vessels. These small vessels transfer blood with higher pressure, which significantly aids the flea’s feeding process, as it sucks more blood faster.

How Much Do Fleas Eat?

Fleas are tiny insects, so you would expect them not to be able to overeat. However, their parasitic nature makes them overeaters. When a flea finds a proper host with adequate blood vessels, it will suck substantial amounts of blood in case it loses its host and doesn’t have access to a blood meal for some time.

Fleas can eat a quantity of blood that reaches up to 15 times their body weight. This equates to about 13 μL of blood per day. While this might seem small, consider what would happen if you ate the equivalent amount of food (over 2,000 pounds) daily.

These amounts refer to female fleas, which require much more food than males since they need the additional nutrients for laying eggs. Once the female flea feeds properly, it can lay up to 20 eggs every day.

Due to the large amounts of blood they consume, the feeding process of the flea can be very long. That’s why most fleas prefer to eat at night or while their host is resting and can’t disturb them.

Fleas can survive without food for up to several days, especially if they’ve previously had a full meal. If a flea can’t find a proper host, it will feed off unsuitable hosts, such as humans, before looking for optimum ones.

What Are the Dangers of Fleas?

Despite their small size and seemingly harmless bites, fleas can cause severe problems to you or your pets.

Whenever a flea bites a human or an animal, it usually leaves a red, swollen bump with a distinct puncture point, similar to those of mosquitoes. These bites cause an annoying irritation and itching sensation. The fleas’ saliva mainly causes itching.

The itching sensation caused by a flea bite drives the host to want to remove the pest by scratching, biting, or pecking. This can cause even more irritated skin and lead to hair loss.

Flea bites can also cause a form of the eczematous skin disease called flea allergy dermatitis. This disease is most common in dogs and cats and causes huge red bumps on the animal’s skin and loss of hair in the area. Flea bites can even lead to anemia in extreme cases.

Since fleas can have a plethora of hosts and feed off of their host’s blood, they can often be vectors for several diseases. These can include bacterial infections or viral infections such as typhus and tungiasis.

The latter is a very common disease in hot climates such as Africa and South America and can even be deadly. It’s caused by the jigger or chigoe flea and leaves the skin swollen and very itchy. If not treated properly, it can lead to gangrene, necrosis and even be fatal for the host.

Also, since fleas can bite other hosts like humans, they might transmit harmless diseases to their primary host but are harmful to humans. The most remarkable example of this is the bubonic plague, which was responsible for millions of deaths across Europe during the Middle Ages.

How to Get Rid of Fleas?

If you have pets like kittens or puppies, you should always keep them and your home clean to avoid flea infestations. You should vacuum and wash carpets and thick fabrics frequently, as these are the primary spots where fleas live and lay eggs. You should be very careful to avoid rodents, like mice, squirrels, or opossums, as they can often carry fleas in their thick fur.

When it comes to your pets, clean them, as well as their beds and toys, thoroughly. Check their skin and fur if they spend time outdoors, or play with other animals, to ensure there are no fleas. You can also wear flea collars on them. Finally, be aware of excessive licking, scratching, or skin biting, as these can be signs of fleas.

If you find fleas on your pet, you should immediately contact your veterinarian and ask for advice on what product to use. You should also thoroughly bathe your pet with soap and hot water and comb their fur with a flea comb to remove the majority of fleas. Flea treatment might require follow-ups during the next few days, as some fleas can be persistent.

If you believe that an area in your home might be infested with fleas, you need to isolate it from the rest of the house and deep clean everything inside. Ideally, you should also contact a licensed professional for pest control.

If you leave them unattended, fleas can be very dangerous for you and your pets. If you see something that resembles a flea on your pet, you should immediately try to clean it off. Afterward, contact your vet to give you advice about proper flea treatment.