Elephant seals are unique animals that often feature in nature documentaries and zoos around the world. Many people know of the elephant seal, but their knowledge goes no deeper than its name and what they look like.

Are you curious about elephant seals and want to know more about what they eat, their life in the wild, whether they are an endangered species, and who their main predators are?

You’re in luck, as this article will cover these topics and provide some interesting facts about these amazing animals.

What Are Elephant Seals? 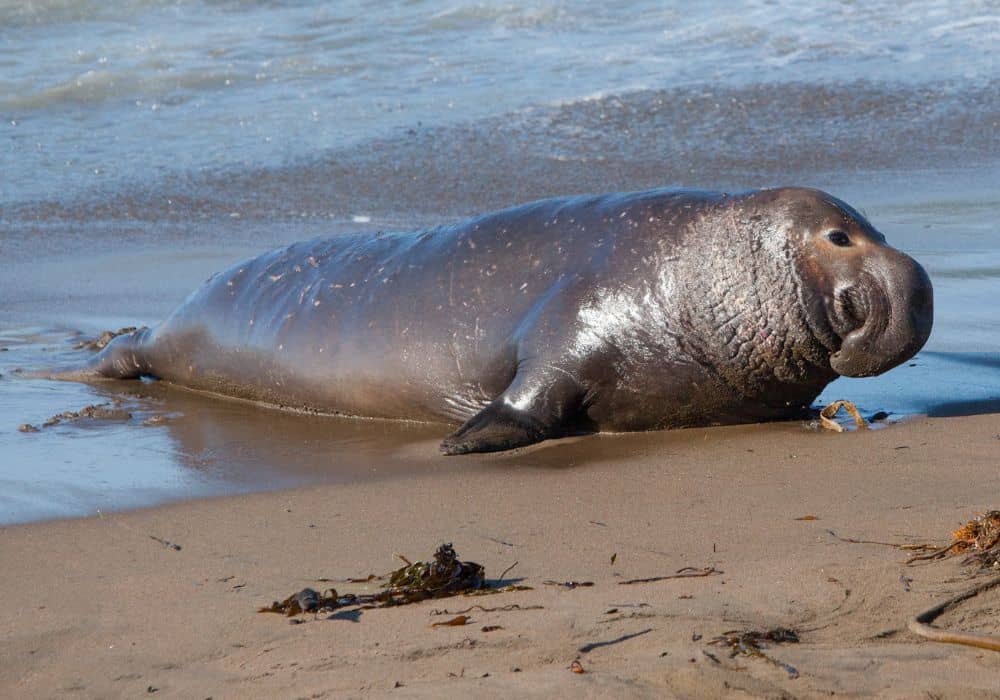 Elephant seals are marine mammals with fur that can live both on land and in the sea, though the majority of the time is spent in the water. There are two species, Northern and Southern, and they can usually be found in America or Antarctica.

According to NOAA Fisheries, Northern elephant seals can be found in the eastern and central North Pacific Ocean. They migrate to the Channel Islands off mainland California and Baja California in Mexico to breed, and some males even go as far up as the Gulf of Alaska.

Southern elephant seals live in the icy water off the coast of Antarctica the majority of the time but will move to land to breed and shed their fur. Adult males have large snouts that inflate to look like trunks once they have reached maturity, hence the name.

Females are smaller than the males, and this difference in size is a great way to determine the gender of an elephant seal. Females also have a longer lifespan, living an average of 19 years in the wild whereas the males live an average of 13 years.

Of the two species, Southern elephant seals are the biggest, and are actually the largest of all known species of seals. They have big black eyes, blubber to keep them warm, whiskers, two flippers, and a finned tail that helps them swim through the depths of the ocean.

What Do Elephant Seals Eat? 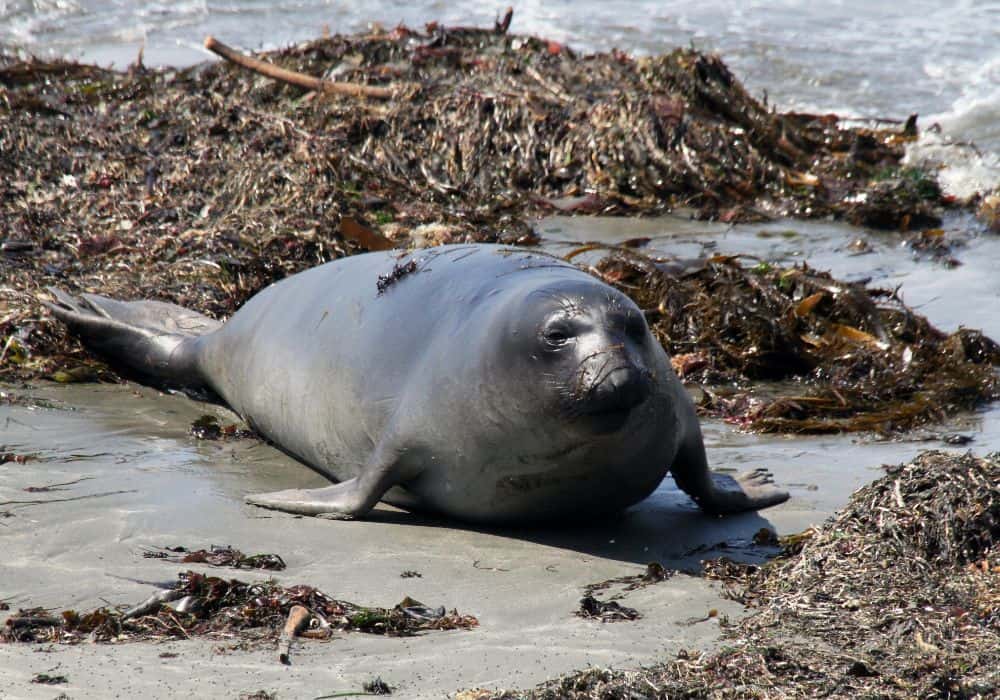 According to Animal Corner, the primary diet of elephant seals appears to be similar regardless of whether they are Northern or Southern. They are carnivores and will seek out live prey to feed on.

Squid and other large fish make up the majority of an elephant seal’s diet, and they will travel large distances in the span of nine months to find enough food to survive. They can dive thousands of feet to catch their prey and can stay underwater for up to 30 minutes.

They also eat small crustaceans such as crabs, prawns, and shrimps. Eels can also be a part of an elephant seal’s diet. Sometimes, elephant seals may also decide to attack and eat penguins, though it is very rare for them to do so.

They can go without any food for up to three months, which is usually during breeding season as they are on land. Outside of this, it is very rare for them to need to go without.

Though they tend to go for prey that is smaller than themselves, some elephant seals have been known to catch and consume small sharks and rays. This is possible thanks to the size of the seal, as Northern males can grow up to 13 feet and females can grow up to 10 feet.

In contrast, the male Southern seals can grow to almost double the size of their Northern counterparts, as they can grow up to a whopping 20 feet long. Female Southern elephant seals are much smaller, but still a respectable size.

BBC Earth have uploaded a clip from a documentary that shows just how big these seals can get compared to humans.

An elephant seal pup first survives only on its mother’s milk before learning to hunt for itself after 4-6 weeks. These seal pups gain weight at an astonishing rate, as they essentially put on enough to quadruple their birth weight within a month.

Male and female elephant seals have different ways of hunting prey. Males will scan the ocean floor for food to catch, keeping to a set route, whereas females prefer to hunt in the open ocean and will chase their prey by following them no matter where they go.

Elephant seals have an active lifestyle for the majority of the year. They have to go out searching for enough food to survive day to day, as well as storing enough fat to get them through the mating season, where they fast for a month.

They are largely independent except for when they come ashore to breed, at which point there will often be a social hierarchy where the most dominant males get first pick when deciding who to mate with.

Harems form amongst elephant seals and are a way for males to assert their dominance. These harems often have displays of violence, especially when males are fighting over a female, and will use their snouts to make the loudest sounds to scare away the competition.

Breeding season starts in August and ends in October. Male elephant seals go ashore first, and the females join them in September. The females give birth to their pup and spend the next few weeks raising them and preparing to breed for the next year.

Only a select few male seals within a harem will successfully breed with females, and it is rare for a male elephant seal to become a father before they are 10 despite reaching maturity around the ages of 3-6.

This is because they have to be the biggest, most dominant seal in the group, and will have to fight off all the competition for the privilege. One male elephant seal can breed with up to a hundred female elephant seals in a single season.

After breeding season is over, they will leave the shore and swim back to the ocean. Pregnancy in elephant seals has an 11-month gestation period, so mature females can spend the majority of their adult lives either pregnant or raising a pup ashore.

Elephant seals are excellent divers as they can hold their breath for up to 80 minutes at a time! They have a high blood oxygen level that helps them keep oxygen circulating throughout their body whilst underwater.

On the other hand, they can be rather slow swimmers with a top speed of 25km/h. This doesn’t affect their ability to catch prey, but it can be a detriment when trying to get away from aquatic predators.

They also struggle to move when on land. This is especially true for the males, as their size and weight make it difficult for them to move quickly. Again, this puts them at risk from predators, and can also threaten the survival of the pups if they accidentally get squashed. 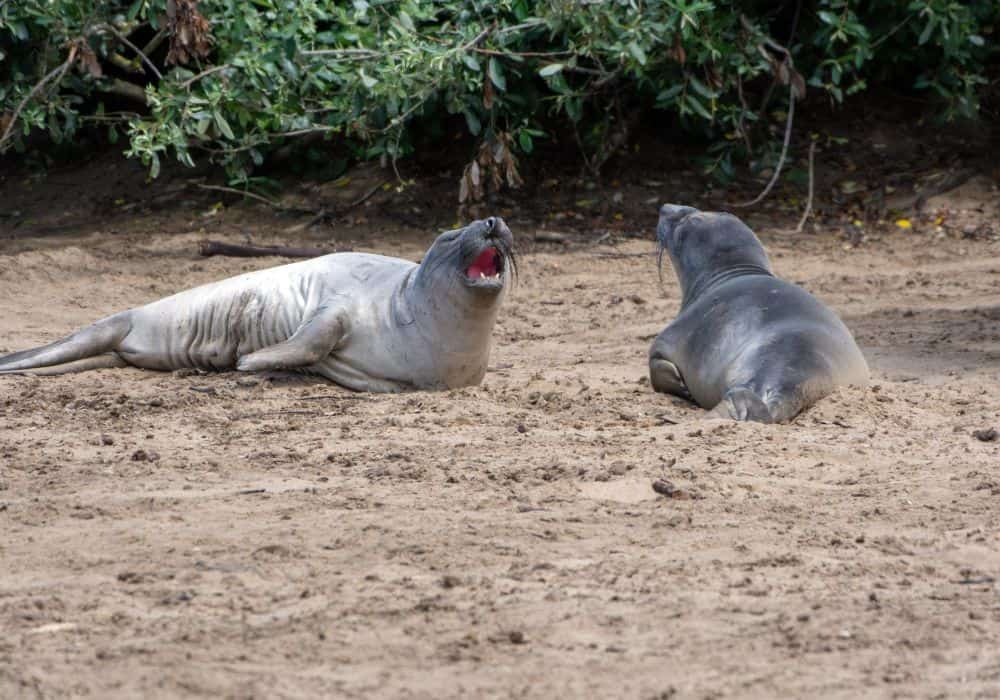 There are a few notable predators that hunt elephant seals as food:

Elephant seals are also under threat by climate change and environmental issues that have an impact on both their food supply and their natural habitat. The melting ice caps reduces the amount of land Northern elephant seals have to breed on, and results in warmer water.

This small increase in the temperature of the ocean can lead to all sorts of environmental problems, as animals that need cooler water to survive may either become extinct or move away to a different territory, which then also affects the food chain.

Humans could also be considered a threat, though the impact of hunting seals has reduced dramatically within the last century after conservation of the species became a priority.

Elephant seals live in different climates depending on their breed and can be found living in both sub-Antarctic waters and warmer, more tropical waters. They prefer living on islands such as Guadeloupe Island when ashore to molt or breed.

There was a period at the end of the 19th century where elephant seals almost went extinct due to people hunting and killing them for their blubber, which was converted into oil for lamps. At one stage, there was just 100 Northern elephant seals left worldwide.

However, after a huge conservation effort, their population has regrown and reached the point that it was at before they were hunted by humans. They are no longer considered to be endangered and currently there are an estimated 150000 elephant seals worldwide.

In summary, elephant seals are carnivores that eat the following foods:

We hope you have found the answers you were looking for today, but if you have any other questions or comments, please leave them below and someone will respond to you as soon as they can.