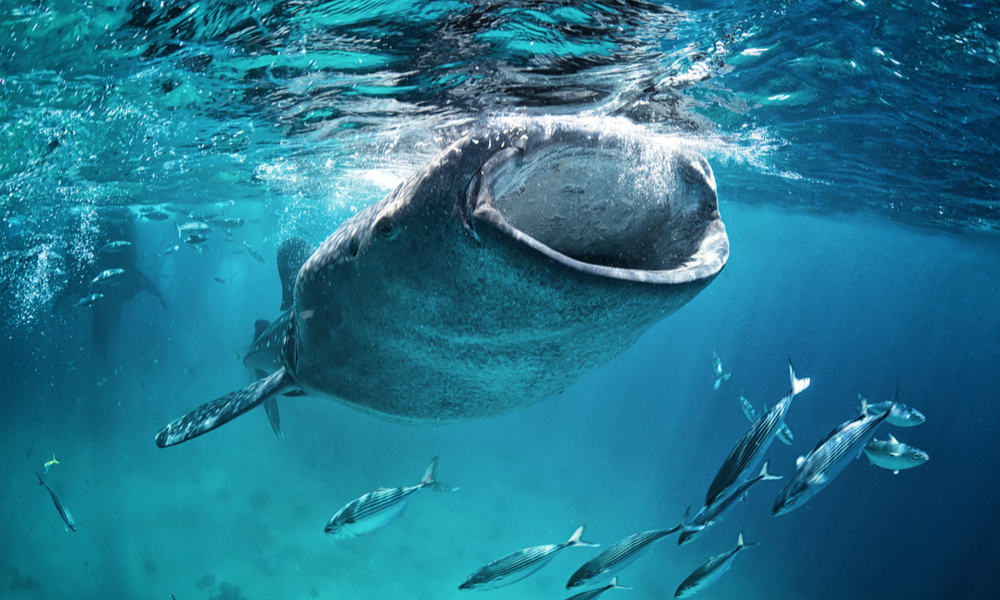 The whale is a term for numerous species divided into two major groups, Baleen whales and Toothed whales. The primary difference between these two types is in the way they feed.

These giant marine animals live in all oceans worldwide, including widespread species and those reduced to just a few individuals humans can barely meet and see. Let’s find out what do whales eat and interesting facts about these magnificent creatures.

What Do Whales Eat in the Wild? 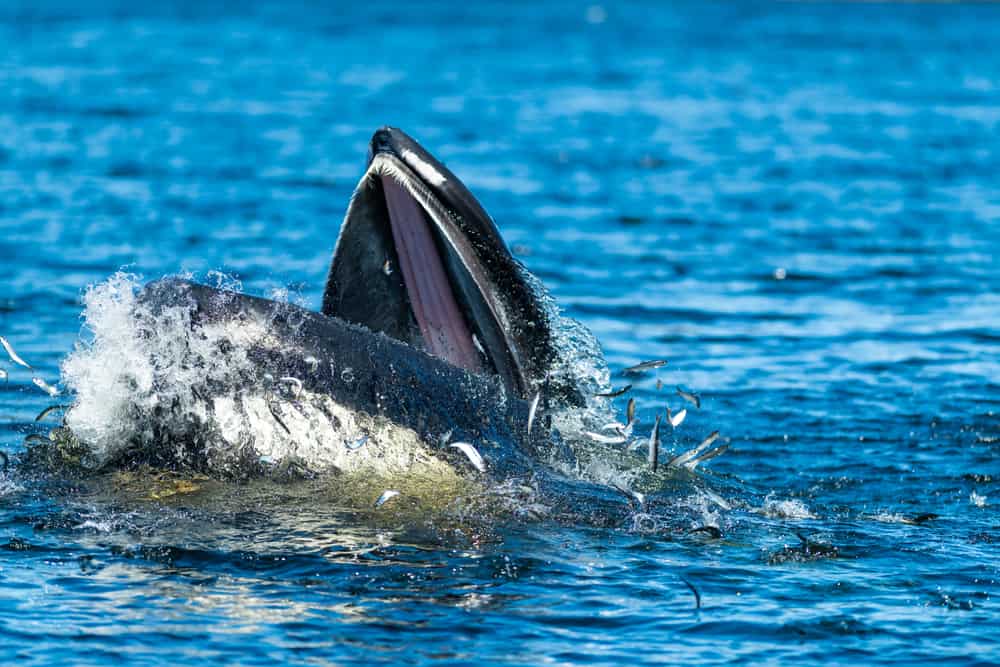 There are two different whale types when it comes to their diet and a way to get food.

Baleen whales use various techniques to get feed and can go hunting alone or in a pod. These marine animals primarily consume:

Typically, Baleen whales filter food through baleen bristles. These filter-like organs allow water to leak while prey stays in their mouth and end up swallowed. The only exception is the Gray whale that rolls on its side and eats crabs, plankton, larvae, and small fish from the ocean’s bottom.

Most Baleen whales enjoy summer feeding for four to six months a year, while the next few months spend migrating and breeding. One whale typically eats 4% of its body weight daily and stores excess energy as fat, particularly in the blubber.

Interestingly, these animals can spend months without food during migration and mating thanks to gained blubber. Scientists estimate that wales’ daily feeding rate in winter is not higher than 0.4% of body weight.

Toothed whales are predators that have mouths with a row of sharp, conical teeth. They usually hunt and eat fish, and each species has its own favorite fish type.

Most Toothed whales use echolocation to locate prey. They emit a clicks series and define prey position after bouncing off it. The whale will hear echo and precisely determine:

Some pods develop unique hunting techniques. The favorite one is when a few pod members rush prey from one side while others wait at the other side to catch it.

Unlike other species, Sperm whales eat one particular prey type, giant squid. They typically eat 3% of their body weight a day. If you know that these giants are 10,000 pounds (4.5 metric tons) heavy, you can quickly calculate that an average whale consumes about 300 pounds (136 kg) of squid daily.

On the other hand, the diet of the Killer whale (orca, the wolf of the sea) primarily depends on the population. They are at the top of the aquatic food chain without any predators, so they can choose what to eat.

Sperm whales enjoy eating octopus, fish, and large squid. They dive over 3,000 feet (915 m) underwater and can wait there for prey for an hour. They probably hunt and eat more than 220 billion pounds (100,000,000 metric tons) of squid per year.

Humpback whales are unique and often hunt in a group. They usually swim around fish schools and blow bubbles until forming a wall and trap fish. Other pod members will make loud noises, scare the fish, and force them to go to the surface. That is the moment when whales wide open their mouth and capture prey. 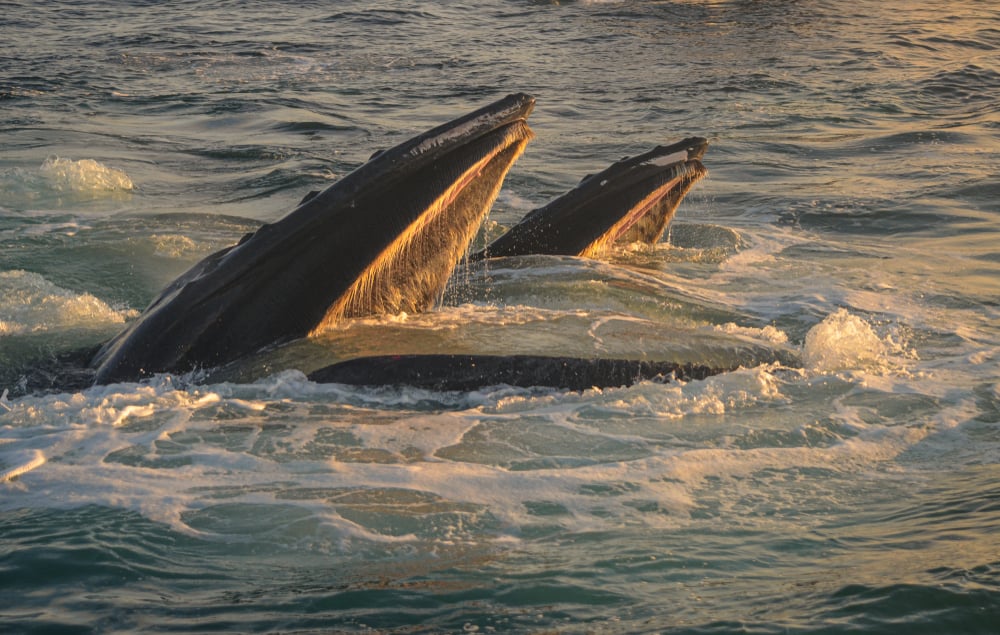 Whales are warm-blooded mammals that need air for breathing and give birth to live calves that suckle their mother. Females give birth to only one calf in 2 to 3 years after a 9.5 to 17 months gestation, depending on the species. Mom whales push their newborns to the surface to take a breath, and they almost immediately start swimming.

As a result of intensive whaling, the whale population was drastically reduced in the 20th century. Even though this activity was globally banned in 1982, smaller Toothed whales are still at risk of getting caught accidentally.

Nowadays, you can recognize two whale types, Baleen and Toothed, which differ in:

Nowadays, there are 16 Baleen whale species, and all of them are larger than 73 existing Toothed whale species.

Baleen whales are the largest living being worldwide, and the Blue whale is the most sizable creature that has ever lived on Earth. Paradoxically, they feed on the teeniest animals living in the oceans, including:

They use baleen plates to strain huge amounts of seawater and eat all small animals caught inside their mouth. Most Baleen whales are migratory species that follow the precisely defined migratory pattern, depending on the season.

They can’t echolocate but make sounds like singing, short pulses, and moans to:

Baleen whales are grouped into:

All Rorqual whales are streamlined and slender with flippers and pointed heads, but members of this group significantly vary in size. The Blue whale can reach 110 feet (33.5 m) in length, while the smallest Minke whale is only 30 feet (9 m) long. They use throat grooves to separate food from huge quantities of swallow seawater.

The big head measures about a third of the whale’s total length, and it continues to the back without a dorsal fin. These slow swimmers use their long baleen plates to filter seawater and pick out necessary food.

The pygmy right whale is a mysterious creature that typically grows up to (6.5 m) and weighs 7,500 pounds (3,400 kg). It is rarely seen at sea in the southern hemisphere, and scientists know very little of this species. They even don’t know their exact range.

The gray whale is the most coastal species that grows up to 50 feet (15.2 m) long. It lives in shallow water, where swimming on its side and feeding on prey filtered from the muddy seafloor. It is known as the mammal with the longest migration path.

Toothed whales are predators that use echolocation (biosonar), a unique sense that helps these giants in hunting. It allows them to navigate through the darkest places underwater and effortlessly catch prey.

These marine animals are very social and typically live in pods, and enjoy spending time together. They are highly intelligent with complex behavior and the ability to teach and learn. You can recognize six Toothed whales types, including:

The Sperm whale is the biggest Toothed whale that grows up to 65.5 feet (20 m) and weighs an impressive 130,000 pounds (60 metric tons). You can see this magnificent animal in all oceans where it hunts giant squids at incredible depths of 2 miles (3.2 km).

About 40% of the body length is its box-shaped head that keeps the biggest brain of all animals on Earth and oil-filled spermaceti organ that allows echolocation.

These dolphin-sized whales live in deep, warm water. They also have a spermaceti organ and a typical narrow lower jaw.

These mysterious whales live in deep water and feed with squids. Scientists know very little about this whale type, and no one has ever seen some of the species alive. Most of them are extremely rare.

These unique Toothed whales without dorsal fins live in pods that inhabit cold arctic waters. Calves are grey at birth, but they become white as adults. Narwhals are quickly recognizable, thanks to their long tooth.

Whales’ diet primarily depends on their size and mouth anatomy. Scientists divide these creatures into two groups, those who filter food from seawater and predators that go hunting for a meal. In any case, you can admire their impressive size, which is immeasurable with any other living being on the planet.