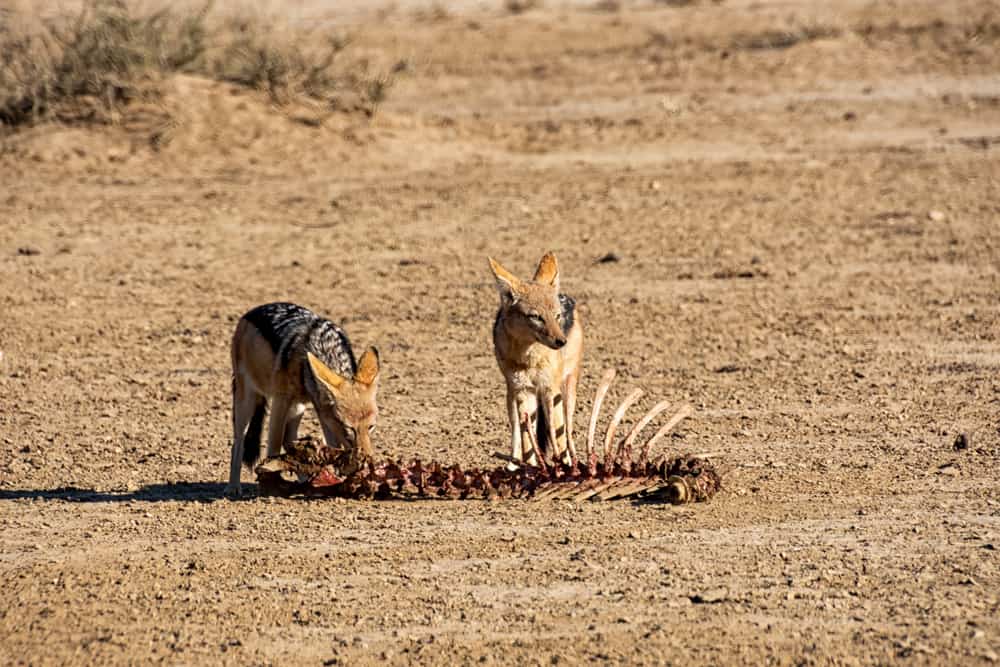 Did you know that each jackal family has a distinct yipping sound that only members of their own family understand (think of the way you and your friends may share a special handshake)?

Jackals are an intelligent species of the Canidae family, shared with foxes, wolves, and other dog family members. Although there have been cases of domestication, these foraging animals are not the cuddly type.

Habits and Biology of Jackals 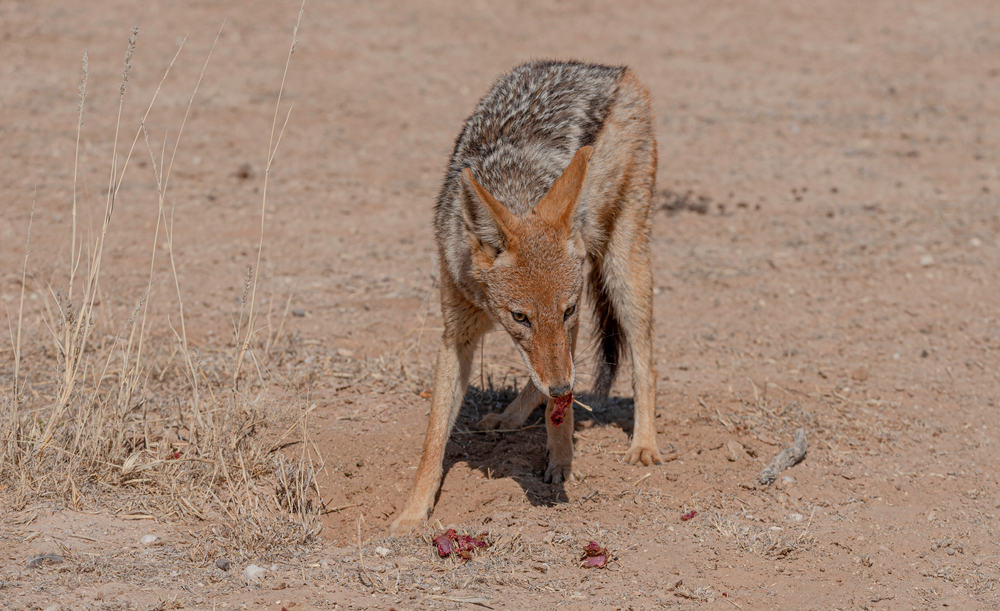 Jackals are wolflike carnivores that grow approximately the size of domestic dogs. However, these wild animals live throughout the open country of Africa and Eurasia.

According to Wolf Education & Research Center, the three jackal species include the golden, black-backed, and side-striped jackal.

The black-backed jackal prefers the woodland and savannahs of eastern and southernmost Africa. Consequently, this species has two distinct groups, separated by almost 900 kilometers of rugged terrain.

The side-striped jackal enjoys the moisture areas of tropical Africa, making homes throughout the savannas, marshes, and mountains of the central and southern regions.

The common jackal, better known as the golden jackal, lives throughout northeastern Africa, southeastern Europe, and South Asia. This species is the largest jackal species, and it’s said to be more closely related to the gray wolf.

Jackals are semi-social creatures found living alone, in pairs, or even within small groups, called packs or tribes. In any case, the jackal species are territorial and will not hesitate to use their teeth and claws to protect their homes.

As with any wild animal, jackals depend on their specific environmental adaptations for survival. For instance, jackals can easily reach speeds of up to 40mph and maintain a long-distance running speed of approximately ten miles per hour.

VIDEO: Take a look at how this jackal uses its hunting prowess to seduce its prey.

Jackal cubs are born in discreet locations, including caves, rock crevices, and underground dens. Therefore, a jackal’s fierce protection of its territory is necessary to protect its homes and cubs.

These animals compare to the North American coyote in that they are both small to medium-sized predators. And, unfortunately, people have given jackals a lousy reputation because of their scavenger-type tendencies.

We all have to eat, right.

What Do Jackals Eat in the Wild 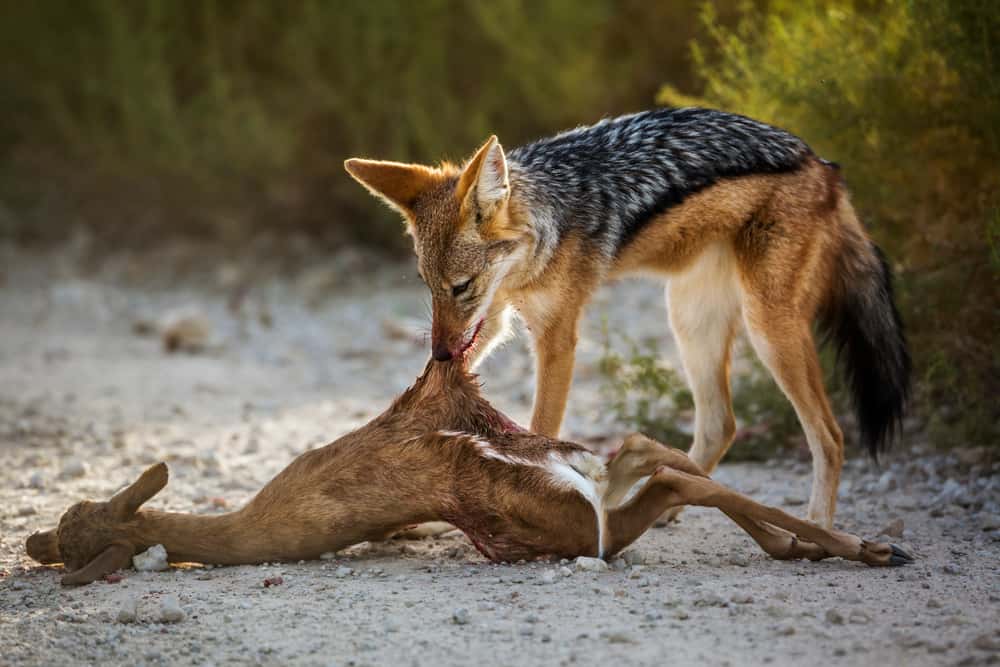 Jackals are opportunistic omnivores meaning they are not picky at all about what they eat. We wish we could say the same for some of our kids. Just kidding!

The truth is that jackals are capable hunters with their long legs and curved canine teeth. Typically, they understand their limits and will not chase larger animals.

In general, jackals are both nocturnal and diurnal; however, the side-striped species is strictly nocturnal. Often, jackals prefer concealing themselves by day amongst the available coverage of the landscape so that they can begin their hunt at dusk.

Although hunting alone is feasible, jackals tend to employ cooperative hunting in pairs or even small groups. As a result, they tend to be three times more successful on their hunt and even have better chances against a larger animal if they so choose.

FUN FACT: Jackals transport food back to their den inside their stomachs and later regurgitated to feed jackal pups or provide additional nutrition to lactating moms.

Cooperate hunting can generate more significant kills for their den, such as antelopes, gazelles, impalas, or some weakling from another fly-by herd.

But jackals have no shame in their game; they are not out to win a hunting trophy but more focused on getting food. To this end, jackals are also known to follow big cats to scavenge the leftovers from prey killed.

In addition to the larger animals made available through cooperative hunting, jackals typically hunt seal cubs (like in the video you watched), lizards, snakes, rodents, hares, fish, or ground-dwelling birds (guineafowl).

In more domesticated habitats, closer to the human population, there have been reports of jackals predating livestock such as goats, sheep, and cattle. Then, when necessary, jackals will gladly settle for carrion, the decaying flesh of dead animals.

Its interest in crops and other livestock has increased human predation of these canines in recent times. Nevertheless, the jackal population is unknown but stable.

While eating, if an intruder enters the jackal’s area, it will bury its food for later excavation and consumption. Jackals listen to their bodies and work their way down the food chain if a big meal is unavailable.

In short, jackals adapt their diet to both the local environment and to what is readily available. The risk-averse behaviors that jackals exhibit during hunting time happen to be just one of several exciting characteristics of life as a jackal. 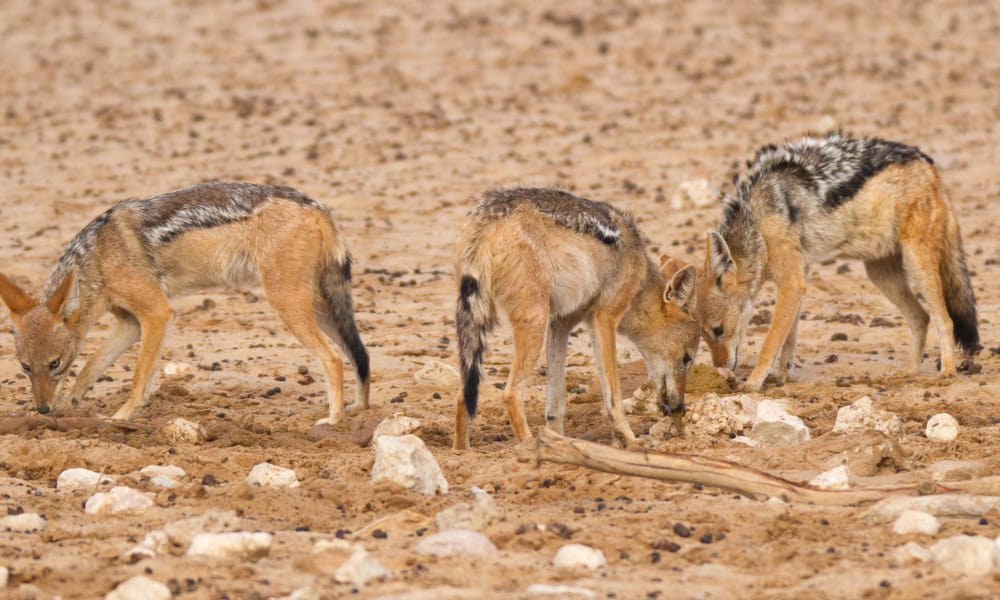 Life as a jackal is exciting from the time of their birth as a cub. Not only are they born to loving families, with lots of help, but they also enjoy plenty of traveling.

Jackal pups are born in a den within the marked territory of their parents. Like domestic dogs, both male and female jackals spray their urine to mark the boundaries of their home.

The cubs are lucky to have both a mother and father figure in their lives. But, interestingly enough, jackals are one of the few mammals that have a genuinely monogamous relationship.

In most jackal families, one or two adult helpers stick around to help the parents care for and protect the youngest cubs. Often is the case that these ‘helpers’ are older brothers or sisters that stick around until the next litter reaches maturity.

Throughout the first two months of a cub’s life, the mother jackals initiate a den change every two weeks to prevent being sniffed out by large predators.

During this critical time in a cub’s life, they are fed regurgitated food and suckle on their mother’s milk to gain strength. By three months of age, the jackals leave the den environment and begin to follow their parents for on-the-job training.

At six months of age, jackals begin hunting on their own- a skill set they will sharpen throughout an average of 10-12 years of life. But of course, this can only happen if they survive the first fourteen weeks of life when pups are most vulnerable for predation by eagles and larger animals like hyenas and leopards.

One characteristic of the jackal that I found most interesting is its sense of loyalty to family. But, perhaps, just as fascinating, is the jackal’s different forms of communication.

Whereas one howling sound may signal the rest of the pack to come and enjoy a catch, another may be a warning against intruders. For example, side-striped jackals of tropical Africa use a special call resembling the hoot of an owl to assemble their families.

As we noted earlier, the jackal’s communication line is so fine-tuned that members outside of the caller’s specific group will not turn to answer.

These animals have shared a place in history throughout time, have been part of fables and myths cross-culturally, and are even biblically referenced several times. They share a similar connotation of trickery, as does the fox in Europe or the coyote in North America.

Anubis, instead, is the “god of mummification and the afterlife as well as the patron god of lost souls and the helpless.” In both cases, the jackal carries some superstition dealing with the cycle of life and the spirit world.

On the other hand, it is used as a literary device in the Bible to illustrate “desolation, loneliness, and abandonment.” Perhaps the reference refers to the areas that are a jackal’s natural habitat.

Regardless of whether or not the jackal is a capable hunter or family-oriented animal, its biblical depiction is enough to make me sure of one thing- I do not want to bear the reference as someone who leeches or benefits on the backs of others. Ouch!!

The jackal has earned its place and plays a critical role in our earth’s ecosystem. Let us continue observing and protecting these animals and ensuring that our human endeavors do not trample upon their natural environments.

Myths, superstition, and sorcery aside, we can agree that the jackal is both an intelligent and profoundly cunning animal that physically resembles a domesticated dog.

However, let’s be clear about one thing: its sheer tenacity and grit, paired with its loyalty to family, makes a strong case for how well this species has continued to thrive over time.

Comment below with questions or concerns you have about the life of a jackal. Please feel free to share an experience where you observed these animals in the wild. Pictures are worth extra credit.