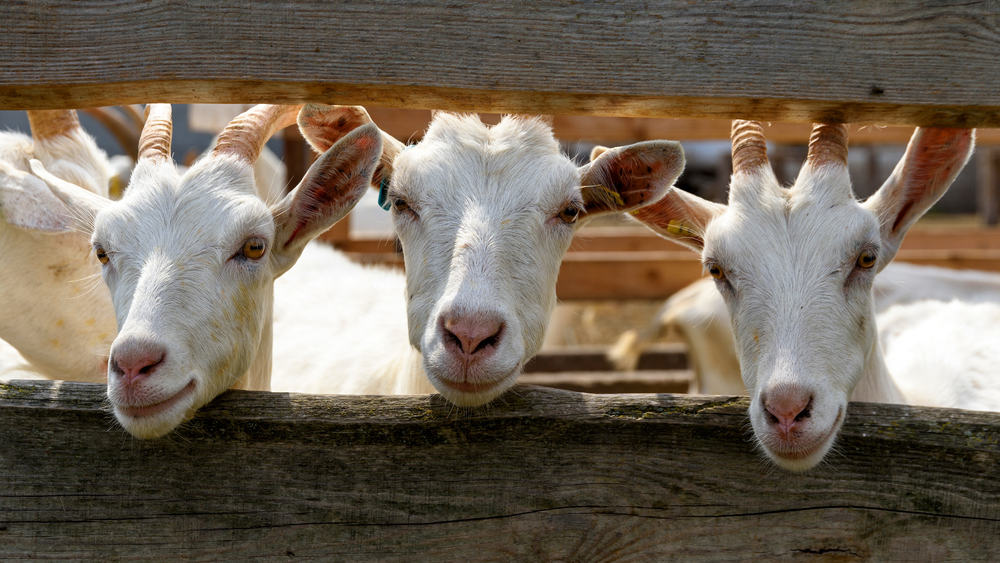 The goat is one of the first animals humans managed to domesticate, so it is not surprising that the goat symbolism goat is present in many folk tales and myths around the world.

However, it is interesting to note that the interpretation of this animal and the values it represents changed throughout history.

Goats were first used as a symbol of fertility, virility, and lust, but then they started to be identified with meanings such as independence, ambition, persistence, and disobedience.

Although most of those associations have persisted to today, thanks to their representation in religious scriptures, goats have also started to be linked with the devil and evil. 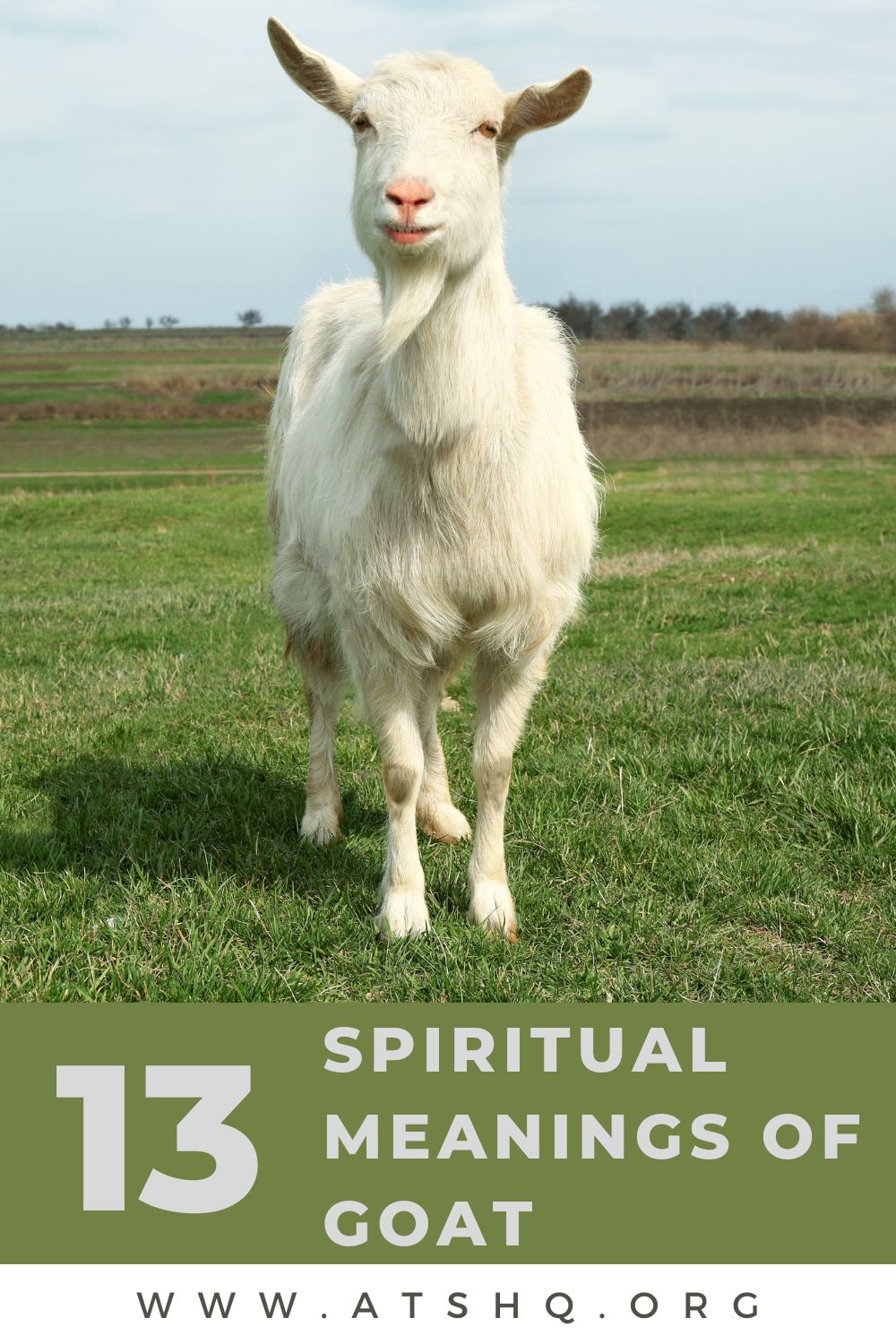 Over the course of human history, the goat has been a powerful symbol of independence, sacrifice for a higher goal, and indeed a symbol of willingness to resist all obstacles on the way to success.

People who are persistent and methodical in reaching the desired goal but also cautious and suspicious are given the epithet of goat precisely because this animal embodies many of these symbols.

Perhaps the most prominent role in the fact that the goat represents this kind of symbolism has to do with its horns, which at first look intimidating but are used mainly by goats to fight off predators instead of attacking other animals.

Since goats come under attack a lot and are also known to roam some of the most demanding roads, they and their horns have become associated with stoicism, the ability to almost ascetically and stubbornly endure all possible difficulties and hurdles in life, and the courage to go where no one else would dare!

On the other hand, goat’s milk is synonymous with health and longevity, so it is not surprising that goat was associated with fertility, wealth, and abundance in old pagan traditions.

What, for some, is a symbol of self-reliance and stubbornness, for others, it represents disobedience, defiance, and self-destruction. In Christianity, the goat was used as an epitomisation of evil due to its physical and psychological characteristics.

In Mathew 25:31-46, it is said that God, when all the nations are amassed in front of him, will leave on the right side the sheep, that is, those who have done good and who have merited eternal life, while on the left will be the goats, who are condemned to eternal hell.

Goats are also mentioned in a negative context in the Hebrew Bible. Every year Jew celebrates the Day of Atonement, Yom Kippur, during which they are reminded of the sin that separated them from God.

According to Leviticus 16, instead of the sinner’s death, God announced that he would accept a substitute – a death of an animal.

Lots were drawn between them to determine which one would be offered as a sacrifice and which one, the scapegoat, would be taken and left in the desert to bear the sins of the Jews. 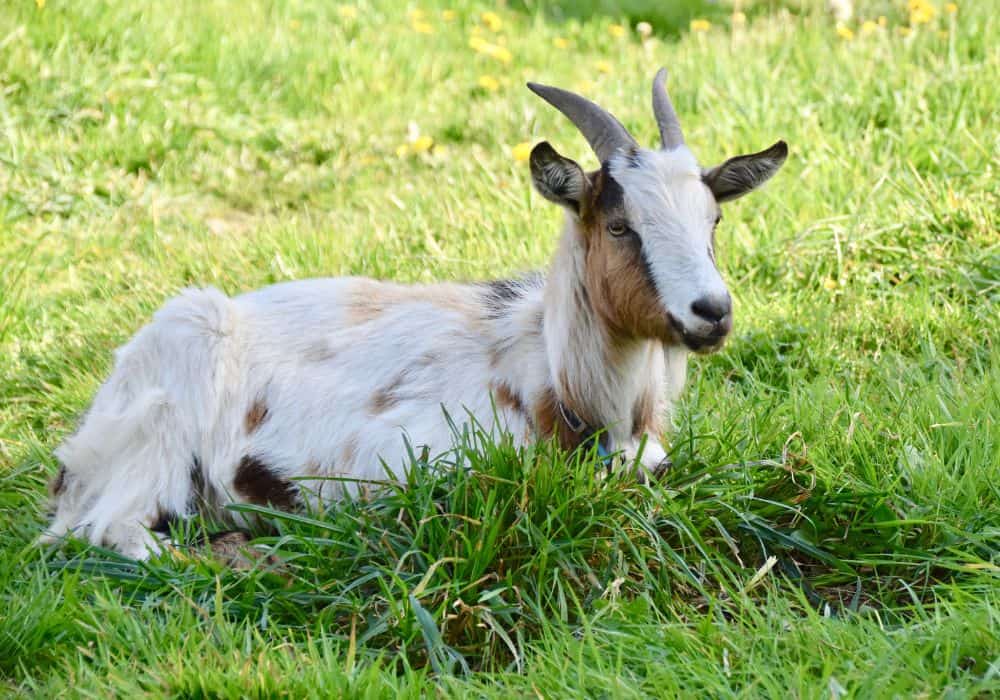 Thanks to the portrayal of the goat in Christianity and Judaism and the fact that it was widely used as a symbol in pagan mythology, so worshippers of evil started using it in their writings.

Baphomet is a fictitious pagan deity supposedly created by the Templar knights who worshiped him as an idol sometimes in the 14th century.

However, it was popularized by the French occultist Eliphas Levi during the magical revival in the 19th century. In his book, Transcendental Magic,

Levi described Baphomet in the form of the Sabbatical Goat, after which it became the central figure of Satanism and the embodiment of Satan, the entity that personifies the evil in three major Abrahamic religions.

According to one version of the myth, Zeus was nurtured by the nymphs Adrastea and Ida in Crete, in the cave of Mount Ida. They would put the baby in a golden cradle and feed him honey and milk from the goat Amalthea.

Later, when he became the master of the world, Zeus repaid his foster mothers by placing them among the stars.

However, according to another legend, Amalthea is a goat with magical horns that raised and fed little Zeus on her own.

Either way, the story associated with the goat horn is the same. When he was a child, Zeus broke the horn while playing. As a sign of redemption and apology, he later blessed it and said that the horn’s owner would always obtain whatever they wanted.

In that way, the horn, called Amalthea’s horn or cornu copiae, became a symbol of abundance and good luck. Amalthea’s horn is also one of Zeus’ attributes in his iconographic representation.

The word tragedy, which is comprised of Greek words tragos, meaning goat, and oide, meaning ode or song, can be translated as goat’s song. The exact origin of the word is, however, unclear.

According to the most common story, tragedy is connected with the goat’s song because in Greek mythology, Dionysus was a fan of goats, and he liked to listen to their songs.

He was not only the god of wine but also fertility and enjoyment and enjoyed the company of cheerful creatures called satyrs.

Satyrs are half-humans and half-animals who, unlike the other gods, are not immortal but are demigods who haunt forests and follow Pan or Dionysus.

They were depicted in different ways, but the most common depiction is the satyr as a mythological creature that is half goat and half man. They represented lust and drunkness.

Last but not least, Pan, god of the wild, forests, shepherds, and hunters, was often described as half-man and half-goat because of his appearance.

He had a goat’s hind legs, horns, and tail, a male goat’s ears, and beard, and his body was covered with hair, while his human physical characteristics included a head and a torso.

Heidrun is a mystical goat in Norse mythology. It lived on the top of the castle of Valhalla, which is god Odin’s castle and the hall of dead heroes.

According to a legend, Heidrun eats the leaves of the Lerad tree, i.e., Yggdrasil, and produces the mead that the warriors from the castle drink.

This goat is also mentioned in the poem “Grímnismál” from the Edda, in which a large snake poisoned the roots of a tree with its poisonous breath, while the green leaves served as food for Odin’s goat Heidrun, and four deer Dain, Dvalin, Duneyr, and Durathor. 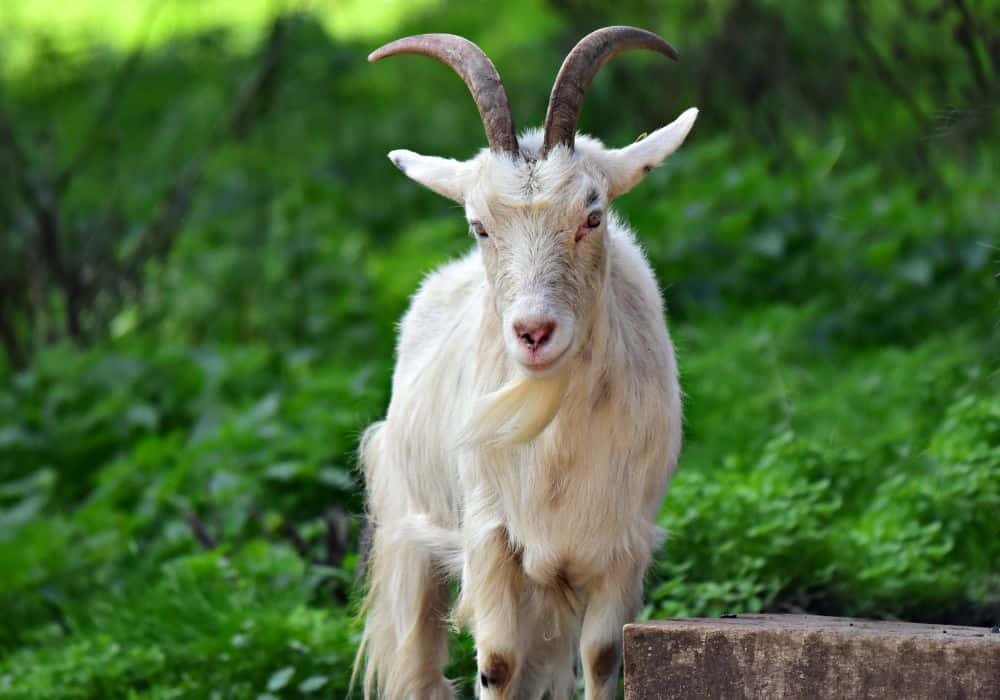 We can perhaps best see how influential and respected the goat is as a symbol in the example of Celtic mythology since they have been celebrating the goat and the values it epitomizes in the form of a festival that is held to this day.

The goat is most closely associated with puca (or poc), a creature of Celtic folklore with human and animal features, such as a goat’s beard, ears, and tail. Puca or puck translates as he-goat or male goat and can be found as a symbol in Irish and Welsh culture since ancient times.

A festival called the Puck Fair or the Fair of the He-Goat is held every year in Killorglin, Ireland, to honor the goat. A wild goat is crowned the king of the town by a young girl, after which it is put into a cage where it will stay for three days during the festivities.

Although the first official mention of this festival was in 1613, when King James I gave permission for a fair to be held legally in Killorglin, its origins are likely much older. Two stories are most often cited as the reason for starting the festival.

According to the first one, the festivities started being held in honor of a wild goat that flew to the aid of the inhabitants of Killorglin in the 17th century and warned them of Oliver Cromwell’s attack during his conquests of Ireland.

The second goes back much further in history, and according to it, the Puck festival is actually a continuation of the Lughnasa festival.

Lughnasa was a pagan festival held every year on the first of August in honor of the harvest. Since the goat has long been associated with the pagan god Pan, it was also a symbol of reproduction, fertility, and vitality among the Celts and a symbol of this festival.

The goat is a widespread symbol, also mentioned in Hindu mythology, and not just as a god feature.

Naigamesha is a deity similar to Pan and represents the same things – fertility and virility. However, unlike Pan, this god has a goat’s head (horns, goatee, ears, etc.) and a human body.

In addition to being a deity, the goat is mentioned in Hindu scriptures as an animal used by gods, so goddess Kali, the deity of ultimate power and time, doomsday, and death, rides a goat, while Agni, god of fire and Kuber, god of wealth ride a ram. 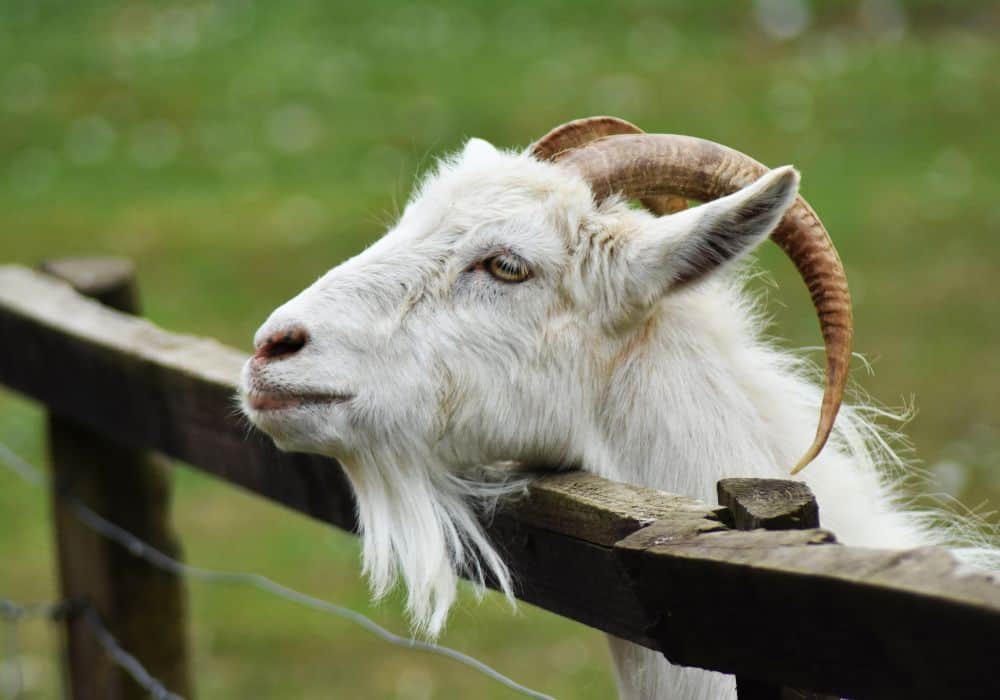 Goat is the eighth sign of the Chinese zodiac. According to it, people born under the goat sign are usually gentle and rather shy persons who are creative, cultured, and well-mannered.

As friends and partners, they are matched by emotional people who provide them with security in life. In addition, they like to take care of other people.

As personalities, they are quiet, reserved, and calm. They don’t want to be in the center of everything and prefer to be in the background, watching everything from the side and not overshadowing their friends with their stories.

We find something similar in Western astrology, where the goat appears in a slightly different form (Capricorn sign) but carries almost the same symbolism: persistence, stubbornness, sacrifice, steadfast character, and great ambition.

People with a goat as their spirit animal are characterized by seriousness and ambition. They are mostly traditional and very serious people. They may have a hard time accepting the differences of other people who deviate too much from their character, so they can act aggressively trying to impose their traditional values.

Goat spirit energy is such that the people who possess it prefer solitude, so it is more difficult for them to deal with large groups. In addition, these melancholic and somewhat phlegmatic people have a firm and unrelenting outlook, sometimes making them look cold and reserved.

Having a goat as your totem animal shows that you have the independence that enables you to make significant progress in your private and business lives. Thanks to your persistence, you can overcome all handicaps in life, and your strength is aimed at achieving personal satisfaction.

Goat dream means that you need to try to find an answer to a question that is bothering you. It also usually symbolizes a warning not to be gullible, to trust primarily in yourself and your abilities, and is a message that the fastest way to the goal is not always the most efficient!

Even the well-known saying “fortune follows the brave” takes on a whole new meaning when we look at the goat path and wonder how anyone manages to get there.

Hardly any animal can compare with the vast symbolism represented by the goat.

Whether it is positive symbols such as stubbornness, independence, belief in oneself, fearlessness, and fertility, or negative ones such as disobedience, destruction, and eternal exile, we as humans will forever find certain parts of our nature in goats.

If you would like to add even more to the seemingly endless meanings goats have or ask a question, don’t forget to comment.