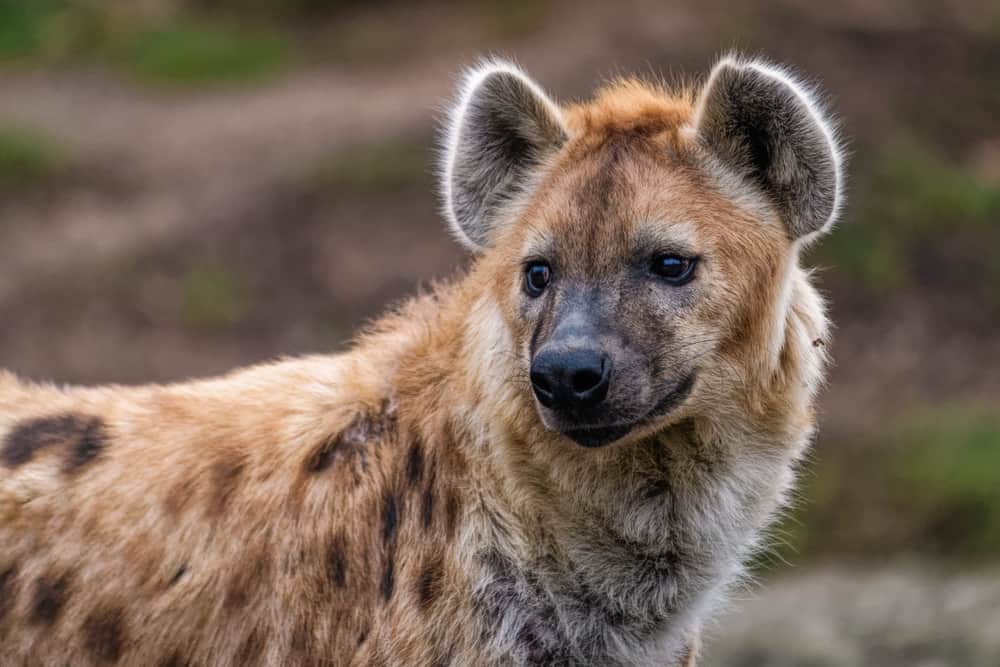 Is it because of their giddy laugh or their role as villains in Disney’s The Lion King? Or because we all wrongly assume they only rob food to survive? Sadly, hyenas are often the world’s most misunderstood and demonized animals.

But behind all these falsehoods lies one of nature’s most exciting hunters! Today, we’re going to dispel all those misconceptions – and reveal to you just how unique hyenas are.

As one of Africa’s apex predators, we will examine their fascinating biology, what hyenas eat, where they live, and fun facts about these laughing, meat-eating machines!

What do hyenas eat?

Hyenas are carnivores, meaning they eat the meat of other mammals. Because they are primarily found across the savannah of Africa, wild hyenas eat a variety of grazing mammals, rodents, and insects. They may also eat fruits and scavenge the dead bodies of other animals.

Hyenas are not too picky when it comes to their meal – they have a huge appetite and need a constant supply of energy to roam their territory. And because packs can have huge numbers, the animals they kill will often have numerous mouths to feed.

Let’s take a closer look at what exactly each type of hyena eats and how: 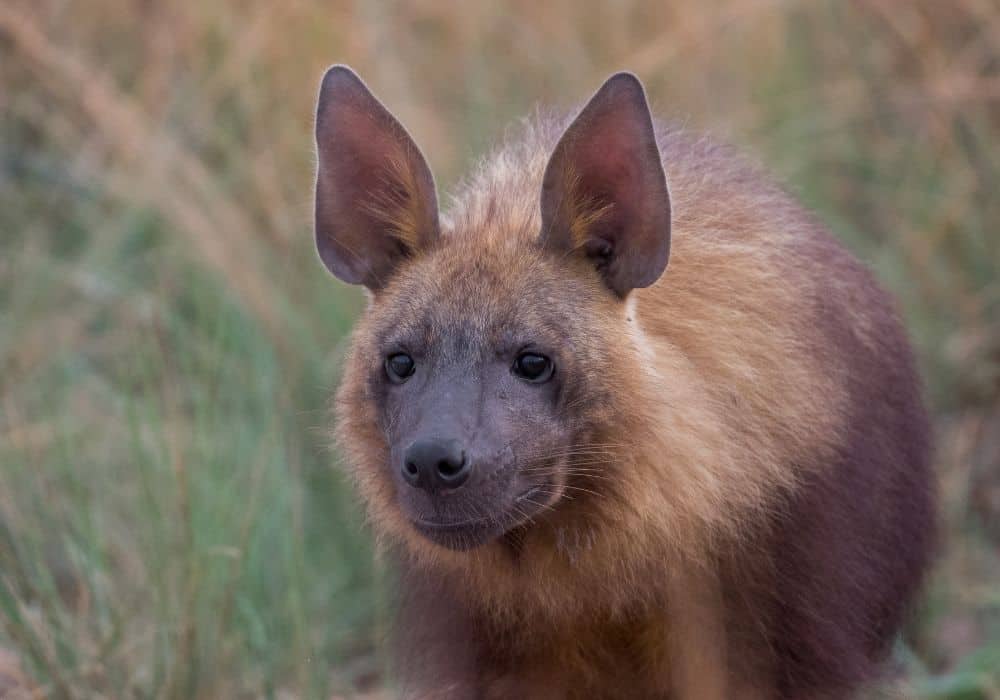 Brown hyenas are primarily scavengers. They use their strong sense of smell to scout and locate dead animals in their territory. Because they don’t have to use their energy for hunting big animals, the little food they can strip off the carcass is worth it.

It’s not just the meat that interests the hyena. Their jaw is strong enough to break open bones, allowing the hyena to feed on the marrow inside for nutrients. 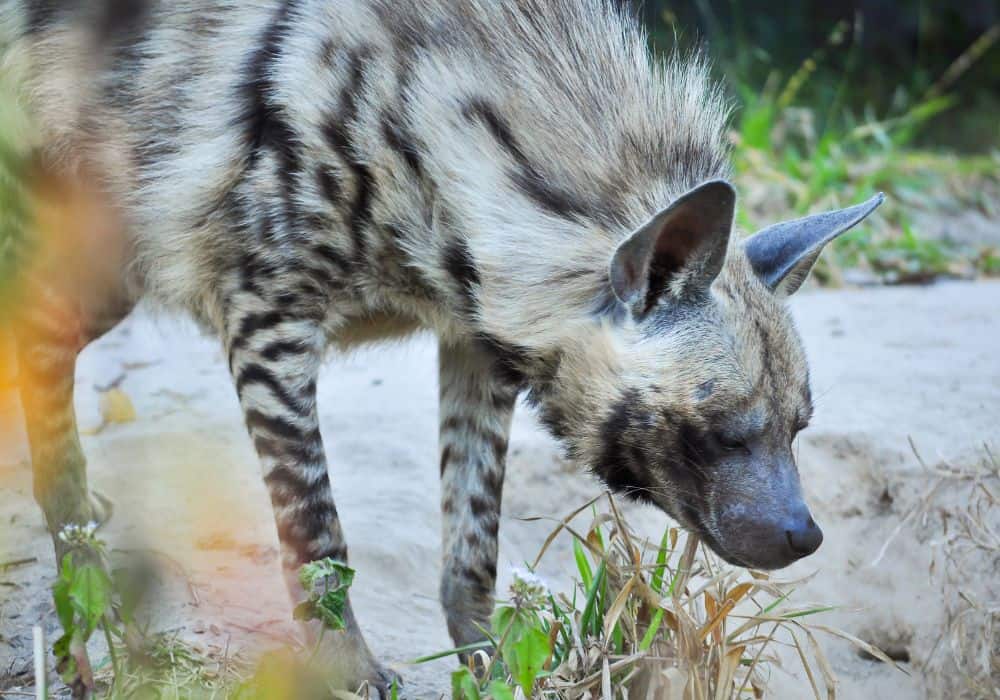 Like the brown hyena, the Striped Hyena is a scavenger and will happily locate and feed on leftover prey. All body parts are consumed, thanks partly to their powerful teeth and jaws. The hyena has a specialized digestive system that extracts nutrients from bones, teeth, hooves, and horns.

Striped hyenas are also foragers and will eat local farm produce, including melons, peaches, cucumbers, and dates. They will also actively hunt small reptiles like lizards and snakes and insects like moths, grasshoppers, and termites.

The striped hyenas often live and hunt independently or in pairs. 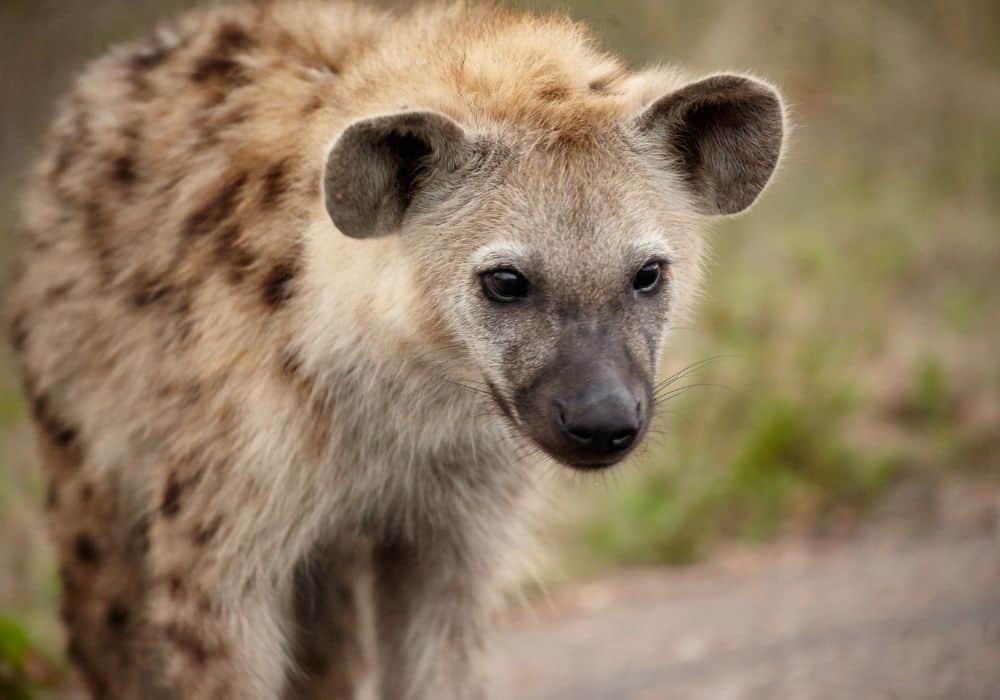 Perhaps the most recognizable hyena of all is the spotted hyena. These carnivores are agile, tactical, and highly effective hunters on the African savannah.

If on their own, spotted hyenas will primarily hunt smaller animals like foxes, jackals, porcupines, and hares. But when working together as part of the pack, they can easily take down medium-sized grazing animals like zebra, wildebeest, gazelle, and impala when hunting in packs.

Spotted hyenas have ferocious appetites and can eat anywhere from 14kg of meat in a single meal. They are also the most social of hyenas and will often live in packs as big as 100. With numbers, this big, groups must often hunt numerous times daily to ensure everyone gets a fair share of food.

Because they work in such large numbers, they are one of the few carnivores that can sometimes take down elephants, antelopes, and the most deadly predator across the savannah – the lion.

Although primary hunters, spotted hyenas will scavenge dead animal bodies and hunt for insects if in desperate search of food. 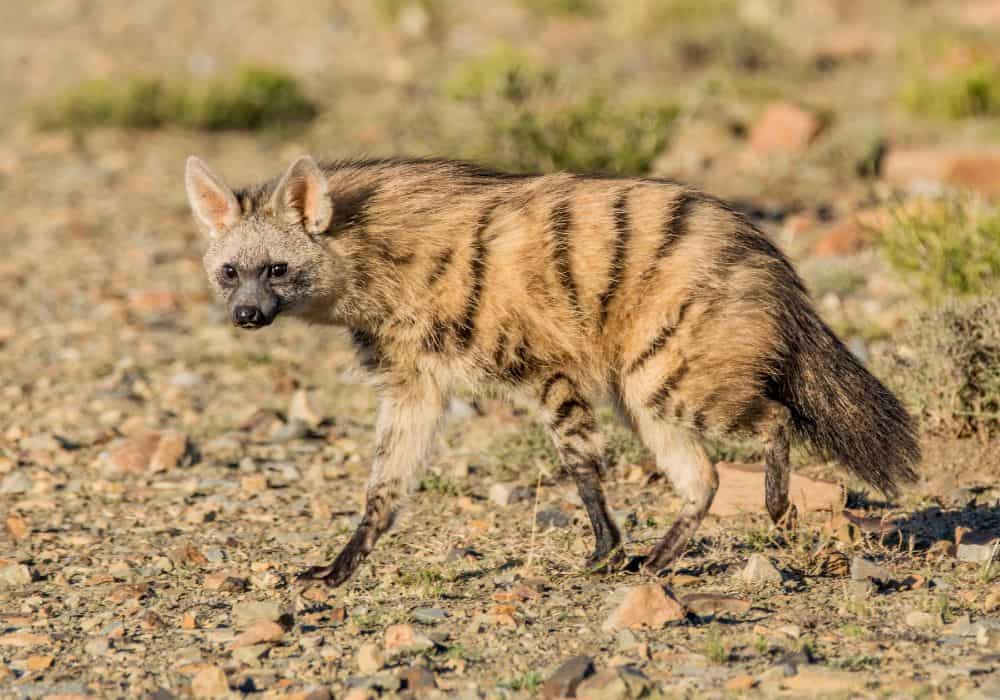 As well as their name being wildly different from other hyenas, aardwolves also hunt differently.

The primary source of food for an aardwolf is termites! Lots and lots of termites. The aardwolf has been feeding on these insects for so long that their teeth are incapable of chewing meat.

Instead, they have excellent hearing that can help them detect termites moving underground. They then use their long, sticky tongue to scoop them up. Because they mainly feed only on one insect, aardwolves often live near termite habitats and can consume upwards of 300,000 of them in one night.

Aardwolves have been recorded to hunt small rodents and eat bird eggs, though these examples are few and far between.

What do their babies eat?

Hyena mothers are regarded as one of the best within the animal kingdom. Mothers will often give birth to 1 to 3 pups. These pups are initially defenseless, as they are born blind and deaf. They will feed off their mother’s milk for the first few weeks; afterward, they will eat meat scavenged by their mother.

How Do Hyenas Hunt?

When on their own, hyenas will only hunt animals much smaller than themselves. These are usually harmless rodents like hares and mice, insects, fish, and unattended bird eggs.

But when hunting larger animals, they rely heavily on teamwork. This is perhaps why many people falsely assume hyenas are a type of dog, as they often hunt like a pack of wolves.

They often prey on herd animals, trying to separate a weak member from its group or a mother and infant. They will often chase their prey to exhaustion, where it cannot effectively mount a defense against the pack.

Their powerful jaws lock on an animal’s legs, where they will bite and drag it to the ground. Nothing is left to waste – virtually everything from the body is consumed, including horns, hooves, teeth, and bones.

Hyena has several advantages when it comes to hunting. They can travel fast, upwards of 64km per hour, over long distances and on various terrain. They also have keen senses, including a powerful hearing to track prey, and sharp eyesight, even during nighttime.

Several scientistic studies have proven that one of the hyena’s critical strengths in hunting is their ability to work together. This study, for example, showed that captive hyenas could outperform many primates without any training when faced with cooperative tasks. They could even train other members of the pack to succeed with the problems.

Some animals do fight back

Though not everything is easy for the hyena, some large grazers can be dangerous. Animals like zebra, giraffe, impala, and wildebeest have strong legs. One kick can prove fatal to the much smaller hyena. They also risk being trampled during the chase and impaled by the animal’s long, visceral horns.

What are Hyenas’ predators?

Hyenas, mainly the spotted hyenas, are often regarded as apex predators or top of the food chain. Their only natural predator is the lion, whom they compete with for food. Lions and hyenas often fight when one lands a kill, and the other wants to take it away.

So who would win in a fight between a hyena and a lion?

Generally speaking, the lion will win. It is too strong and quick for a hyena to hurt effectively. Lions also have the added advantage of a set of powerful claws.

There are cases of hyenas preying on lions, but this is in those rare circumstances when there’s a massive pack of hyenas present versus a single lion who is elderly.

The only other predator of hyenas is humans. Because of their scavenging nature, hyenas often roam close to farms and villages to find food. Humans, protecting their livestock and crops, shoot them on sight.

Both spotted and striped Hyenas can kill a human, though they are only known to hunt when their food supply is scarce actively. However, in normal circumstances, hyenas are known to be wary of humans and avoid them if they can.