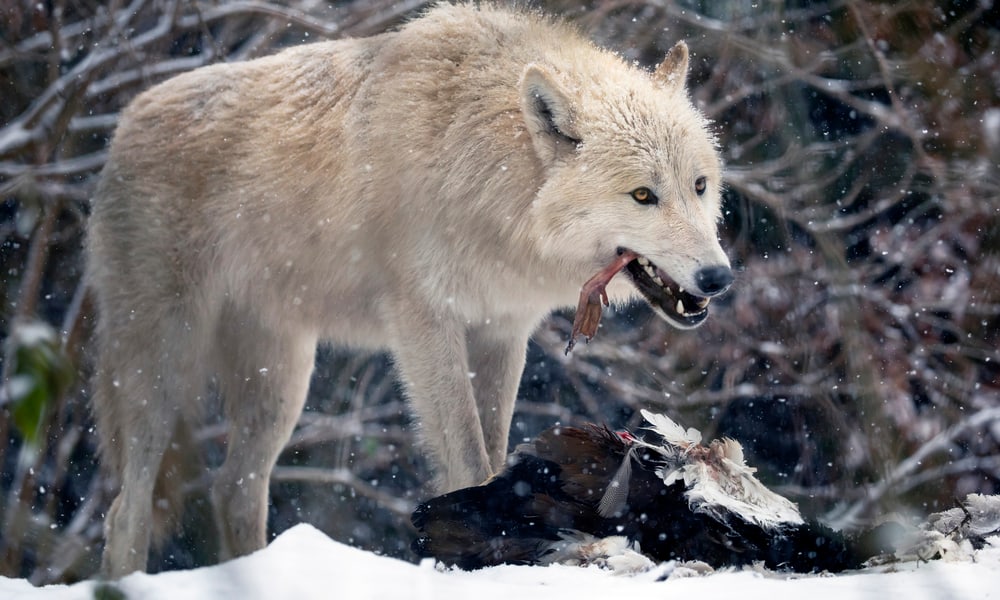 Wolves are such an intriguing animal that they frequently appear in myths and legend. Their habits have even given us the phrase “lone wolf”, used to mean a solitary person, sometimes a criminal.

But how much do we really know about these mysterious creatures? What do they eat? Where do they live? And how do they spend their time?

We’re going to take a look at all these questions. So step this way to find out more! 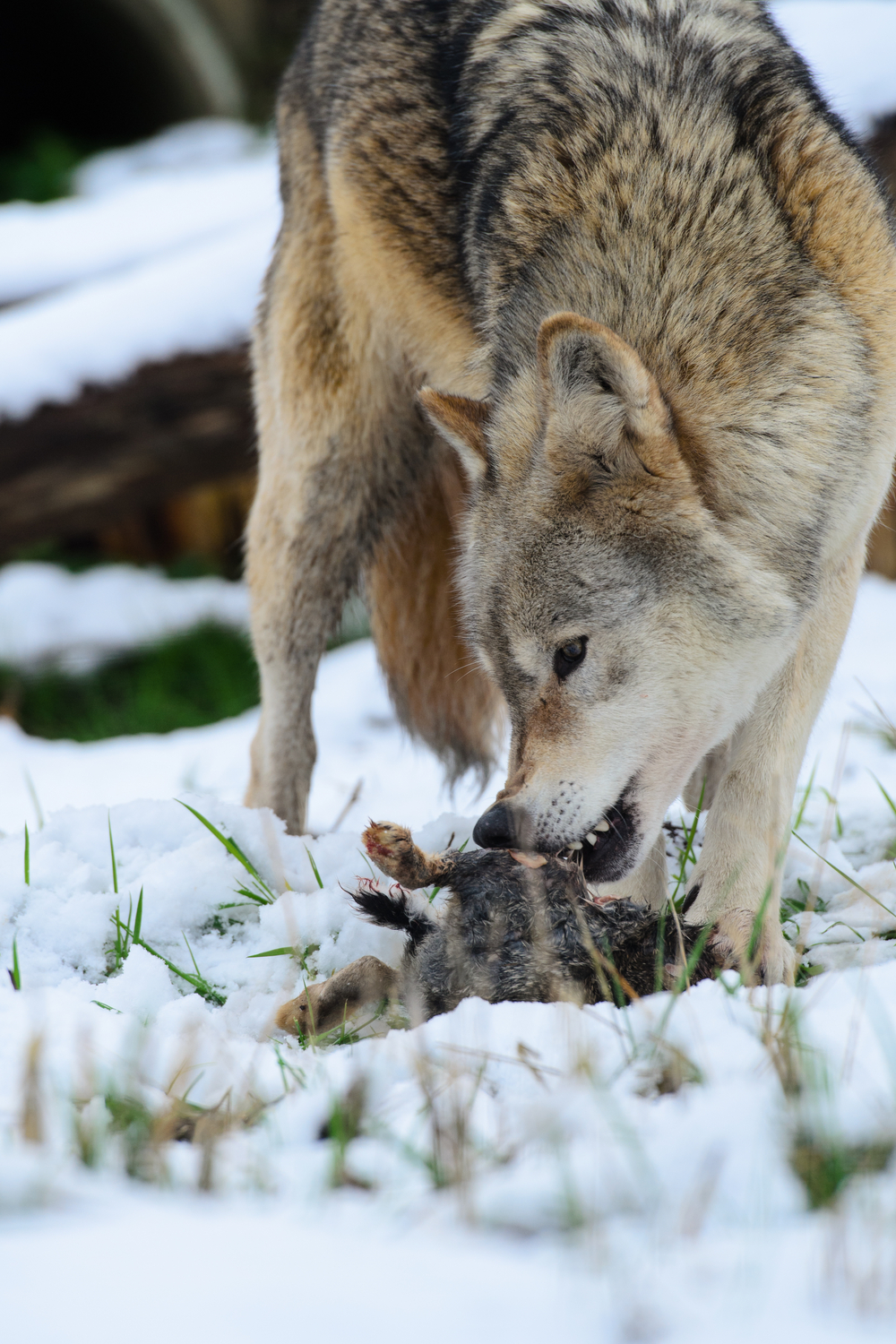 There are lots of different species of wolf, and two of those live in North America.

The gray wolf is larger, and lives in the north-eastern United States, parts of Europe and Canada. Despite its name, its fur can be anything from pure white to black. And it’s most commonly a pale, tawny shade of brown.

Its smaller cousin, the red wolf, has shorter fur with a red tinge. You’ll find red wolves in south-eastern parts of the USA.

There are also a number of subspecies, including the Arctic wolf and Mexican wolf.

Wolves are social animals, and they live in packs. These can vary in size from two to twenty, but most packs have between six and eight animals. A wolf pack has its own territory, and the wolves will work together to defend it and seek their prey.

Wolves are also very organised, with a strict hierarchy of both males and females within the pack. This is designed to keep the peace and avoid fights where animals could be injured. The top-ranking wolf of each sex is known as the alpha. Either the male or female alpha may lead the whole pack.

Interestingly, alpha wolves are not necessarily larger, stronger or faster than other pack members. What marks them out is their attitude and confidence.

Wolves have a range of ways of communicating with one another using sounds and body language. When a higher ranking wolf meets a lower ranking one, for example, he or she will display dominant behavior. That could include staring at the other wolf, tipping forward its ears and raising its tail.

Wolves also communicate by scent, urinating to mark out their territory. But their most striking form of communication is sound. And while they have a wide repertoire, including squeals, barks, shrieks, yips, growls and whines, they’re best known for their howl.

A wolf howling can be heard up to an astonishing 10 miles away. And different howls have different meanings. You can find out more in this YouTube video from Wochit Entertainment.

What Do Wolves Eat in the Wild?

Wolves are strict carnivores, and their favorite foods are hoofed mammals, known as ungulates.

Wolves hunt as a pack, but even so, the majority of prey will escape. It’s been calculated that around 85 deer out of every 100 will evade capture. Those that are caught are usually very young, old or sick.  This YouTube video from National Geographic Wild shows a pack of wolves on the hunt.

Although there’s a strict hierarchy in the wolf pack, it might surprise you to know that the alpha doesn’t always eat first. Instead, it’s usually the hungriest wolf that will take the lead in consuming prey. The rest of the pack will wait until he or she has had their fill.

Just as with humans, the type of foods wolves eat vary at different stages in their lives. The diet of a young pup is quite different to that of an adult. So what do they eat?

When they’re too old for that, however, they may still not be old enough to consume prey. Instead, adult wolves will regurgitate their own partially eaten food for the youngsters. The softer food will be easier for the young wolves to digest.

Both male and female wolves will do this. And adult wolves will regurgitate food for pups that are not their own young.

When they’ve captured their prey, they will eat as much as a fifth of their body weight at once. That will help tide them over during what might be a long wait for another successful hunt. 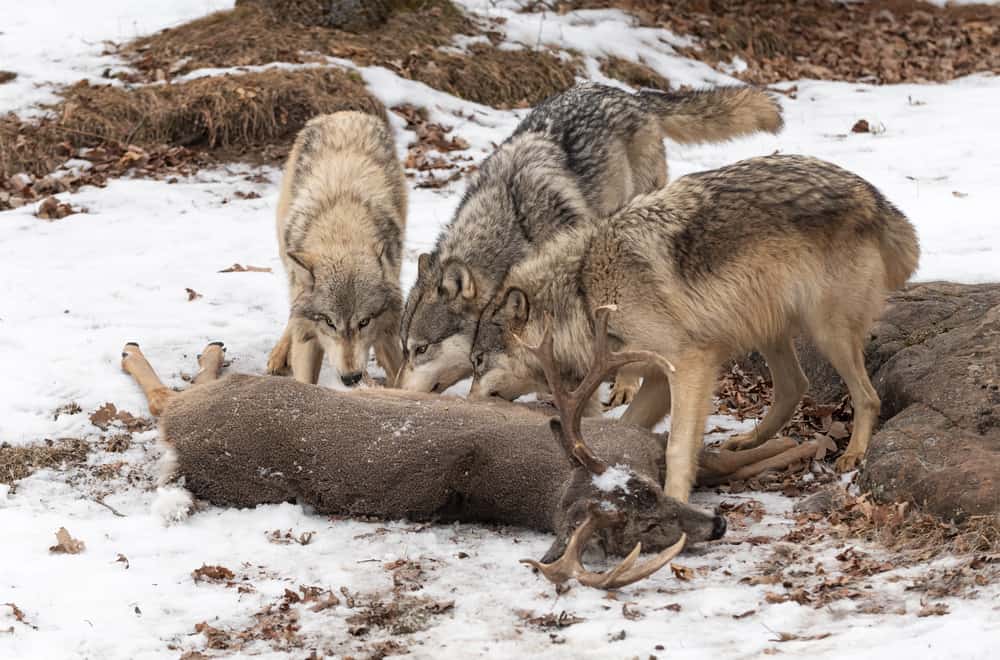 Despite the popular image of a silhouetted wolf howling at the sky, wolves don’t actually howl at the moon. Or at least, they howl no more during a full moon than at any other time!

Wolves will howl whatever the time of day or night. As crepuscular animals, they are more active at dawn and dusk, so you can expect more howling then.

A wolf howling alone may be looking for a mate or seeking to locate the rest of the pack. Three or more wolves howling together may be summoning the pack together or warning off another pack.

Each wolf howls differently, and the howl can be recognised by different wolves. The howl of another member of the same pack will elicit a very different response from that of a rival pack member.

2. Wolves can live anywhere from forests to tundra

Wolves are remarkably adaptable animals who can live in a wide variety of habitats. Areas rich in prey like bison, with good sources of water and shelter, are perfect for wolves. And they can cope with anything from mountainous terrain to desert.

They were once common throughout North America, but over time have been driven into the remote wilderness. Today, Minnesota, Alaska, Michigan, Wyoming, Lake Superior and the Northern Rocky Mountains are all home to varying populations of wolves.

3. Usually only alpha wolves have pups

There is a limit to how many pups a wolf pack can sustain. For that reason, it’s usually only the alpha male and female wolves who will breed. They will prevent lower ranking wolves from doing so, chasing them away from mates.

Sometimes, however, love conquers all! An alpha wolf of either sex may prefer a lower ranking wolf as a mate. And sometimes alphas fail to prevent other wolves from breeding, so the pack may have two or more litters to support.

While wolves are sometimes monogamous, that’s not always the case. An alpha may mate with a number of different wolves, especially in larger packs.

When pups are born, their eyes and ears are closed and don’t open until they’re about two weeks old. Their bodies are covered in fluffy black hair, and they squeak, mew and yip, attempting to nurse from anything around them!

The mother will make a den and retire there to give birth, usually at the end of April to early May. At first, she will stay with her pups at all times, while the other wolves bring her food. The pups will venture from the den at about five weeks old.

5. The pack hierarchy can be flexible

We’ve already talked about the social order in wolf packs. But it isn’t always as simple as a linear progression from highest to lowest status wolf.

Sometimes, the progression is circular. So one wolf will be dominant towards another, who in turn will dominate a third. But that third wolf is then dominant towards the first. In that scenario all wolves are both dominant and submissive to another animal.

And sometimes a wolf’s status changes. An omega wolf – usually the scapegoat of the pack – can sometimes attain higher status over time. And with puppies, their relative status can change from one week to the next.

Another fascinating element of wolves’ social hierarchy is the way it applies to the sexes. Both males and females have their own separate and independent social orders. A low ranking male may outrank a high ranking female – or vice versa.

Each pack will have both an alpha male and an alpha female. But either of them may be the pack leader. And both male and female wolves may feed and look after the young when the nursing stage is over.

7. They’re built for the chase

Wolves are designed to be effective predators. They have 42 teeth and can bite down with an incredible 1,500 pounds of pressure per square inch. Their powerful jaw muscles are twice as strong as those of a German shepherd dog.

They’re fast too. They can attain speeds as high as 45 miles per hour. But they can only sustain those speeds over shorter distances.

Wolves are truly amazing animals, and we hope you’ve enjoyed learning more about them. Once past the nursing stage, their diet is strictly meat-only. Elk, bison, moose and other ungulates make the perfect dinner. But they’ll usually only be caught if they’re young, old or ill.

And next time you watch a movie where a wolf lets out a bloodcurdling howl, remember – they’re probably just calling their pals!