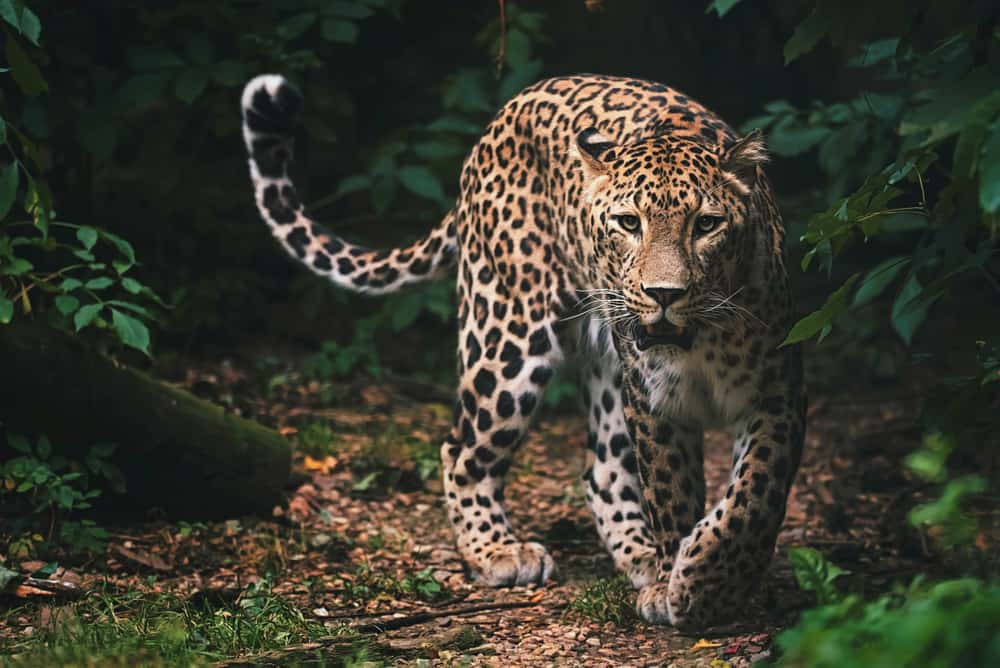 Leopards are some of the most uncommon exotic animals in the world. They belong to the family of large cats and are instantly recognizable due to their distinct yellow fur and black spots arranged in rosettes. Leopards are also fierce hunters that eat a variety of different animals.

Do you want to learn more about a leopard’s diet? If so, keep on reading!

In this article, we’ll thoroughly examine the characteristics and habitat of a leopard, as well as what leopards eat daily. We’ll also briefly discuss the hunting techniques and predators of the leopard.

The main trait of leopards is that they are solitary animals. This means they shy away from humans and other animals and prefer to live alone. Leopards are also highly territorial, marking their territory with claw marks on trees or urine.

Where Can You Find Leopards?

Leopards are very adaptive animals, which means they can survive in many different conditions and habitats. They favor rainforests and savannas but also live in grasslands, woodlands, and even riverine forests that have not been disturbed by humans.

Leopards have the widest distribution among all wild cats. They most commonly appear in sub-Saharan Africa, Asia, and the Caucasus, but you can also find them in Egypt and the Arabian Peninsula. This map contains detailed information about where you can see leopards.

How Often Do Leopards Eat?

Instead, they usually hunt for a day and then rest and digest it for the next few days. Depending on the size of their prey, leopards can go up to 18 days without hunting. But, if their last catch was small, they hunt more regularly. There have also been instances of a leopard hoarding prey.

What Do Leopards Do During the Day?

Leopards primarily hunt from dusk till dawn and rest during the day and some night hours. You’ll usually find them in thickets or among rocks. Since leopards are excellent climbers, you may find them sitting on top of tree branches.

What Do Leopards Eat?

Leopards are carnivores which means that they require specific nutrients that are only found in animal meat. The leopard’s preferred food source is medium-sized animals like impalas, deer, gazelles, antelopes, warthogs, wild boars, and some types of monkeys.

Despite their preference for medium-sized animals, leopards are highly adaptable to their surroundings and hunt animals of all sizes. In fact, leopards of sub-Saharan Africa are known to consume more than 90 different animal species. Here are some of the animals that leopards usually hunt and eat:

If a leopard can’t find enough medium-sized animals to hunt, it will turn to smaller animals to survive. These small animals range from primates like gray langurs, rabbits, mice, and other rodents. They can even feast on reptiles like lizards and snakes, although that’s very rare.

In general, leopards don’t enjoy swimming. After all, they’re just big cats! But, leopards that live in riverine forests or islands have become more accustomed to hunting in the water for their prey due to the abundance of fish.

Also, leopards have been spotted hunting amphibians, including large crocodiles. Their flexibility allows them to easily kill and eat crocodiles despite being similar to or larger than them.

Leopards are generally very strong and agile, which makes them excellent climbers. They can easily climb tall trees, which is why they can often be found resting on top of large branches. This trait also allows them to hunt for birds. They can climb trees or mountain slopes to catch birds or eat chicks and eggs from a bird’s nest.

Leopards have the potential to cause significant damage to farms that are close to their habitat, as they enjoy hunting domesticated animals like sheep, goats, pigs, geese, and poultry. This practice can turn humans against them, though.

A big problem that leopards in sub-Saharan Africa face is being hunted by humans due to conflicts regarding livestock.

If there are no other adequate food resources, leopards have no problem feeding off other animal carcasses. They will often steal carrion from other hunters like jackals, African wild dogs, and hyenas, but they will generally avoid larger animals such as lions.

If food resources are scarce, leopards will turn to insects to survive. Leopards will eat all types of insects, including dung beetles, caterpillars, moths, flies, and maggots.

What Do Leopard Cubs Eat?

Leopard cubs are born blind, deaf, and toothless, so they depend on their mother for food. During the first few months of their development, they drink their mother’s milk, which contains all the necessary nutrients for their growth.

After the first two months, the mother will start introducing them to solid meat, and by the third month, they should be fully weaned. Once they are weaned, the cubs will begin following their mother to learn how to hunt properly.

How Do Leopards Hunt?

Leopards generally prefer to hunt during dusk. They usually hunt prey on the ground, but they can also climb up trees to catch other animals or ambush their prey by jumping down. The animal has senses like vision and hearing, relying on them to spot its prey from afar.

Once a leopard has located its prey, it will stalk it for a while before finding an opportunity to pounce. It approaches slowly within a few meters of its hunt and bounds on it, killing it through suffocation.

Since leopards are at the top of the food chain, they don’t have any natural predators. But, they are always wary of other animals like lions, wild dogs, and hyenas because they can often attack, kill and eat a leopard due to competition for food.

Besides that, leopards don’t get into conflicts often and aren’t afraid of most animals due to their large size. Leopard cubs, on the other hand, are much more vulnerable, especially during the first year of their lives.

In fact, leopards are known to kill their own offspring sometimes due to lack of prey. In some specific areas, leopards are also threatened by bears, tigers, and humans.

A cheetah is another animal that belongs to the family of big cats. It shares many similarities with the leopard, to the point where people sometimes mistake one for the other and have a hard time distinguishing between the two. There are several differences between leopards and cheetahs. Some of the most important ones are:

Starting from the head, cheetahs have a smaller and rounded head compared to leopards which have a more elongated face shape. Cheetahs also have smaller jaws and teeth and larger nostrils to allow for easier breathing while running.

One of the most prominent telltale signs that differentiate cheetahs from leopards is the black line that looks like tears on the cheetah’s face. This is useful as it reflects the sun during the day, which is the primary hunting time for cheetahs.

The whole body structure of both animals is built to aid them in their preferred hunting style. Cheetahs have a longer and more slender body compared to the bulkier but compact body of a leopard. This allows cheetahs to reach high speeds while running.

Cheetahs also have longer back feet, which aids with acceleration, whereas leopards have bigger front feet, allowing them to climb trees more easily. A cheetah’s claws are also non-retractable, enabling it to turn quickly while running at high speeds.

Their fur has some of the most obvious visual differences. A cheetah has tan-colored fur with round or oval black spots. A leopard’s pelt is usually yellow, but different leopard subspecies like the black panther or the snow leopard can have other colored furs for better camouflage. Its black spots are also shaped like rosettes.

That’s why cheetahs usually hunt in open spaces, which allows them to reach their tremendous top speeds of up to 70 mph. On the other hand, leopards prefer hunting grounds with more dense cover to allow them to camouflage and stalk their prey.

Leopards are truly fascinating animals. They are some of the strongest and most adaptable animals in the world, which allows them to survive in many different conditions and habitats. Their varied diet also helps with their survival, as they’ll always be able to find something to eat.