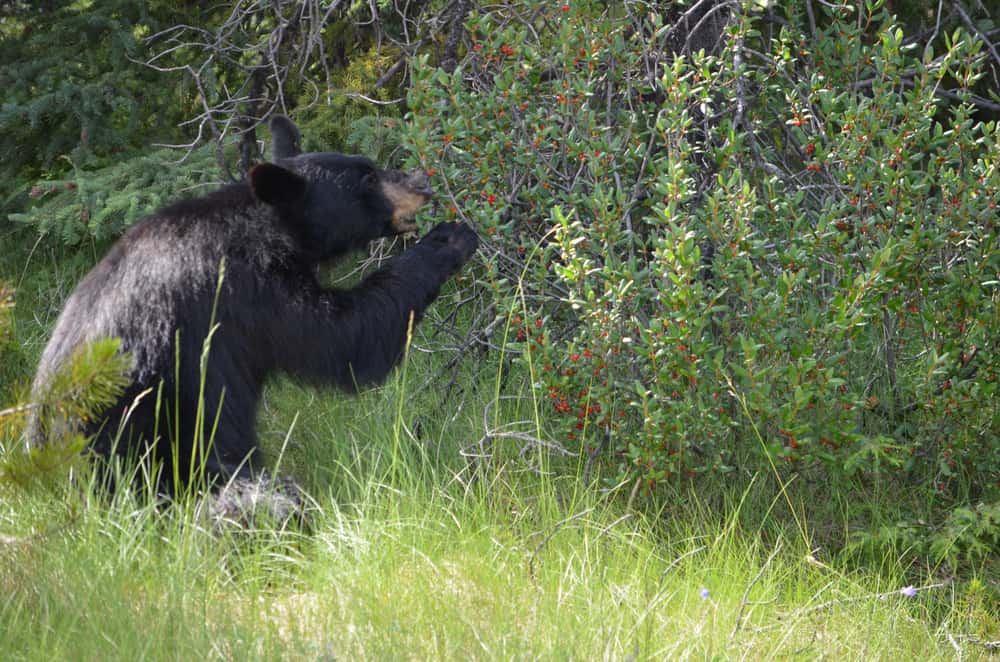 Believe it or not, not all black bears have a black coat. The North American Black bear is really black, but these animals can also have white, blonde, cinnamon, blue-grey, or dark brown fur. It is the smallest species in North America compared to Polar and Grizzly bears.

It is the most wide-ranging bear in the US and lives in 40 of the 50 states, primarily in forests. Nowadays, human and bear habitats increasingly overlap, so this animal often eats garbage instead of the regular food typical of its species. Now, let’s see what do North American Black bears eat in the wild.

This animal is sexually dimorphic, so males are significantly larger than females that are commonly 200 to 300 pounds (90.7 – 136 kg) heavy.

Surprisingly, Black bears are not always black but come in more colors than any other mammal living in the US. Bears living in the eastern part of North America have deep black fur, but at least 25% of these animals have a white chest blaze.

Bears living in western states have coats in various colors, including:

In British Columbia live a rare Kermode bear with all-white fur. Interestingly, cubs of the same mom bear can have different coat colors, and some of them change fur shade during the year. Scientists believe that the primary reason is a quick adaptation to the habitat.

What Do North American Black Bears Eat in the Wild?

It is hard to find what North American Black bears don’t like to eat. Even though these animals are officially classified as carnivores, they are actually omnivores that ingest anything available, including human leftovers.

In fact, about 80% of their average diet consists of plants and berries. Approximately 15% of their food is insects, and only 5% is meat.

Remember that North American Black bears spend at least half of the year hibernating, so they need to build their fat reserves during spring and summer to survive cold winter.

As a result, they spend months in the waking state looking for food, eating, and sleeping. Their diet is diverse, consistently high in fat, protein, and sugar, and includes:

Bears don’t have a specialized stomach for breaking down plants efficiently. However, their digestive tract is long, which allows pulling extra nutrients from soft plant matter, like:

This animal will always choose to ingest plants right after hibernation since its stomach starts working correctly only after a few weeks of waking up.

Even though most people believe that bears enjoy eating honey, they actually prefer insects. So, they will rather look for the larvae than honey in the hives. On the other hand, these giants enjoy ripe berries, and it is estimated that an adult can eat over 30,000 a year.

A male North American Black bear can kill and eat large hoofed mammals like caribou, elk, and moose, but it often chooses not to. Such an animal can injure the bear, and it is not prepared to risk something like that before the hibernation period.

However, the bear won’t hesitate to attack weakened, old, or injured hoofed animals. Finally, male Black bears can be cannibals and consume adult females and young Black bears when there is insufficient food.

These tree climbers are North America’s most typical bears that live in forests, swamps, and mountains. Their cubs are small when born and weigh only 8 ounces (227 g). It is unbelievably tiny compared to an average female bear weighing about 90 to 350 pounds (41 – 160 kg).

Black bears are deeply connected with their habitat. It is known that captured animals can return to their environment after release, even though it is 125 miles (200 km) away.

After activity at dawn and dusk, a typical Black bear will choose a den for taking a nap, such as:

They hibernate during winters but enjoy exploring habitat alone from spring to autumn. Keep in mind that these animals don’t have a territory but a home.

An average bear’s home range is up to 300 square miles (777 km2) for males and about 50 square miles (130 km2) for females. It needs to be large enough to provide food and shelter. A bear will travel farthest in early spring when it is still hard to find food.

The rule of thumb is that bears can share that space with others regardless of gender, just not at the same time. The only exception is a couple during the breeding season in summer that shares the same den.

After 220 days, females give birth to one to three cubs in winter. In rare cases, one mom can give birth and raise four baby bears. Bear moms raise cubs for approximately a year and a half and protect them from predators, such as:

In that period, they will teach offspring everything they need to know to survive, help them find food and water, and provide shelter.

Once the female bear is ready to breed again, its daughters can stay to live nearby, but young male bears need to find their own living area. These animals often look for food sources near people’s habitats and grab available leftovers, birdseed, and pet food.

Bears are excellent moms, so you should be careful when noticing lonely cubs. It is improbable they are abandoned, and their mom is probably nearby. Never try to pick up cubs, touch or feed them. In most cases, they don’t need your assistance. 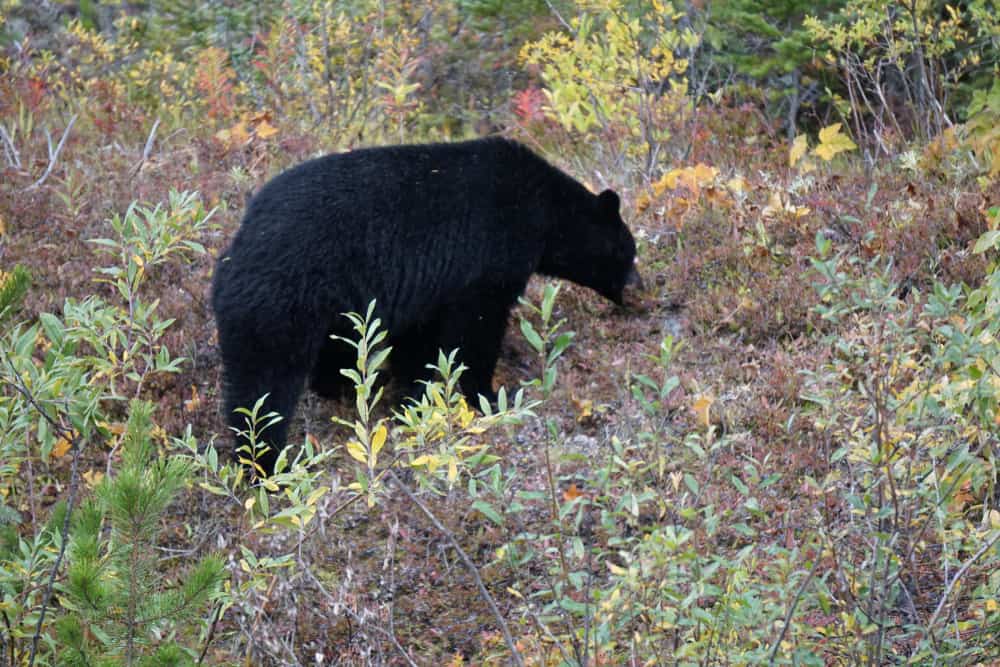 Bears come out of their dens in spring. They are thin, weak, and very hungry after hibernation. It is a challenging period for these giants since plants won’t leaf for at least a month. Therefore, they need to survive by eating grass, particularly dandelions at lower elevations. They can also eat:

After surviving spring with minimal food, Black bears will enjoy summer and all the goodies it brings. In June, new greenery sprouts, and they can find necessary high-energy food in:

Besides plants, these animals will look for:

This period is critical for Black bears. They begin a Polyphagia state and consume enormous food amounts to put on weight as much as possible. That is the only way to survive the coming winter and long winter sleep. They are not picky and will eat everything available, including:

Black bears return to their dens in November and December to hibernate with minimal eating and drinking. However, ​those living in lower latitudes may escape this stage. Plus, animals capable of feeding in urban areas won’t hibernate at all since they can find food throughout the cold period.

North American Black bear diet will depend on the season and food available. These animals are omnivores and enjoy nibbling anything, including plants, insects, meat, carrion, and even human leftovers. Male bears are sometimes cannibals when there is not enough food in their habitat.