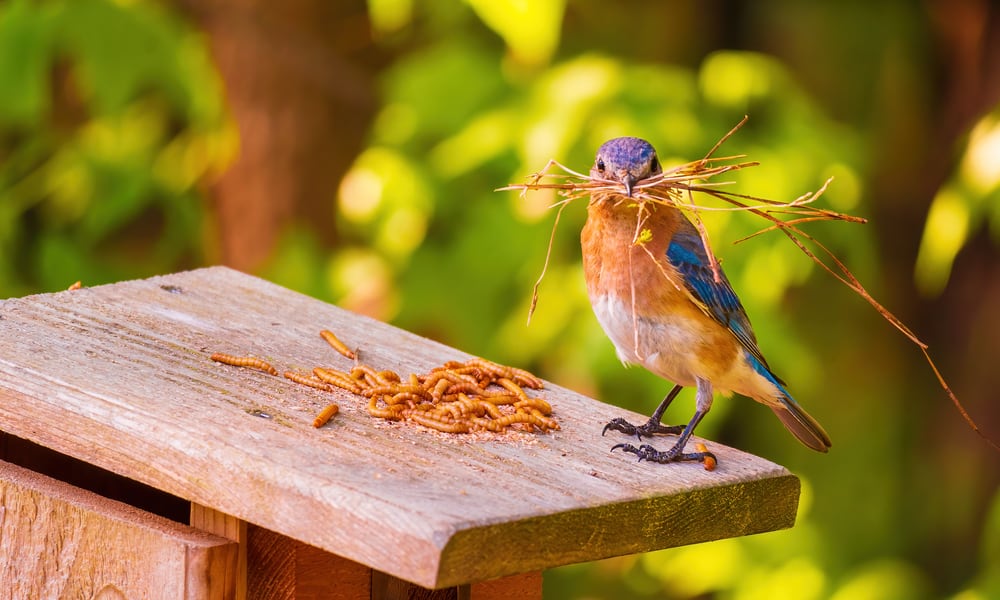 Bluebirds are one of our most distinctive and well-loved birds. But if you want to encourage these beautiful creatures to your garden, you need to know the answers to some important questions. Questions like, “What do bluebirds eat?” and “Where do they make their nests?”

That’s where we can help! We’re going to explore everything you need to know about the diet and habits of bluebirds. And we’ll share some fun facts along the way.

So if you’re ready, step this way to find out more! 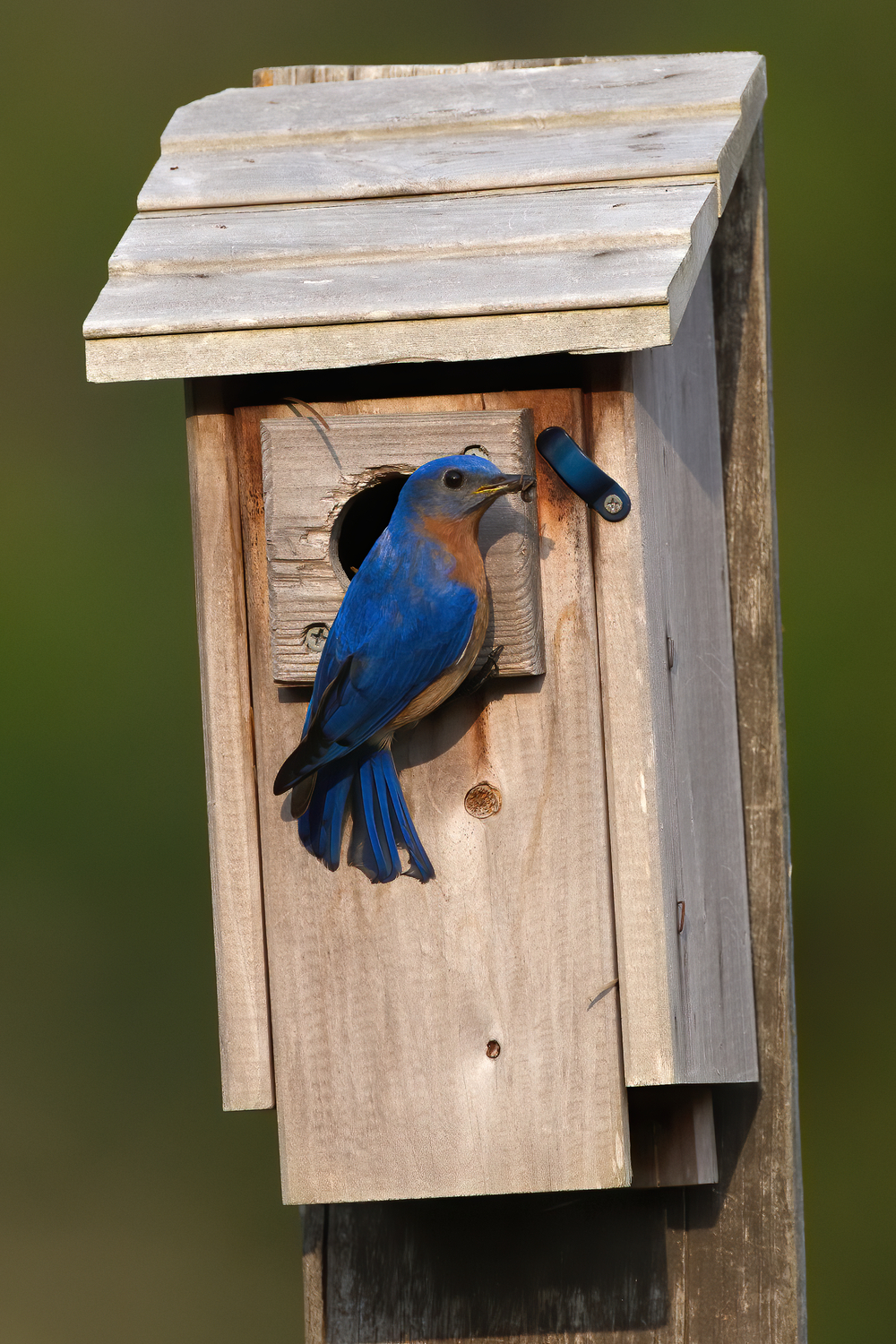 The bluebird has distinctive plumage that makes it easy to spot. Males have bright blue wings, heads and backs, while females have more gray on their heads and tails. Both sexes have brownish orange breasts.

You can find three different species of bluebirds in the United States – the eastern, western and mountain bluebirds.

Eastern bluebirds live to the east of the Rockies, with populations found all over the eastern states. Some sub-species also live far south as Guatemala, El Salvador, Honduras and Nicaragua.

All three species love open habitats – fields, prairies and sparse pine forests. Here, they can find plenty of insects to feed upon. You can find out more about bluebirds’ preferred habitat in this YouTube video from Andy Wood of Trails.

They’re sociable birds, and you’ll sometimes see flocks of as many as a hundred bluebirds together. But that changes when it’s breeding season, usually in the spring and summer. Then, bluebirds become intensely territorial, as they seek to secure a mate and raise their young.

Bluebirds will usually raise two broods of young in a year, although they may raise more if food is plentiful.

It’s the female bluebird who builds the nest, and this will take her about ten days. The structure is small and shaped like a cup, lined with feathers, grass and other soft materials. Bluebirds often nest in the hollows of trees, and they’ll be attracted to any available bird box.

Baby bluebirds have a tough challenge to survive. Most die within the first year of their life, with the young birds making easy prey for a wide range of predators. These include raccoons, chipmunks, black bears, flying squirrels and even fire ants.

Once past the first year of their life, the bluebirds’ odds of survival improve significantly. They can live for between six and ten years. And the oldest recorded bluebird lived for an impressive ten years and five months.

What Do Bluebirds Eat in the Wild?

Bluebirds love open habitats where there are plenty of insects for them to eat. Extra help from humans with bird feeders can make a big difference to the birds’ survival in cold weather. This YouTube video shows a feeder specially designed for bluebirds, which doesn’t allow bigger birds to take their food.

About two thirds of a bluebird’s diet consists of insects. Fruits and berries make up the remainder.

Bluebirds hunt insects by sitting on low perches, high enough above the ground to spot their prey. A shrub, fence post or power line makes an ideal lookout point. They’ll then swoop down and scoop up any unlucky insect that comes too close.

Here’s some more detail on the kinds of foods bluebirds like to eat.

Make sure you use live mealworms though. Freeze-dried mealworms don’t contain enough moisture to keep the nestlings hydrated. 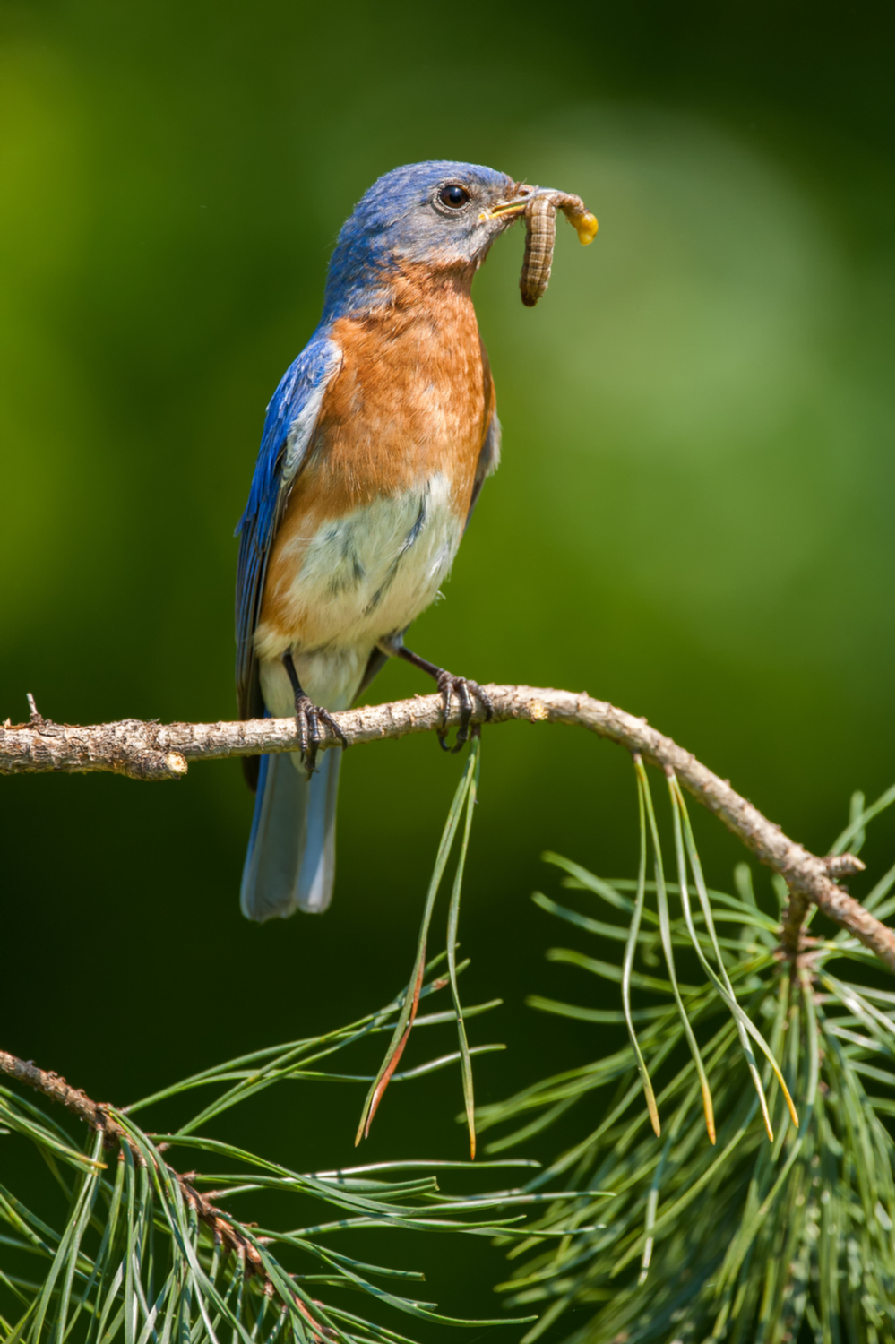 1. Mother birds are essential to the survival of young bluebirds

Only female bluebirds have a patch of bare skin on their abdomen, known as a brood patch. This is necessary to allow the heat from the mother’s body to incubate her eggs. It’s just as important for the first week of the nestlings’ lives, when they’ll need her warmth to survive.

During this time, the father will bring back food to the nest for the mother and young.

If the mother is killed at this stage, the nestlings won’t survive unless they are cared for by a skilled professional. But once the baby birds are a week old, they’ll have enough feathers to keep warm themselves. As long as there’s enough food around, the father will be able to feed and rear them.

2. Sometimes extended family will help to raise the young

Bluebird pairs are usually monogamous. They will stay together throughout the breeding season, and often beyond it.

That faithful nature can be beneficial to their young. In cases where the mother bluebird has died, it’s been known for the extended family to step in.

Previous broods may help the father to feed and care for the nestlings. As long as the babies have enough feathers to maintain their own body temperature, they have a fair chance of surviving.

3. Bluebird eggs are blue too

Just like the birds themselves, the eggs of bluebirds are a pretty powder blue. There are usually four to six eggs in each clutch.

It will take about 15 days after hatching for the baby bluebirds to be ready to leave the nest. A year later, they will be ready to raise their own families.

4. Reflective surfaces can be dangerous to bluebirds

During the breeding season, male bluebirds will aggressively defend their territory from rival birds. That can extend to attacking their own reflections.

This isn’t usually the cause of serious physical harm, but it increases the bluebirds’ stress levels. If you have bluebirds in your garden, try to eliminate sources of reflection. Covering glass in the spring and summer will be a big help to the birds’ mental health.

5. Bluebirds are amongst the most popular of American birds 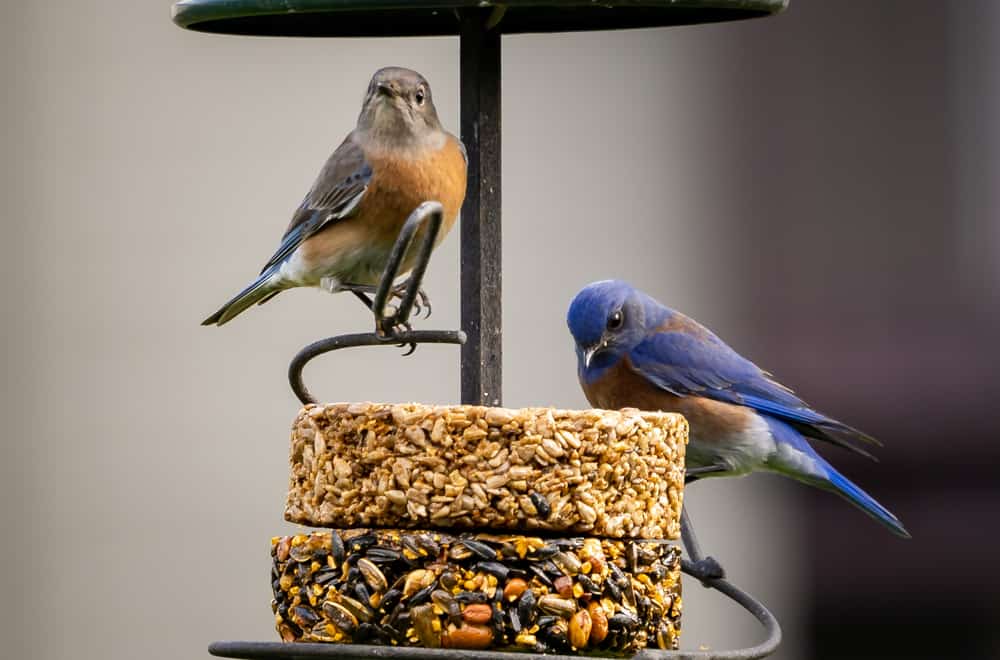 Bluebirds enjoy immense popularity in the United States, with a bluebird society in almost every state. It’s also the state bird of Missouri, where it’s considered a symbol of happiness. And it was given the same accolade by New York in 1970.

6. They have excellent eyesight

Bluebirds use their sharp eyesight to hunt down insects. They can see a beetle or cricket on the ground at a distance of around 40 to 50 feet away.

This is quite different from other small birds. These prowl the ground diligently, looking for worms and insects at close quarters. In fact, in this respect, bluebirds have more in common with birds of prey like hawks and falcons.

7. Some bluebirds migrate and some don’t

Whether or not bluebirds migrate depends on the conditions in their home territory. Birds living in northern states, where it’s colder, will usually fly south for the winter. But even they will stay put if there is enough food around.

In spring, migratory bluebirds are one of the first species to return home. They’re a wonderful sign that the warmer weather is on the way.

8. Their song is soft and musical

Although they are better known for their plumage, bluebirds have a soft, musical warble that’s very pleasant. You can listen to it in this YouTube video from the American Bird Conservancy.

Both male and female bluebirds sing, though females do so for a wider range of reasons. For male bluebirds, singing is primarily a way to attract a mate and see off other males. Females sing for these reasons too, but also to communicate with their nestlings and their mate, and to deter predators.

We hope you’ve enjoyed our answer to the question of “What do bluebirds like to eat?” Whenever insects are available, they’re the bluebird’s top choice. But if they’re not, they will also eat berries, fruits and even scrambled egg!

Bluebirds will be grateful for a helping hand during the winter months. If you’re able to stock up a bird feeder, you’ll do a lot to improve their chances of survival. And in return, you can enjoy the sight and song of these beautiful creatures.