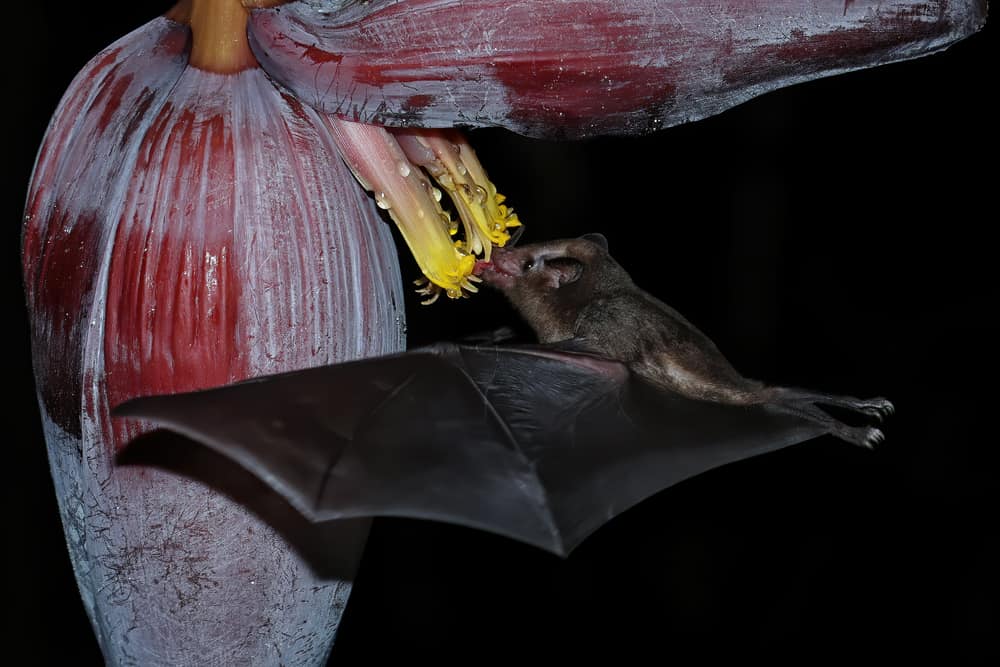 Bats have played a part in our popular culture since Dracula first sank a pair of fangs into a neck! But if you want to find out more about bats in real life, you need to get close to them.

To do that, you need to find the way to a bat’s heart – and it’s through his (or her) stomach! So what do bats eat? And what else do you need to know about these amazing creatures?

Read on to find out! 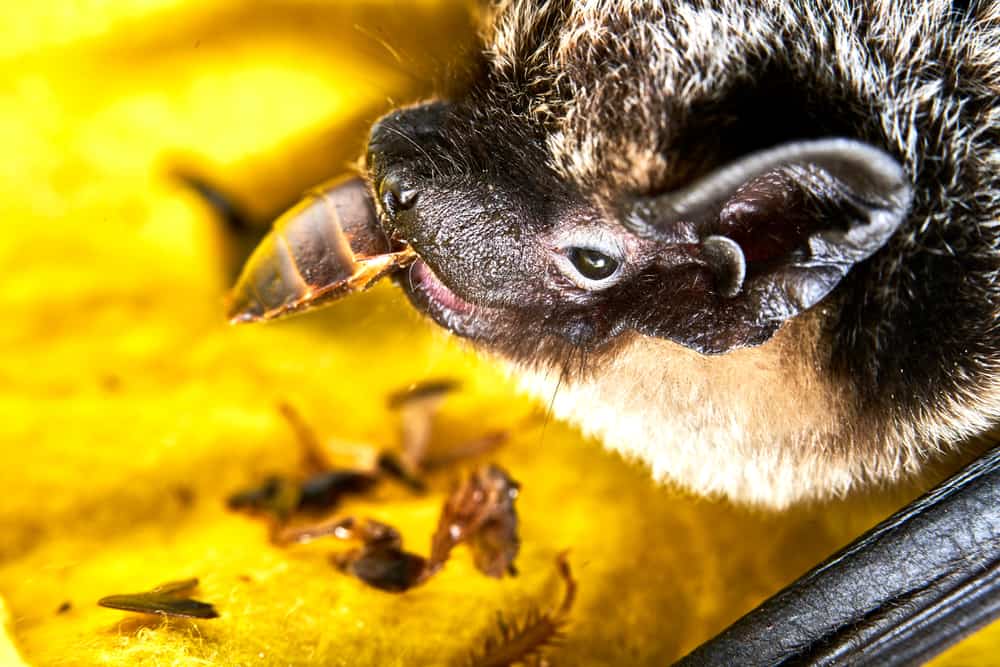 Bats are an amazingly successful mammal, with over 1,400 species across the globe. In the USA alone, there are an estimated 48 different bat species. In fact, one out of every five species of mammals on the planet is a bat!

All those species mean that bats are also incredibly diverse – in size, habitat and in what they eat. But what they have in common is how different they are from other mammals.

Bats are the only mammals that are able to fly. By that we mean, powered flight, rather than jumping and gliding, as flying squirrels do.

The Latin name for the order of bats is chiropteran, which means “hand wing”.  This YouTube video from the Smithsonian Tropical Research Institute shows how bats have essentially turned their hands into wings!

Bats are divided into two main orders, microbats and megabats.

Microbats use echolocation to navigate. They emit high frequency sounds and use the echoes to move around their environment, including to find prey. Megabats, on the other hand, have excellent eyesight and are mainly active in the daytime, or at dawn and dusk.

The combination of being able to fly and move around in the dark makes bats truly formidable. They’re able to hunt at night, hoovering up all the prey that birds, with their diurnal habits, can’t reach.

They’re also very long lived compared to other creatures of a similar size. The record for the longest-lived bat is an amazing 41 years. That’s partly a result of their incredible immune systems, which are exceptionally good at tolerating viruses.

Scientists think this is connected to bats’ ability to fly. Flying requires a great deal of energy, which means that bats produce a lot of waste. They’ve evolved to be very effective at getting rid of that waste.

A helpful side effect is that they’re also great at getting rid of pathogens without getting ill. Even more amazingly, the same genetic variation also seems to explain why bats don’t get age-related inflammation. In other words, they stay healthier through longer lives.

If only we humans could fly too!

What Do Bats Eat in the Wild? 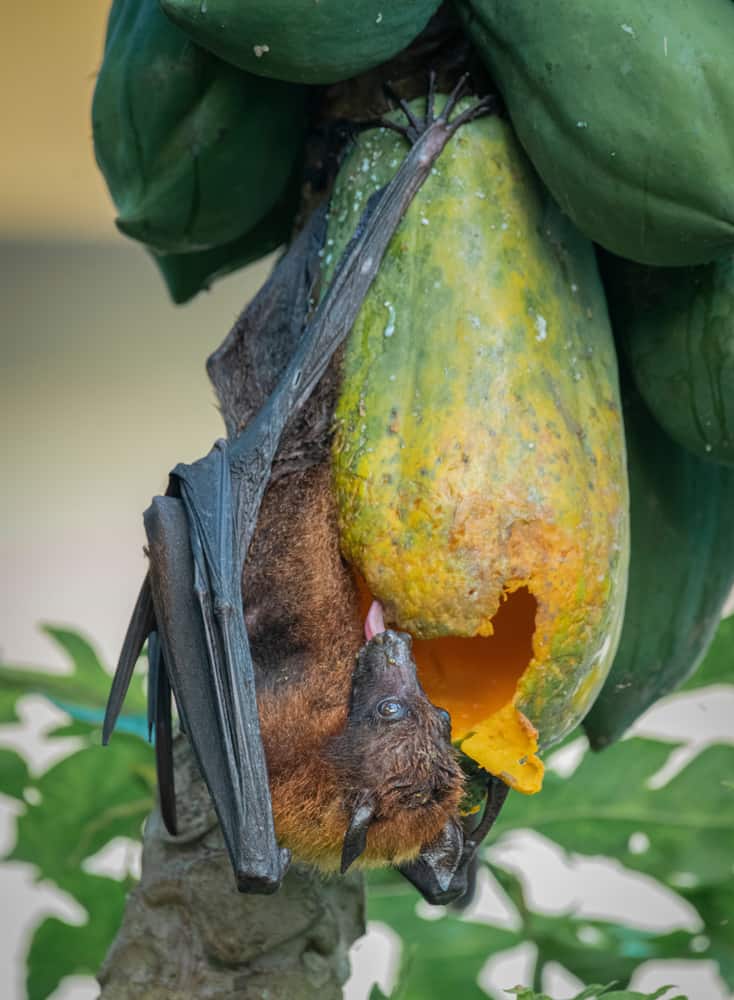 We’ve already seen that being able to fly and move around at night makes bats brilliant hunters. But different kinds of bats have different diets.

Most megabats don’t actually hunt, instead living on fruit, nectar and pollen. Microbats, on the other hand, eat insects and even other vertebrates. As this YouTube video from TED-Ed shows, about 70 percent of bats are insectivores.

As we’ve already seen, flying takes a lot of energy. As a result, bats have to eat a lot too.

A bat that lives on insects may have to eat 120 percent of its body weight every day. A common Pipistrelle, for example, will eat up to 3,000 small insects a day to survive! That makes bats a very important natural control on insect numbers.

For fruit eaters, the food requirement is even higher. They may need to eat over twice their body weight daily.

So let’s take a look at the different foods bats can eat:

Insects that provide a tasty treat for bats include moths, beetles, mosquitoes, gnats, flies and wasps.

You might see an Egyptian fruit bat carrying a whole fig. And their Jamaican cousins have been recorded carrying fruits weighing up to 1.75 ounces. When you consider that the Jamaican fruit bat itself only weighs between 1.4 and 2.1 ounces, that’s pretty impressive. 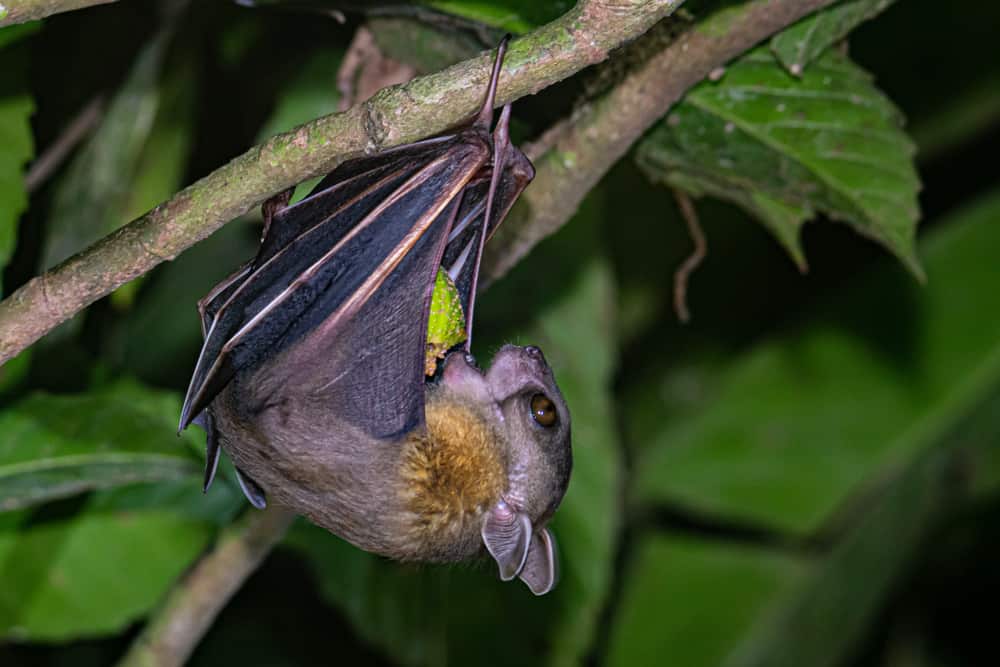 1. Vampire bats have a bad reputation – but they’re good news for humans

It’s true that vampire bats suck blood – but that’s not all bad news! When they do it, they secrete a chemical called desmoteplase. This stops the blood from clotting before the bat has taken its fill. It’s now being tested as a treatment for victims of strokes.

Because bats have to eat such a lot, they are a vital control on insect life. A single brown bat can eat around 1,000 insects an hour. The value of bats to farming in the USA has been estimated at about $3.7 billion per year. Their droppings, known as guano, also make excellent fertilizer.

Bats that eat nectar are important pollinators. The cave nectar bat, for example, is the only creature that pollinates the durian fruit of south-east Asia.

Other bats pollinate tropical fruits including bananas, peaches, nectarines and agaves. Agaves are the fruit used to make tequila – so without bats, there’d be no margaritas!

Bats can fly at great speeds. In 2016, researchers at the University of Tennessee used airplane tracking technology to monitor the flights of seven bats. They found that one species, the Mexican free-tailed bat, flew at speeds of up to 100 miles per hour. That would make it the fastest mammal on earth.

The largest known bat is the flying fox. This magnificent creature has a wingspan measuring an astonishing 5 feet 7 inches from tip to tip. The largest can measure 1.5 feet from their head to the end of their body. And they can weigh up to 3 pounds 12 ounces.

Take a look at them on this YouTube video from National Geographic.

At the other end of the bat scale is the tiny bumblebee bat – or Kitti’s hog-nosed bat, to give it its proper name. Found in Thailand and Myanmar, it’s smaller than a human thumb. And it weighs just 2 grams. That’s about the same as two Skittles.

7. They can live in huge colonies

Remember all those scenes in the Batman films, with thousands of bats roosting in caves? Well, it turns out that’s pretty much how many bats live.

The Bracken Bat Cave in Texas is home to the largest known bat colony. Several million Mexican free-tailed bats live there through the spring and summer months.

Bats will move to different homes – known as roosts – at different times of the year. In summer, female bats gather in maternity roosts to have their babies. In winter, bats move to hibernation roosts, where they shelter from the bad weather.

8. Some bats can swim

Although it’s not part of their normal behavior, some bats can swim when absolutely necessary. Island-dwelling species often have to fly over water. And if a bat has dropped its precious cargo of fruit, it may be forced to take a quick dip to retrieve it.

The evidence here is limited. But there are photographs showing flying foxes using their wings and feet to swim to dry land.

We hope you’ve enjoyed our look at the fascinating and diverse world of bats! And now you know that the answer to “What do bats eat?” isn’t just “Blood!”

Bats play an essential role in our ecosystem, eating tons of insects and pollinating vital plants. These wonderful creatures are great friends to humankind. They deserve our protection and respect.