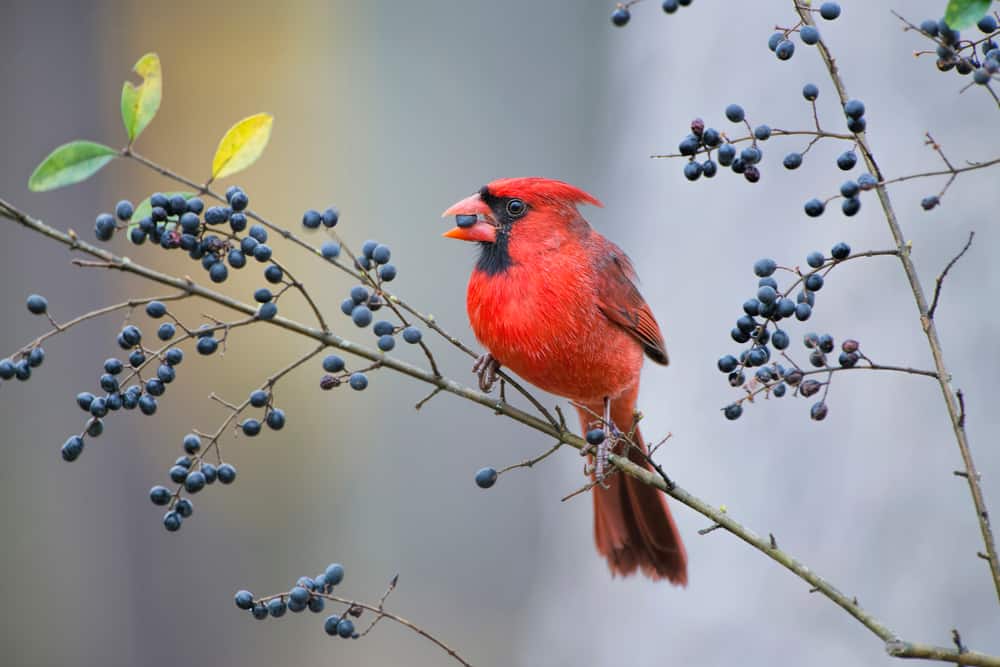 With their brilliant red plumage, cardinals are one of the most striking birds to visit North American gardens. To attract them to your yard, you need to make it an enticing environment – and that requires plenty of food! So what do cardinals eat?

That’s what we’re going to find out! And we’ll also share some fascinating facts about these beautiful birds. 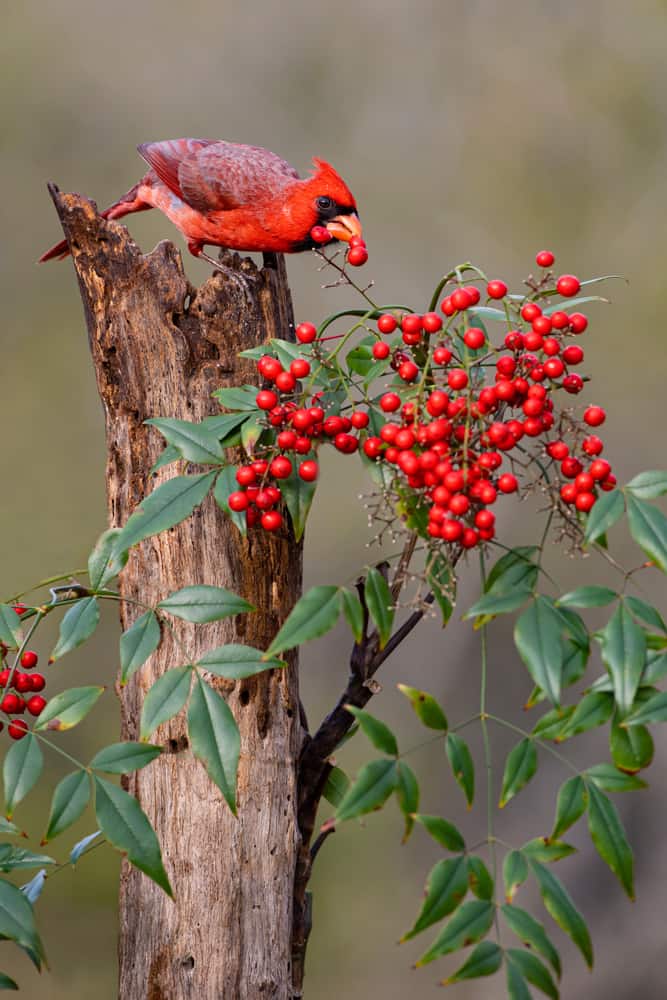 The bird we usually call the cardinal is actually the Northern cardinal, and its Latin name is Cardinalis cardinalis.

There are about 120 million of them around the world. They can be found as far north as southern Canada, and as far south as Mexico and Central America. But more than three quarters of the population live in the USA.

They don’t migrate, so if you’re lucky enough to attract them to your garden, they can visit all year round. There, they’ll brighten up your day with their bold feathers and cheerful song. You can listen to them singing in this YouTube video from the American Bird Conservancy.

Once upon a time, cardinals were sometimes kept as caged birds. This unfortunate situation was brought to an end by the Migratory Bird Treaty Act of 1918. This made it an offence to own, harm or kill a cardinal.

They were traditionally found in shrublands, wetlands and woodlands. But garden feeders have been a great friend to the species, and their numbers have gradually climbed through the 20th century.

They tend to stay in one area over winter. The female cardinal is the nest builder, and she will choose a position in dense vegetation. Nests can be situated as high as 15 feet above the ground, and evergreens make perfect sites.

Eggs are laid in the spring, and again in the summer, usually three or four at a time. Feeding the hatchlings is a fulltime job – they eat up to eight times an hour at first. That reduces to three to four times an hour after about five days.

After about six or seven weeks, the parents can breathe a massive sigh of relief. The fledgelings will now be able to fly and feed themselves.

What Do Cardinals Eat in the Wild? 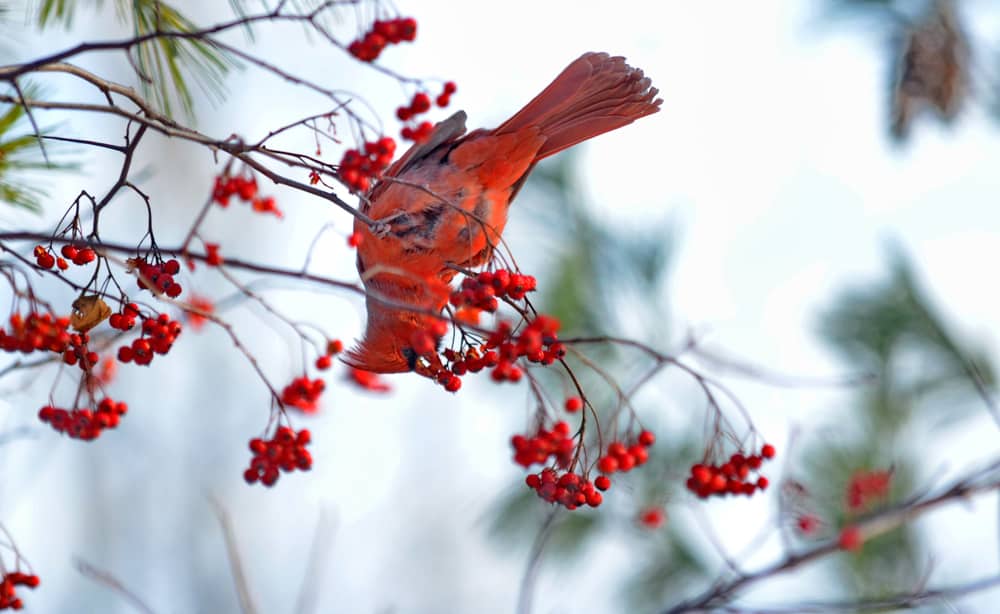 The great news if you’re trying to attract cardinals to your garden, is that they’re not fussy eaters. About 70 per cent of their diet comes from seeds, grains, greens, fruits and berries. The rest comes from insects and worms.

They forage both on the ground and in low trees and bushes. Their diet changes between the winter and summer months. You can find out more about that in this YouTube video from ExpertVillage Leaf Group.

Their food also provides much of the water they need. The rest comes from drinking from puddles and the edges of streams and other bodies of water. Their varied diet includes:

Safflower seeds are a particularly good choice for garden feeders, because most other birds who visit during winter don’t like them. That means the cardinals will be sure to have enough to eat.

They’ll also polish off a wide range of other insect life including grasshoppers, beetles, flies and flies, as well as spiders, moths and butterflies. This kind of food is rich in protein. 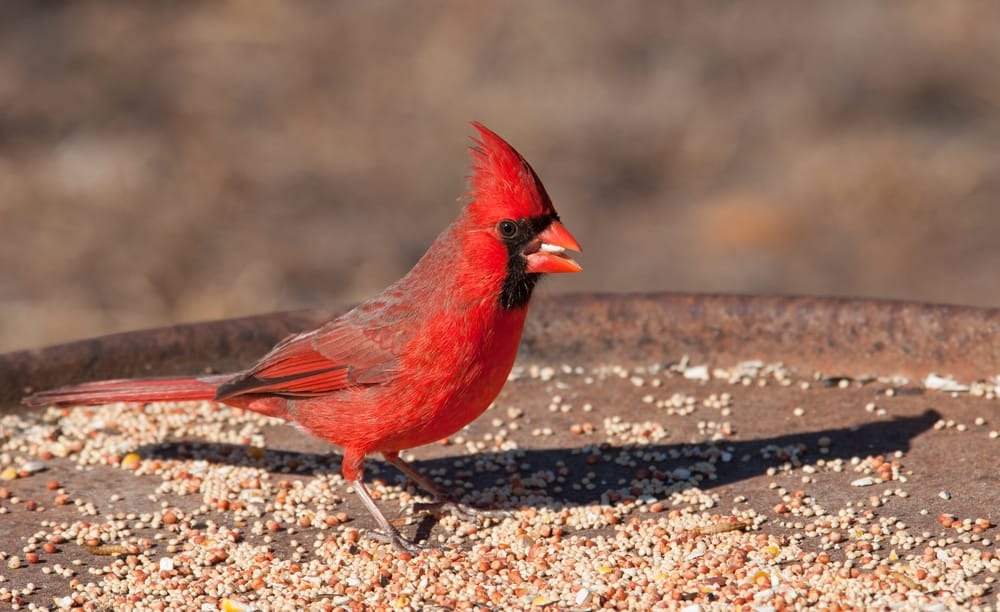 1. Cardinals can live a long time – and they’re often monogamous

Cardinals can live for between 13 and 15 years, although their average lifespan in the wild is around 3 years.

They often mate for life. Birds touch beaks during courtship ceremonies, with the male cardinal feeding the female. Sometimes, however, couples will break up – even during the nesting season. And if one bird dies, the other will quickly find another mate.

Cats, snakes, owls and other birds of prey are the main predators of cardinals. If you’re putting out a bird feeder, try to keep it away from locations where predators could lie in wait.

2. Female cardinals are the builders

It normally takes about 10 days for the female cardinal to build the nest. Her mate will help by searching out building materials like leaves, small twigs and strips of bark. You can see the nest close up in this YouTube video of baby cardinals being fed and raised.

Cardinal nests can be up to 15 feet above ground. They’re more usually, however, found between 4 and 8 feet above ground level. The birds’ bright plumage means they seek out thick vegetation to hide their presence from predators.

3. There are usually at least two broods each year

Cardinal eggs are a pretty pale gray with brown speckles. The female cardinal will usually lay three or four at a time. And the parents usually raise at least two broods a year, in spring and summer.

The hatchlings begin life with black beaks. These fade to cream and then turn orange as they get older.

As we’ve already seen, baby cardinals need intensive feeding at first. This can lead to compulsive behaviors in the parents.

In the midst of their ceaseless endeavors to feed their young, they will often feed other birds’ nestlings too. They have even been observed feeding goldfish! Any parent driven to distraction by a sleepless baby will know how they feel.

4. Male and females are different colors

Male and female cardinals look quite different. The male has the distinctive red plumage, while the female is a fawn color with red accents. Both sexes have a crest, an orange beak and a black mask.

The male’s plumage fades when he’s helping to rear his young. This makes him less visible to predators on his frequent trips to and from the nest.

You may also occasionally see a yellow cardinal. The difference in color is a result of genetic variation, and it’s known as xanthochromism.

5. They are renowned as songbirds

Cardinals are known for their singing, and have no fewer than 24 different song patterns. These can vary from place to place, almost like regional accents! And cardinals living in urban areas tend to sing more loudly than their rural cousins.

Both male and female cardinals sing, and they do so for a range of different reasons. These include to attract a mate, to mark their territory, to warn of predators, and to call their mate to bring food.

Male cardinals can sing up to an astonishing 200 songs an hour. But the songs of the female are more complex.

Adult cardinals measure between 7 and 9 inches, and they’re relatively stocky for garden birds. An adult bird weighs about 1.5 ounces – that’s about the same as nine nickel coins.

For that reason, they’ll find it much easier to use platform feeders than free hanging ones. And because they’re broad breasted, larger platforms will be easier for them to negotiate.

As with many other garden birds, cardinals will defend their territory – and that can include attacking other birds.

For that reason, it’s important to avoid reflective surfaces in your garden. A cardinal may mistake its reflection for another bird, and attack it. This isn’t usually fatal, but it can cause injuries – and at the very least, unnecessary stress.

8. Some people believe that cardinals are mystic messengers

It’s perhaps not surprising that such a distinctive bird is believed by some to have mystic symbolism. Some see cardinals as signs of good luck – if you see one, the legend goes, you’ll have good fortune within 12 days. Some hold that seeing a female cardinal is particularly lucky.

Others interpret the appearance of a cardinal as a message from a departed loved one, bringing comfort and hope.

We hope you’ve found our answer to the question of “”What do cardinals eat?” helpful. And we hope you’ve enjoyed learning more about these beautiful birds.

They’re not picky eaters, but they do need somewhere safe and secure to feed. Because they’re relatively heavy, platform feeders are a better option. And if you can provide dense vegetation for them to nest, you’re sure to have cardinals visiting your garden soon.

Have fun watching them go about their business – and enjoy listening to their distinctive song too.