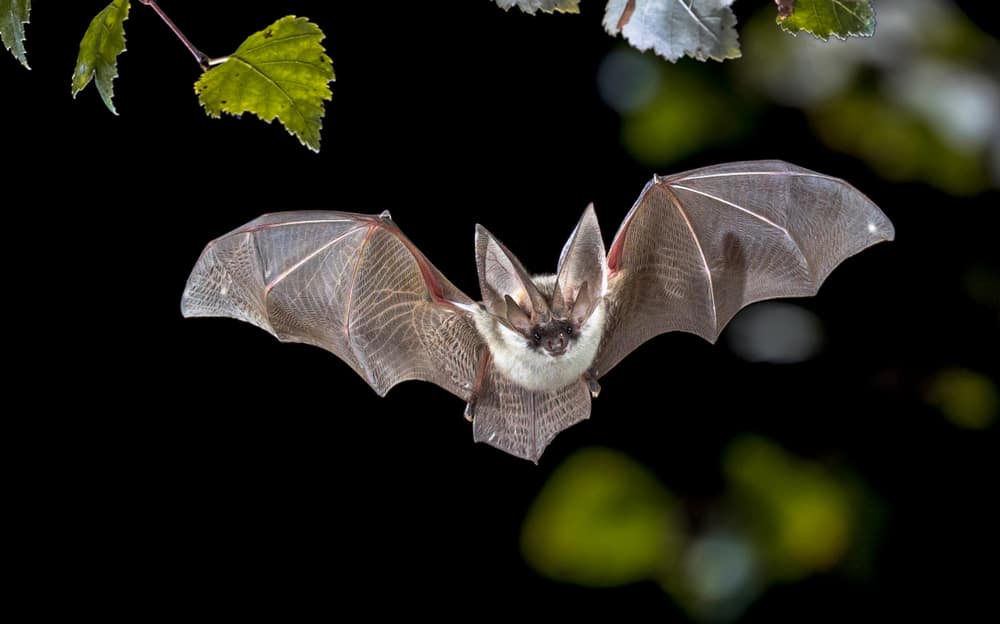 If you see a bat, you will undoubtedly think of one thing: vampire bats.

Sadly, the bat has been victim to many superstitions and omens throughout history, and its link to blood-sucking monsters is hard to ignore. But did you know that the bat has several different characteristics and meanings as a spirit animal?

Its appearance in your life doesn’t necessarily mean bad times are coming. In fact, the bat can offer protection and navigation through some challenging times for you, as well as overcoming transitions and instigating rebirth.

Today, we’re going to explore everything about bat symbolism. If a bat has appeared to you in person or in your dream, we are here to help interpret its meaning. 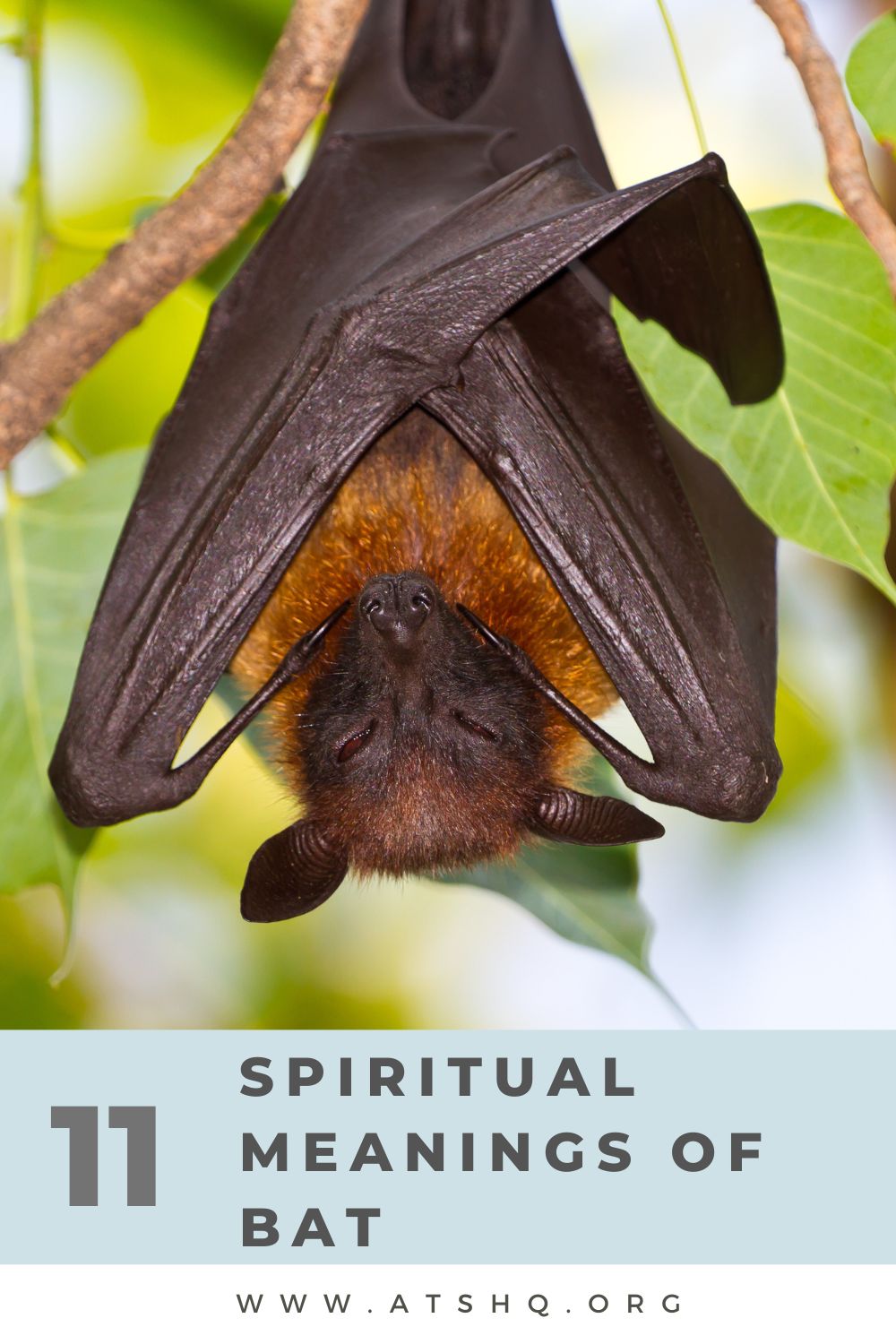 A spirit animal is your guide on life’s journey and shares positive characteristics with you. Park your reservations about the bat and leave old superstitions to one side – the bat spirit guide is an excellent symbol of rebirth and overcoming obstacles.

Because the bat is nocturnal and nest in dark caves, they are often symbols of death in many cultures. But do not worry – death has a diverse meaning and frequently signifies positive changes in your life.

The bat can symbolize the end of old ways, of an old life. It could also signify rebirth – you may be going through a significant change in your life for the better. The bat has incredible senses to navigate obstacles in its path – and you do too.

Many nocturnal animals symbolize wisdom. The nighttime can appear clouded, but these animals can move around, hunt, and survive in the dark. It is, therefore, a potent symbol of learning and curiosity.

Also worth noting, the bat is the only mammal that can fly. This fantastic feat makes it a natural symbol of adaptability and uniqueness. The bat isn’t afraid to stand out from the crowd and has forged its own way of life. From soaring through the skies to sleeping upside down, the bat is a mastery of ingenuity and resourcefulness.

A totem animal is a symbol of your identity – who you are. The bat has often been regarded negatively in culture as a sign of bad luck or deviousness. But as a totem animal, the bat is a source of great strength.

The first symbol of the bat as a totem animal is being misunderstood. Although there are over 1,300 species of bats, only 3 drink blood. And yet, they are all commonly thought of as bloodsuckers.

Like the bat, you may feel that people misunderstand you. It can also mean that you care deeply about what other people may think of you. Ultimately, you should trust in the bat – live your life your way and do not pay heed to gossip or bitterness.

If you are currently unwell or prone to sickness, the bat can help bolster your defenses, rejuvenate your body, and improve your well-being. They are a potent symbol of longevity, supporting you with good health and resilience. They have long lifespans in the wild, up to 40 years or more. This is an incredibly high number for a small creature and symbolizes its ability to survive and persevere.

Like any totem animal who lives in the dark, the bat can also symbolize your fear. We are often afraid of what we can’t see. But nocturnal animals thrive in this darkness. The presence of a bat can give you the comfort to confront and get to the root of your fears.

Finally, the bat is also a powerful totem animal related to the community. Bats are social animals and will form colonies of up to 40 adults, each of whom raises their young collectively.

As such, the bat can symbolize your relationships with other people in life, most importantly family members. The bat wants you to remember that you need companionship to thrive.

It can also point to the fact that you enjoy the company of other like-minded people. If this is absent in your life, the bat calls on you to seek out your kin. Draw on the bat’s natural social side to improve already existing relationships. 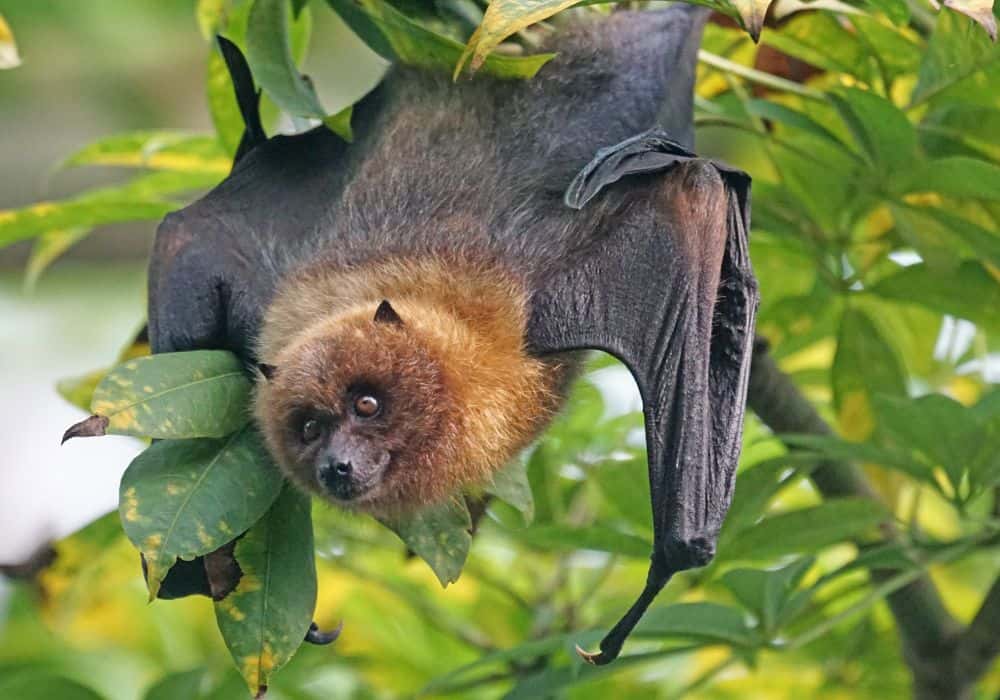 Power animals can be seen as a resource – draw on their help and strength whenever needed.

On a physical level, the bat is a helpful power to invoke. The old saying ‘Blind as a bat’ is false, as bats have excellent vision. But the most important sense is their use of echolocation, which allows them to fly at night.

This ability to move in the dark is an excellent symbol of the bat’s ability to overcome the odds. Like the bat, you have an inner strength that can help you prevail. Trust your instincts, even though it may look impossible. Invoke the bat’s help, and formulate a map to overcome your challenges, even in the darkest times.

The bat is also an ideal power animal for protection. They nest in dark caves and hang upside down from the roof. They are free from predators and can hide in safety. If you’re feeling overwhelmed and want sanctuary, the bat can help you find solace. And because they form big colonies, the bat can also help you find comfort in friends and family.

Initially, the bat’s appearance in a dream can invoke fear and confusion. We still associate them with vampires and evil deeds, and quite often, a bat will fly frantically or bite someone as part of the vision.

As a flying creature, a bat in a dream can also symbolize freedom, soaring to the sky and breaking free from restraints. But the bat is a symbolic flyer – it travels at night under the moonlight, where no other animals can see it. Perhaps you want a change but fear other people knowing about it?

The bat can also signify rebirth. The bat may retreat to its cave, only to remerge anew. Are you about to make a significant change in life? Are you worried about its outcome? The bat recognizes this anxiety and, again, challenges you to face its fears upfront.

Finally, we tend to often dream about groups of bats. While this might be menacing, seeing so many flapping their wings remember – the bat is a communal animal and draws strength from its kin. It would be best if you did likewise. But if the bat is on its own, perhaps this points to your feeling of isolation. You may need to work on your connections, build your colony, and feel the safety in numbers.

Omens are significant events that can signal good or bad changes in your life. Most often, this is when we see the spirit animal in person.

Bats often roost in caves but are known to live in ruins, trees, and old farmyard buildings too. When disturbed, they can flutter about and easily frighten you. You can also spot them before sunrise, flying home.

Bat is not necessarily a bad omen to receive – remember, they primarily symbolize rebirth. Perhaps there’s a moment in your life that clearly shows something that needs to change. The bat is there to help you realize this change.

The bat is adaptive and has several expertly honed skills to survive. Seeing a bat may give you the confidence to overcome life challenges. Like the bat, you can soar high or find safety in the shadows – your choice.

In many cultures, bats visiting your home are signals of lousy luck. But this is rooted in superstition. What if the opposite is true? Bats take shelter in quiet, secure places. They enjoy solitude and peace. Perhaps the visit shows that the bat views your home as a sanctuary and approves of it.

Bats have suffered a very negative reputation throughout history. Perhaps it’s because they’re flying mammals, are nocturnal, or sleep upside down – but early civilizations grew very wary of them.

We can see this clearly in what bats symbolize in various cultures. Let’s take a look at some examples:

Bats have often symbolized the Devil, hedonism, and satanic rituals throughout Christianity. But where does this modern symbolism come from?

Although references in the bible are scarce, all refer to the bat as ‘unclean’ and unfit to be eaten (Leviticus 11:13-19). Similarly, in Isaiah 2:20, bats symbolized idolatry and worshipping false gods.

Throughout Christian artwork, devils often had bat wings. Bats, in turn, acted as messengers of Lucifer, appearing as evil spirits in both paintings and stories.

In Homer’s The Odyssey, bays symbolized the souls of the dead. When they flew into caves, they were seeking passage into the underworld.

In the famous story collection, Aesop’s Fables, written by Greek slave Aesop between 620 and 564 BC, the bat features in its own story ‘The Bat, The Birds, and the Beasts’; the birds and beasts were fighting, and the bat tried to play both sides of the argument. When both groups of animals reached peace, they all shunned the bat as a traitor. 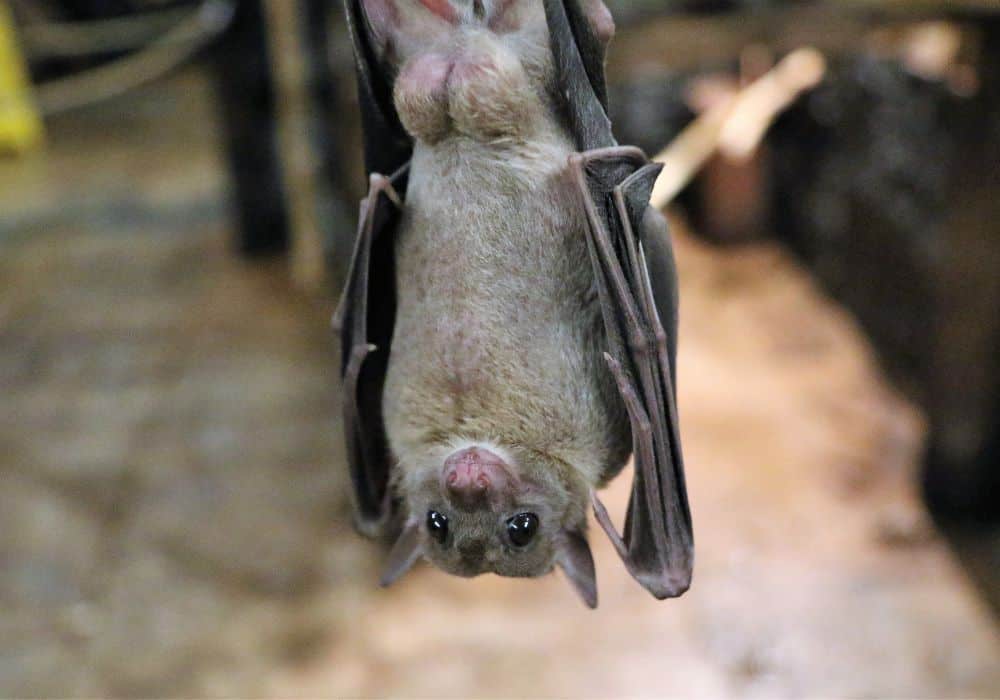 Celtic mythology saw the bat as an omen of death, misfortune, and trickery, and often, they were symbols of shapeshifters, ghosts, and fairies. Some beliefs suggested they were related to witches; if they came too close to a person, they marked them for ‘eternal damnation.’

The Celts also celebrated Samhain, what we now call Halloween. This festival featured bats and other nocturnal animals prominently, as it marked the darkening of days. Modern Halloween is often a scary celebration, with bats commonly used alongside vampires, witches, and spirits.

Although the bat was seen as a demonic animal since early civilizations, Irish author Bram Stoker cemented the bat as a symbol of vampires in his work Dracula in 1897.

In Mayan mythology, there was a Bat God named Camazotz, which translates as ‘death bat’ in the Kʼicheʼ language. He symbolized nighttime and sacrifice.

Several stories depict him as a demonic entity with bat wings who was a harbinger of destruction and misfortune. In one grizzly tale, for example, Camazotz was one of four animals to wipe out all of humanity.

Although Native American tribes had unique interpretations of bats, most reached the same conclusion – bats were omens of rebirth, darkness, death, and community.

Tribes observed how the bat flew at dusk, thinking it bridged the land of the living with the other world. They also observed how colonies lived together and were social animals.

China inspired Japanese mythology, which also saw bats as symbols of good fortune and protective spirits. The word for bat, koumori, is thought to mean ‘river protector,’ casting bats in a positive light.

Throughout history, bats have had a checkered past and often are misunderstood and misrepresented.

Although we commonly associate them with demons, mischief, and vampires nowadays, nothing can deny them as powerful spirit animals whose origins symbolize rebirth, survival, and good fortune.

Many cultures and mythologies honor them as friends and allies, representing Their unorthodox appearance, and the fact they are flying mammals only adds to their broad skillset and significance.

Don’t be alarmed by a bat as your spirit guide. After all, their abilities can help you navigate even the dark periods of your life – and bring you to safety.