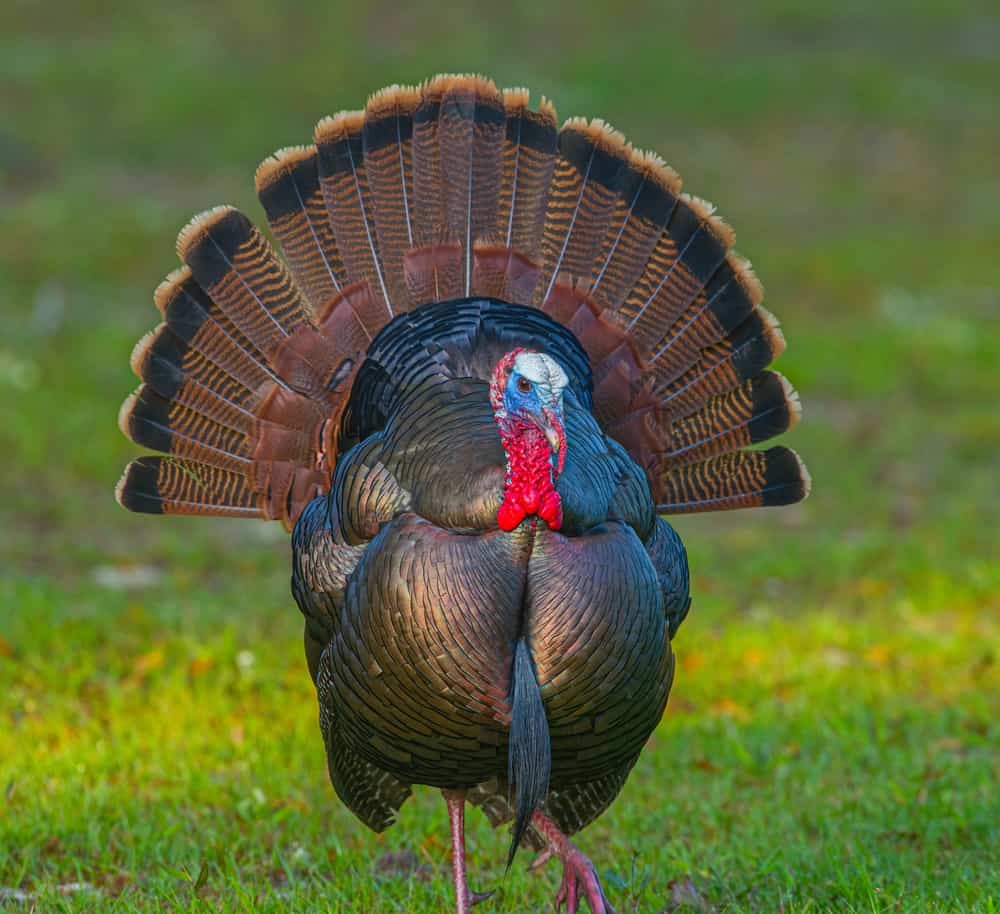 If you live in the western world, then you are probably familiar with turkey as a staple for most American and some European holiday dinners. The turkey bird has always been considered a symbol of celebration and has been domesticated for over 2,000 years.

The turkey belongs to the genus Meleagris, which originates from an Ancient Greek word meaning guineafowl. There are two different turkey species that are both native to North America; the wild turkey which can be found in Central and Eastern North America, and the ocellated turkey, with a habitat in the forests of the Yucatán Peninsula in Mexico.

Besides its celebratory meaning, the turkey has played a significant part in the culture of many civilizations. In this article, we’ll explore the tales and symbolic meanings of turkey, as well as turkey symbolism in some aspects of spirituality.

Keep on reading to learn more about turkey symbolism! 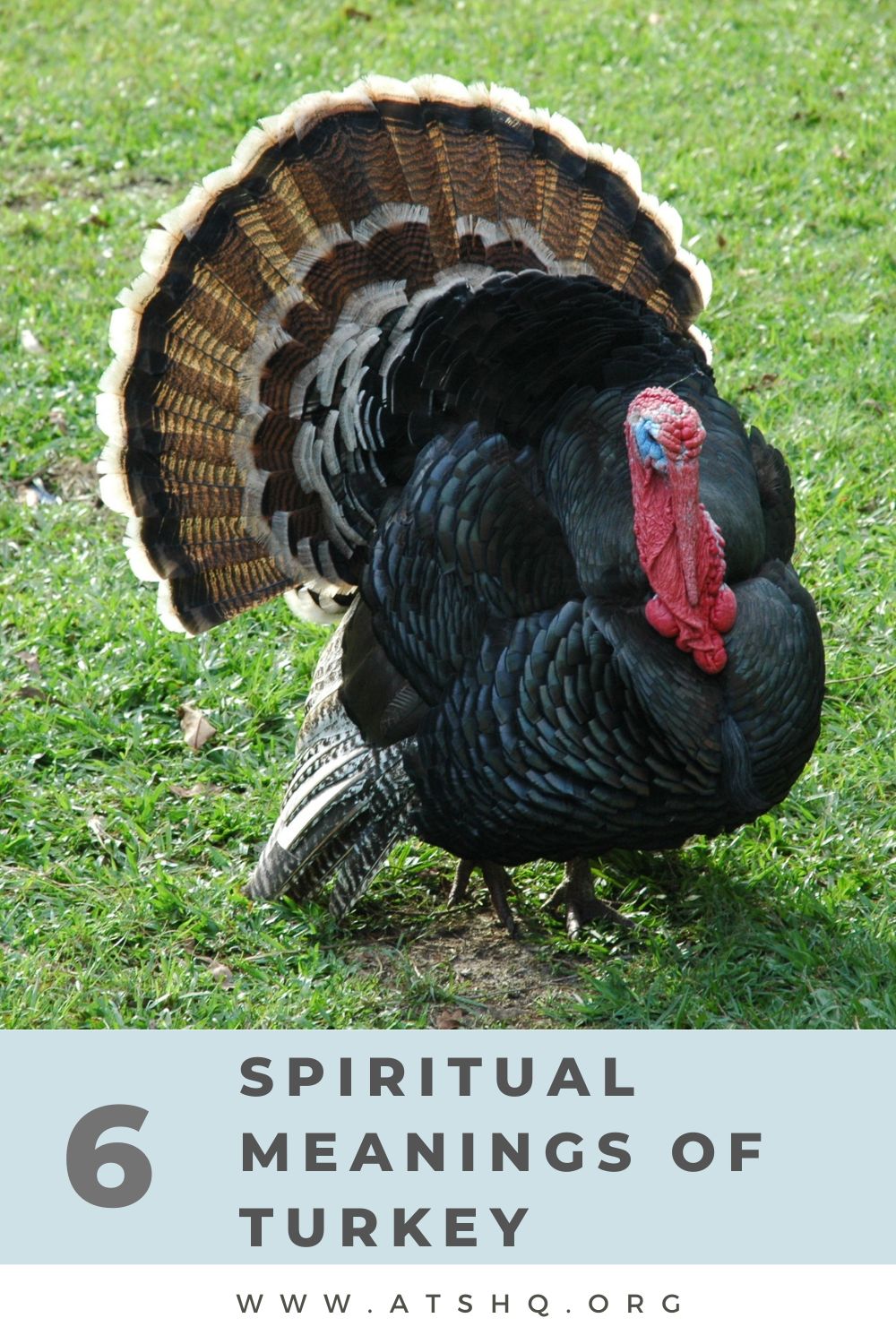 The turkey’s name most likely comes from a misunderstanding. When the first European settlers discovered wild turkeys in North America, they misidentified them as guineafowl. The guineafowl was a common type of bird that was imported to Europe through Turkey.

Another theory suggests that the first turkeys to arrive in England were not directly from America but through Middle Eastern merchants. These merchants had domesticated the turkey and mislabeled it as the same guineafowl. In the end, despite the identification of the two different birds, the American turkey retained its name.

Turkeys in North America are an essential part of the Thanksgiving dinner table. Thus, most people associate the turkey bird with love, family, and gratitude. Since turkeys also live in large flocks and help each other out, they often act as symbols of teamwork and cooperation.

Similar to most ground-feeding birds, male turkeys are larger and more colorful. They also have their distinct wide-fanned tail, as well as the snood, which is a fleshy bump on their forehead. A longer snood gives an edge to male turkey when it comes to mating.

Male turkeys also tend to fight a lot, both among themselves as well as with other species. They do this to assert dominance and create a hierarchy in their group. When another animal or even a human trespasses their territory, they get very defensive and will charge at anything no matter its size. This marks them as symbols of protection, masculinity, and strength.

Wild turkeys are known to attack humans if they deem them subordinate. Even domesticated turkeys have shown this behavior in residential areas. Certain states, like Massachusetts, have issued specific instructions to follow in order to protect yourself from wild turkeys.

Sometimes, the term turkey is used as an insult to indicate that someone is a fool or a coward. This likely derives from the similarity between a turkey and a chicken. However, this goes against the nature of the turkey as a true defender of its territory and its kind.

In fact, it also goes against the nature that the great Benjamin Franklin envisioned for the bird. Franklin was an avid supporter of the morality and brave spirit of the turkey. He even proposed in one of his letters that it replace the bald eagle as the symbol of America.

According to Franklin, the bald eagle has bad morale and will often steal prey from other creatures when it is lazy and doesn’t hunt. Instead, the turkey will roam for many miles in order to find food.

Its bravery is also unparalleled, as it will stand up to anybody to defend its territory. Not to mention that the turkey is a native bird to America, whereas there are several places where bald eagles exist.

Since turkeys are native birds of North America, they have always been a part of the culture of different Native American civilizations. Turkeys were one of the first animals to be domesticated by Native Americans, with the domestication occurring in two distinct phases.

The first domestication was by an ancient Native American tribe called Ancestral Puebloans, also known as “Anasazi”. This tribe used to live in the southwest, close to the place known as the Four Corners. The second domestication occurred in South Mexico by the Aztecs.

The domestication of the turkey happened for several reasons. Even though some people utilized turkeys as a food resource, most held them in very high esteem and maintained them for ritual purposes. Several turkeys have been found buried next to humans, as the turkey was believed to be a great companion for the afterlife.

Also, there are several myths about how the turkey was responsible for the fertility of the land. In one of those myths, a turkey carried lots of seeds and vegetables in its feathers during a great flood. Since it could not swim properly due to the weight, it kept craning its neck to stay afloat. This resulted in the long necks of turkeys today.

Other Native American cultures treated the turkey as royalty or even as a god. The Mayans viewed the turkey as a symbol of fertility and often sacrificed one every New Year. Still, they regarded the bird as one with mystical powers that rich people could only own. One Mayan king even had a nickname that included the word “turkey”.

The Aztecs believed that the turkey was a god. They had a specific name for it -Chalchiuhtotolin- and worshiped it like all other deities. For the Hopi tribe, the turkey formed a connection with nature. They would often perform dances and rituals wearing costumes and feathers like turkeys. 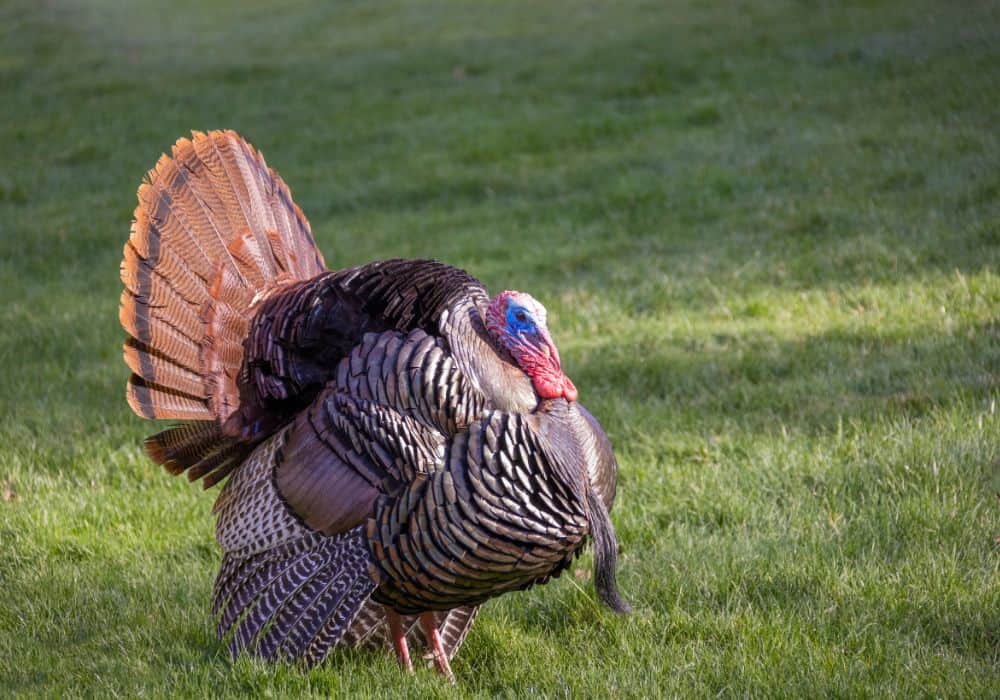 Turkeys are also prevalent in dreams and can have several meanings. One of the most popular ones is that of abundance. If your dreams include a turkey, it can indicate imminent growth. If you’re a farmer, expect some good crops that will help you financially. If you own a business, it will begin to thrive soon.

If you work in an office and see a dream with a flying turkey, it might indicate that there is an opportunity for you to rise through the ranks. Work hard, try to put yourself out there, and you might just clinch that promotion you’ve wanted for so long.

If your dream includes a caged turkey, it is usually a bad sign. It indicates that you are trying to get out of a bad habit or solve one of your problems, and someone is holding you back. Examine all the people close to you to see who is depriving you of your freedom.

If you see a single turkey or a flock of birds chatting and making a lot of noise, it usually indicates that you need to have a conversation with someone. If you’ve been holding back on discussing an important topic with a friend or colleague, now is the time to do so.

A dead turkey in your dreams means your pride and self-esteem are hurting. If you are the one killing the turkey, it means that you are the one that is destroying your confidence. You constantly miss opportunities because you think you are not good enough. It’s time to end this and start believing in yourself more!

Seeing yourself feeding a turkey or eating a turkey is usually a sign of upcoming prosperity. Your business will begin to flourish, or you will get a pay raise if you work for someone else. If you are cooking a turkey, it indicates that you will soon host a large dinner for friends or family that you haven’t seen in a while.

Tattoo symbolism can vary significantly from person to person. However, some general symbolic meanings of a turkey tattoo include generosity, prosperity, and self-confidence. Turkeys are so confident in themselves that they will fight anyone to assert their dominance. A turkey tattoo might also act as a reminder for the holiday season.

The turkey spirit animal can have many symbolic meanings for you. If it appears before you, look around, and you’ll see yourself filled with an abundance of physical and mental resources. Try to take advantage of them in order to better yourself. But don’t forget to grow and care for them so they don’t run out.

Also, the turkey spirit animal might be trying to tell you that someone close to you is in need of help. Turkeys are team players first and foremost and are always available to help their kind. Sometimes, though, people are too prideful to ask for help. So, offer them a helping hand, and they will gladly appreciate it. This also includes your coworkers and community.

The turkey also has a deep connection with the Earth Mother. If the turkey spirit animal appears before you, you might need to question your ties to harmony and nature. 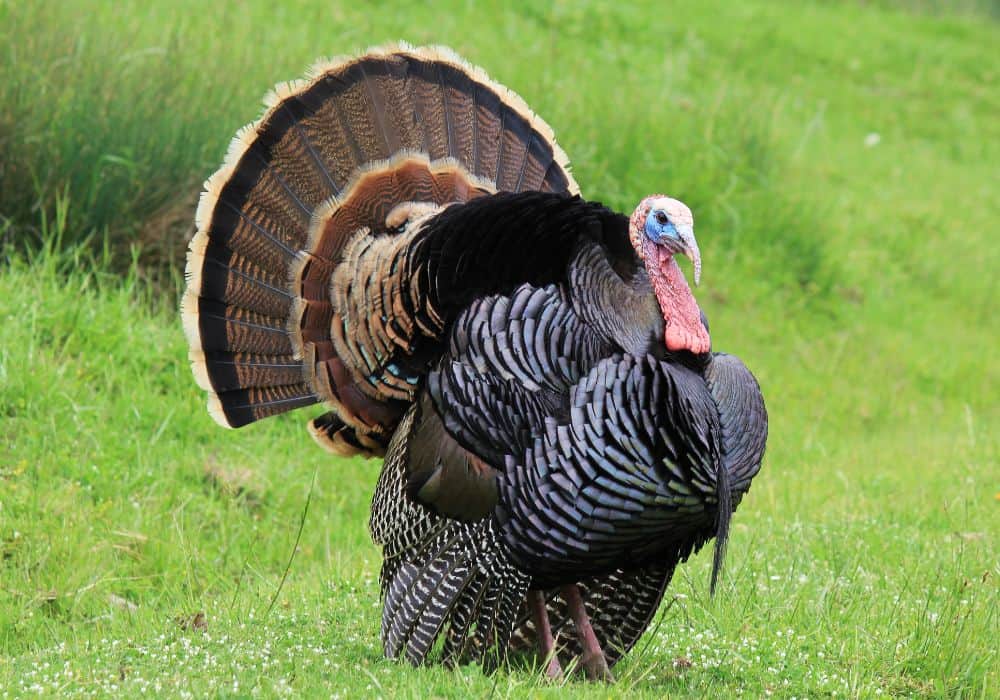 A person with the turkey totem animal is often grounded and strongly connected to their home and family. After all, the turkey is a social animal that lives in large families and is also heavily tied with North America.

Individuals with the turkey totem animal are born adventurers. The turkey sometimes travels for many hours towards the unknown to find food. Like the traveling turkey, you’re always walking down your path with the confidence that there is an end goal for you.

Another trait of people with the turkey totem is their honor and work ethic. They don’t mind working for several hours if it means they can prosper and offer this prosperity to their friends and family. They love to share all their spoils and make everyone happy, which, in turn, makes them happy.

However, you must be careful and avoid people who want to take advantage of your kindness and generosity. Many malicious individuals will think you are a fool and try to exploit your generosity for their own benefit. You need to be able to distinguish these toxic people and remove them from your life.

Finally, don’t forget to take care of yourself. Sometimes giving to others constantly means forgetting about your physical or mental health. If you are struggling, take advantage of your deep connections with nature. Go for a walk in the park to destress and clear your mind. This way, you’ll be able to have much more energy to give to others.

If your territory or your loved ones are under attack and you feel weak or scared, call upon the turkey power animal to help you protect them. Turkeys are such fierce protectors that they will not hesitate to charge at anyone, even if victory is not guaranteed. Their natural instinct to guard their kind is what fuels this courageous behavior.

You might have also noticed that turkeys sometimes run around aimlessly and look like they are panicking under threat. However, this couldn’t be further from the truth. They are simply trying to disorient their adversaries by appearing foolish and panicked.

If you’ve ever thought of the turkey as just food for Thanksgiving, it might be time to reconsider. Turkey has been around for ages and has played a significant role in the cultural development of civilizations.

Also, its unique characteristics like courage and tendency to help and protect others are traits we should all learn from and become better at. So, next time you see a turkey, consider this bird’s symbolic meaning instead of imagining it on your plate with some gravy!