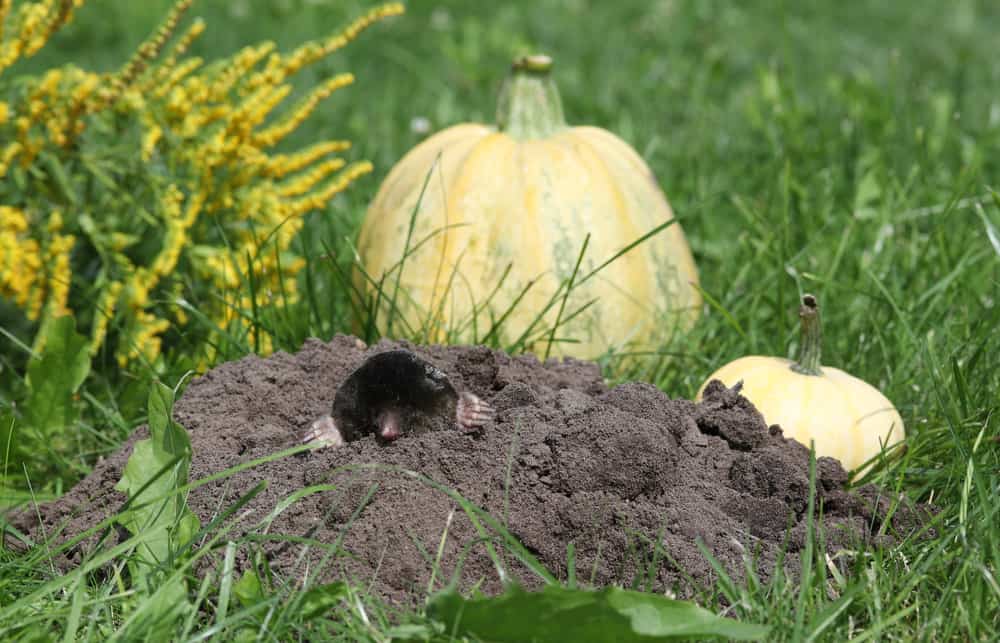 Moles are by far the most unusual creatures on earth, from how they look to where they live. Most people believe they are related to rodents, but unlike mice and rats, moles are mammals.

They can be found worldwide and maybe even in your garden. What do moles eat? Here, you’ll find out.

What Do Moles Eat?

Moles’ bodies are cylindrical with fur that varies from grey, brown, and even white. Their eyes and ears are unnoticeable, and they also possess powerful forelimbs adapted for digging.

The tunnels moles dig (mole runs) are actually for trapping their prey. Moles have heightened senses and can detect when insects fall into their tunnels from a distance.

Moles have a great sense of smell that enables them to determine the direction and distance of their prey. The star-nosed mole can find, catch and eat food faster than the human eye can follow.

These mammals have voracious (greedy) appetites. Moles consume about 70-100% of their body weight every day. They tend to search for food more actively during the rainy seasons. This is because the soil texture is fit for digging.

Contrary to popular belief, moles are neither herbivores nor omnivores. They primarily feed on insects, and hence they are insectivores.

With that said, what do moles eat? Of all the insects that moles eat, they enjoy earthworms most. Below is a more detailed description of a moles diet:

Earthworms also serve as the primary water source of moles because of their high water content. When hunting for earthworms and other prey, moles release toxins that paralyze them, keeping them from escaping.

All the prey items listed above are readily available in the dirt. Because of this, moles rarely come to the surface in search of food. In captivity, moles are sometimes fed mutton, frogs, and even cheese. 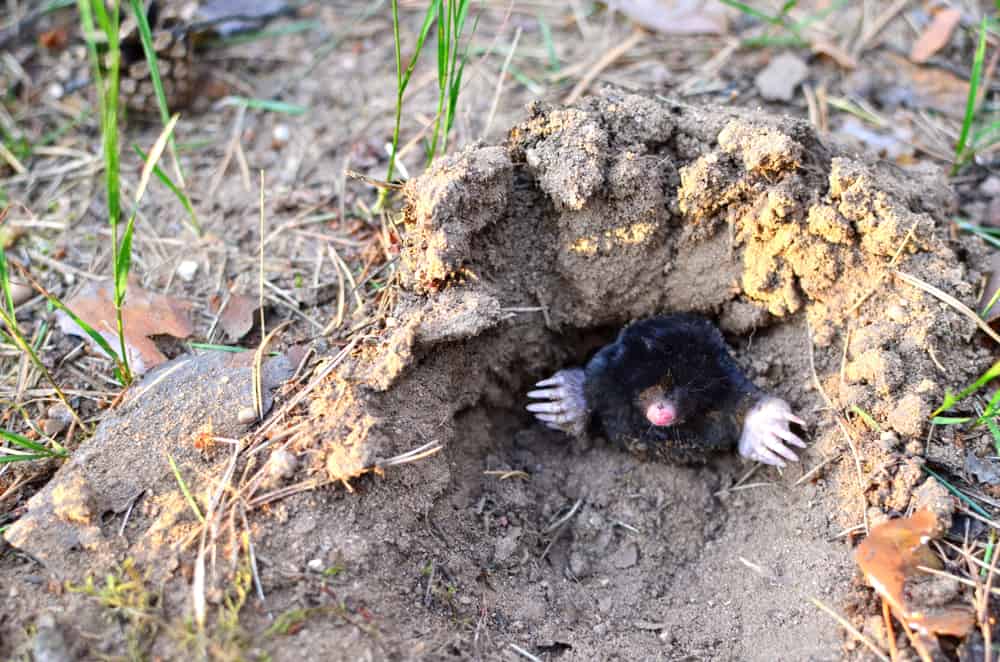 People tend to mistake moles for other pests due to their destructive tendencies when searching for food. When moles burrow in search of food, they often end up in people’s yards. As they go about their business, moles leave a trail of destruction behind them.

Moles leave irregular trails when they burrow (dig) around in the soil. They push loose dirt to the surface, creating irregular patterns. These uneven patterns are called ‘mole runs.’

Sometimes moles may dig deeper than usual when seeking food. During these times, they may pause to push loose dirt to the surface. This leads to the formation of piles of soil about 2-8 inches high called molehills. Countless numbers will be observed in your garden when moles pay you a visit.

Contrary to popular belief, moles don’t feed on vegetation. The damage caused to your veggies in the garden is usually a result of excessive digging by the moles. In their pursuit for a meal, they may damage your veggies unintentionally.

The complex tunnels moles create are used as pathways by other pests to access people’s yards. Rodents such as voles and gophers will use the tunnels to find their way to gardens. They will feed on the crops planted there and, in the process, may also cause damage.

Earthworms feed on dead organic matter in such large amounts that it is almost equal to their weight. The excess food is excreted in what is known as ‘worm castings’ that improves soil quality. When moles feed on earthworms, they deprive the soil of nutrients.

Lastly, molehills can cause injury as they are dangerous to walk on.

Apart from destroying vegetation, moles also pose several health threats. They are carriers of parasites that can harm human beings and animals. Such parasites include ticks, fleas, and mites that can spread diseases to your pets. Moreover, moles are also carriers of rabies.

How To Get Rid of Moles In Garden 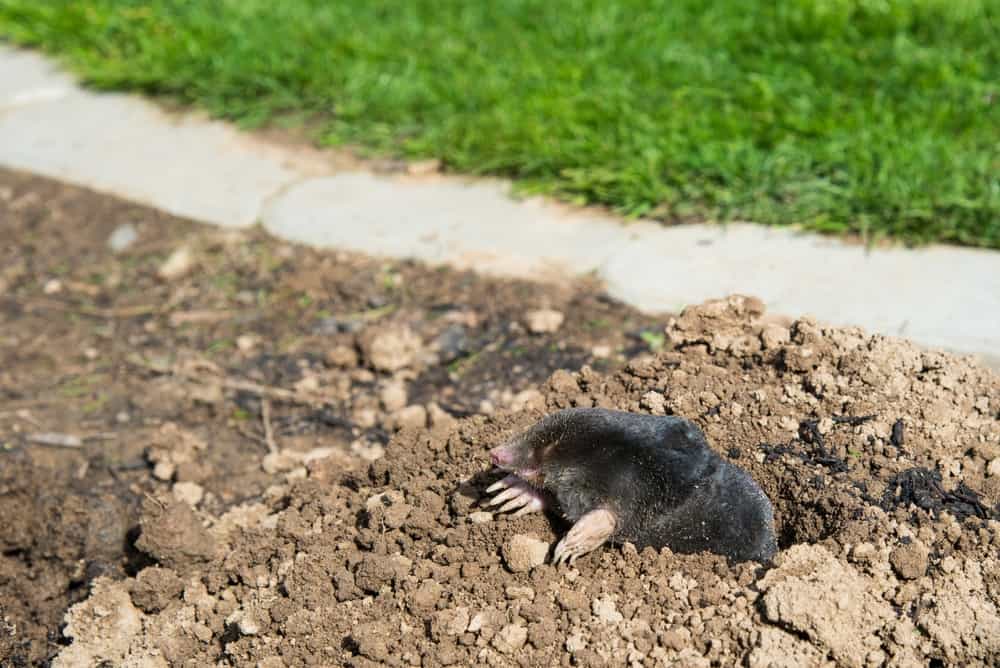 Yes. Most people consider moles pests. Why? Because they are a nuisance and cause a lot of damage to your yard. However, did you know that moles can also be beneficial to your garden? They help improve soil aeration.

That’s it, though! Moles do more harm than good. If these pests are in your garden and you want them gone, here are tips that could come in handy:

To make your repellent, you need three parts castor oil and one part dish soap. Start by mixing four tablespoons of the mixture with 3 liters of water. Apply it on the tunnels and entrances in your garden.

Alternatively, you can buy repellents and apply them to your garden. Read the instructions carefully before use.

You should follow the instructions given depending on the size of the area moles occupy and the number of moles present.

The secret to capturing moles is by setting the traps in the correct places.

For the traps to effectively work, place them along the stretches of tunnels the mole regularly uses. Setting the traps on the molehills will be ineffective. Select long, straight tunnels and entrances and exits of the tunnels. Avoid the tunnels with lots of twists and turns.

This method is humane as the mole is not killed. Alternatively, you can poison bait so that when ingested by the mole, it dies.

When worst comes to worst, what do you do? Call the professionals. They are better equipped to handle your pest problem quickly.

How many moles live together?

Moles are solitary creatures and only come together during mating season. They may live in the same area, but they don’t live together. A maximum of three to five moles lives in one acre.

Generally, moles avoid each other. Males can get violent when they bump into each other and will often fight.

Are moles good for your garden?

Yes. Moles help improve soil aeration. They also prey on a large number of insects considered pests. Most of the time, moles are blamed for plant destruction they didn’t cause.

Sometimes it would be better to tolerate them as they eventually leave.

No. Moles can see but have poor eyesight. To make up for their poor sight, moles have a great sense of smell and hearing.

You definitely don’t want these creatures in your garden. The destruction they cause will have you devastated. Luckily, if you follow these guidelines, getting rid of them will be easier.

Remember to keep your garden in top-notch condition and regularly mow your lawn. Doing so will help keep your homestead mole-free.