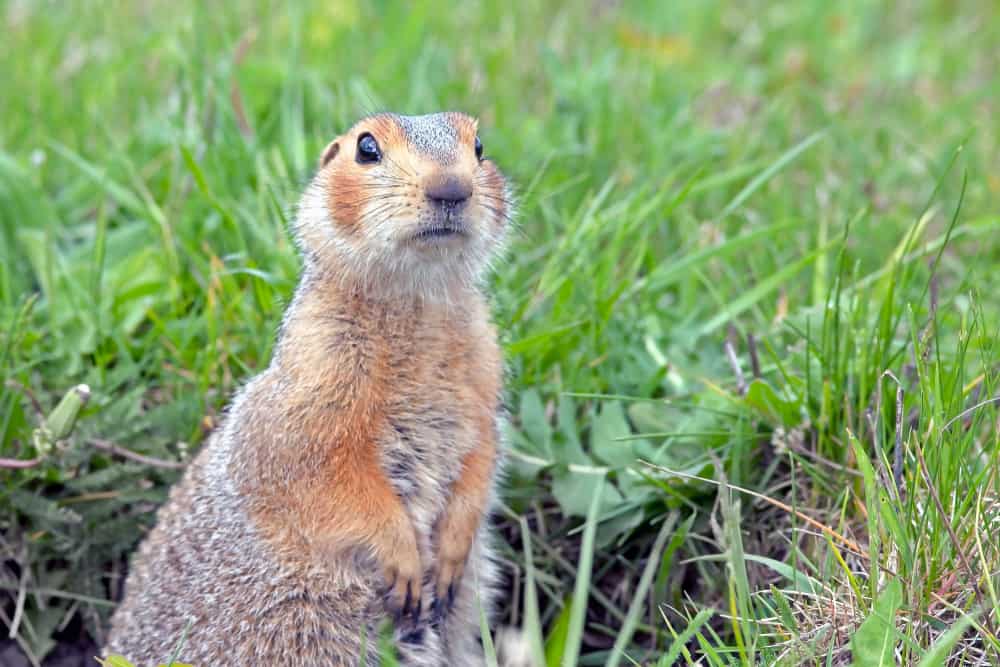 When you think of rodents, your mind will typically start thinking about mice and rats. However, the rodent family is actually far bigger than those two animals. In fact, it is the largest group of mammals in the world with over 2000 different species.

The species of rodent that we are going to be looking at today is gophers. Residing in woodland/forest areas in North and Central America, these furry little things are fascinating when you take a deeper look.

In this article, we are going to be looking at what their diet consists of while also revealing some interesting little tidbits about them. Let’s get started.

The most common type of gopher is the pocket gopher which can grow to be around 14 inches in length. They are fairly easy to identify thanks to their long, hard front teeth (which actually sit in front of their lips on their mouths), small eyes and ears and tiny tails.

They are famed in parts of America for being destructive pests that can tear apart gardens and farmland very quickly and effectively, leaving gopher mounds dotted around everywhere.

As far as rodents go, gophers are intelligent. Their intelligence is demonstrated through their highly complex underground burrows, which feature various intertwining tunnels and chambers connected. They use their sharp teeth and claws to create these burrows and despite their sheer size, they are only ever typically lived in by one gopher at a time.

The only exception to this is if a female gopher is caring after a new cub. When a female reproduces, she will give birth to a litter of 3-4 pups. They have to grow up fast though, because after around 5 weeks or so they are sent out into the wild to create their own burrow and fend for themselves.

That doesn’t mean to say that gophers are entirely independent mammals who don’t love each other. Many people who have tackled a gopher issue have recalled that they scream when one of their family members is seemingly under attack in a bid, to draw attention to the situation and to potentially save them.

While it would be fair to assume that pocket gophers are called that due to their small size, it is actually due to another reason. Their furry cheeks are so big that they can use them to store food to take back to their burrows, much in the same way humans store food in their pockets too for transportation reasons. While we have pouches on our pants, gophers have cheek pouches.

What do gophers eat? 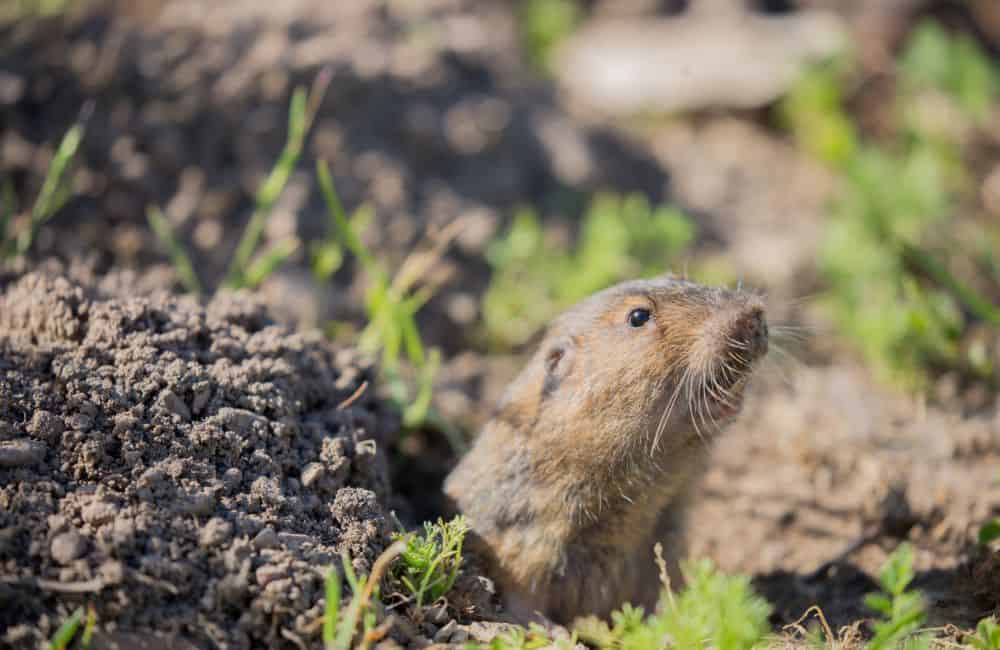 Gophers are strictly herbivores meaning they have zero interest in attacking and eating other mammals. Instead, they are more than happy to go about their lives eating vegetation every day. So, not only can they ruin your garden landscape by digging it up but they also wouldn’t need a second invitation to munch away at your garden plants.

They aren’t particularly fussy about which plants they eat, but they do have a preference in regards to the part of the plant they eat. Their first choice is the roots and tubers, but they will eat the tops of them if they have to. In addition to plants, they are also happy enough simply to eat grass.

They are partial to vegetables such as carrots, sweet potato, peas, brussels sprouts, onions, garlic, and broccoli.

The fact they are purely omnivores is somewhat surprising considering they have the characteristics of a typical carnivore – e.g. the sharp claws and the sharp teeth. However, as they don’t need to hunt they simply just pop their head out of burrows and grab whatever plants are nearby.

They will nearly always store any food they pick up on their travels inside their cheeks so they can eat it in their burrows in peace and quiet rather than in the wild where they perhaps don’t feel quite as safe.

They have also been known to rip down the plants from above the surface while in the tunnels in their burrow underground. They can do this by gripping onto the roots and pulling down with their teeth.

What are the predators of gophers? 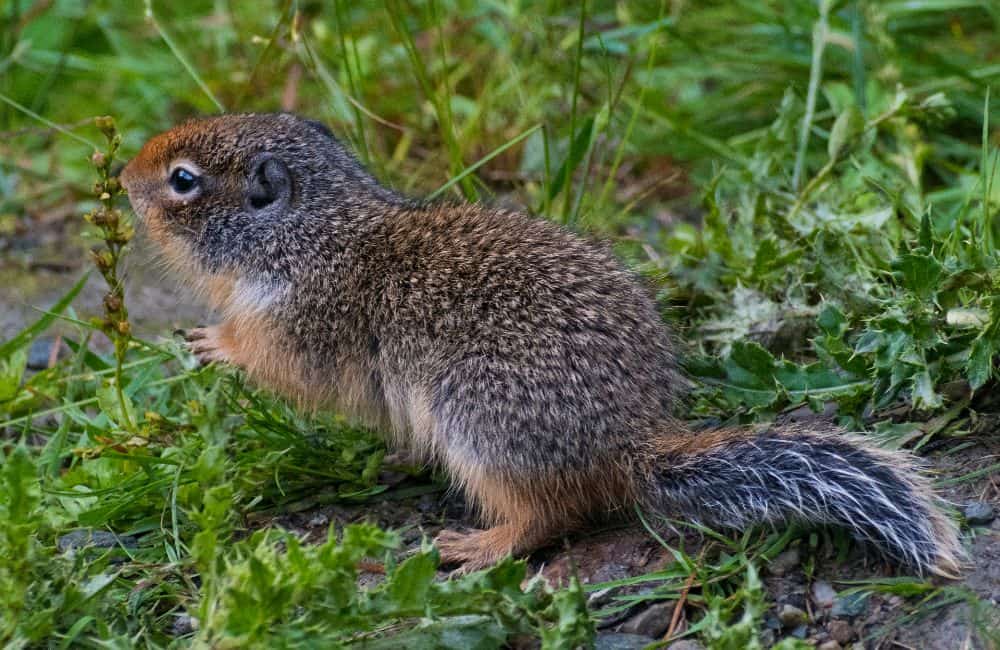 The fact they like to spend a lot of time (an estimated 90% of their lives) in their burrows may have something to do with the fact they have their fair share of predators waiting to pounce at any given moment.

As a result, they are mainly hunted underground with some mammals even entering their burrow to get to them. These types of predators include snakes, badgers, skunks, ground squirrels and weasels.

Despite their sharp teeth and claws, gophers aren’t really built for fighting so once caught 90% of predators have no issue finishing the job, even those that are of a similar height and weight.

During the hours where they do venture out of their burrows, they do have some additional predators which are typically a lot larger and more viscous. These include coyotes, bobcats, foxes, owls and hawks.

The majority of the time, these predators will catch gophers at the burrow entrance when they first pop their heads out to scan the area. They have poor eyesight so they rarely see the attack coming, especially when it’s coming from birds.

Domesticated cats and dogs have also been known to attack and kill gophers so if you’re facing a gopher issue in your back garden then it may well be time to buy a pet. More on this shortly!

How to identify if gophers are destroying your land?

If you are starting to notice that your garden/land is facing certain levels of destruction then you may well have suspicions that gophers are the cause of it. However, as they stay in their burrows for the majority of the day it can be hard to figure out.

With that in mind, here are some tell-tale signs that you are encountering a gopher issue so you can take the next appropriate steps to try and resolve the issue.

Moles are fairly similar to gophers in the sense that they also burrow themselves underground and disturb the sanctity of your garden. The biggest giveaway that you are dealing with a gopher rather than a mole is the shape of the soil damage and mounds. Gophers create kidney-shaped damage, whereas moles will typically leave you with symmetrical damage.

How to get rid of gophers? 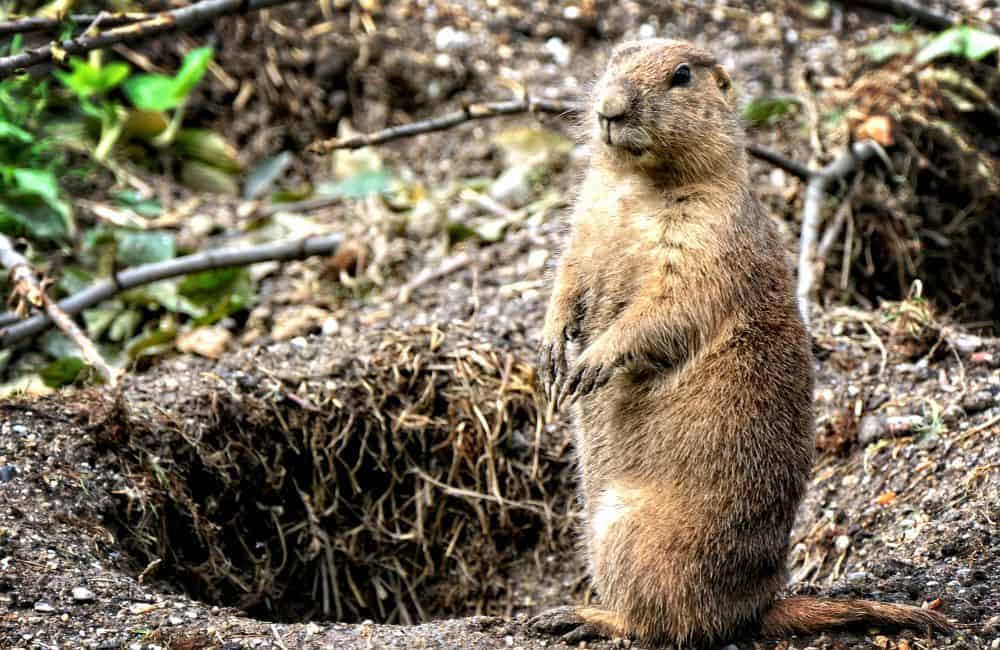 If you have identified that you are facing gopher issues in your garden then don’t worry, there are plenty of options available to you. We try to be as humane as possible with our suggestions so don’t worry, there will be no mention of poison here.

Why gophers are worth keeping around

Just because gophers might be a little bit of a nuisance in your garden doesn’t mean that you should be trying to kill them. While some areas do consider them to be pests, others don’t and that’s because of the key role they play in our ecosystem.

As they spend a lot of their time digging underground, they are helping to aerate the soil in the area. This is a really important and helpful task, especially in farmland where the soil becomes compacted due to the artificial machinery that sits on it all day, every day.

In addition to this, their tunnels are also helpful for flood prevention as rainwater can be stored inside them instead of just sitting on top of your lawn, making it waterlogged in the process. They are also prey for many different predators, meaning they are key components of the food chain.

To conclude, gophers are small rodents that live in the wild. They are solitary animals for the most part but are fiercely loyal on the rare occasions where they are together. They are herbivores so they’re only interested in vegetation, particularly grass and the roots of plants.

We hope that you now know everything there is to know about gophers and are in a good position to deal with any potential gopher issues going forward.