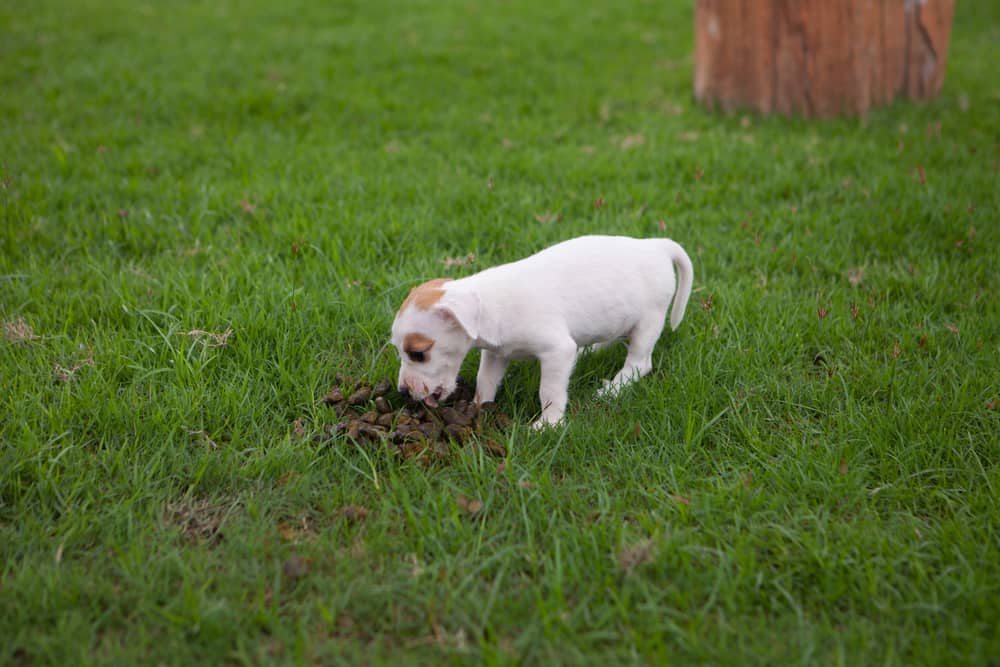 Seeing your dog eating poop out of the cat litter box can be as distressing as it is disgusting. Both as pups and as adults, canines do have the unfortunate habit of eating poop. This habit becomes all the more apparent if you have a feline and a litter box at home, however. Let’s go over why do dogs eat cat poop and what can you do about it?

Is It Normal For Dogs To Eat Cat Poop?

So, what is the reason dogs go after poop, and is it something normal? This behavior is officially called coprophagia and it is indeed “normal”, at least as far as canines are concerned. In fact, dogs are natural scavengers and it’s their instinct to taste and eat anything that smells interesting and might have even just a bit of protein in it.

After all, they eat even garbage when it’s easily accessible. Unfortunately, this scavenger instinct includes your cat’s feces as well as the feces of many other animals.

What is more, dogs learn this behavior from their earliest days as puppies. One of the main things canine mothers do with their newborn pups is to lick them thoroughly and repeatedly to keep them clean of any feces. This behavior also includes eating any feces off the den’s floor to further maintain its cleanliness.

The mother will also typically go out of her way to teach her puppies to eat feces. This is done because – like many other animals – newborns don’t have enough probiotic bacteria in their intestinal tracts. So, the way to acquire such bacteria for proper digestive health is to eat them by consuming other animals’ feces.

As you can see, this disturbing habit actually has some benefits early in the dog’s life. Of course, those benefits stop being relevant once the dog grows up or if it’s raised as a pet, however, explaining that to a dog’s instincts is beyond the skills of even the best canine trainers.

Is It Bad If Your Dog Eats Cat Poop And Why?

Aside from its couple of positives, coprophagia has quite a few negatives too. Fortunately, those aren’t always present either. Most of the time, if your dog takes a snack out of the cat litter box, there won’t be any immediate or significant issues. Dogs have strong digestive tracts and immune systems when healthy and, as omnivore scavengers, they can digest feces easily.

However, even a healthy dog can get infected with something nasty if your cat happens to have it. Stuff such as salmonella or other harmful bacteria often goes unnoticed in felines and your dog can easily catch it after even one nib of cat litter. What’s more, as dogs love to give kisses, they can transmit that salmonella or other disease onto us much more easily than a feline would.

Another issue to watch out for can occur if your cat is on some type of strong medication. In these cases, there are often residual traces of the medication in your cat’s feces. That can sometimes be harmless for your dog but it can also be disastrous in other cases, depending on the type of medication, whether it’s safe for dogs, how much your dog has consumed, whether the dog was healthy to begin with, and so on.

And then, the cat litter itself can preset a problem even if it didn’t have feces in it. Eating too much litter can easily lead to intestinal blockage and bowel movement problems that would necessitate an immediate vet visit. So, pet owners should always watch out for any type of symptoms such as diarrhea, vomiting, constipation, or others.

Why Do Dogs Eat Cat Poop?

While eating poop is a natural behavior for most dogs, there are also additional reasons that can affect your dog’s behavior. Many pet owners start looking into the reasons dogs eat cat poop because this behavior has started pretty suddenly in their pets and wasn’t evident for years before that.

As we outlined above, dogs are scavengers by nature so they just have the instinct of eating interesting and smelly stuff they find. Even if your dog wasn’t taught to eat poop as a pup from its mother, it will still have this scavenger instinct. And, even if it hasn’t displayed that instinct before, it can always be easily triggered by your pet just sniffing something new, different, smelly, and interesting such as your new cat’s litter box.

This is a big reason why it’s always wise to consider whether your lifestyle and preferences fit your dog’s needs for exercise and playtime before you bring your pet home. Even then, the occasional bout of boredom is inevitable. In those cases, your dog can fall victim to the need for “emotional eating” just as humans do when we get bored. The only difference is in what your dog might choose to eat.

Even worse than boredom or mere separation anxiety are actual stress and severe anxiety due to environmental factors. Dogs are easily susceptible to stress and fear, especially when they are confronted with new and unfamiliar phenomena or with an undesirable change of circumstances.

Stuff such as thunderstorms, 4th of July fireworks, a new construction site next door, or just a loud party can easily stress out your dog to the point of it trying to calm itself down with some cat litter treat. Major life changes can also bring lots of stress, be it the loss of a family member, the introduction of a new family member such as a cat, moving to a new home, and so on.

And, then, stress can also be caused by guilt – it’s very common for dogs to accidentally do something they know is “bad” while you’re at work, then get stressed out because of the guilt they feel, and resort to cat litter stress eating.

This is also why trying to train or discipline your dog with negative reinforcement seldom works. Yes, the dog will usually understand your “point” but it will also get stressed out and may even grow resentful toward you, leading to even more cat poop stress eating.

It sounds ridiculous at first, but dogs can also resort to eating cat poop out of a lack of nutrients in their diet. This doesn’t mean that eating cat poop is a good idea for fixing nutritional deficiency in a dog’s diet – it almost never is – however, your dog doesn’t know that.

All your dog “knows” is that it feels something’s missing in its diet and so extra consumption seems necessary. And, as scavengers by nature, the best way your dog knows how to fix such a deficiency is to just start eating everything that smells funky.

To us, the idea of cat poop tasting delicious is ridiculous. Yet, for your dog, cat poop most probably tastes like cat food – and dogs absolutely adore cat food. This is especially true if you feed your cat a strong-scented commercial cat food brand. Such cat foods have such a strong smell that even humans can pick notice it in their cat’s poop – and a dog’s sense of smell is 40 times greater than a human’s.

So, to a dog, cat poop smells very much like food. Add the fact that the cat litter makes the poop dry and devoid of moisture, and even the texture of the cat poop becomes similar to that of a doggie cookie.

Eating cat poop is about much more than just an instinctual habit – often it becomes a learned habit too. This is related to the issues of negative reinforcement training too but it’s a separate issue.

For many pet dogs, especially those suffering from separation anxiety or feeling the need of more attention, any attention is perceived as “a reward”. So, if you start scolding or punishing your dog for going through the cat litter tray, it’s very likely that your dog will reach the conclusion that “hey, I’m getting attention every time I do this.”

And that’s how a new habit is formed. What’s worse, we often keep reinforcing that new habit by further scolding our dog when it eats cat poop, and so on, and so forth.

Having a nutritional or vitamin deficiency can be due to other issues, not just a bad diet. It’s very common for internal parasites in your dog’s system to cause a significant enough lack of nutrients that your dog feels the need to scavenge for food.

Such intestinal parasites can befall your dog in many ways and can often stay in your dog’s system for months or even years undetected. So, if your dog suddenly develops a taste for the cat litter box that it previously ignored, that might be a key symptom that your dog has problems with parasites in its system.

Solutions to Stop Your Dog From Eating Cat Poop

1. Make the litter box inaccessible for your dog

The easiest way to deal with a pet’s bad behavior is often not training but just a quick rearrangement of parts of your home. So, if your dog is considerably larger than your cat, you may want to look into something such as dog-proof litter boxes. These are usually simple closed litter boxes with a small opening for your cat that your large dog can’t get through.

Such enclosed litter boxes have the problem of holding smells in them, however, which can be very unpleasant for your cat if you don’t clean the box often enough.

Another solution is to just use dog-proof baby gates or pet gates. This way, you can cut off an entire area of your home just for your cat and its litter box. Not only will this keep your dog away but it will also give your cat some privacy when it’s doing its business.

If instead, you have a small dog such as a dachshund or a Chihuahua, an alternative solution is to keep the cat litter box somewhere high the dog can’t reach. Cats are excellent climbers after all.

While this won’t always solve the whole problem in and of itself, more frequent cleaning of the litter box is an essential extra step. This will minimize the “delicious” cat food smell coming out of the litter box that is catching your dog’s attention. Switching your cat to a less smelly brand of food can also help.

3. Get rid of the litter box altogether

Dogs need lots of playtimes and for almost all of them, the maxim “a tired dog is a good dog” holds true. So, if your dog has gotten plenty of exercise, playtime, and attention, then the chance of it raiding the cat’s litter box drops exponentially.

Instead of going for punishments and scolding, the better training method is to distract your dog from negative behaviors and to train good behaviors with positive reinforcement. Create enough positive habits and your dog will be less likely to fall into the undesirable ones.

Now that we know that one of the big reasons why do dogs eat cat poop is simple dietary deficiencies, a major solution is to simply make sure your dog eats well.

7. Look for underlying health issues and solve them

Frequent veterinarian visits are annoying but important. Doing this will not only keep your dog healthy but it will also catch underlying issues such as intestinal parasites early before they’ve managed to cause major health problems and/or drive your dog into eating cat poop.

Dogs eating cat poop is a disgusting habit that’s usually harmless but can sometimes cause lots of issues. That risk together with the overall repulsiveness of the habit is why it’s best to nip it in the bud and deal with this behavior early on. Doing so can require some persistence and patience but is always doable if you’re committed enough.