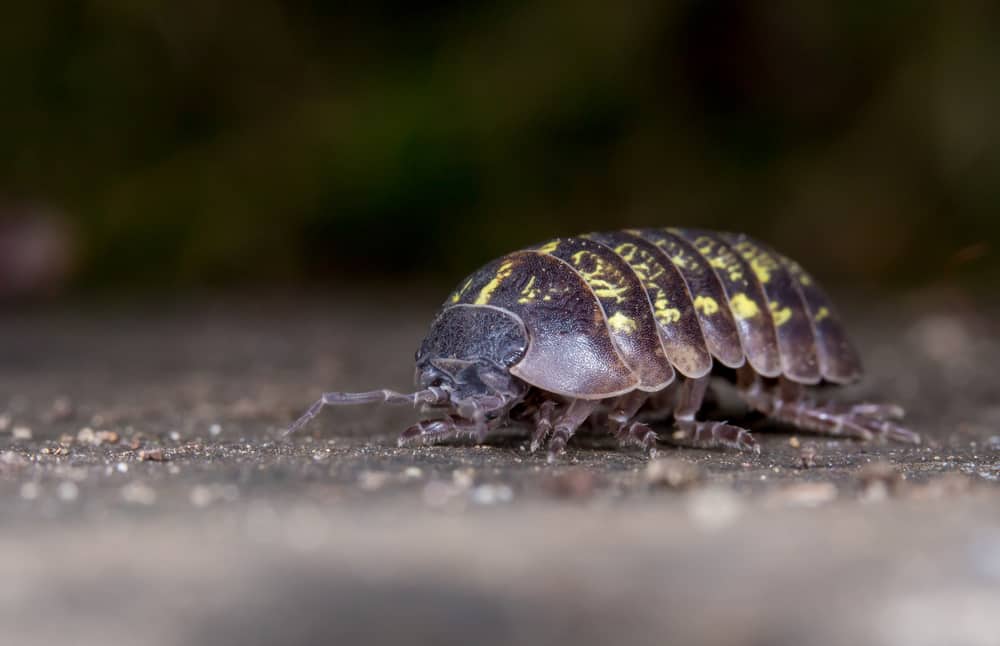 Rolly pollies – also spelled roly poly, and variations on the theme – go by many different names. You may hear them referred to as pill bugs, woodlice, armadillo bugs and our favorite, tiggy-hogs.

But whatever you call them, you may have questions about these fascinating little critters. If you’ve ever wondered, “What do rolly pollies eat?” or “Where do they hang out?” you’ve come to the right place! Read on, as we answer these questions and more … 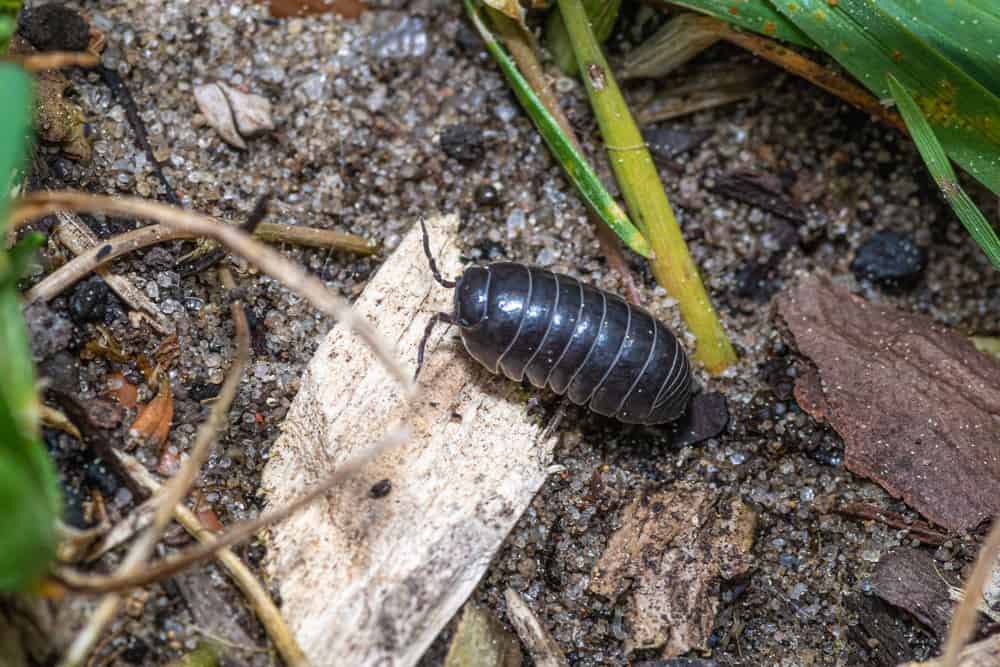 Rolly pollies get their distinctive name from their habit of rolling into balls. They do this when they feel threatened, in much the same way as hedgehogs do.

Rolly pollies, of course, don’t have spikes. But the principle is the same. By curling into a ball, they surround themselves with their hard shell, making them invulnerable to predators.

You’ll usually find rolly pollies in damp, dark places. That’s because they’re descended from marine creatures, and lose moisture more easily than animals with a waxy skin. You can find out more about their ancestors in this YouTube video from Deep Look.

Another thing they have in common with their aquatic ancestors is the way they breathe. Rolly pollies have gills, rather than noses like mammals, or spiracles like insects. And they need a certain amount of moisture in the air in order to respire.

It’s for these reasons that you’ll often find them underneath stones or in piles of damp leaves. And their habit of rolling into balls also helps them conserve moisture. They can’t, however, live underwater.

They navigate using two antennae and two tubes called “uropods” which stick out of the back of their bodies. In some species, the uropods also produce chemicals that deter predators.

Female rolly pollies lay eggs, and plenty of them. They can produce as many as 150 eggs in a year, in three different broods. It takes about 2 months for the eggs to hatch.

Rolly pollies are generally nocturnal. If you want to see them active, it’s best to head out at night. That’s the best time to catch them climbing onto plants, which they sometimes do to eat the eggs of stink bugs. Stink bugs eat a variety of crops, making rolly pollies a friend to gardeners.

What Do Rolly Pollies Eat in the Wild? 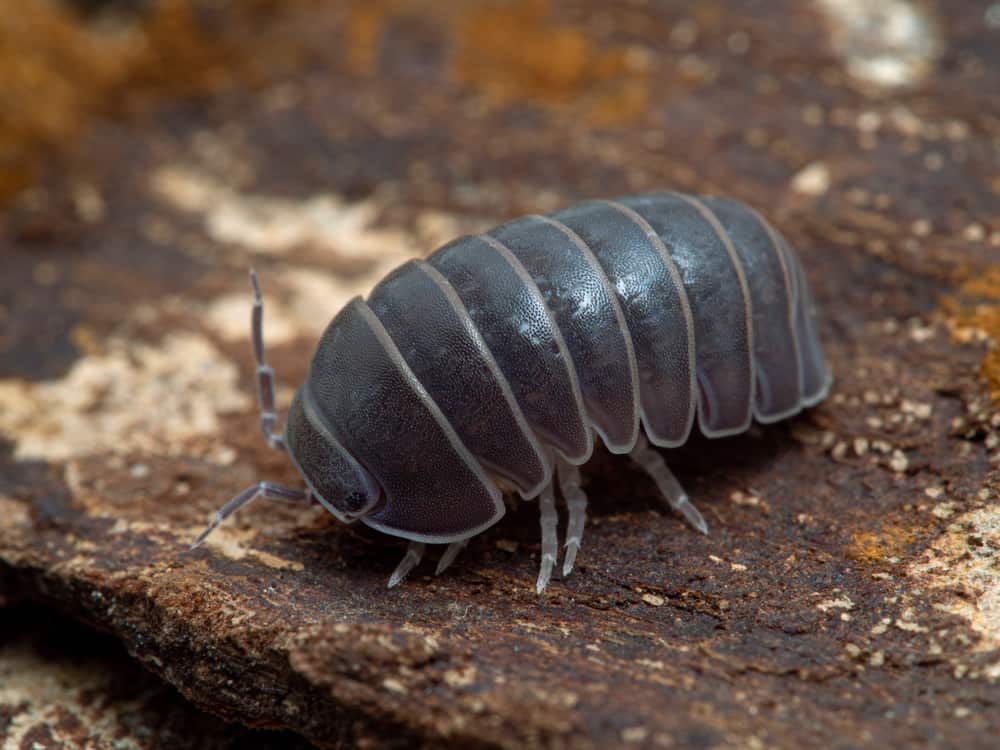 We’ve already claimed that rolly pollies are gardeners’ friends because they eat pests. But they’re also sometimes thought of as pests themselves. So which is true? What do rolly pollies really eat?

Well, they they primarily feed on dead and dying organic matter. While they’ll occasionally eat animal material, it’s much more common to find them feeding on vegetation and fungi.

But they will sometimes eat garden plants when other sources of food are scarce. The kind of damage they do is usually minor. But if you want to avoid it altogether, it’s not difficult. Check out this YouTube video from Homesteading Off the Grid for some simple suggestions.

Now let’s take a look in detail at the foods rolly pollies eat. 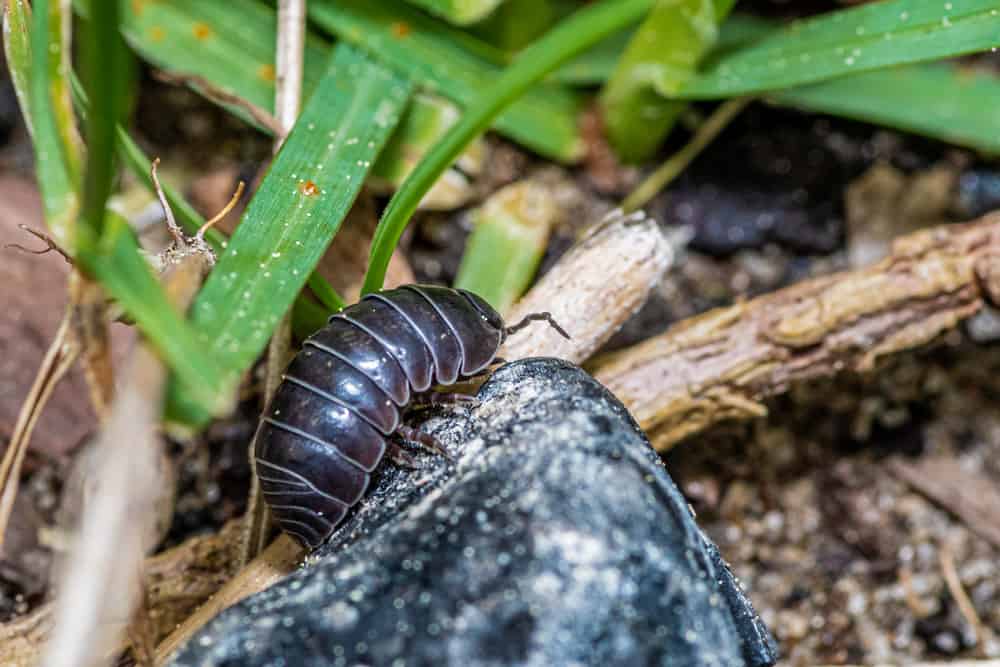 That’s right, while rolly pollies defecate – more on that in a moment – they don’t urinate. Instead, their non-solid waste takes the form of ammonia, which is emitted from their shells as a gas.

It’s smelly – which is why rolly pollies are also known by lots of names likening them to pigs. Around the world their various monikers include tiggy-hogs, parson pigs, chiggy pigs and gramersows.

Unfortunately, their bodies aren’t particularly efficient at processing what they eat. That means that their poo contains lots of valuable minerals, particularly copper.

What’s a bug to do when faced with this problem? Why, eat its own feces, of course! This process is known as coprophagy. And while it might sound disgusting, it’s a great way for the rolly polly to get the nutrients it needs.

Rolly pollies aren’t like most of the other bugs in your garden – they’re crustaceans, not insects. That means they have more in common with crabs and shrimp than with flies or caterpillars.

They’re one of only a few kinds of land-dwelling crustacean. And like their aquatic cousins, they don’t have a waxy coating on their bodies to conserve moisture. That’s why you’ll most often find them in damp, dark places.

Whereas insects have six legs and spiders have eight, mature rolly pollies have no fewer than fourteen. New hatchlings have only twelve, with the final pair developing as they grow.

Their bodies have more segments than those of insects too – eleven, compared to just three for insects. The thorax is made up of seven segments, with a pair of legs attached to each one.

5. They have something in common with kangaroos

No, they don’t jump long distances! Mother rolly pollies do, however, carry their young in a pouch on their abdomen. Rolly pollies begin life as eggs, but continue to live in the pouch for a short while after they hatch. During this time, they receive food and water through the pouch membrane.

6. They shed their skin

One of the most distinctive features of rolly pollies is their hard shell. It makes them look like an armadillo, and indeed, they’re also known as armadillo bugs.

As the rolly polly grows, the hard shell becomes too small and has to be shed. This happens in two stages. At first, the lower half of the shell is lost. Then the top half follows a day or two later.

7. They typically reach 3 to 4 years old

Rolly pollies are surprisingly long lived for such a small creature. They typically live for three or four years, meaning they’re able to successfully over-winter.

They do, however, have predators. Shrews, toads, centipedes and spiders all see the rolly polly as a tasty treat.

8. There are lots of different kinds

There are about 3,500 different species of the bug we know as the rolly polly. And they come from a number of different families.

The type that can roll into balls – hence their name – come mainly from the genera Armadillidiidae, Tylidae and Eubelidae.

9. They’re good for the garden

Rolly pollies are sometimes thought of as pests, but they’re actually very good to have in your garden.

That’s because they help to break down organic matter, in a similar way to earthworms. They also consume heavy metals and increase soil pH. And they can get rid of other pests, like stink bugs, that eat crops.

As we’ve seen, they won’t normally cause any damage to plants. But protecting the base of the stalks is an easy way to deal with that. A paper or plastic cup or bottle with the bottom cut off will do the job perfectly.

10. They may be helping to combat climate change

This YouTube video from Animal Fact Files describes another unexpected benefit of rolly pollies. One of the other things that rolly pollies eat is fungus – and some of the fungi they eat emit carbon dioxide.

So by munching away on that fungi, rolly pollies are reducing the stock of carbon dioxide emitting plant matter. That means that they may be playing their part in slowing global warming and climate change!

11. They have a long history

Rolly pollies have been around for at least 100 million years, the age of the oldest fossils found. That compares to just 300,000 years for Homo sapiens – modern humans.

They were almost certainly around before the supercontinent of Pangea broke up around 175 million years ago. Today, they can be found all around the world.

We hope you’ve enjoyed our look at rolly pollies! These tiny crustaceans have a long and fascinating history. And they’re still making a valuable contribution today, whether they’re helping gardeners or slowing climate change.

Next time you come across a rotting log, why not take a look underneath and see if you can find one? You’ll know lots more about what makes them tick!