You might struggle telling the difference between a turtle and a tortoise. (And we can help with that!) But even among turtles, you have over 300 species to identify. And what they eat depends on their variant. We’ll look at turtles in general and the best thing to feed them.

What do you know about tortoises and turtles? First off, turtles have been around longer. Which means a tortoise is a type of turtle. And turtles are popular enough that people volunteered and rescued them during that infamous Texas blackout. The turtles were cold-stunned. So they were captured, hidden up in a warehouse, then released in warmer waters.

When we (humans) are warm-blooded mammals. So when we feel cold, we can use clothes, heaters (or goosebumps) to warm ourselves up.  Turtles – like tortoises – are cold-blooded reptiles. When they get too cold, they have to sit on a rock and bask in the sun to raise their body temperatures. And when they’re underwater, they can only survive in waters over 50°F.

Below that, they can’t move their bodies and may drown. So if you have turtles at home, warm their water in the winter. Turtles are slimmer and lighter than tortoises, with flattened shells and flipper-like legs. This is because they spend more of their lives in water, unlike their tortoise cousins that love land more. Turtle bodies are better adapted for swimming.

As a pet, turtles can live 20 to 40 years. But sea turtles can live hundreds of years. One of the recent Texas rescues was 150 years old. In the wild, turtles come on land to lay eggs about 150 eggs and bury them. The eggs hatch and find their way back to the ocean. Only about 15 hatchlings make it. So if you’re raising turtles, you’ll have to actively protect the eggs.

Turtle eggs can take 2 or 3 months to hatch. Most turtle species are omnivores, so we’ll focus on that feeding model. Double-check which breed you have though since some are ‘vegan’ while others are carnivorous. You should also confirm whether you’re raising freshwater turtles or saltwater (sea) turtles. Their habits, habitats, maintenance needs, and diets vary.

If you’re stuck between a tortoise and a turtle as a pet, turtles need less space (an aquarium will do) but are less ‘cuddly’. Tortoises are ‘social’ and can be touched more, but are bigger and live longer. But these are both reptiles so they don’t enjoy handling as much as mammals.

In the US, turtles are mostly kept as pets. Some turtle farms breed them for research and export. In Asia, turtle farms supply these reptiles for food and medicine. So what your turtles eat may depend on where they live and why you keep them. Herbivorous or omnivorous turtles eat bugs and insects in addition to algae, grass, and plants. So they may pick soil.

But your turtles aren’t eating the soil itself. They’re sifting through it for appropriate food. Even their tortoise niblings hang out on land and seem to ‘chew’ dirt a lot. But they’re not eating soil either. Animals that eat dirt often have a pica deficiency so they’re drawing calcium from the soil. Reptiles can get calcium from fish and aquatic dishes so they’re good.

If you got your turtle from the pet store, the staff can probably tell you what species your new pet is. So they can advise you on their preference (herbivore/carnivore/omnivore). In the wild, turtles only come up for air, sunshine, or to lay eggs so you don’t need to feed them.

If you’re visiting turtles in a park or zoo, the staff will tell you whether you can feed them or not. In case it’s allowed, the zookeepers will give you the right food. Don’t try to sneak in contraband snacks. You may think it’s a treat, but you could hurt the reptiles’ health.

Foods to Avoid When Feeding Turtles 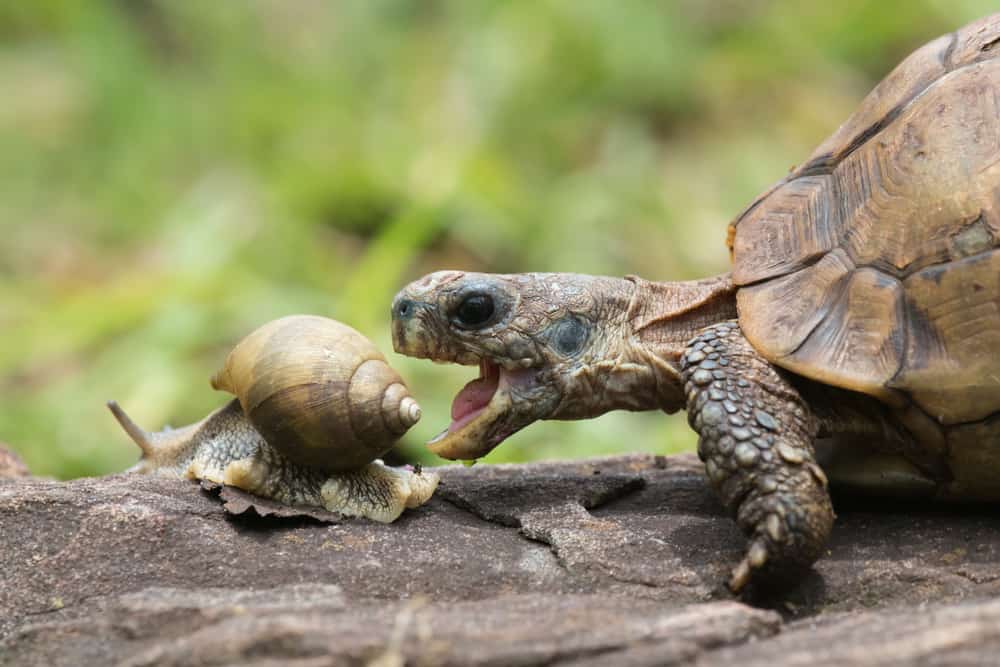 Box turtles are a common pet, and they almost look like tortoises. But even for other turtle types, there are some foods you should avoid if you can. They include:

Don’t rush for the easiest or most convenient food. Offer your turtle a mix of decadent treats and nutritious options. It’s okay for a few dishes to be boring, but mix the textures, colors, and flavors available. The diet should be as close as what your turtle would get in the wild. 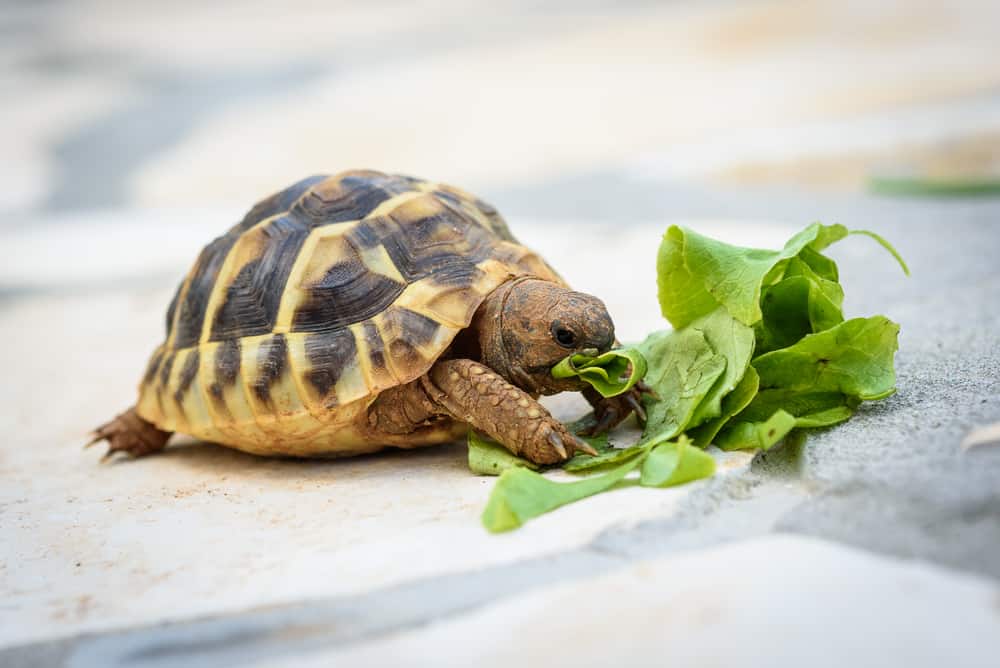 Turtles seem so sedate and move so slowly that it doesn’t seem complicated to feed them. But there are certain do’s and don’ts. These pointers will keep their flippers fabulous and full.

Like all pets, keep your turtle bowls clean and disinfected. You can wash them with dishwashing liquid. Water bowls should be washed and filled with clean water every day. 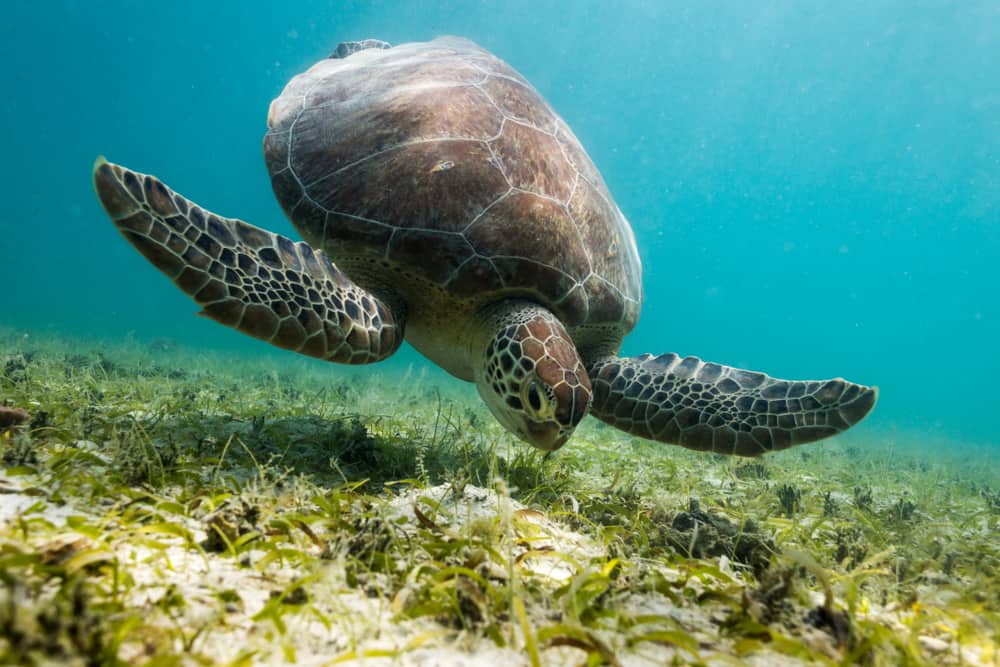 Telling tortoises apart from turtles may have been your biggest question. But there’s much more to consider whether you’re keeping turtles for science or companionship. Here are a few common questions about turtles. And some of them apply to tortoises as well.

1. Can turtles hide in their shells?

All tortoises can retract, and some turtles can as well. But some turtle species are unable to tuck their head and feet into their ‘houses’ so ask the pet store owner if you’re unsure.

2. What do pet turtles live in?

Ask the pet store if your turtle is a lake/river reptile (freshwater) or an ocean/sea reptile (saltwater). Then get an aquarium with the right filters and accessories plus a basking spot.

3. How big do pet turtles get?

Turtle shells are made of keratin. That’s the same stuff your nails are made of. In the ocean, turtles can live hundreds of years and grow hundreds of pounds. Pet turtles reach their full size by 2 years and are roughly 5 to 11 inches so get a turtle tank that’s at least 40 gallons.

Turtles are slow and have no teeth so how do they hunt? The herbivores eat plants and the omnivores eat mollusks that are equally slow. Some turtles have beaks with sharp jaws that snap to crack shells open. Other turtles have softer lips so they swallow their food whole.

Underwater, turtles don’t have many predators because their shells are too tough. And they’re rarely on land so it’s only hatchlings that are exposed. So turtles don’t need ‘speed’ to hunt. They just sidle up to slow animals. They can lure fish with their tongues and trap them.

If it catches the bird, yes. Snapping turtles grow large and have powerful jaws. They’ve been photographed eating pigeons and even ducks, so don’t let that ambling gait fool you! They opt for slower birds though. So ducklings or dead birds. Turtles sometimes hunt mice as well.

8. How do straws hurt turtles?

Straws have sharp edges so they can pierce a turtle’s organs when they swallow it. Turtles can choke on the plastic. It can block their breathing passages or clog their digestive system.

Jellyfish are among the scariest creatures in the ocean. And yes, some turtles snack on them. Leatherback turtles feed almost exclusively on jellyfish and they can grow to be 1,500lbs.

If you offer fruit to your turtle s/he’ll probably eat it. But the sugar in grapes and their ratio of calcium-phosphorus isn’t the best for reptiles. Keep fruits and flowers in low rotation.

You probably have lots more questions about turtles, but this is a good starting point. Ask the pet store owner if they know what species of turtle you have and if they have specific tips.

If you want an aquatic indoor pet, a smaller turtle is a good choice. You can keep them outdoors in a stock tank or a pond. Either way, provide safe basking spots, the right food for your turtle breed, a filter if you have an aquarium, and adequate swimming space.