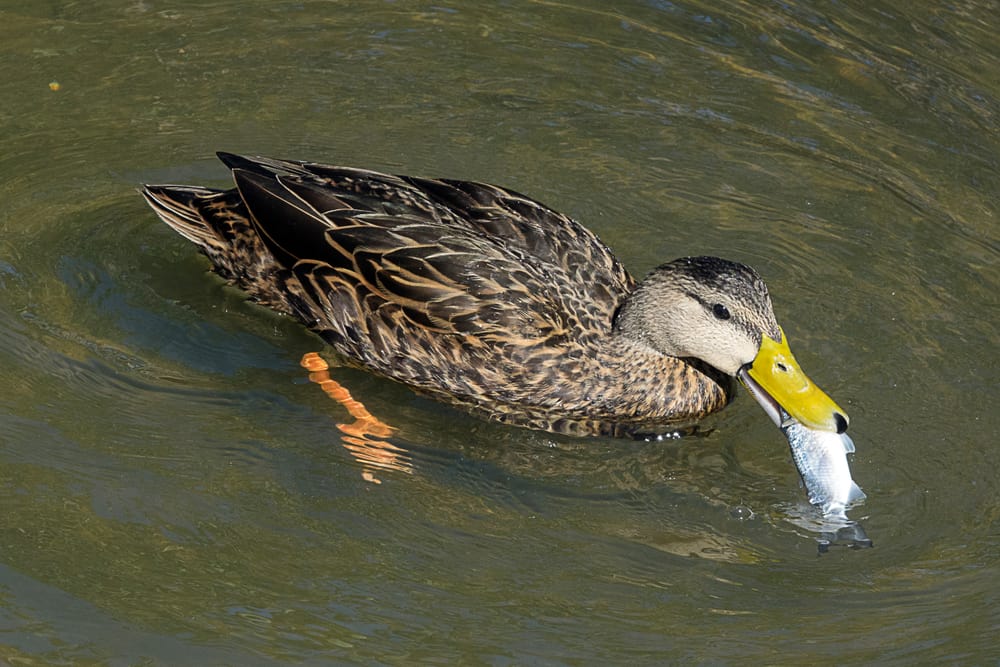 You’ve probably heard bread is bad for ducks. And it probably annoys you anytime someone throws this piece of wisdom at you because you’ve seen how much ducks love breadcrumbs. (It’s a bit like cats and milk.) But what do ducks eat? Join us as we fish and find out!

When you think about ducks, you’re probably picturing the Ducks of Disney. You might even toss in Daffy or Darkwing. But ducks come in various species, including dabbling ducks and diving ducks. Dabbling ducks live in shallow water and hunt by dipping their beaks into the water. Diving ducks – as you’d imagine – submerge themselves and get their tails wet.

Also, drakes observe daylight savings time … in a way. When the sun starts setting earlier, they know it’s mating season. Their organs then start to grow so they can mate more easily. Social dominance plays a role in size and hierarchy. Some even develop … interesting shapes to facilitate copulation. These organs will shrink back to normal size once the season is over.

Unlike many other birds, ducks have wider, flatter, serrated beaks called pectens. When they feed from water bodies, their ‘beak-combs’ help them filter out the water without wasting any food. Wild ducks lay eggs in clutches of eight or nine, laying one per day until they finish. If the duck has pair-bonded (formed a kind of couple), they will stay together for about a year.

A female duck will sit on her eggs for 21 to 31 days. She makes a nest and plucks her belly. This leaves a patch of featherless skin that gives her eggs direct contact with her body. The patch lets her share her body heat more effectively, and she turns her eggs and moves them around the nest so that each of her babies gets the same amount of care and hatching time.

But domestic ducks are more like chicken so they lay infertile eggs all year round. Usually one per day. So what you feed your ducks depends on whether they’re wild birds or commercial flocks. If you’re keeping them for meat and selling their eggs, their diet will be vastly different from the friendly, colorful ones at the neighborhood pond or nearby beach.

Ducks have webbed feet and waterproof feathers to help them swim. Their scientific name is Anatidae. Swans and geese are also considered Anatidae, and there are hundreds of duck species around the world. The common green-headed species is a male mallard. (In the avian world, males are often prettier and more colorful to help them attract willing females.)

You’ll often see ducks pecking in the dirt. So you might assume they like the taste of soil. But they’re more interested in what’s inside the soil. Ducks will scoop mud from puddles and filter the liquid out of their pectens. They’ll retain any worms or grubs hiding in the soil.

On dry land, ducks dip their beaks into the soil looking for insects and tiny rodents. You might also see them eating blades of grass. They seem to enjoy the taste, and it’s a good source of fiber so it improves their digestion. So no, ducks don’t eat dirt. They just fish around for living things.  But they frequently eat sand, rocks, gravel, and small pebbles.

These minute stones help them grind food inside their gizzards and develop healthy eggshells. You can also feed them soluble grit – a commercial mixture of minerals and fine sand. In domestic ducks, providing grit stops the ducks from ingesting potentially harmful stones. 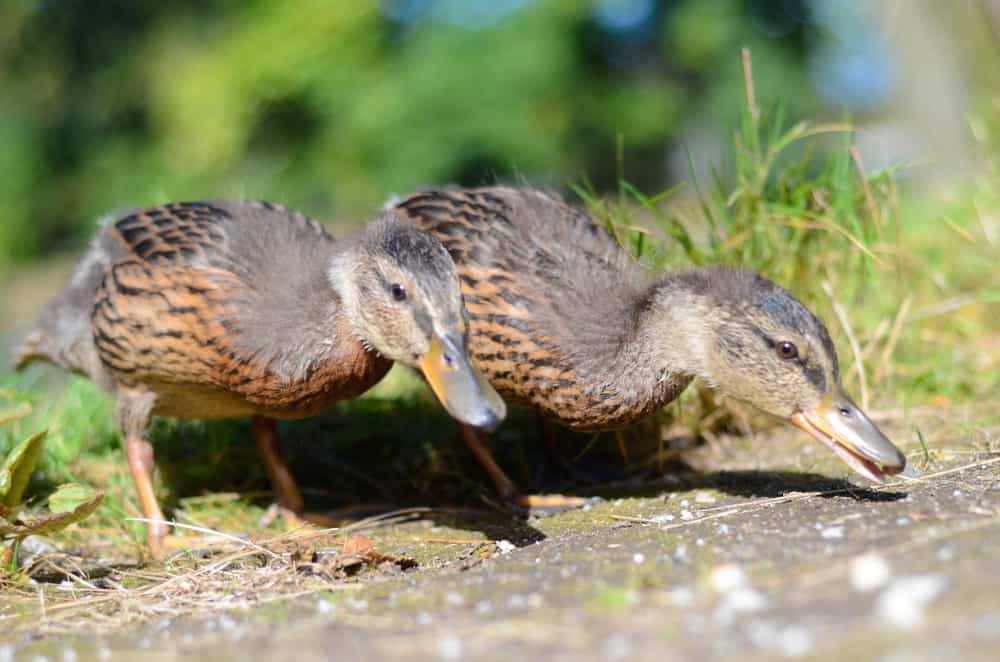 Like squirrels, ducks are omnivorous. They can feast on fruit, seeds, insects, fish, and more. But even with the world as their buffet, ducks have preferences. And if you’re feeding them, you want items they enjoy … but you also want a diet that’s good for them. So what are a duck’s favorite foods? Let’s run through a list of wild, organic, and commercial options.

Wild ducks can fly, swim, and their 3rd eyelid gives them super-powered eyesight. Their 340° field of vision can spot close objects and distant ones simultaneously and in full color. So while they’re efficient at finding their own food, they can easily defer to human feeding and lose their killer instincts. So try to match your feeding patterns with their natural ones.

Foods to Avoid When Feeding Ducks

The reason ducks look fluffier than chickens is the same reason they’re waterproof. Their gland secretes wax that coats and softens their down-feathers, making this ‘undercoat’ a popular source for feathered pillows. And while ducks will eat pretty much anything you give them, you should avoid some of the foods below. Sir Quackalot will thank you for it.

You can usually spot a drake by its bright colors. But many species molt in the summer. At these times, they have dull feathers, just like the girls. So whether you’re feeding them for eggs or meat, match the menu to their species, not their gender. You’re safer that way. 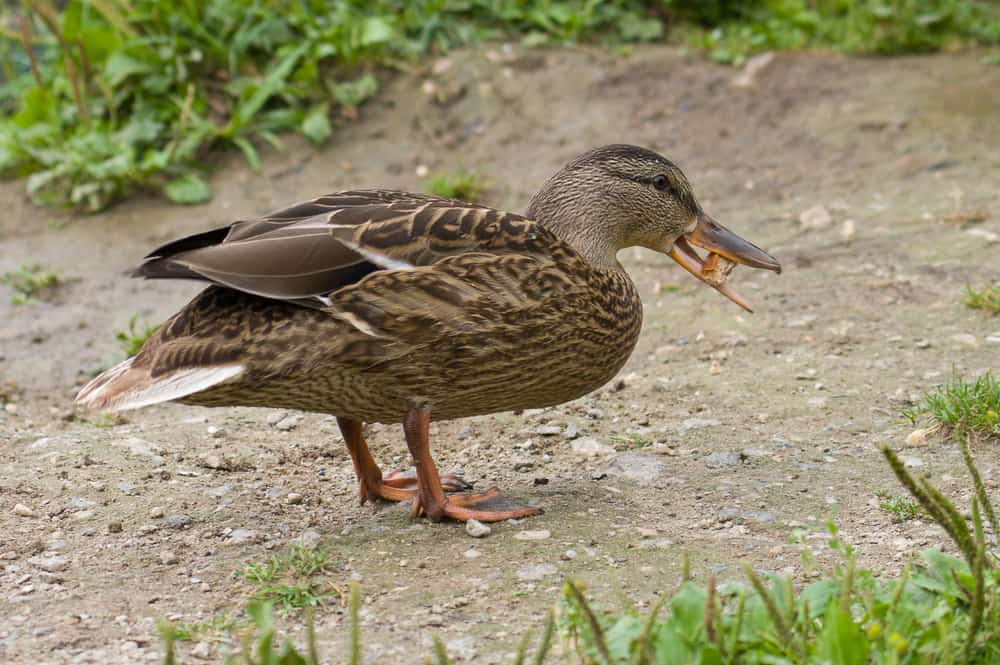 Ducklings learn to swim before they learn how to fly. As soon as they hatch, their mothers guide them to the water for their first lessons. This is probably because there’s more food in the water than in the air – ducks only need to fly when they’re migrating. So here are some tips to consider when you’re feeding ducks, whether it’s a wild flock or a backyard barn.

Ducks can fly as high as a commercial plane. And when they sleep, designated guard ducks ‘patrol’ the edges of the flock, keeping one eye open and half their brain awake. So when you feed them, be careful not to startle them or scare them off. They’re extremely quick and alert. 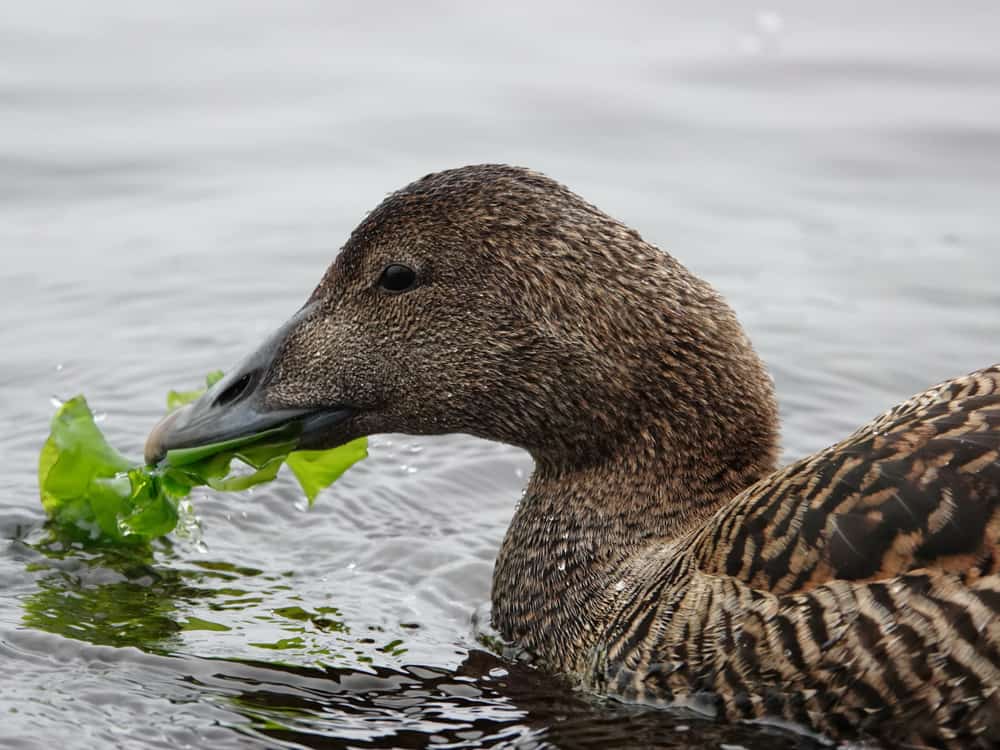 Ducks are the punch line for lots of jokes. Their comical quacks, awkward waddle, and hilarious diving style are quite the crowd-pleaser.

Plus they make great metaphors because they’re waterproof, they swim, they fly, and their feet practically spin underwater. So let’s find the answer to ten common questions about ducks (and their eating habits).

When you domesticate birds, cannibalism is a risk. But ducks rarely attack hatchlings in the same way chickens do. They enjoy fish eggs though so bring on the (low-end) caviar!

Yes, they can. But large grapes might choke wild birds so try cutting the grapes in half (or quarters for larger ones). To be on the safe side, go for seedless grapes.

No, it’s not a gluten thing. Just like humans, ducks love the taste and texture of bread. But it’s all carbs and n nutrients. So the ducks get fat and full so they’ll avoid eating their fish and veggies. And they’ll get used to free bread and stop foraging. Over time, their health suffers.

Yes, it is. Crackers, doughnuts, potato chips, candy, and cereal are all processed foods. They’re high in sugar and additives but low in vitamins and minerals. So the ducks may bulk up, but their bodies will be malnourished, meaning they could fall sick and die.

For domestic ducks, that’s not really a problem. But for wild ducks, over-reliance on humans can threaten their survival, so don’t offer your hands. Also, in both cases, duck pecks hurt.

Check with the park ranger or the local council. Most places are fine with it, as long as you give them healthy food and clean up after yourself. Nobody wants to pick rotting duck food.

It depends on what you mean by meat. Ducks will gladly eat insects, lizards, snails, crayfish, and pond fish. They’ll also dip into pet food bowls and roadkill if they’re hungry enough.

For domestic ducks, your vet can confirm the right amounts of calcium, niacin, and grit. For wild ducks, they’ll balance their diets naturally with algae and shellfish when they need to.

Dried legumes aren’t safe for ducks because they can’t easily digest them. Stick to soft bean sprouts. Ducks are especially fond of peas – fresh or frozen. But always defrost them first.

They do. But if you feel that’s too extravagant for wildfowl, eat the strawberries and save their tops for the ducks. And don’t feed them pre-salted or chocolate-covered-anything!

Ducks are not picky eaters and they never get cold feet (because they have no nerves or glands down there). Your only worry is to protect them from predators and ensure their diet is balanced. Offer seedless fruit, nutritious grains, vegetables, duck pellets, and aquatic feed.