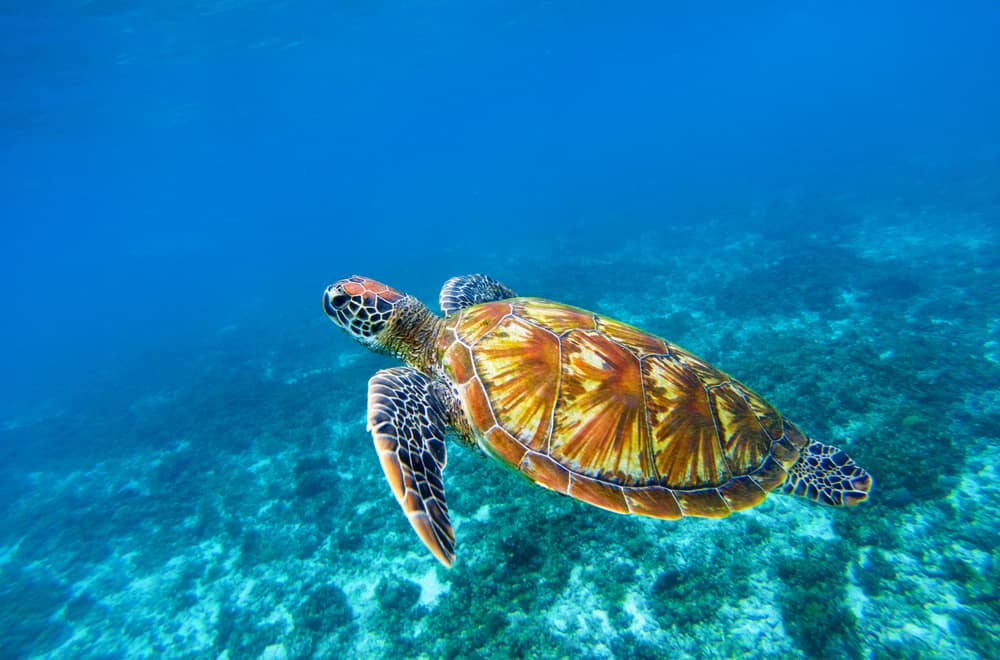 Remember that you can recognize seven Sea turtle species with entirely different diets, so you should find out what do Sea turtles eat before thinking of their feeding.

You can find seven different Sea turtle species in the seas and oceans worldwide. Most adults enjoy lagoons, shallow coastal waters, estuaries, and bays, but some species prefer the open oceans. On the other hand, hatchlings usually choose to spend time in bays.

These turtles also differ in life habits. Some can migrate great distances across the Atlantic or the Pacific Ocean, while others choose to nest and feed in the same area. For instance, the Leatherback Sea turtles sometimes migrate over 3,000 miles (4,800 km) from the nesting beaches.

Since males and hatchlings never come ashore, it is complicated to count these animals. Instead, scientists base their number on adult females nesting ashore.

Unfortunately, this data is not reliable since some females nest only once in two or three years. Others can nest in different beaches or pick out the same beach more than once in a season.

Loggerhead Sea turtles‘ nesting populations decline worldwide, and you can find over 10,000 females only in the US and Australia. Nowadays, only 13,000 of them nest in Australia and 20,000 in Florida.

Green Sea turtles‘ nesting population is unknown, but experts estimate that their number has declined by 48% to 67% in the last century.

Most Leatherback Sea turtles nest in the Eastern and Western Atlantic, Western Pacific, and Indian Oceans, but no one can tell how many of them live in the world. It is estimated that their population declined by over 80%. Nowadays, only 40 females nest annually in Florida.

Since Flatback Sea turtles‘ reproduction is limited, they are the most vulnerable of all turtle species. Scientists estimate that only 25,000 to 30,000 mature females live in the ocean near the Australian coast.

Olive Ridley Sea turtles are the most abundant species worldwide. Each year, you can see 2 million females nesting in mass nesting sites (arribadas), including:

Kemp’s Ridley Sea turtles are considered the most endangered species nowadays, with only 5,000 females recorded in the Gulf of Mexico.

Since Hawksbill Sea turtles nest hidden in beach vegetation, it is tricky to determine their exact number. Their largest nesting population of 6,000 to 8,000 females is recorded in Australia’s Great Barrier Reef. 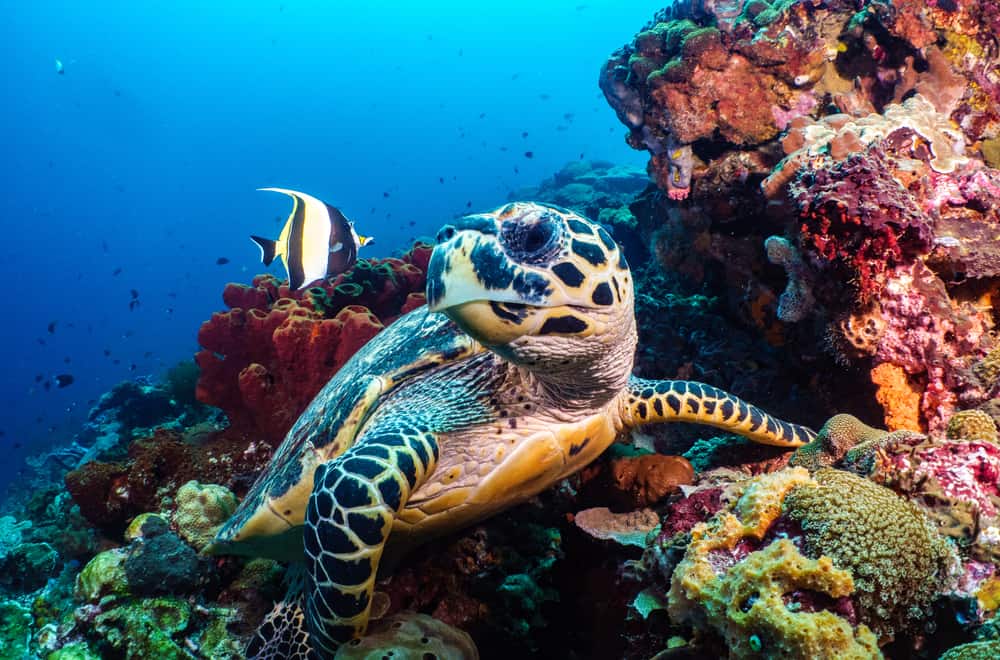 Sea turtles enjoy beach nourishment, but too compacted sand can negatively impact these animals. Not only can it potentially disturb standard nest-site selection, digging, or incubation temperature, but some turtles can ingest it accidentally. Luckily, it is a rare case since these sea creatures have far better taste.

On the other hand, Sea turtles seem to enjoy eating plastic since it reminds them of food like jellyfish or algae. Since the 1940s, when started plastic mass production, 52% of these animals have eaten plastic waste putting themselves in danger. For 22% of turtles, ingesting only one plastic bag or a sharp plastic item is a death sentence.

As I have already mentioned, you can find seven Sea turtle species worldwide, and each one has different dietary habits. Let’s take a look.

While hatchlings are omnivores and equally enjoy both plants and animals, adults are strict carnivores. They prefer consuming:

Their strong jaws allow them to crush even prey with the hardest shells.

Hatchlings are omnivorous that don’t choose too much what to eat. Adult green Sea turtles are herbivores and like eating algae, seaweed, and seagrass growing near coral reefs. Thanks to their finely serrated beak, these turtles can scrape algae off rocks and enjoy their taste effortlessly.

Two sharply pointed cusps on both the upper and lower jaws allow these turtles to pierce jelly creatures and swallow them quickly.

These creatures enjoy various food, including:

These turtles are omnivorous that prefer eating:

Thanks to their bird-like beak, these turtles can access coral reefs cracks and reach tasty sea sponges. Basically, that is the only food they will pick out whenever possible.

Rescued Sea turtles require a specific diet, depending on their species, condition, size, and age. Their feeding should prepare these reptiles for release back into the wild. Therefore, their diet changes over time, based on their specific needs and progress.

Sea turtles with special needs require adjusted feeding methods. For instance, some visually impaired turtles can’t see food, and it is often necessary to use a triangle target and tongs to make them easier to eat.

On the other hand, underweight or wounded turtles need to heal correctly, so daily providing food with more calories is necessary. Rehab turtles require enough: 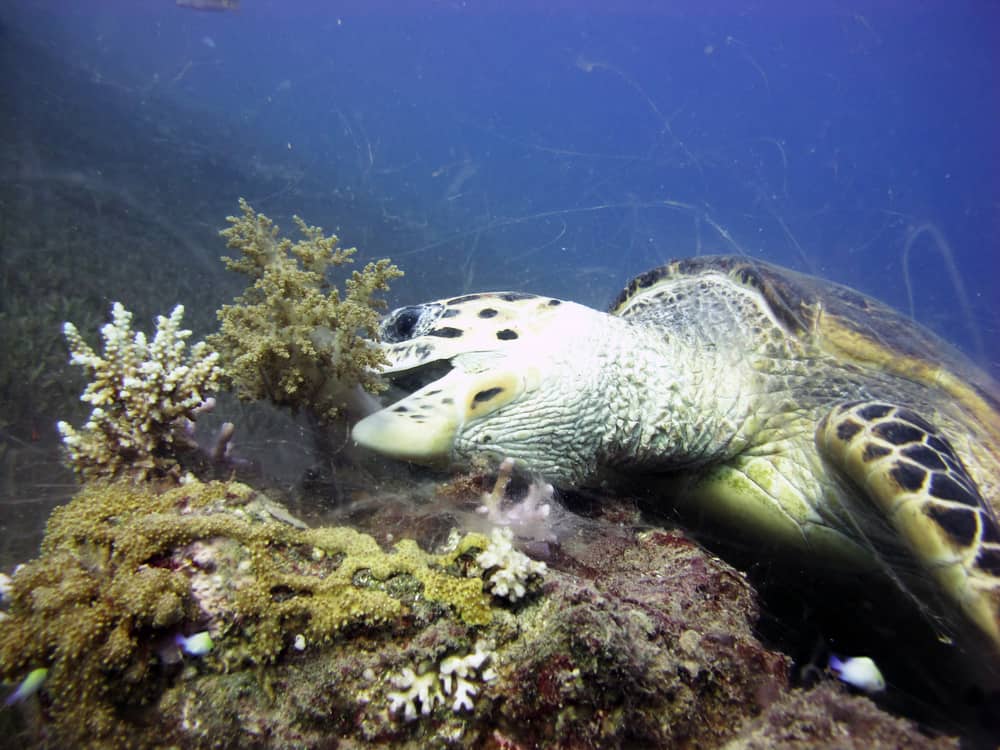 The food type that Sea turtles prefer will depend on their species, size, age, jaw structure, and the sources of food available in their environment. Since six of the seven Sea turtles species are on the list of endangered or threatened animals, it is necessary to provide adequate food for them.

Some turtles prefer meat while others choose plants more often, so you can recognize three turtle types, depending on their diet:

You need to check the turtle species before feeding it since offering the wrong food type can lead to malnutrition and starvation.

Remember that in some species, hatchlings have different dietary needs than adults. Therefore, inadequate food proportions can cause various health issues.

Even though many people believe that Sea turtles eat only jellyfish, it is not true. Their diet depends on the species they belong to.

Since there are seven Sea turtles species in the world, you can expect that the ways of their feeding are entirely different. Therefore, you need to know their habits and respect differences between them if you want to offer some treats to each particular type.

The recommended diets need to be diverse, and they directly affect their own and the ocean and coastal ecosystem’s health. In other words, these reptiles consume various marine species, providing balance in the food chain.

For instance, herbivore Sea turtles are crucial for the coral reefs’ health maintaining. They eat parasitic algae and prevent algae from overgrowing and killing corals.

Sea turtles have keratinous beaks instead of teeth to help them eat. They are not the same, but their structure varies to accommodate each turtle type’s diet. Let’s see.

Loggerhead Sea turtles – Thanks to their strong jaws, these reptiles can effortlessly crush hard-shelled animals.

Leatherbacks Sea turtles – These reptiles use their scissor-like jaws to pierce soft-bodied jellyfish. They are endangered since plastic bags remind them of jellyfish, their favorite food. Unfortunately, consuming plastics often leads to their death.

These impressive creatures migrate from Asia to the US across the Pacific Ocean to find jellyfish swarms off the coasts. It is really a shame that plastic bags kill them after such an effort.

Hawksbill Sea turtles enjoy nibbling sponges with toxic glass-like spines (spicules). They are harmless for this turtle species, but this habit makes their meat poisonous. Their sharp narrow beaks allow reaching inside the reef crevices in search of adequate food.

Sea turtles are magnificent animals that live in all world oceans for thousands of years. You can recognize seven different species with various diet habits. They can be herbivores, omnivores, or carnivores, while some have a specialized diet, depending on their age.