Just as their name suggests, stink bugs stink. If you’ve come across some, I’m sure you are familiar with their pungent smell. These bugs are mostly good for nothing as their only purpose is crop destruction and stinking up your home.

That said, what do stink bugs eat? Let’s check it out.

Stink bugs use their stylets (piercing mouthpart) to obtain their foods. They penetrate plant tissue to extract plant fluids. While sucking out the plant’s juices, stink bugs inject saliva into the plants, which damages the surface of the fruit and rotting the material underneath.

When feeding on corn, stink bugs go through the husks before eating the grain. This approach hides the damage until the removal of the husks during harvesting.

Nearly all stink bugs feed on plants. Their young ones usually feed on weeds and grasses. Upon reaching adulthood, stink bugs often migrate to orchards, fields, and residential environments.

In these areas, they mainly feed on crops, fruits, and even ornamental plants. However, not all species of stink bugs are plant eaters. Some species feed on other insects and also larvae.

Examples of plants attacked by stink bugs include:

Examples of food stink bugs feed on include:

Because predatory stink bugs feed on other pests, some people consider them beneficial. But like all other stink bugs, during winter, they’ll still invade households. 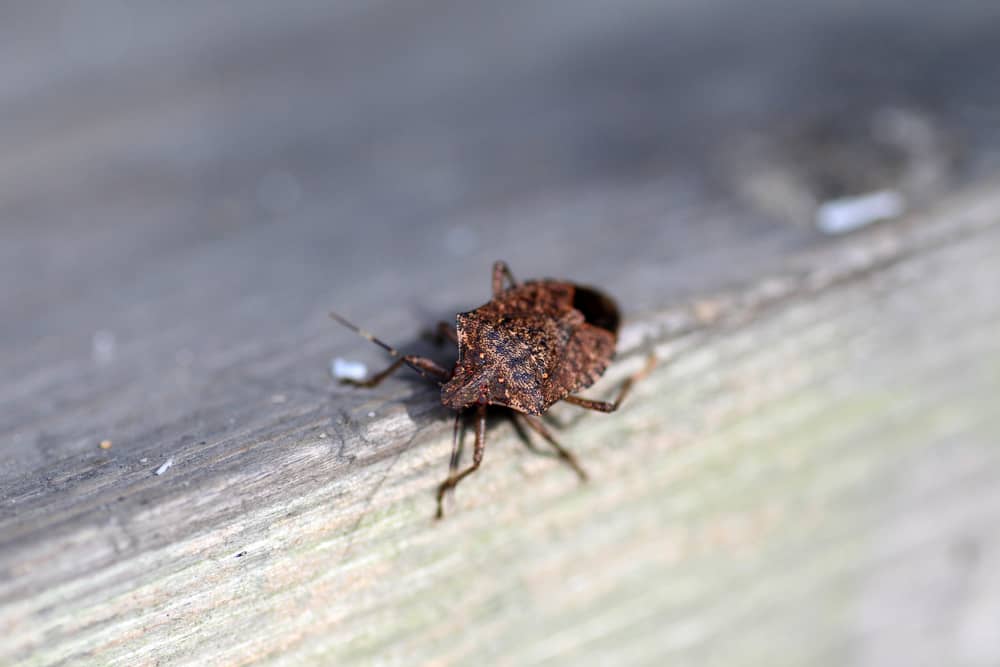 Stink bugs do not harm human beings whatsoever. They neither bite humans nor pets, and neither do they spread disease.

Some people, however, can be allergic to the stink bug’s secretions. Allergic reactions may include a runny nose and dermatitis if you come in contact with a crushed bug. Dermatitis is inflammation of the skin that causes red rashes, dry skin, and itchiness.

Stink bugs will creep through any opening found in your house and find a suitable place to nest during winter. During these times, they don’t eat.

Stink bugs cause significant damage to a vast range of vegetable crops when feeding on the plant’s fruits using their stylets. The fruits usually are the marketable portion of the crop.

Damage inflicted on fruits like peppers and tomatoes results in spongy areas on the skin and damages the fruit internally. The harm caused to the crop reduces its yield and quality. Moreover, the stylets of the stink bugs also transmit bacteria that cause the fruit to rot.

As previously mentioned, stink bugs also invade orchards where they primarily target fruits like apples and pears. The stink bug may cause the fruit to abort (detach) from the plant prematurely.

When the bugs feed on citrus fruits (e.g., grapes), the droppings produced may produce an unpleasant taste to the berries.

Fruits such as peaches may develop scarring and dimpling in a pitted or what is known as a cat-faced appearance. Seeds in the soybean pod may be deformed, discolored, or withered after harvesting.

In ornamental flowers such as cypress, cedar, hibiscus, paulownia, and celosia are attacked by stink bugs.

The bark is discolored when the stink bug sucks on the sap. This behavior, in turn, allows other insects like wasps and ants to feed on the sugary liquids that ooze out the bark.

Continuous feeding of the ornamental tree by the stink bugs and other insects eventually leads to permanent damage. Hence the tree withers away.

Aside from invading orchards and plantations, stink bugs also invade homes during the winter seasons. During this time, they are less active and are looking to pass the time until the cold season ends.

Tips To Get Rid Of Stink Bugs

During the winter season, stink bugs search for warmer living conditions. Unfortunately, this search ends when they find a way into your house. Once they’re in, it only gets worse as more tend to follow. The upside to this situation is that they don’t bite, eat or reproduce indoors. The downside is that they can be a nuisance.

So, how do you deal with a stink bug infestation indoors? Here are some pointers:

Once temperatures rise in spring, stink bugs come out from their hiding places. They make their way back into the open to feed and mate. Your garden may be the ideal place to do so.

Although keeping them from your garden might seem challenging, you can use specific methods to eliminate them effectively. Here are tips that will help you out:

These are but a few methods you can use to keep your house free from stink bugs. Also, by following some of these steps, you help rid your garden of these pesky pests.

Do stink bugs serve any purpose?

Some species of stink bugs are predators, and they help shield crops against harmful pests. They prey on beetles, caterpillars, and plant-feeding stink bugs.

Are stink bugs active at night?

Stink bugs primarily enter houses during the day. However, at night, light attracts them and is often used to trap them. You can use a lamp to lure them back outside or to their death.

How do you know you stink bugs have invaded your house?

When stink bugs invade your house, they tend to congregate in large numbers on the warmer sunny sides of your home. There may be a terrible smell coming from one end of your house. Another sign of an infestation is by observing surrounding vegetation.

As stink bugs are agricultural pests, you will notice damage to your fruit tree and vegetable plants.

Knowing what stink bugs eat, you should put what you’ve learned into action to prevent a home invasion. Seal all openings in your house and repair any cracks to keep these critters away.

Remember to clear or trim bushes that act as hiding places. By doing so, you safeguard your home against a potential stink bug infestation.