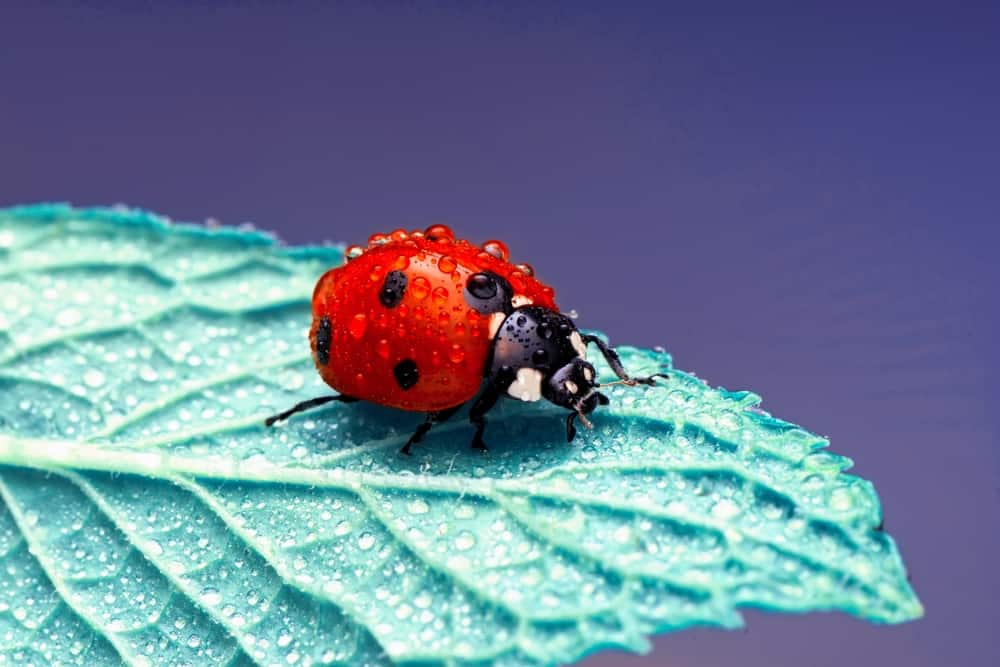 Ladybugs have long been revered as cute and lucky creatures, but where does their symbolism come from?

Known to represent a healthy garden, good fortune, and even health, ladybugs symbolize a wide range of positive aspects across the world.

In this article, we’ll cover what ladybugs represent in different cultures, religions, mythology, and folklore. 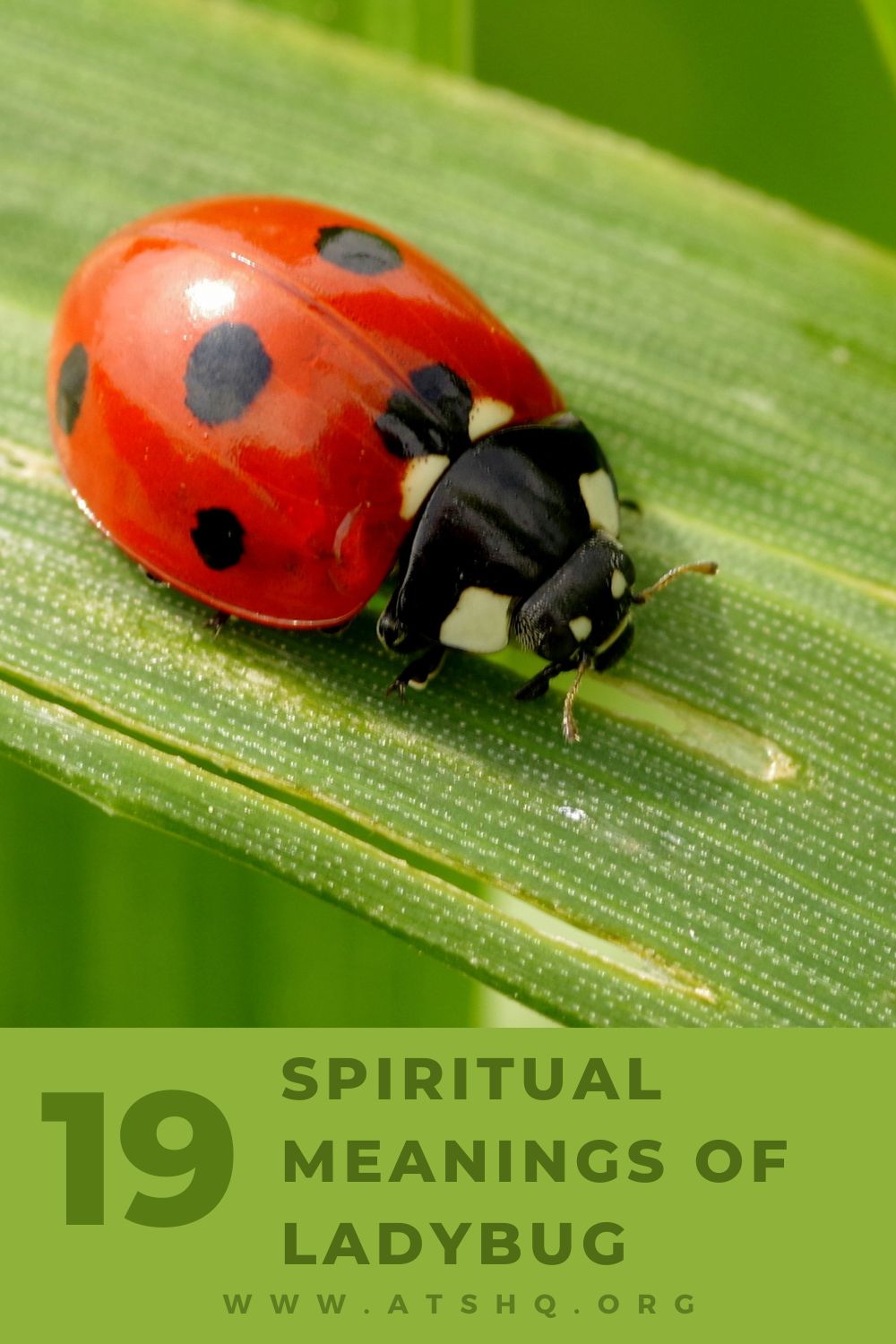 1. The General Symbolism of Ladybugs

Ladybugs have always represented positive attributes or events. Starting from the origin of the ladybug name, let’s learn how and why ladybugs can represent good luck, gardening, prosperity, and wish granting.

1. The Origin of the Ladybug Name

Ladybugs also called lady beetles or ladybird beetles, are primarily found in Europe and North America. Their peculiar name was invented by European farmers many centuries ago.

The farmers were plagued by insects – potentially aphid pests – that were destroying their crops. They prayed to the Virgin Mary for help and suddenly began to see small red and black insects which ate the plague, saving the crops.

The farmers decided to name these insects “beetle of Our Lady”, which transformed over the years into lady beetle and, then, ladybug.

2. Ladybugs as a Symbol of Good Luck

Stemming from the ladybug name origin, these insects have always symbolized good luck. Whether you see a ladybug, it enters your home, or it lands on you, you can say that you’ll have good luck due to this interaction.

On the contrary, killing a ladybug would bring you bad luck. This is frowned upon in many cultures and seen as an insult to nature and an attack on innocence, as ladybugs are peaceful creatures that typically help humans, especially in agriculture.

3. Ladybugs as a Symbol of Prosperity

Ladybugs tend to appear in the spring, making them an excellent representation of prosperity. Spring is when flowers bloom, crops spring up, and life begins to accelerate after the frozen winter. Farmers even look for large swarms of ladybugs in the spring as a sign of a prosperous harvest later that year.

4. Ladybugs as a Symbol for Granting a Wish

An old saying goes that if you get a hold of a ladybug, you should make a wish. Then, when the ladybug flies away, take note of the direction it goes. This will be the direction your good luck – and potentially the answer to your wish – will come from.

2. The Cultural Symbolism of Ladybugs

Across both land and time ladybugs have become an important part of different cultures, events, and celebrations. Let’s take a look at their importance in Italian, French, Korean, Native American, and Celtic cultures.

In some areas of Italy, this bug is also called boarina del Signor, or shepherdess of Christ.

In France, ladybugs are seen as symbols of healing. If one lands on you, you’re considered to be lucky, as the ladybug will fly away and take any disease or illness away from you.

Ladybugs in Korea are called mundang beollae, which translates to shaman beetle. A shaman is a person who has access to the worlds of good and evil spirits. They often perform divine rituals and practice healing.

The origin of the ladybug’s name in Korean isn’t known. Their color could represent the shaman’s typical dress or they may symbolize a connection to the spirit world.

Beetles for the Navajo are associated with fertility, whereas the Hopi tribe sees beetles as the origin of the first rain dance.

5. Ladybug Symbolism for the Celtics

The Celts were a group of people from the 18th century that spoke the Celtic language, primarily in Wales. This group has a strong respect for the color red, which is the most popular color in Celtic tales.

In these stories, creatures from the “otherworld” are red, black, and white. Ladybugs contain these three colors and are therefore associated with the Celtic otherworld as well. We can take this to symbolize mystery, the passage between worlds, and the occult.

3. The Symbolism of Ladybugs in Religion 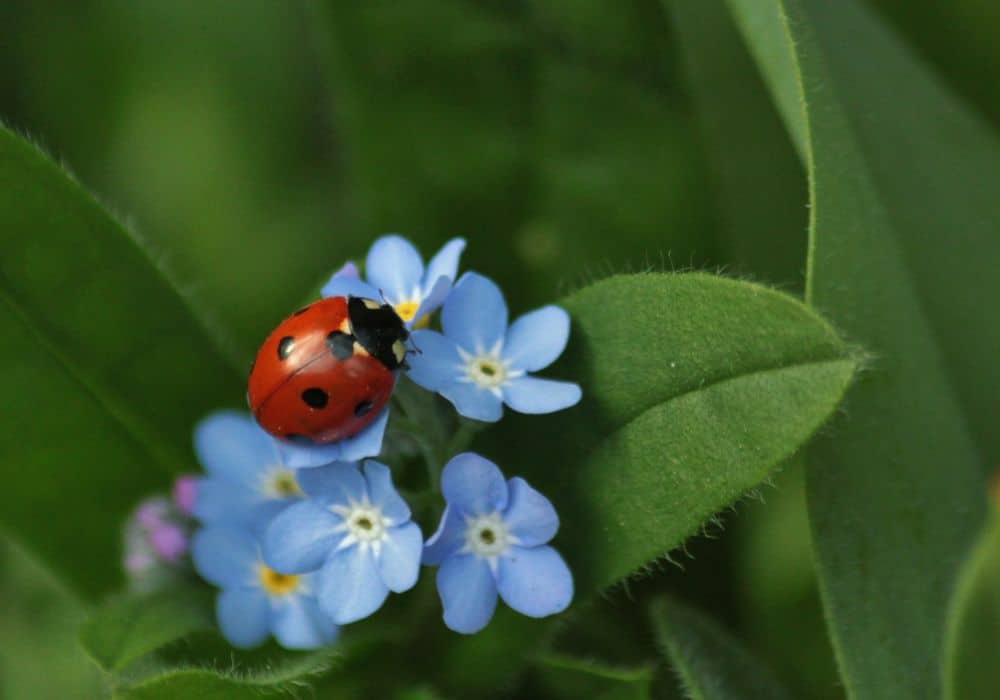 Ladybugs can be found in Christian, Jewish, and Hindu references.

As mentioned, ladybugs were originally named after “Our Lady” the Virgin Mary. This was the saint that farmers prayed to when dealing with a plague on their crops.  The red wings of the beetles are seen as representative of Mary’s cloak, while its spots represent moments of happiness and sorrow in her life.

From this story, you can also see ladybugs as a representation of God’s protection during moments of difficulties.

The Hebrew name for ladybug is parat Moshe Rabbeinu, which roughly translates to Moses’ cow. The connection of religious features and animal nouns to create animal names is common in Judaism. In this case, we can see ladybugs as symbols of the messiah or Moses from the Jewish religion.

Hindus see ladybugs as sacred and lucky. They are seen as the animal of the Hindu god Indra. Indra is the god of lightning, rains, thunder, the gods, and heaven.

In Sanskrit, the beetle’s name is translated to Indra’s Shepherd.

4. The Symbolism of Ladybugs in Mythology 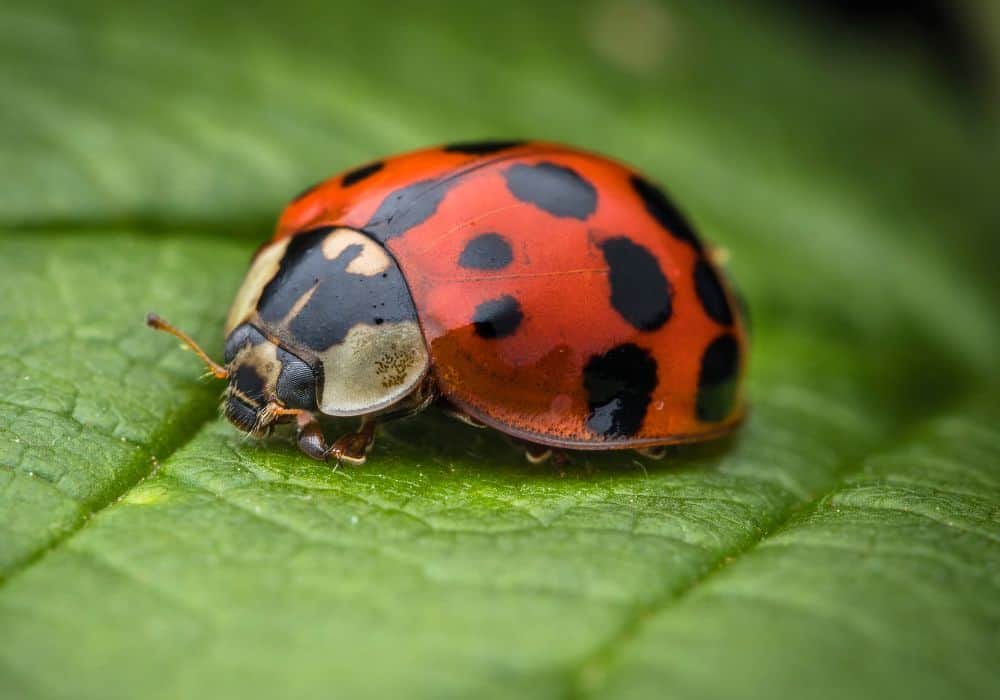 Mythology is a collection of myths and stories, usually stemming from a specific group of people or religions. Ladybugs are mentioned specifically in Norse mythology.

Norse traditions name the ladybug Freyjuhaena, or Freyja’s Bird. Ladybugs in this myth were first sent to earth on Thor’s lightning bolts and were connected to Freya, the goddess of love, fertility, spring, abundance, beauty, and desire.

5. The Symbolism of Ladybugs in Folklore

Folklore includes beliefs, stories, songs, customs, and other traditions of a certain community. Ladybugs are used as symbols in different folklore across the world.

One famous European poem about ladybugs says the following:

Your house is on fire and your children are gone.

All but one and her name is Ann,

And she crept under the pudding pan.

This ominous poem was a warning to the ladybugs of the fields in Medieval England. In those times, farmers had torches set near the old vines after harvests. Sometimes these torches would cause massive fires.

While the ladybugs could fly away, their children – the pupae that were attached to leaves or branches completing metamorphosis – could not, and would die in the flames.

Another poem with an unknown origin talks about the ladybug’s positive effects on agriculture and gardening:

Ladybugs on the flowers

Ladybugs on the corn

Ladybugs on the leaves

Ladybugs on the lawn

Ladybugs in my garden

As hungry as can be

Eating up the aphids

So something’s left for me

There are many famous legends when it comes to ladybugs in folklore.

6. The Spiritual Symbolism of Ladybugs 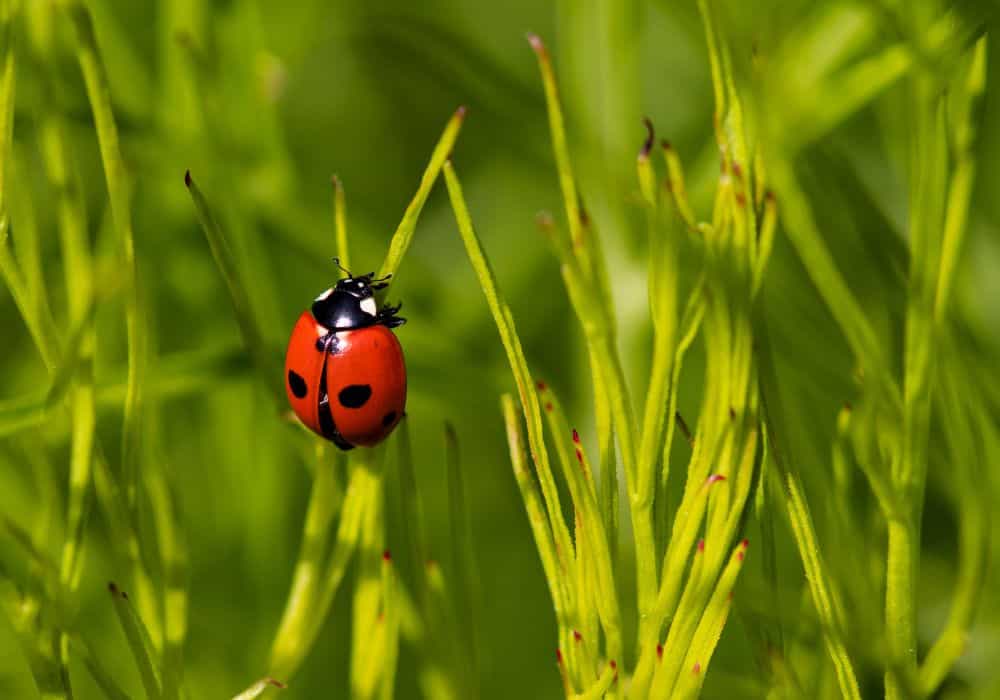 The spiritual meaning of ladybugs depends on your personal beliefs and situation; however, many agree with what these insects could represent in dreams or as an omen, totem animal, or spirit animal.

If you dream about a ladybug, you may be nearing some positive news or good fortune in your life. Think of the ladybug as a new opportunity that you should be ready to seize when the time comes.

Ladybugs can also represent transformation. They begin their lives as eggs before transforming into black larvae – a form most people would never guess is a ladybug in the making.

Once it has grown enough, the larva will attach itself to a leaf or branch and complete metamorphosis into its beautiful adult form.

Finally, you might turn to numerology if you notice the number of spots the ladybug has in your dream. This number could be significant or represent a quantity or situation you’re facing or will face. For example, it could represent how much money you may make, how many children you will have, or the months of good fortune that await you.

Totem animals serve as the emblem of a person or group of people. Normally, they are connected to your ancestry.

A ladybug totem animal is connected to patience, ambition, and success. It represents staying focused on your goals and attracting the right outcomes so long as your intentions are good.

If you have a ladybug as your totem animal, you may want to carefully visualize and plan your future. Avoid feeling lost or unguided, as a clear sense of direction will help you take the steps you need to reach your destiny.

Some people interchange having a totem animal with having a spirit animal.  While they may be used in similar conversations, spirit animals are spirits within a creature that help guide a person with similar characteristics.

While luck is only a part of it, the calm and enjoyable demeanor of the ladybug will reflect in the human it guides. Those with a ladybug spirit animal will be emotional, special, and intuitive. This person may be compassionate with others, going with the flow and being down-to-earth for their friends and family.

If you have ladybug encounters, you could also take them as an omen of things to come. An omen is an event with the prophetic significance of good or evil.

Typically, a ladybug landing on you or entering your home is a good omen and a sign of good luck; however, if you come across one or many dead ladybugs the opposite could also be true.

If you form part of a couple or are contemplating having children, this may also be an omen that your family is going to grow. Count the spots on the ladybug for more information on how many children you may have or how many months it will take for you to conceive.

If you’re planning on getting or already have a ladybug tattoo, you may want to consider these ladybug meanings and the potential associations behind them:

Ladybugs have long been hailed as lucky creatures, and even the origin of their name comes from a time when they saved humans from famine. Cultures across the world see ladybugs as symbols of fortune, prosperity, and peace.

No matter where you’re from, killing a ladybug is surely frowned upon. You may even relate to this insect so much that you see it as your totem or spirit animal. Filled with positivity, the ladybug remains a constant representation of the force of good.