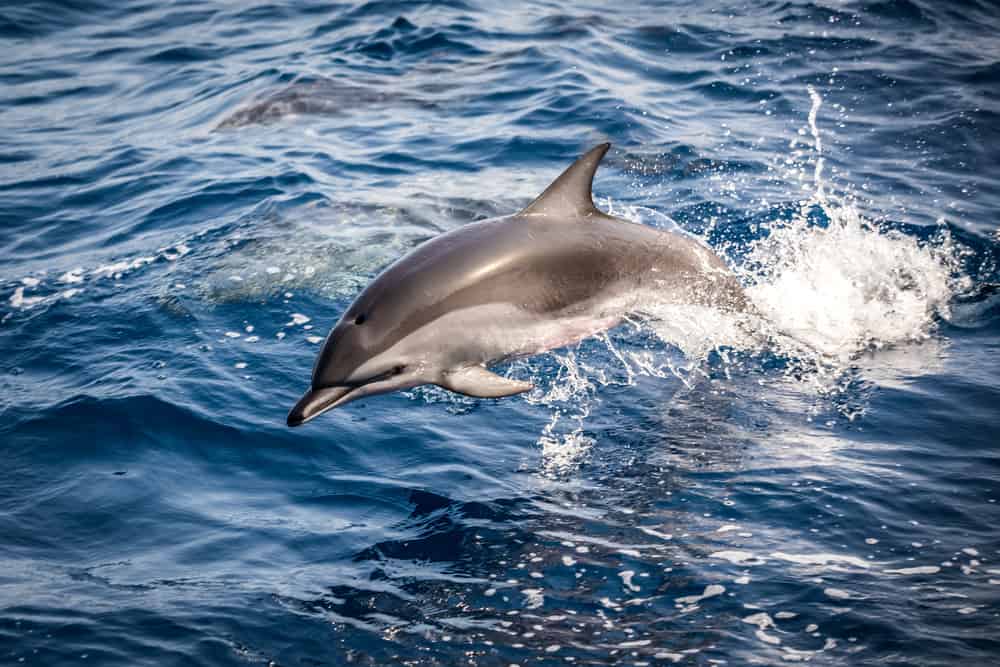 In the Adult Swim TV show Rick & Morty, an allusion is made to a point in the future when humans have gone extinct and the dolphin ‘people’ have taken over. But is this just science fiction gone wild, or is there some merit to imagining a future full of hyper-intelligent dolphins?

In this article, we’ll dive into all things dolphins: from a look at their evolution, intellectual capabilities and conservation status, to their role as a dolphin spirit animal, animal totem, and symbol in mythology and folklore from Ancient Greece to Native America. 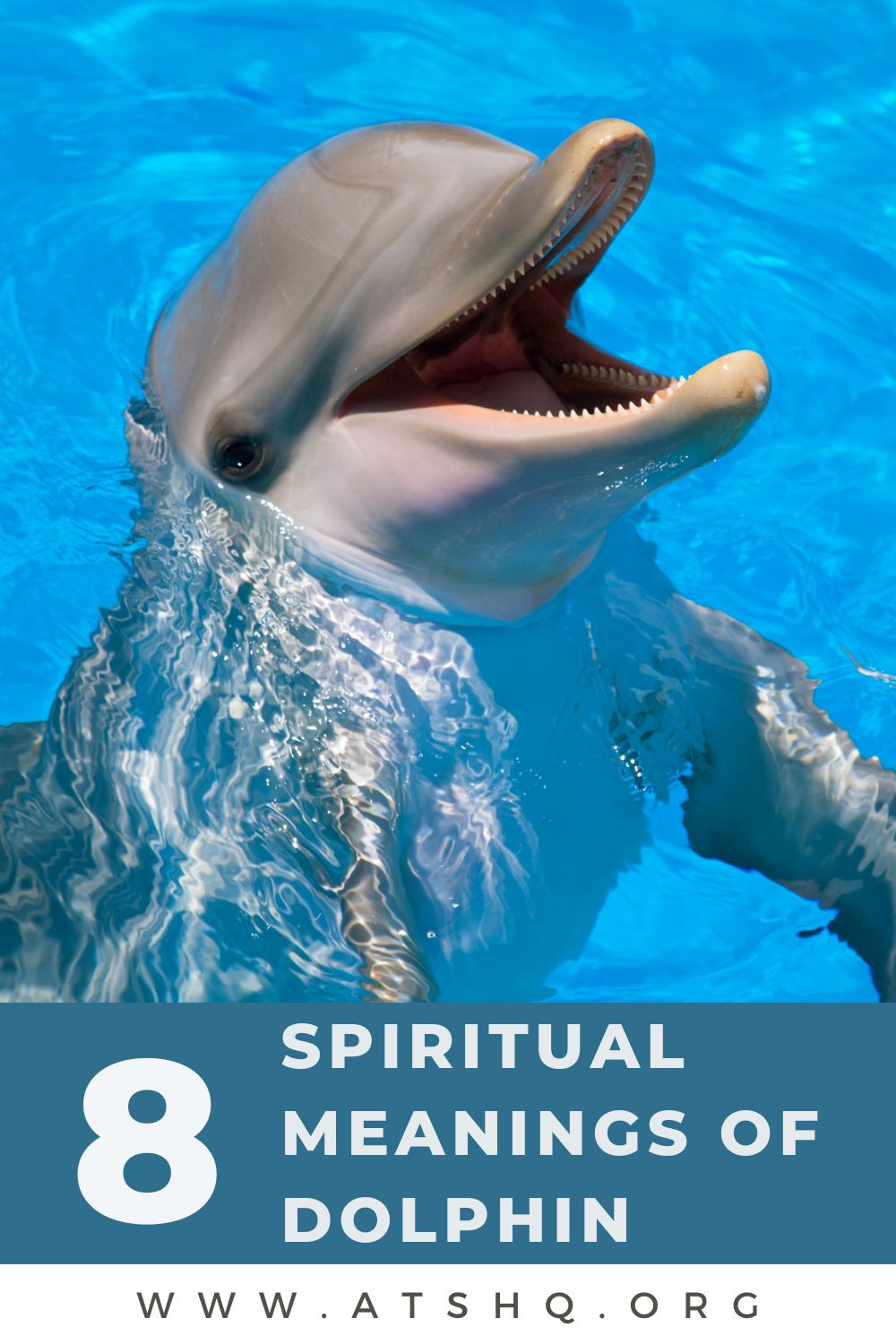 Dolphins are aquatic mammals found all over the world, from the cold waters of the north and south to the balmy tropics and warm climes of the Mediterranean and Caribbean. They are found in rivers, seas and oceans, and have developed a more-than-special relationship with humans over the millennia.

These creatures are specially-adapted to the sea, but with the ability to hear and see both above and below water. They have torpedo-shaped bodies and bulbous heads with limbs adapted as flippers, a tail fin, long snouts with a single row of razor-sharp teeth (like those of sharks), and eyes on the side of their heads.

Dolphins are highly communicative animals (as we’ll come to find out more about in a moment), which use a series of ‘clicks’ for echo location. Their anatomy has evolved very intricately for this precise function, so much so that dolphins have been known to survive in the wild even if blind.

There are currently 40 species of dolphins surviving either in the wild or in captivity, though there were once many, many more. Some aquatic mammals commonly thought of as whales – such as the killer whale, or orca – are in fact dolphins.

We know that dolphins are incredibly intelligent.

Thanks to many decades (nay, centuries!) of study and human fascination with the family Delphinidae, we know that dolphins can use teamwork to solve puzzles, communicate complex concepts, understand emotion and need in other non-dolphin species (like humans), obey instruction and respond to visual and auditory stimuli with trained behaviors.

Perhaps most interestingly, we also know that dolphins are some of the only animals which apparently have sex for pleasure. This playfulness is exhibited elsewhere, too, in games played by young dolphins (such as tag, and wave surfing) and adults alike.

Dolphins are so intelligent that in much mythology and folklore, as well as modern symbolism, they play a highly-revered role.

Tragically, the dolphin family Delphinidae is one of the most endangered of all animal families on earth right now.

Pollution by plastics, dolphin hunting by the Japanese and Chinese (among others), habitat destruction and overfishing (dolphins are often accidentally caught in nets and drowned, or injured by fishing vessels), all continue to put many species of dolphin at risk of extinction.

In the wild, dolphins are also naturally at risk of predation from some of the larger shark species. Today, the Amazon river dolphin is one of the species most at risk of extinction, with species like Baiji, the Yangtze dolphin already functionally extinct. 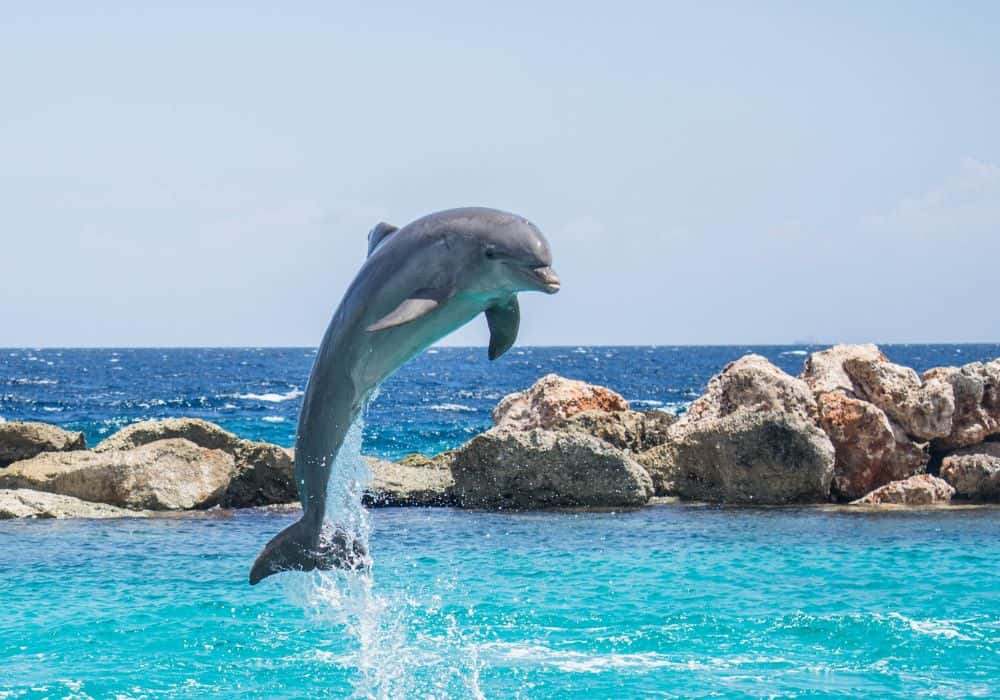 For as long as humans have been around, we’ve been making up stories about the virtue and courage of these magical sea creatures. As tribes or civilizations, we’ve interacted with dolphins as food, medicine, gods and deities, or as water spirits sent to us for guidance.

Now it’s time to take a look at dolphins as beings of the spirit world, and what their place in mythology – as well as in real-life accounts of quite staggering feats – means to humanity.

1. Tales of dolphins as helpers

Roman writer and historian Pliny the Elder tells many tales of dolphins, some mythical and some apparently true. In one of these true stories, a dolphin living in the saltwater Lucrine Lake was fed everyday by a boy walking around the lake to school. The dolphin, in exchange for bread, would carry the boy on its back across the lake to and from school every day. When the boy died of an illness, the dolphin was said to have died from sorrow a few days later.

Throughout much of human history, those who lived on the sea or by the coast spoke of how dolphins seemed to know when human beings were in trouble. Whenever a lone fisherman would find himself lost at sea, or a child started drowning offshore, or if a merchant’s vessel found itself in dangerously-shallow waters, there would be the chance that a dolphin (or pod of dolphins) would come to the rescue.

Accurate or not, there have been far too many (truly countless) stories of dolphins helping people – often by saving them from drowning – to ignore the reality: dolphins are protectors and saviors of humankind. The US military even trains dolphins to help find or rescue trapped or drowning soldiers.

As recently as the mid-2000s, we have a score of stories of sailors, scuba divers, and surfers who suddenly found themselves either shipwrecked or attacked by sharks, only to be rescued in the nick of time by a pod of dolphins who either drew the attention of rescue boats tot he drowning humans, or encircled the humans to protect them from the sharks.

No wonder the sight of a dolphin is often associated with healing, harmony, rebirth, reincarnation and that of a helpful spirit guide. It’s for this reason that if you have a dolphin dream, you are likely processing the recent memory of someone helping you out of a tricky (or even life-threatening) situation.

A dolphin dream of extreme vividness may even presage events yet to come. Perhaps it will be you who is the savior to a friend, sibling, parent or colleague.

2. A good omen for sailors 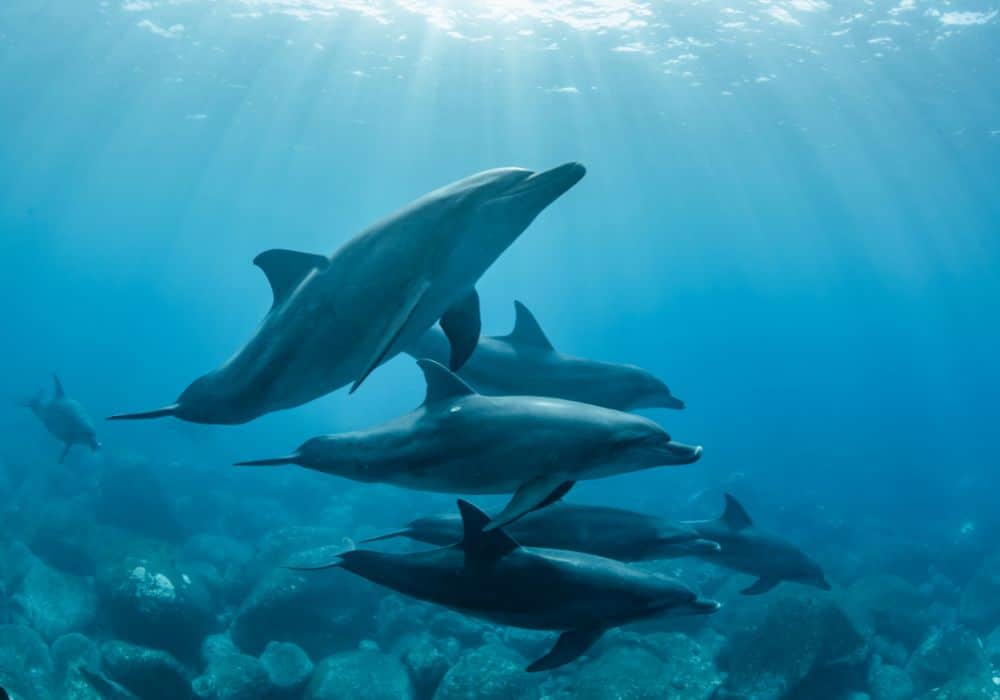 In a similar vein to dolphins rescuing the drowning, or warding off sharks from vulnerable humans lost at sea, the appearance of pods of dolphins close to a ship has always been deemed a sign of good luck.

This isn’t a product of sailors’ superstition, however. Dolphins are expert swimmers and navigators, using their echolocation to draw a mental map of the sea floor, as well as any obstacles lying ahead. Thus, a pod of dolphins by one’s boat indicated that the waters were deep enough to sail in, and the weather was to be fine.

There have been numerous stories of sailors using their intuition and following pods of dolphins to safe harbour, or through treacherous stretches of coastal waters (such as with Perilous Jack in Tasmania of the 19th Century) to safety.

Think about it, dolphins literally use sonar to navigate. By the luck of evolution, they have been endowed with extremely capable sonar systems. So sensitive are they to soundwaves from their clicks bouncing off objects that they can effectively map out the changing geography beneath the waves in real-time.

Having dolphins swimming by your boat, therefore, meant that you absolutely knew the area you were sailing in was safe. And if you weren’t sure about the reef, or depth of seabed, and dolphins veered off course, then you might think to follow them – thus saving not only your own life, but the life of your crew.

In India, the River Ganges is considered sacred and holy by the dominant religion there: Hinduism. For that reason, it is considered beneficial to bathe and wash one’s clothes in the waters of the Ganges.

But in the Ganges also lives another: the Ganges River dolphin. This river dolphin has long been associated with Ganga, the goddess of the holy river, and is in Hindu mythology deemed to be Goddess Ganga’s vahana (mythical mount) the Makara.

Unfortunately, today the Ganges River dolphin is listed as ‘Endangered’ by the IUCN. Studies show there are less than 3,500 of these dolphins left alive in the wild. The Indian government is attempting to promote dolphin conservation by invoking the ancient Hindu texts, and references to the holiness of dolphins mentioned above. 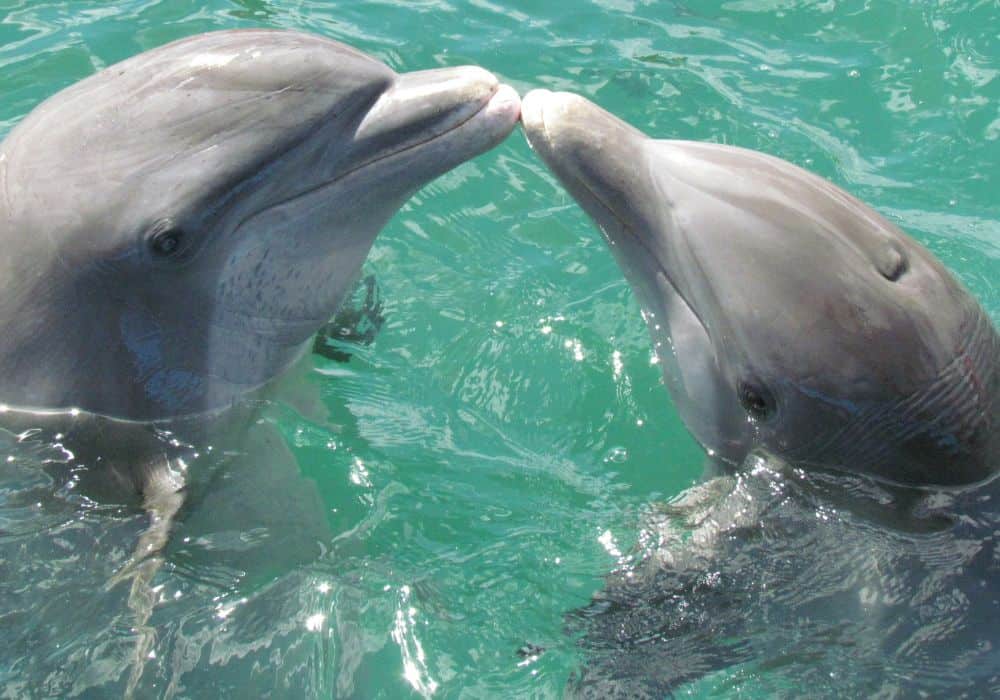 Dolphins feature prominently and frequently in Ancient Greek mythology. They were the sea god Poseidon’s divine messengers, and helpers of humankind. The Greeks were always happy to see dolphins, because they were signs of positive things like fair weather and safe passage at sea.

In one Greek myth, the god Dionysus was taken captive by a group of Etruscan pirates. Using his divine powers, Dionysus scared the pirates into jumping overboard, where he then transformed them into dolphins so that they might spend the rest of their lives aiding (rather than menacing) other sailors and seamen.

The Greek gods Aphrodite and Apollo considered dolphins sacred, and Aphrodite was often depicted alongside them.

Orcas, though named ‘killer whales’, are in fact dolphins (the largest dolphins on earth).

Some, like the Tlingit, even forsook hunting them for this reason. They were deemed, for obvious reasons, symbols of strength and power – so much so that sighting one was deemed a very serious and important omen.

To the Kwakwa̱ka̱ʼwakw (or Kwakiutl) First Nations people of Vancouver and British Columbia, Canada, they believed that the souls of their dead marine hunters would return as killer whales. As such, killing an orca required special rituals to ensure its soul could then once more be reborn as a human.

For the ancient Celts, living on the turbulent shores of the Atlantic in places like modern-day Ireland, Scotland, and Wales, dolphins were symbols of good luck and prosperity. Sighting a pod of dolphins indicated the arrival (or at least the approach) of good weather and the passing of a storm. A large pod of dolphins meant sizeable fishing grounds, which was always a good sign to people who lived largely off what they could hunt and fish from shore and sea.

5. The Dolphin of France 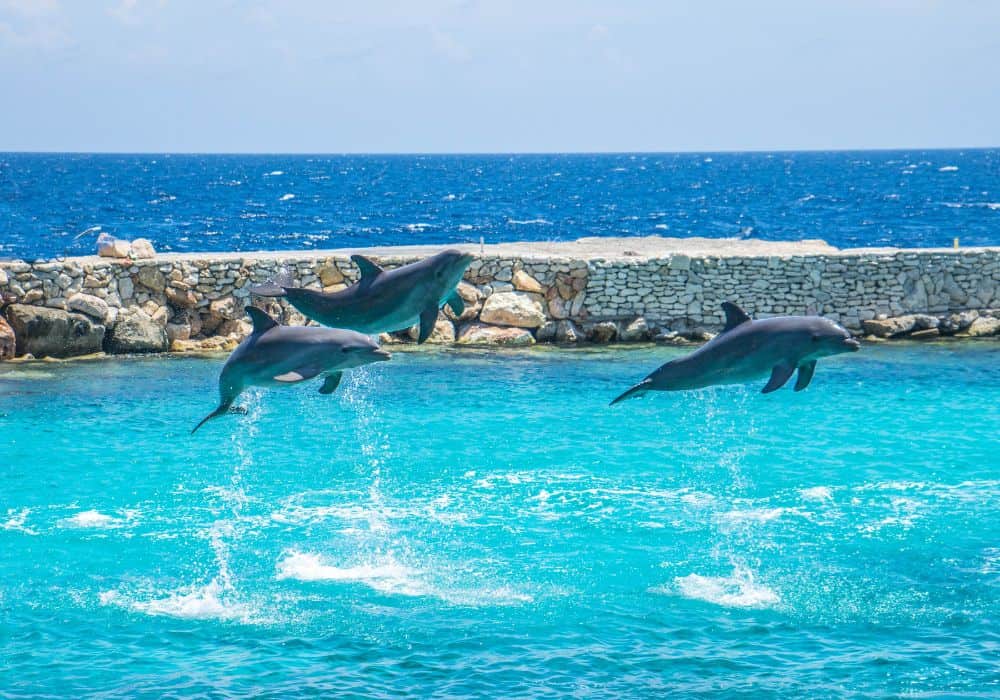 The title given to the heir apparent to the French throne for much of French history was the ‘Dauphin’, which quite literally means ‘The Dolphin’. Thus, the French prince first in line to the throne was always known as ‘The Dolphin of France.’ His heraldry featured two dolphins beside two Fleur de Lys (fictional flowers reserved for use exclusively by the French monarchy and, interestingly, Jehanne d’Arc).

6. Baiji, Goddess of the Yangtze River

And yet, in the times before industrialization and the pollution which has accompanied it, baiji – as it was known – was a dolphin totem animal to the local Chinese; one which acted as a reminder of the story of a young girl preyed upon by a sleazy step-father, who was saved by diving into the Yangtze and transforming into a dolphin.

Until its extinction, baiji was considered a protector of fisherman and ‘The Goddess of the Yangtze’.

If ever you find yourself lost at sea or straying into treacherous waters, cast your mind back to the humble dolphin: a wildly intelligent, playful and compassionate creature whose ancestors decided they’d had enough of land.

Throughout human history, these gentle giants have quietly guided sailors to safety, protected the drowning and warded off hungry sharks from vulnerable people.

They love to laugh, live in big communities, and are always looking for ways to help the animals around them.

Perhaps we could learn a thing or two from the dolphin; perhaps, after all they’ve done to protect us, we should start trying to better protect them…