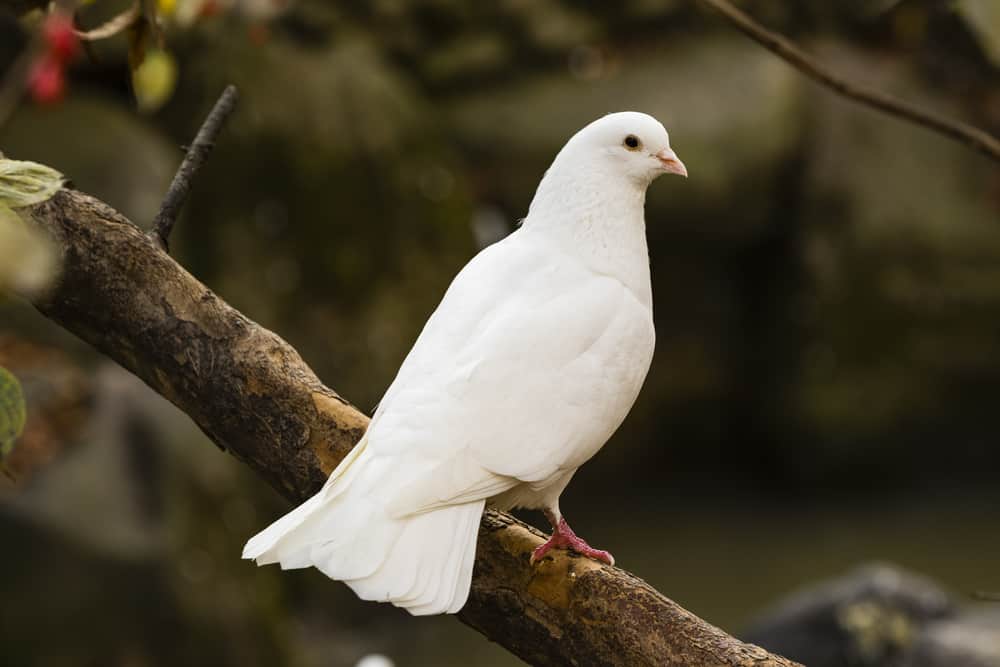 Doves are easily identifiable birds due to their white color and gentle demeanor. Not only that, but they’re represented in different religions, cultures, and even military groups as symbols of peace, love, faith, and freedom.

Today we’re breaking down the symbolism of doves and all they stand for. 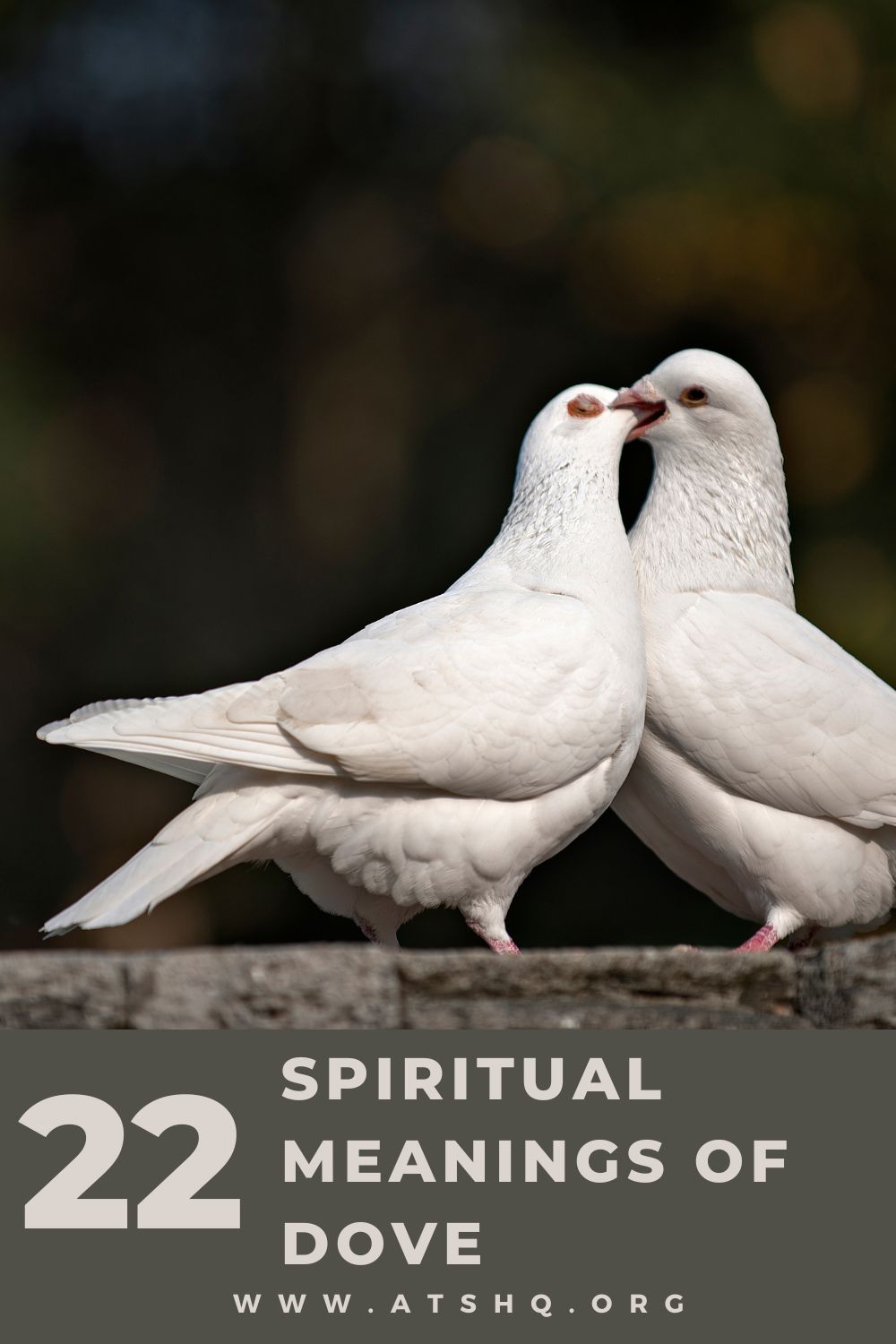 1. The General Symbolism of Doves

1. Doves as a Symbol of Peace

Doves have long been a universal symbol of peace and humanity. Whether this comes from their origin in the Christian faith – discussed further below – or another source, seeing an image of a dove can signal peace after wartime, the peaceful passing of a loved one, or even letting go of a past hurt or bitterness.

Doves as symbols of peace can also be found in political cartoons, pacifist literature, and banners promoting the end of wars or altercations.

2. Doves as a Symbol of Love

Doves have been associated with love since the tales of Greek mythology. Back in the Middle Ages, some people also believed that doves chose their mates on Valentine’s Day.

A turtle dove in particular symbolizes love, as it tends to find lifelong mates, and they are often seen perched and purring affectionately with one another. Turtle doves are great representations of loyalty and monogamy in romantic relationships.

3. Doves as a Symbol of Faith

Doves have been found in the proverbs and scripture of various religions. You may see doves in religious paintings, within stained glasses in cathedrals and churches, and as part of some church logos.

Generally, across the board, they represent either a holy entity or faith and action during uncertainty. We’ll dive into these representations by religion further below.

4. Doves as a Symbol of Freedom

Birds in flight have always symbolized freedom, and doves are no different. Doves can use their wings to take them anywhere they want to go. This is the ultimate representation of being free and independent from the circumstances around you.

2. The Symbolism of Doves in Religion

Since most of the generalized representations of doves come from religious bases, we will analyze what doves symbolize in Christianity, Judaism, Islam, and Paganism.

The first sign of the dove was found in Genesis, during the story of Noah’s Ark. Noah was instructed by God to build an ark to prepare for an impending flood. He filled it with two of each animal and his own family, and they survived as the rest of the world was covered in water.

After months of living in the ark, Noah sent out a dove to see if it would find land. It did not find a place to land and returned to the ark. One week later, Noah sent the dove out again and this time it returned with an olive leaf. The third time he sent it out, it did not return, signaling that the water had dried up and there was land.

God later made a covenant with Noah saying he would never flood the earth again.

In this story, the dove with the olive branch began to represent peace. It also represents faith in God’s promises.

In the New Testament, a dove came down from the heavens, representing the Spirit of God during the baptism of Jesus. This is also mentioned in Mark 1:10 and John 1:32. In this regard, a dove can also symbolize the Holy Spirit.

Doves in both of these senses were soon incorporated into Christian paintings and artwork, from Ancient Rome and throughout modern times.

Judaism adheres to the Old Testament of the Bible, which includes the story of Noah and Ark. This tale adds an extra layer because, in Hebrew, the dove’s olive leaf is interpreted as its preference to eat bitter foods in God’s service rather than sweet foods in the service of men.

In the Talmud, which is a body of Jewish civil and ceremonial law, the spirit of God over open water is also compared to a dove hovering over her chicks. In Judaism, doves can also represent a symbol of the human soul and the people of Israel. 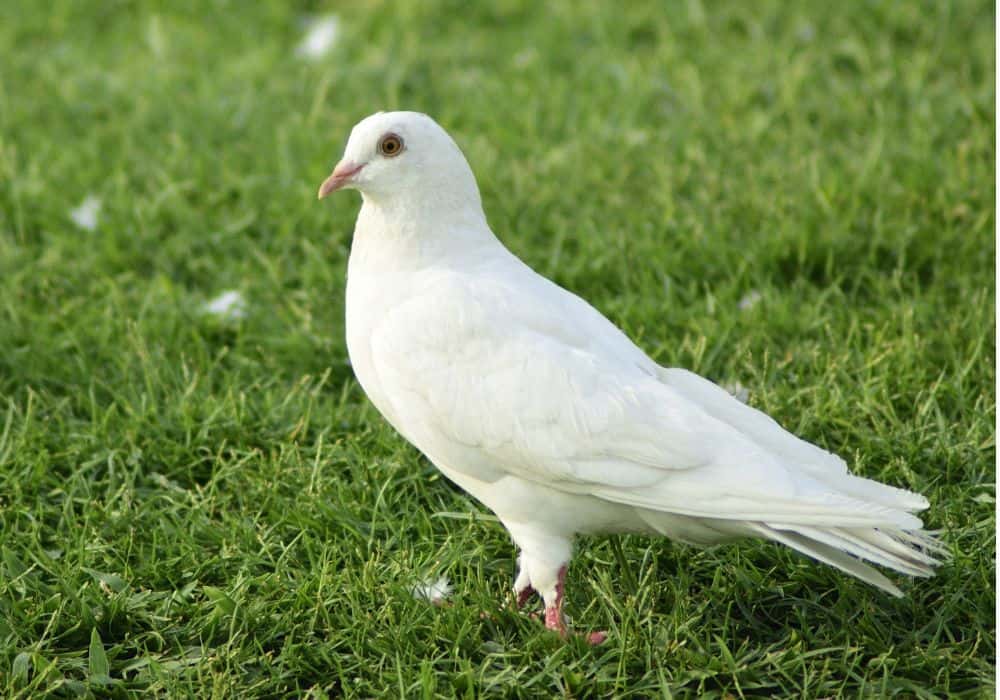 Doves in Islam play a part in an important story about the Prophet Muhammad. In this story, doves represent safety and protection.

Muhammad is on a journey to Medina, called Hijra. He stops in a cave where he is suddenly surrounded by his enemies.

Then, God sends him assistance through a pair of doves and a spider. These creatures stand at the front of the cave, as the spider creates a large web. This made it seem like no humans had been nearby or in the cave recently.

The enemies disperse, and Muhammad is safe.

The Hindu goddess Parvati stands for the dove. Parvati is a benevolent goddess of power, devotion, fertility, and harmony.

Controversially, the Hindu god of death, Yama, also carries doves, but only as messengers.

Paganism includes non-Christian and pre-Christ religions, such as those of shamans, Wiccans, Druids, etc.

In ancient Mesopotamia, doves symbolized the goddess of love and war called Inanna-Ishtar. At one point, this goddess was believed to have transformed into a dove herself. Images of doves can be found on cultic objects representing this goddess from 3000 to 2001 B.C.

In the ancient Levant, an area of Southwest Asia, doves represented the Canaanite goddess Asherah.

3. The Symbolism of Doves in the Military 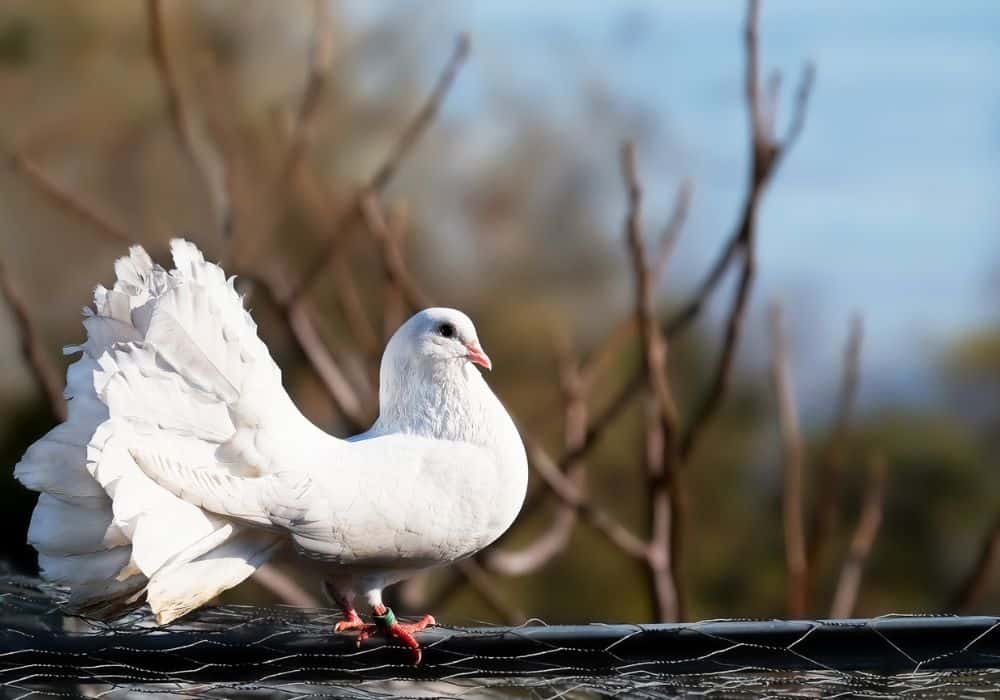 The Royal Air Force of the United Kingdom uses a dove – more specifically, a homing pigeon – as the main image in one of its crests. This represents the Tactical Communications Wing of the Air Force.

4. The Symbolism of Doves in Culture

While doves symbolize peace for most cultures, it isn’t the case for all of them. Here are what doves represent for Native Americans, ancient Egyptians, the Chinese, and the Japanese.

Pigeons and doves come from the same order of birds, called Columbiformes. Some pigeons are even white and mistaken for doves. In most Native American cultures, both pigeons and doves represent monogamy due to how they pair for a lifetime.

Because of this, some tribes used doves for fertility magic. They believed the doves delivered messages from the Great Spirit to humans and vice versa. Doves were seen as a symbol of fertility and the Great Spirit’s deliverance.

Since ancient times, the dove has represented innocence and the Tree of Life for Egyptians. Since it symbolized purity, you could find dove drawings as early as in the Hieroglyphics of Horapollo.

For the Phoenicians, the dove was also associated with Astarte, the goddess of fertility and love.

As opposed to peace, doves in China represent loyalty and long life. This translates to having long and peaceful relationships during one’s life.

Doves in Japan are used as a symbol of peace and the end of an altercation or war, but only when they are drawn carrying a sword. The Japanese also honor those who died during WWII with an image of a dove.

5. The Symbolism of Doves in Mythology 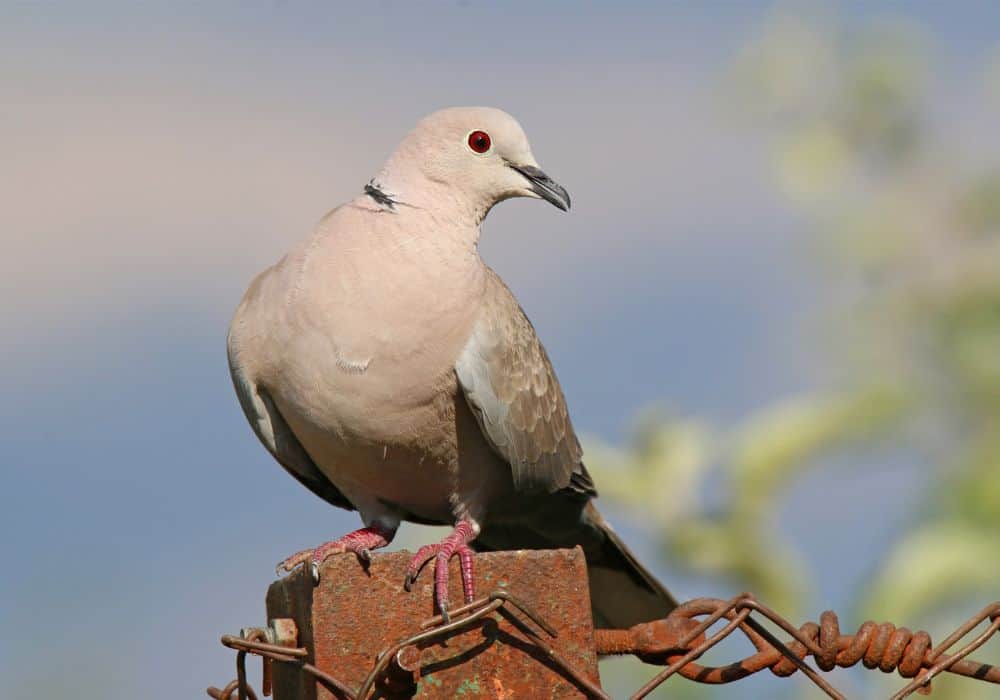 Mythological gods, goddesses, and stories span centuries and countries worldwide, and doves have found their place among a few of them.

Ancient Greeks also connected doves with the columbine flower, originating from the Latin word for dove. This flower represents peace.

Doves in Japanese mythology are the familiar spirit of Hachiman, a divinity of war and archery. Hachiman has characteristics of both Shinto, a Japanese religion, and Buddhism.

The Celts perceived the dove to be an oracle bird, much like the raven. They believed doves gave signs of otherworldly activity, so they would often observe their flight patterns and try to interpret them.

Doves were also used for sacrifices and symbolized healing.

6. The Spiritual Symbolism of Doves 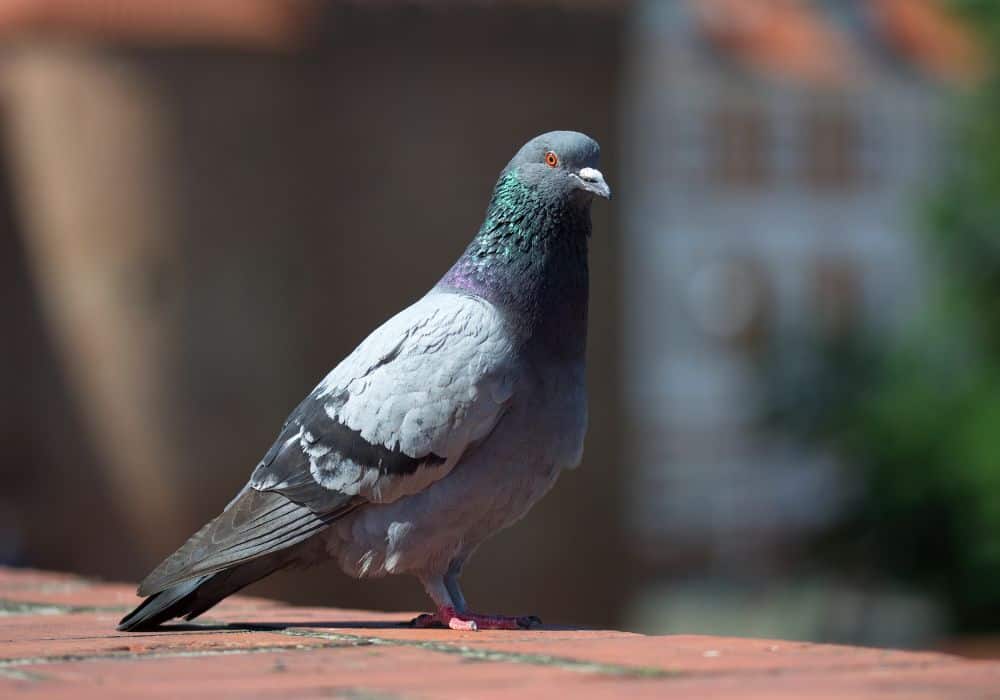 Doves can take on different spiritual meanings in dreams, as spirit and totem animals, and in the form of omens.

Doves appear in dreams more often than not. As flying birds, they have a strong tie to spirituality. A white dove in particular can represent peace, love, fertility, or femininity. It can also be a symbol of hope and faith in Christianity.

Here are some typical variations of doves in dreams and the potential meanings behind them.

Spirit animals are animals we relate with that have an internal spirit trying to guide our paths. They may also be called power animals.

If the dove appears to be your spirit animal, you may be in a moment of spiritual awakening or renewal. This is a great time to explore your beliefs, focus on them, and strengthen them.

Having a dove spirit animal could also mean it’s time for you to put more effort into your romantic relationship, focusing on your partner and domestic responsibilities.

Doves embody peace, and this is what you should aim to do as well if the dove is your spirit animal.

Totem animals represent a family, tribe, or group of people over the years. The dove totem animal connects this group with joy, harmony, and peace. This group or family will work well together and communicate effectively with one another.

Doves are seen as peaceful messengers, which means if one lands on you unprovoked, the universe is trying to tell you something. You may be able to interpret the message by the behavior and appearance of the dove.

Not all doves are white, so if yours is spotted or even dark, this may be a bad omen. A visit from a white, light, and/or healthy dove could mean peace and hope are coming your way.

Great minds from different eras have mentioned doves in their discourses. Here are a few quotes that mention doves and what they symbolize.

Doves are usually white, gentle creatures that are one with nature and humankind. They’re best known as symbols of peace, love, and freedom, although they have various other representations across cultures and religions.

With a gentle nature since the beginning of time, doves are continuously viewed in a positive and heartwarming light.