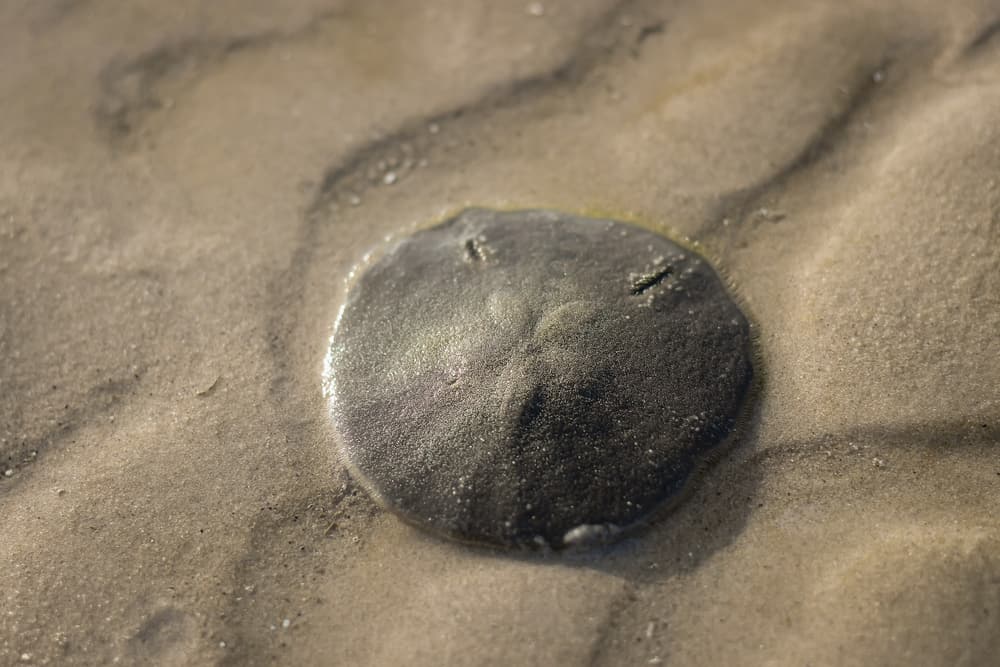 Sand dollars are very peculiar animals with a round shape and floral-like design on the top. If you’ve ever been to the northern Baja California coasts, you’ve probably seen them. However, once they reach the shore, they’re most likely dead. Not many people have seen a sand dollar alive. Would you like to know more about sand dollars? Read on. We’re about to show you some interesting facts about these species.

The sand dollar (dendraster excentricus), also known as sand cake, is a marine animal belonging to the order Clypeasteroida. The species to which they belong is the Echinaracnius parma. Its most common name is Sand Dollar. That’s because when they die, the color of their bones fades to white, and the entire skeleton shape looks like a coin.

Sand dollars are similar in shape to sea urchins but are flat. They are invertebrates whose relatives are sea urchins, sea cucumbers, and sea stars. These animals have a simple nerve ring but no brain.

Sand dollars do not grow larger than 3.5 inches in diameter, according to the Monterey Bay Aquarium. Skin covers its shell, which is the spines that give it a velvet appearance. The skeleton of the sand yuan is composed of calcium carbonate bone plates with a five-petal flower pattern (petaloid ambulacra).

A live sand dollar’s appearance is very different, as their color varies from purple to reddish when they are alive and at the bottom of the sea to the pale white color that their skeletons take on at the seashore. The white color develops because they fade in the sun, and their spines fade away.

When sand dollars are in still water, they stay with half of their bodies buried in the sand, and their upper part stands out in the current. However, they lie flat and buried in the sandy floor when in rougher water.

Living sand dollars have a layer of small spines that move. They use their spines to move or to crawl into the sand. Their upper spines serve as gills. They breathe through their tube feet, which are the holes in their petals.

Sand dollars live on the sandy-mud ocean floor around the world. They are common species of burrowing sea urchins that live in groups to a maximum of 131 feet.

They are not endangered species. In the northern hemisphere, sand dollars are found from northern Baja California to Alaska. They are usually found in the subtidal and intertidal zones in sheltered bays.

They tend to cluster in one area, and there may be as many as 625 sand dollars in a square yard. It is the way they live and helps them to reproduce and increase their chances. They reproduce by spawning, and if fertilized, the larvae will remain floating until it forms their test and settles.

What do sand dollars eat? 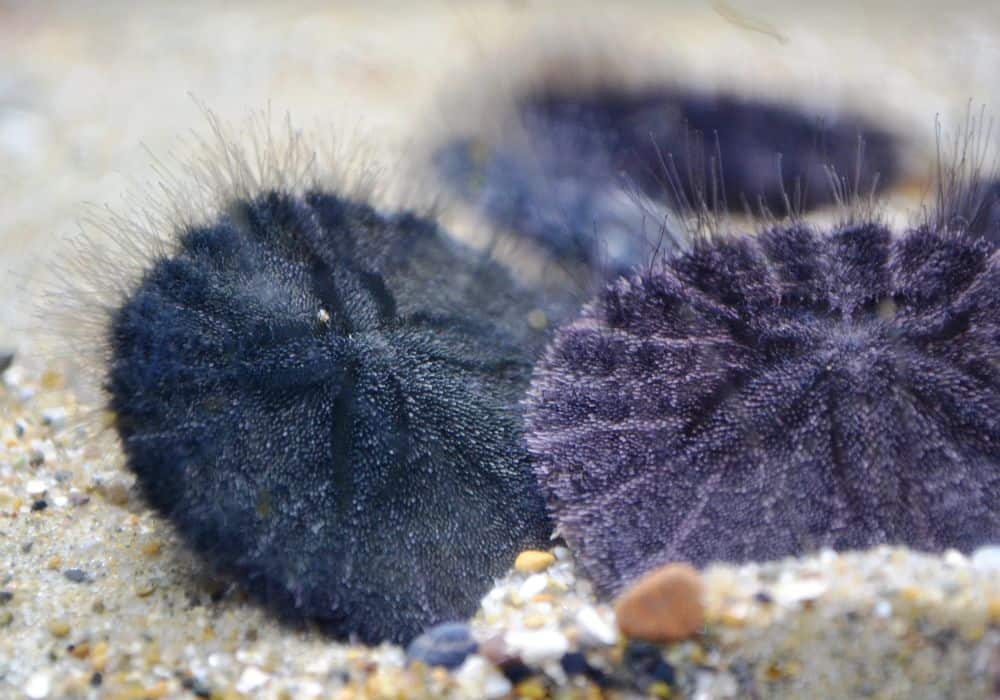 Sand dollars are omnivorous and have different ways of eating, depending on their position. They are suspension feeders when they are upright. They eat microscopic algae, small copepods, diatoms, crustacean larvae, and prey they catch with their spines and feet.

However, they feed on diatoms, detritus, and deposits when held flat and buried. They can sweep all of the food particles with the small bristles on their spines, called cilia, to the mouth center, which is on the bottom side of their body. These animals can also feed on crustaceans larvae.

As for sand dollar cubs, they feed on microscopic plankton and do not rely on their parents for provision.

How do sand dollars eat?

The sand dollar’s mouth is called Aristotle’s lantern because it has jaws with five rows of “teeth”. The sand dollar chews its food for up to 15 minutes before swallowing it. It then takes about 48 hours to digest what they eat.

The teeth that the sand dollar has in the center of its mouth grow continuously. Its teeth are often worn away at their free ends. Ligaments and ossicles of the jaws hold them. In addition, they have small muscles with which they shift their teeth.

Can sand dollars be kept as pets? 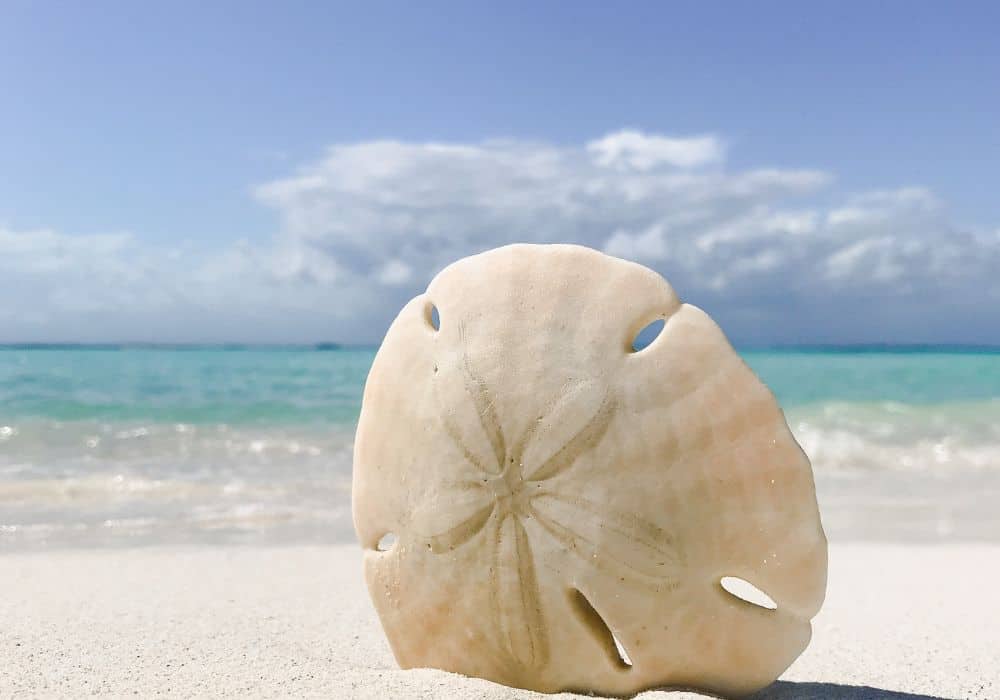 Yes, you can keep a sand dollar as a pet. However, you must keep in mind that the sand dollar does not thrive in fresh water. It needs a minimum level of salinity to reproduce.

Sand dollars cannot survive long out of the water. These animals breathe through their petals and only live a few minutes out of the water. It is best to find out about the regulations in your area, as it may be illegal for you to take them out of the sea.

It is best to keep sand dollars in an aquarium with other marine creatures, so they can feed themselves with what they find in the habitat you create. This way, you don’t need to feed them.

However, these animals need a thick sand bed, so keeping them in home tanks is not the best option.

What do sand dollars eat in capacity?

If sand dollars are in captivity, they can feed themselves, so there is no need to be hand-fed. If they are in a saltwater fish tank, they feed on plankton, fish waste, tiny invertebrates, and algae.

However, it is best not to place sand dollars in fresh tanks, as they do not have enough particulate matter or debris for these animals to survive for long.

What are Sand Dollars Predators?

Fishes, crabs, and sea stars (starfish) eat sand dollars. When sand dollars feel threatened, they hide from predators by burying themselves under the sand; this usually occurs in the presence of pink sea stars. Pink sea stars kill many of them when they pass through a bed of sand dollars.

How do you know if a sand dollar is alive or dead?

Although you can find them on beaches, most people have not seen these animals alive. These animals live between six and ten years. You can count the rings found in the exoskeleton to calculate their age. The number of rings increases with size.

If you want to know if you have found a live or dead sand dollar, you only need to check if it is moving or not. Its small spines move when it is alive. Also, if they are a dark color, like brown or purple, and not white, they are alive.

Another way to tell if they are alive is when you hold them in your hand for a minute. They stain your fingers yellow with a harmless substance they secrete called echinochrome.

However, if you see that it is alive, it is best to return it to the water, as its spines can generate puncture wounds that can burn if infected.

Sand dollars are very interesting animals. Due to their peculiar designs, they’re often used as jewelry that people sell on the beach (since they’re dead it’s ok for them to do that). Yet, However, you should know that these animals are protected by US law. So remember, if you’re collecting sand dollars, it’s a good idea to check if they are living or dead.