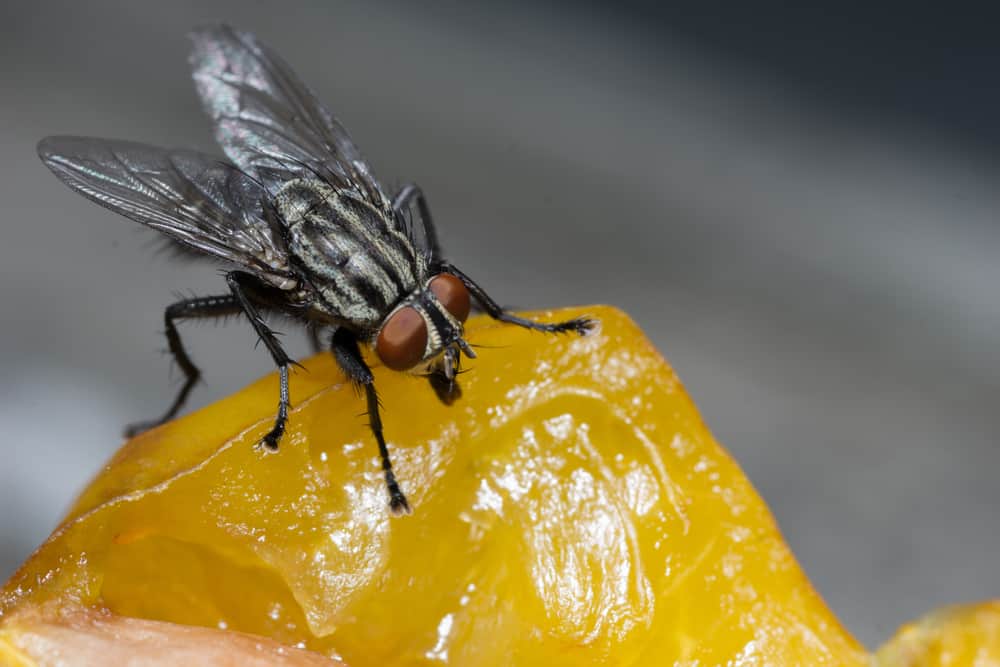 The symbolism attached to the fly is distasteful and harmful. The fly is often connected to negativity, lurking danger, gossip, and mostly everything terrible. Although many view these insects as carriers of bad things, that is not the only thing they represent.

Positive virtues like prosperity and industriousness are also attached to the fly symbolism. Before going into these symbolisms, let’s review some facts about the fly. 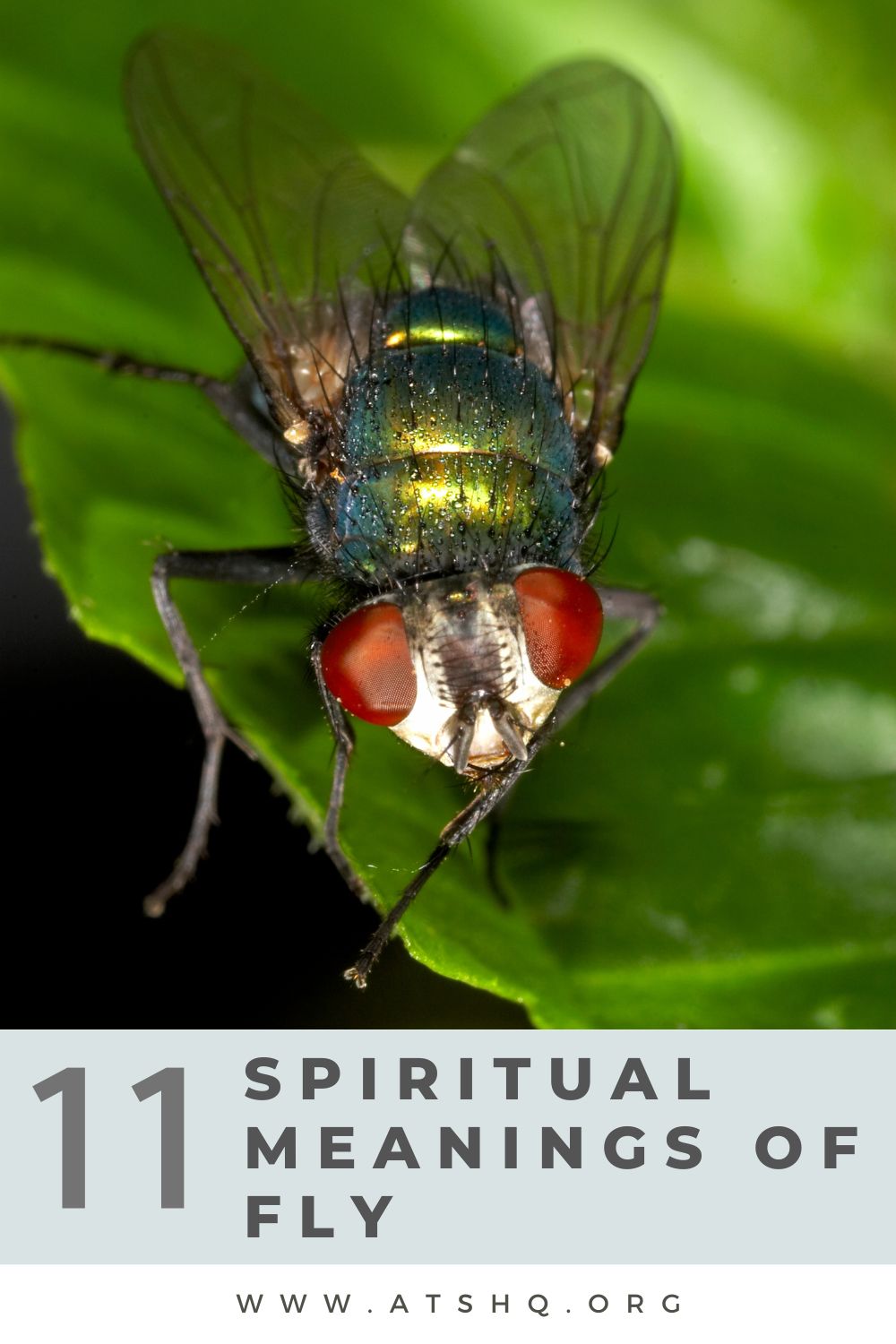 Flies are insects from the order Diptera. The name Diptera was derived from two Greek words; ‘di’ meaning two and ‘pteron’ meaning wings. Although the insects in this order, including the flies, have more than a pair of wings, they only use one pair to fly.

Their second pair of wings, their hind wings, evolved into halteres, which are high-speed rotational movement sensors that allow for advanced aerobatics.

These insects are everywhere, and their constant buzzing characterizes them. They are also connected to decay as they are part of the decomposition process of dead things. With their connection to decay, it is no surprise that they are disease carriers.

Flies multiply quickly; flies like the housefly and the fruit fly lay up to 500 eggs at a time.

When it comes to eating, the flies don’t have any mouth part that enables them to chew. Instead, they spit out enzymes that dissolve the food into liquid before they consume it.  They also taste with their feet.

The insects serve as great detectives as they can be used to estimate the time of death of a corpse. Some flies, especially bee flies, also help in pollinating plants.

Fly As A Spirit Animal 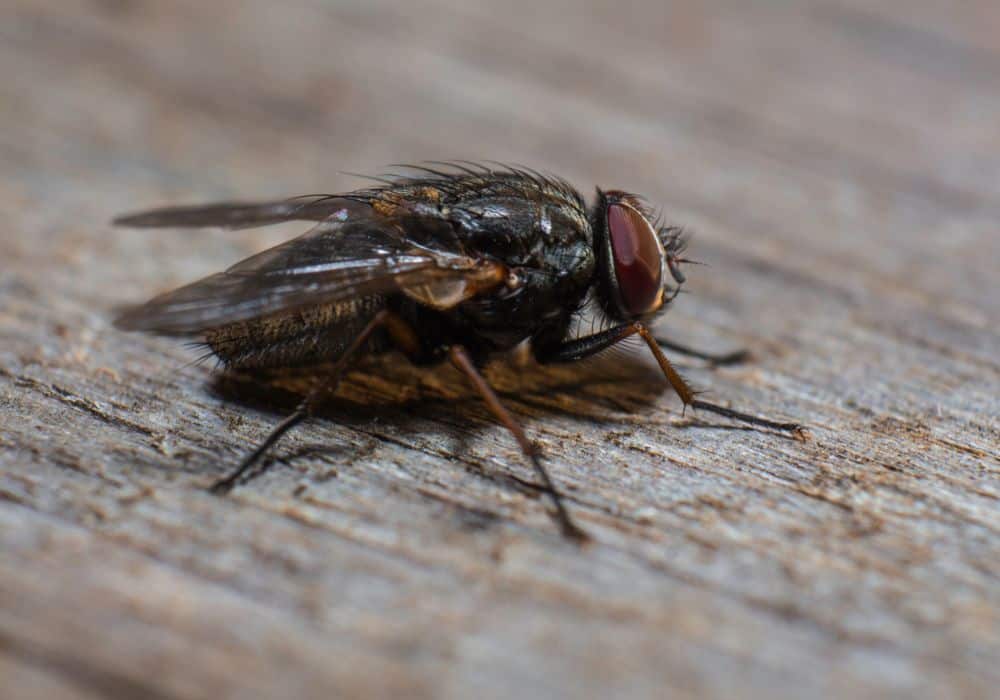 Although the fly may not seem remarkable, the fly spirit animal is humble and impacts vast knowledge. It is linked to perseverance, transformation, and adaptability.

If you have the fly as your spirit animal, then you’d be sure to be humble and have the strength to confront changes, no matter how and when they come. Another virtuous trait they possess is gratitude.

Although you might seem weak and small, the fly spirit animal gives you courage and the heart to face life and all of its challenges head-on.

Like the fly on the wall, the fly spirit animal gives you sharp vision and pushes you to seek new perspectives.

Fly As A Totem Animal

Those with the fly totem animal are pretty mobile and fast. They are also masters at confronting change and adaptation.

The growth stages of a fruit fly are likened to the different changes humans go through. The fly totem animal is there to guide you through these changes.

The fly totem animal can also represent the negative aspect of human nature. If the fly is your totem animal, don’t lose hope; push through and don’t just accept things as they are.

Fly As A Power Animal

The fly power animal stands for growth and accountability. It pushes you to acknowledge your flaws and try to be better. It makes you recognize that every action you take has consequences, and you should always face them.

If the fly is your power animal, you would mostly always follow the flow. This doesn’t necessarily mean you are or should be careless; it only means that you are always prepared no matter what.

Sure, there might be bad changes and situations, but With the fly as your power animal, you see opportunities to grow in strength and wisdom in these situations.

Fly Symbolism in Different Parts Of The World 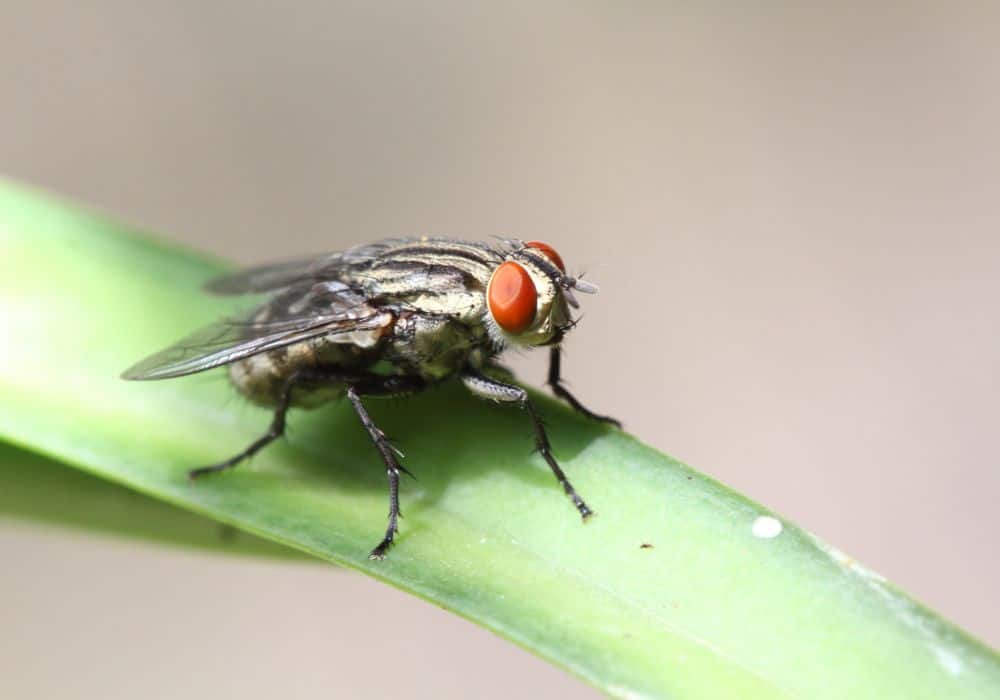 In different cultures, the fly’s symbolism takes various forms. Some are bad, while some are good. Here are the symbolic meanings of the fly in four other parts of the world.

In the myths of Native American cultures, the fly doesn’t appear very often. Many tribes link the flies to disease curses and dark magic, primarily because the flies tend to be around dirt.

Not all the tribes in  Native America perceive the flies as carriers of diseases.  According to guideyourpet.com, some Native Americans believe that the fly represents change, new beginnings, and transformation.

For instance, the Southeast Nations believe that the fly is the bringer of the first fire to their people. The Navajo tribe believes that the fly connects with the people who have lived before and is also a bearer of messages from their ancestors.

The Navajo tribe considers there is a Sacred fly of Navajo sand painting called Big Fly or Do’ tsoh. Big Fly is said to stay around sand painters and might sometimes even sit on their shoulders.

In the Hopi tribe, they believe in the existence of a Death Fly called Mastop, represented by two kachinas. These kachinas, utilized for the Soyal Ceremony, stood in for a Hopi woman’s fertility prayer. In this sense, the fly symbolize fertility.

The Hopi tribe also believes in The Fly, also known as Sohonasomtaka. The kachina, which represented Sohonasomtaka, was made present during Hopi rituals to stop any intrusion from outsiders.

Sohonasomtaka was a warrior that punished rogue clown kachinas. Native American tribes and cultures have different flies in their legends, myths, and traditions; depending on the situation, these forms could be either good or bad guardians.

In Africa, the Ancient Egyptians did not see the fly as something so accused; the fly was a symbol of bravery and perseverance. In Queen Ahhotep’s tomb, a gold chain with three fly-shaped pendants was found.

According to worldbirds.com, this was a chain gifted to her by her sons for her wavering support in fighting for liberation against the Hyksos.

The New kingdom soldiers are often given more miniature golden fly amulets as a sign of their persistence and bravery. In Egypt, flies are associated with the human soul and the afterlife.

This is partly because before the embalming process of a corpse, the fly often lays eggs on the body when the body is left to rest. Priests believe that the adults that eventually leave the body are connected to that person’s soul.

Fly-shaped amulets were usually placed on mummies made to reunite the dead body and their souls. In the old and middle Egypt kingdom, flies depicted hieroglyphics were used to represent bravery.

Just like in Native America, not all fly symbolism is terrible in Asia, as some people also believe that the flies hold positive meanings.

In Mesopotamia, the fly is associated with death and evil; this is partly because Nergal, their god of death, plague, and war, was often depicted as a fly even on ancient seals.

He was in charge of the underworld, and Christians often associate him with a sinister aura. They also believe flies are the messengers of death, pestilence, and evil companions.

However, some parts of Mesopotamia believe in the Goddess Ishtar. Her fanatics use beads in the form of flies to create euphoria. The goddess Ishtar was not only the goddess of war but also of sexual love. She was the symbol of fertility in Mesopotamia.

So just like in the Hopi tribe, the fly somewhat represents fertility. In a Sumerian poem, when Goddess Inanna went to save her husband from the netherworld, she was aided by a fly. In this poem, the fly represents a helping spirit.

In Asia, it is also believed that the flies hold the disturbed and restless souls of those who have passed on. The people would often catch a fly and feed the fermented rice. The troubled soul would be happy about this happy gesture and move on.

In this Celtic mythology, flies are rare; however, maggots appear frequently in old doridic legends. They stand as symbols of death and decay. People often stay away from maggots refusing to touch them.

However, maggots are found in rotting and stagnant vegetation, and since they manage to grow and survive in these conditions, they are also associated with adaptation and progression.

Meaning Of A Fly As A Tattoo 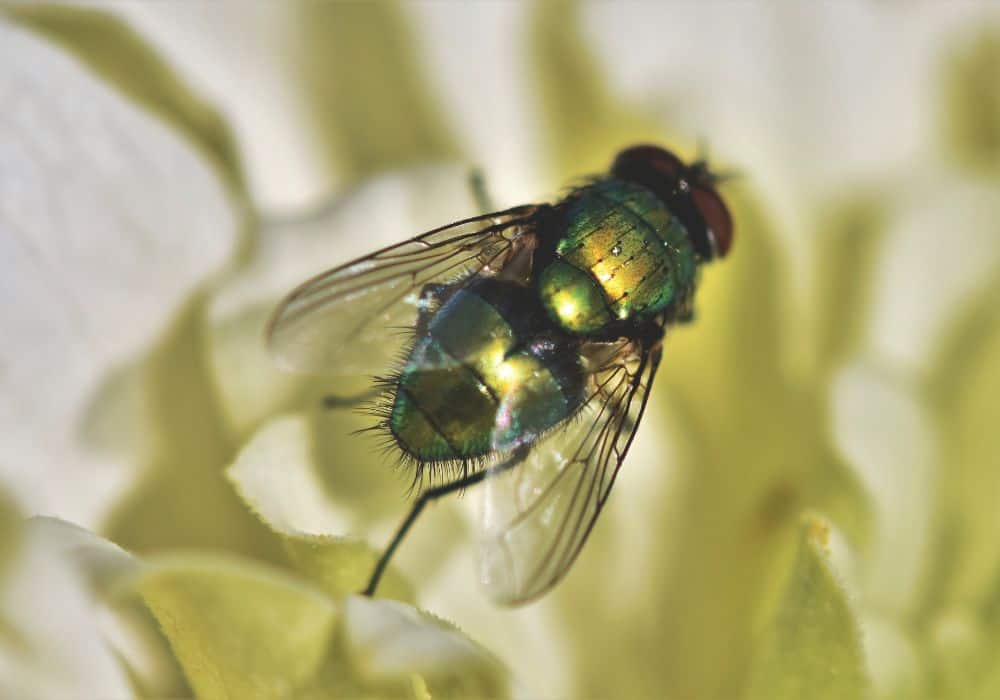 When people decide to get a tattoo on themselves, they want to make something ethereal and magnificent and not something as disgusting as a fly. However, some still choose to get a fly tattooed on themselves for their reasons.

A fly as a tattoo could mean perseverance, religious affiliation, and good judgment. It could. This also suggests that the person in question is interested in insects.

Meaning Of A Fly Dream

Yourtango.com says that seeing a fly in your dream could stand for many things, including anxiety, irritation, guilt, fear, or frustration.

If you were to dream of being swarmed by flies, it means that you are probably in a toxic relationship with friends. It serves as a warning to be wary of the friends you keep.

A fly in your dream is also a sign to prevent something terrible from happening. A recurring dream with a fly means that there is an important person or thing you have kept on hold.  It could also mean that you are holding on to something and letting it go.

A dream of dead flies means that you are coming to the end of a confusing challenge, and you will overcome it.

Dreaming of a fly is not necessarily bad, as even though it means something is wrong, it is still a warning and a sign to avoid such a thing.

In Christianity, flies are associated with nothing good. They are detestable creatures connected with everything evil. In the Bible, they are linked to evil and sometimes Satan, often referred to as the Lord of the flies.

They act as parasites and scavengers; they feed off of carcasses and are also part of the process of decay and decomposition. This is why they are also linked to death.

Apart from being linked to death, they are linked to bad smells, sickness, dirtiness, and impurity. Flies were also a form of punishment sent as the 4th plague to Egypt in the bible.

What Does Your Encounter With A Fly Mean?

There are many occasions in which you can encounter a fly, and depending on how you meet that fly, it could mean different things.

Coming in contact with a fly could also mean that there is possibly something in your life that can cause you danger and turmoil, and you must address it.

Since flies are often attracted to stagnant waters, it could mean that you are inactive and have been in the same position for a while. Check yourself, and if that is the case, you need to make a change.

A fly in your house could signify that the family members are holding on to emotions which could very well lead to the breakdown of their family relationship.

One fly following a person consistently means that the person will meet with a stranger very soon, and that stranger would most likely impact the person’s life.

Even though people don’t particularly like flies, they can serve as a powerful emblem that encourages positive life improvements. Although flies are typically associated with lies, death, rot, and gloom, they can also serve as warnings that help us anticipate and avert awful events.

Furthermore, flies can help us see aspects of ourselves that we have struggled to deny. In this capacity, the fly directs us toward chances to develop into better people. Please feel free to comment if you have any questions!