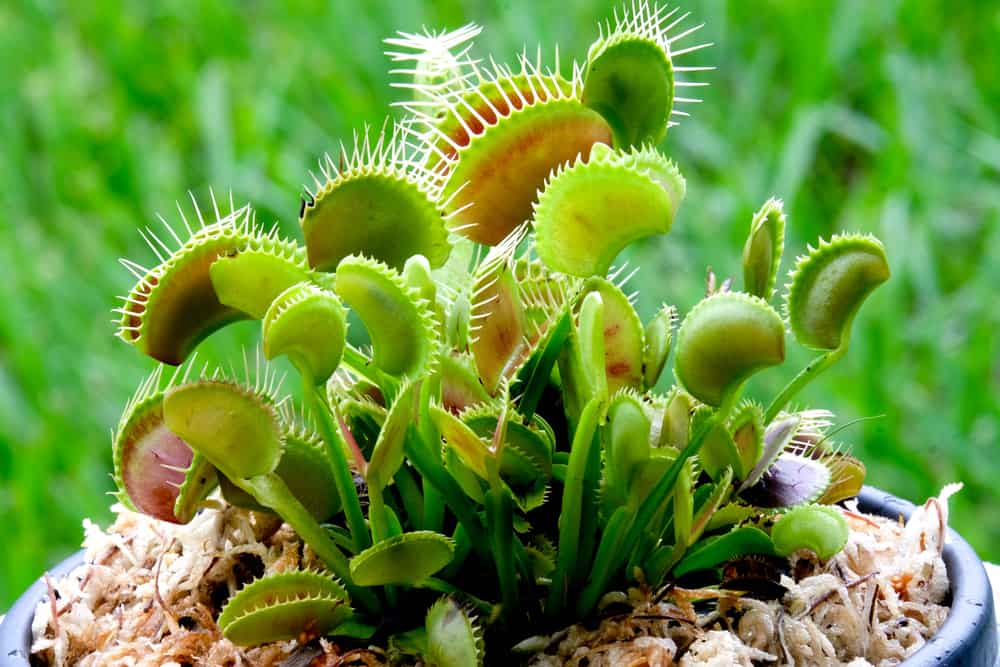 The Venus flytrap is easily one of the most exciting plants in the world. It goes against all the rules we think of when we think of plants – it’s beautiful, unusual, striking, and has a killer instinct.

It’s little wonder these plants are so in-demand right now, with homes worldwide stocking up on them for indoor and outdoor settings. So whether you’re a new plant parent and want to know everything about the Venus flytrap or are researching what they eat and how they survive, we have you covered.

What are Venus flytraps?

The first and most interesting fact about a Venus flytrap, also known as Dionaea muscipula, is that it is a carnivorous plant – yes, you read that correctly. It’s a meat-eater.

It has a signature way of catching its prey. Tiny hairs are on all of its ‘launch pad’ like leaves. When an insect triggers the hair, the leaf closes like a cage, trapping the insect inside. Sharp bristles on the edges act like teeth, ensuring no escape is possible.

What happens next isn’t exactly pretty – the plant releases digestive enzymes that slowly dissolve the insect inside. The plant absorbs them, and after several days, the trap will open up again, ready to strike the next unsuspecting victim.

Despite their unique appearance, Venus flytraps share some qualities with other plant life. They have beautiful, delicate white flowers that bloom in the springtime.

As well as feeding off insects, Venus flytraps have roots that can help ground the plant and absorb nutrients. Venus flytraps often grow in nutrient-deficient environments such as bogs and wetlands. Hence, they feed off insects for nourishment.

Although cultivated worldwide, Venus flytraps are native to only a small coastal area in North and South Carolina.

What do Venus fly traps eat?

Given their small size, these plants primarily feast upon small critter-like insects. And although they’re called flytraps, flies are far from the most popular prey.

The most common are:

Venus flytraps use their bright red colors on the leaves and sweet nectar to attract small insects like ants into their leaves. Leaves are low hanging and often touch the ground, giving the perfect platform for curious ants to walk up.

Ants are too small and weak to pry open the trap when it closes. And because the leaves have bristled hairs that become interlocked, they can’t squeeze themselves out, either.

Spiders make for an excellent meal for venus flytraps. The only danger here is that spiders come in many shapes and sizes. If they are too big when the trap sets off, it won’t close properly, and the plant won’t be able to digest it properly.

Beetles can be a tasty, notorious feast for your flytrap – if they can catch them! Like ants, ground beetles can easily travel up leaves and get snatched up in a trap. But some flying beetles, like the checkered beetle or long-horned beetle, can escape being eaten because they fly above the leaves and land directly on the flowering parts of the plant.

Grasshoppers and crickets are other popular groups of insects that can fall prey to the Venus flytrap. They are also quite popular for live-feeding indoor plants because you can readily buy them from pet stores.

Flies, honeybees, wasps, and butterflies aren’t often on the menu for flytraps. That’s because they fly. Sometimes, when they land on a leaf, they don’t activate any of the trigger hairs because they remain still. Additionally, they are incredibly fast-moving compared to slower ants and beetles – and can potentially make quick, life-saving escapes!

While there are instances of other insects making fine meals for plants, they’re generally either too big or long to make for regular meals. It’s rare for snails, slugs, and worms to get caught naturally.

If your venus flytrap is outside, it will no doubt catch more than enough insects to sustain itself on its own. But what about if your plant is indoors?

Some plant owners feed their indoor traps with dead insects. While you might think this should solve your plant’s problems, remember that a venus flytrap must detect movement to close over and release its enzymes.

If feeding your plant, use a toothpick or cocktail stick to “activate” the plant and mimic the struggle a bug would usually perform.

Lastly, Venus flytraps use photosynthesis to create their food like all other plants. They absorb and convert sunlight and carbon dioxide, producing sugar and oxygen.

How do Venus fly traps eat?

The entire process of how the Venus flytrap trap captures and consumes its victims is both fascinating and startling. Here is a brief rundown on each of the steps involved:

What eats a Venus flytrap?

Despite their killer instinct towards bugs, venus flytraps are entirely defenseless to predators. The most common threats to them include rodents, like raccoons and squirrels, and house birds, all of whom are attracted to the plant’s tiny, black seeds.

The only threat to the plant is false-alarms. When a trap activates but the prey is too big, the leaf turns black, will decay, and die.

It can be fun to feed your Venus flytrap, but there are some things you should keep in mind to ensure you’re helping your plant, not hindering it!

Your venus fly trap will often catch enough food to sustain it, all by itself. And although that may sound very boring, it’s important to remember – they can be easily overfed and overstimulated.

But if you do want to give them a headstart, and show them some kindness every couple of days, pay attention to the following:

The best soil and growing conditions

You can provide as many insects for your flytrap to gorge on, but it will perish if you don’t fulfill its basic needs and requirements. Don’t worry – these are everyday things many plant owners do. Just keep in mind the following basics to keeping a flytrap: