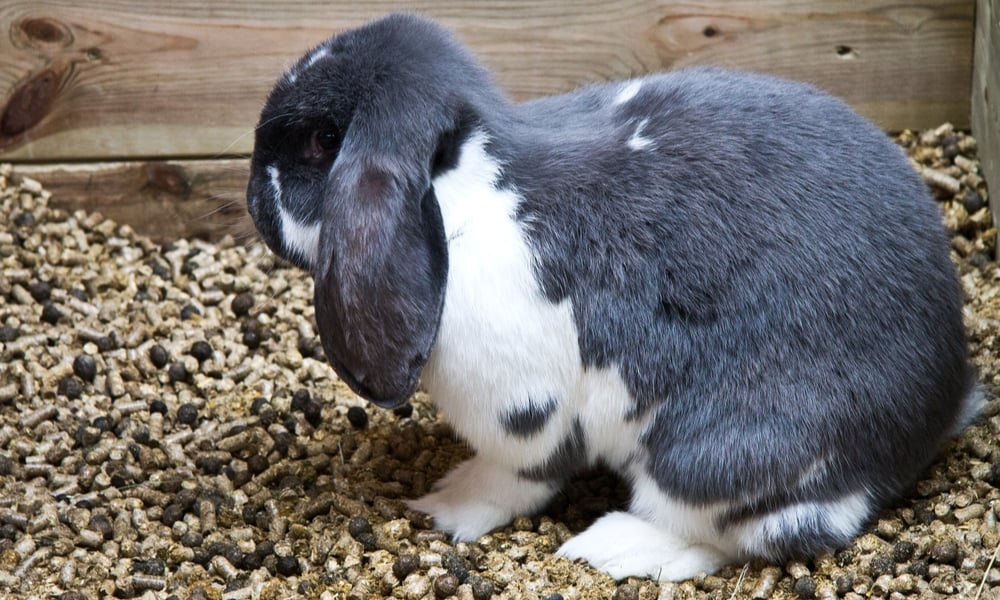 To every first-time rabbit parent out there – rabbit eating their own poop is extremely common. It might be weird and disgusting for us to witness it, but many animals, including rabbits, eat their poop. But to be precise, they have their own reasons behind doing so.

In this post, we’ll dissect the topic ‘Why do rabbits eat their poop?’. We’ll discuss everything in detail, from the signs of finding out if your rabbit is eating poop to the science behind the behavior. Let’s begin! 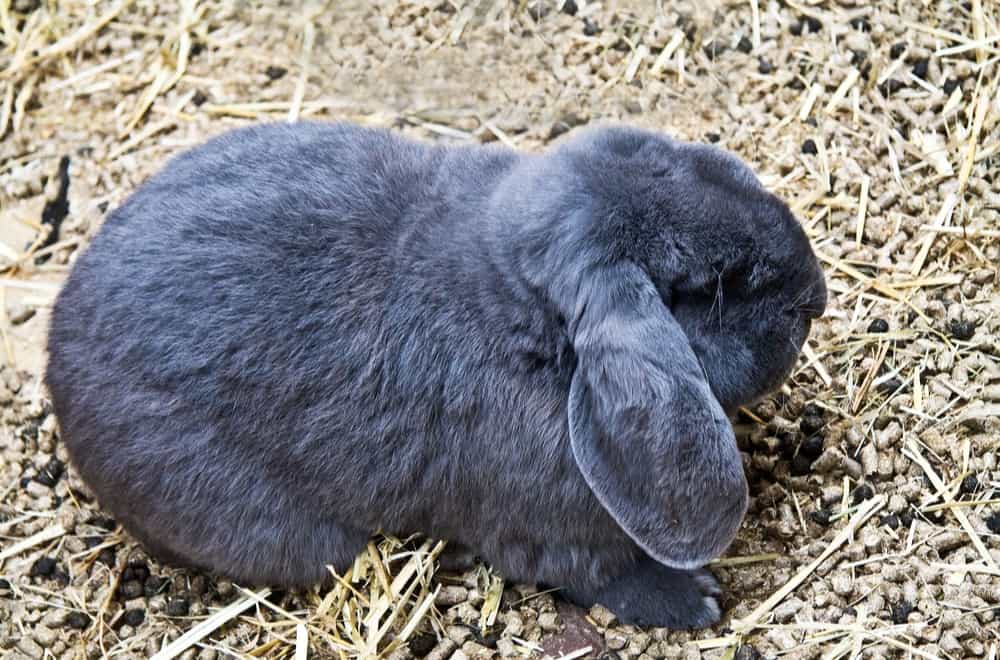 Animals have many habits that look weird, to us at least. And coprophagy is one of them. However, in the animal world, coprophagy is very common.

The term ‘copro’ denotes relating to feces, and ‘phagus’ means to feed or devour on. In simple words, coprophagy means eating feces.

The majority of coprophagous insects and animals gain certain benefits from this behavior. Take rabbits, for example; rabbits need to eat their poop. So, coprophagy doesn’t make these animals dirty as it is imperative for them to eat the poop.

However, in animals such as dogs, where engaging or playing with poop doesn’t pose any health benefits and thus are discouraged as unhygienic behavior.

Why Does Rabbit Eat Their Poop? Do They Eat Every Type Of Poop?

Rabbits do not eat every poop they produce. They only feed on a special type of droppings called cecotropes. This type of poop is formed when the food ingested is fermented in the rabbit’s digestive tract.

Cecotropes are produced in the cecum, which consists of ample bacteria and fungi necessary to produce this special type of rabbit poop.

Rabbits eat cecotrope as soon as these poops exit the body. So, it might be rare for you to see cecotropes lying around, or just to witness coprophagy in rabbits, as they just look like they’re licking around their tail, which is an incredibly common behavior among animals.

On the other hand, rabbits do not feed on their regular fecal pellets, and why would they? After all, they’ll not be getting any health benefits from it. But in the case of cecotropes, the case is entirely different. Cecotrope offers plenty of essential nutrients to rabbits.

This special type of poop is filled with vitamin B12, vitamin K, fibers, as well as proteins. Once the rabbits feed on these droppings, the food is reabsorbed once again in the small intestine, and thus, rabbits will avail all the nutrients from their food, excreting only waste fecal pellets.

Some rabbits produce cecotropes late in the morning or afternoon, whereas many produce them during the night, thus the name ‘night feces’.

What Is Hindgut Fermentation?

Rabbits are herbivores. Generally, a majority of rabbit’s diet consists of hay. These are high in fiber but low in calorie food.

Fibers are essential in a healthy rabbit diet. But the downside is that these are difficult to digest. Thus, there are several mechanisms in play to increase the digestive efficiency of their body.

For a clear explanation, we can see in other herbivores such as cows and buffaloes. These also feed on highly fibrous food. But the extraction of nutrients from these plant materials is not an easy job.

Rumen animals regurgitate their partially digested food stored in their rumen and chew on their one more time to extract all the essentials. Ingestion of cecotropes in rabbits also serves the same purpose.

Let’s discuss rabbits’ digestive process, in brief, to understand cecotrophy clearly. Firstly, foods ingested are consecutively broken down by digestive enzymes and acids in the stomach and small intestine.

The remaining undigestible products are then passed to the large intestine, where it sorts the materials into two categories. First, indigestible fibers which don’t contain any nutritional value are excreted out.

The other category, consisting of nutrition-rich proteins and soluble fibers, is passed to the cecum, where these are fermented to form cecotropes. This process is called hindgut fermentation in rabbits. Once ready for ingestion, these are then excreted out of the rectum. 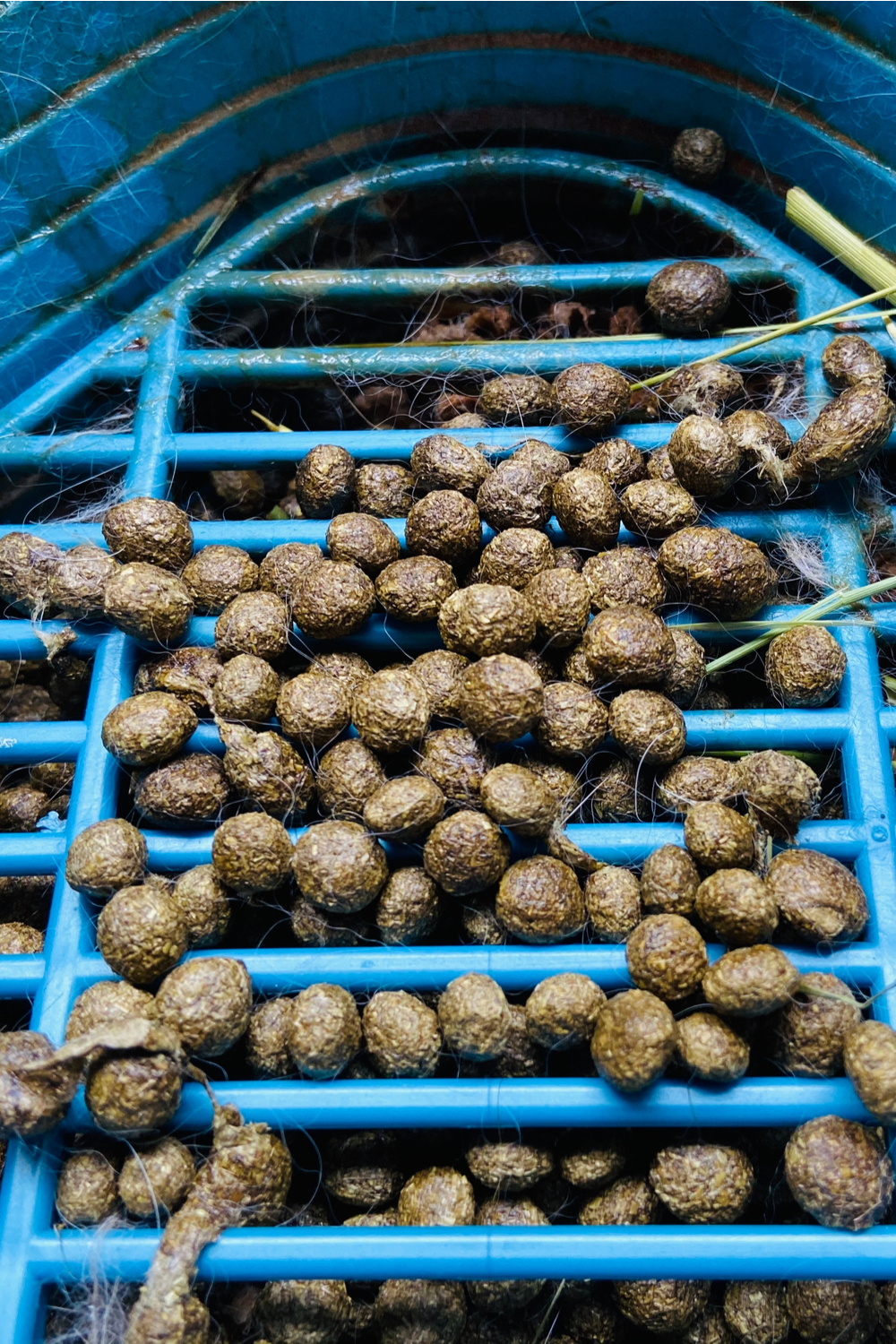 When under pressure, a rabbit’s fecal poop should crush, and the interior should look grainy and not at all moist. 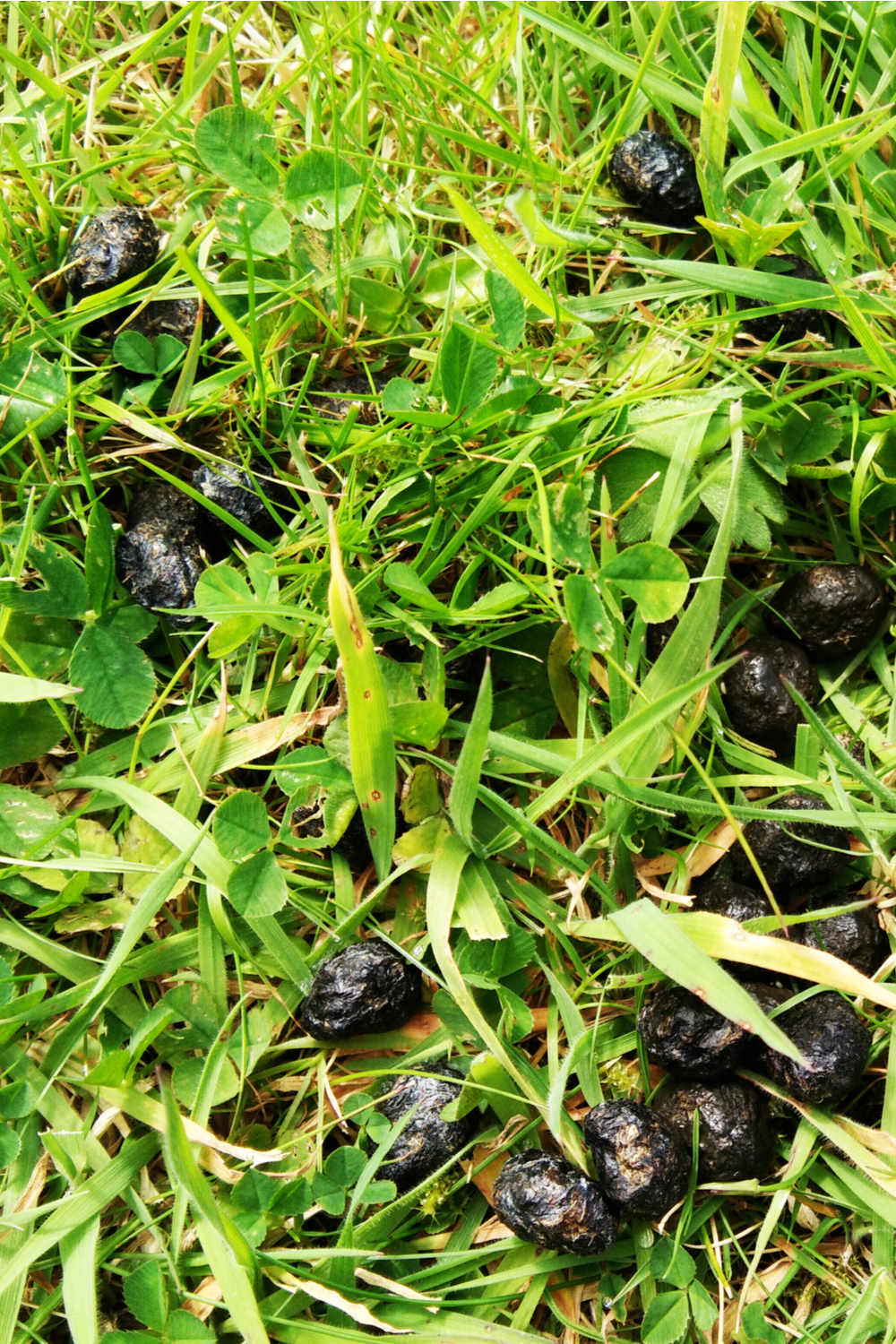 Unlike fecal droppings, cecotropes look glossy since they are coated with a layer of mucous. The color of this type of rabbit poop is dark brown to black. These shiny cecotropes droppings are tightly clustered as elongated mass, as in grapes, and emit a pungent odor.

It might seem confusing how rabbits can distinguish between their two poop types and only eat cecotropes, but they know by themselves when they poop cecotropes, and thus, eat them as soon as they exit the body.

At What Age Does Rabbit Start Feeding on Cecotropes?

Baby rabbits are unable to produce cecotropes at such a young age. However, once they start feeding on hay or fibrous food, they need nutrients and gut flora found in cecotropes.

So, around 10 days from birth, baby bunnies will open their eyes and start feeding on their mother’s cecotropes until their bodies are developed to produce this special type of poop on their own.

How to Tell If Your Rabbit Is Eating Their Poop? 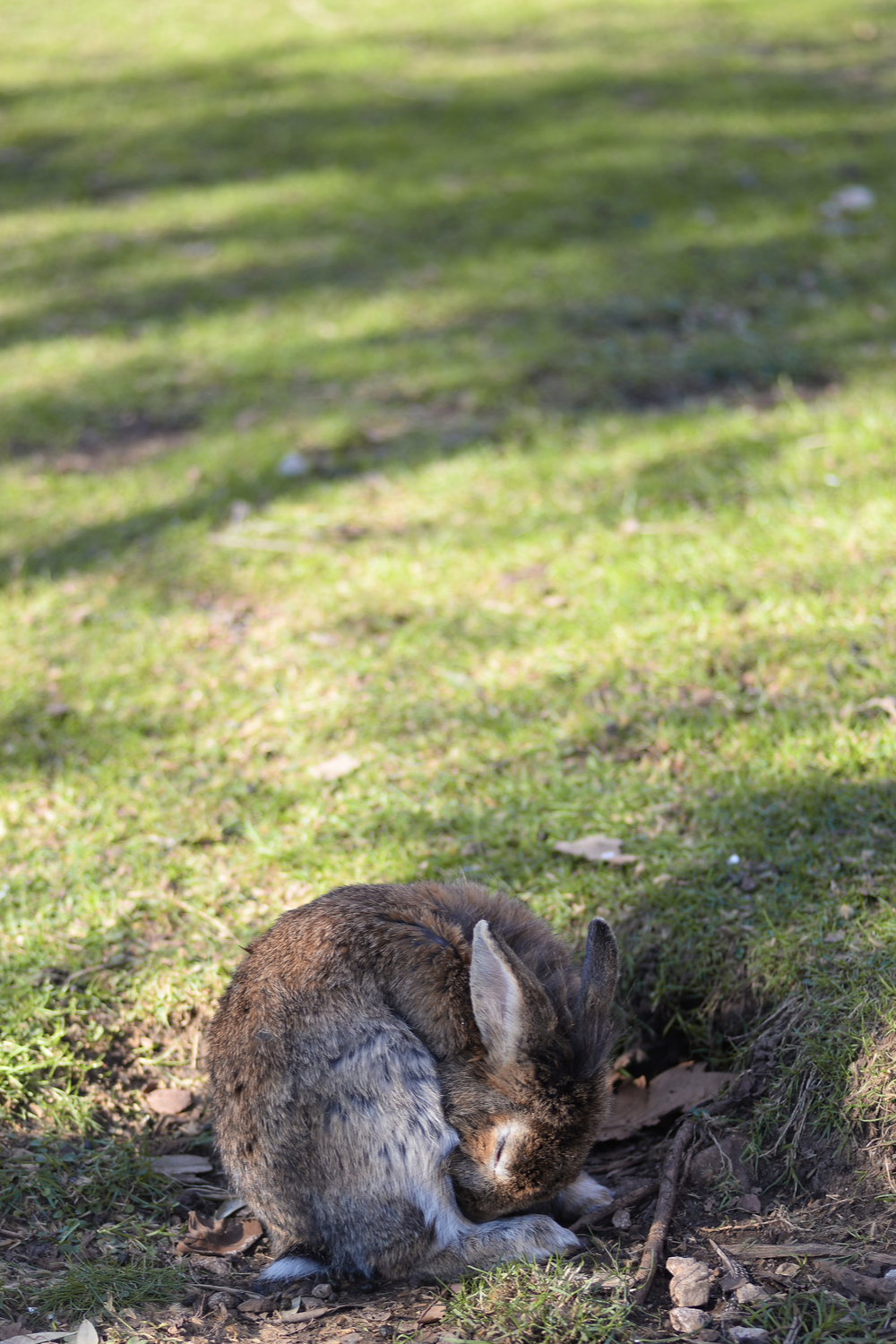 It is almost certain that your bunnies are eating cecotropes unless they’re unable to do so due to some underlying issues.

One major giveaway is a clean rear end. Cecotropes are soft and mucousy and very likely to stick to your bunny’s fur. But if their hind end is clean, the rabbit is eating their nutritious poop.

Also, check the cage or the area nearby for such sticky poop. If all the poops lying around are matte and regular, the rabbit is eating cecotropes.

Moreover, if you want to witness your bunnies in action, check on them at night or during the late mornings. If you notice them licking below their tails, they’re eating cecotropes.

Should You Stop Rabbit Coprophagy?

Many wonder if it is okay to stop rabbits from eating their own cecotropes. But the short and direct answer is – a big No!.

As we’ve mentioned before, though weird for humans to see, it is absolutely normal and healthy for rabbits to be coprophagous. To be precise, rabbits not feeding on their cecotropes might end up developing illnesses due to a lack of nutrition.

In fact, cecotropes are rabbits’ food and not fecal matter in literal. They just happen to be emitted from the rectum and resemble poop. Besides that, these are just partially digested food.

Runny Cecotropes: What Does It Indicate?

Too runny cecotropes are definitely a sign of an unhealthy diet. It indicates that your rabbits are eating enough fibrous food. Rabbits, in general, eat a bundle of hay, roughly equivalent to their size, per day. So, if you’re feeding them treats regularly, it’s time to pamper them with hay instead.

Too many Cecotropes: What Does It Indicate? 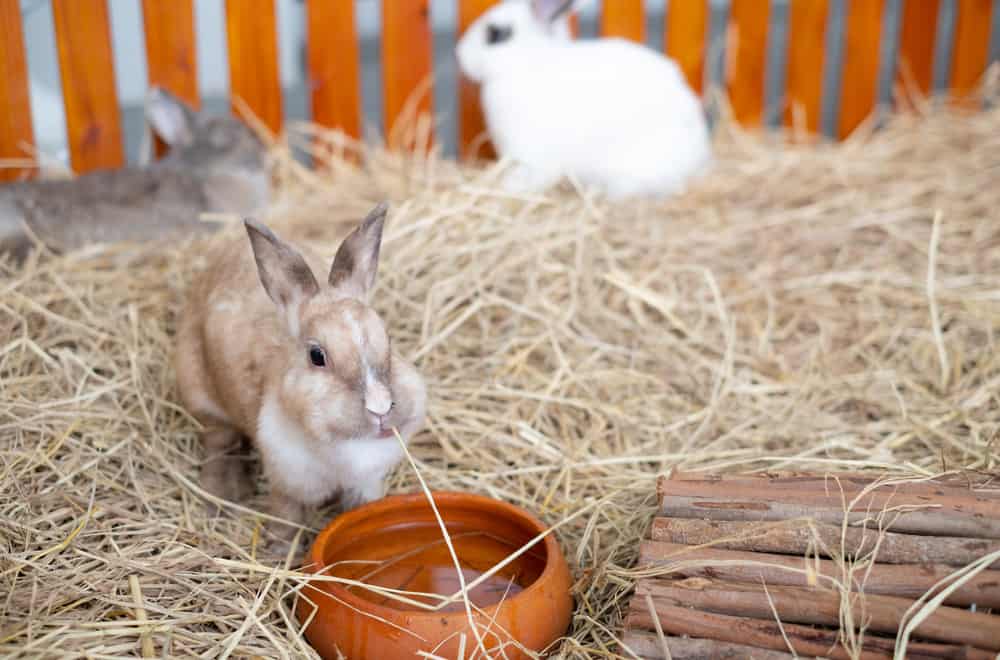 If your bunny is releasing too many cecotropes, that can cause real problems. There are only so many cecotropes a bunny can feed on. The rest remain unaddressed, which end up sticking to their fur and stinking as well as polluting the entire cage.

Also, cecotropes lying around can be an open invitation to flies, which can be disturbing and dangerous for your bunnies.

Like runny cecotropes, too many cecotropes also indicates that there’s an imbalance in the rabbit’s diet. This problem also improves with enough and a healthy intake of hay.

If your bunnies don’t seem interested in feeding on hays, reduce the number of pellets you feed them and ensure the availability of hay easily such that they can feed themselves whenever they’re hungry.

Is Your Rabbit Not Eating Cecotropes?

If you see cecotropes sticking to your bunny’s fur or just lying around the cage, your rabbit might not be eating their cecotropes, resulting in dietary insufficiencies in them.

There are a few reasons why a rabbit doesn’t eat cecotropes. First, they might be experiencing some sort of oral pain. Likewise, if a rabbit has digestive issues such as cecal dysbiosis, they most probably won’t feed on cecotropes, as they are formed incorrectly.

Another factor why your rabbit is not eating cecotropes can be obesity, lack of physical exercise, or restrictive movement. It makes it difficult for rabbits to reach their bottom and eat cecotropes.

After reading all this information on why rabbits eat their poop, now their behavior doesn’t seem weird, does it?

By default, living beings are attracted to their food source. The odor of human poop repulses us because eating it does us more harm instead. Rabbits don’t eat their regular feces either but enjoy eating cecotropes because that’s beneficial for them.

So, the next time you notice rabbits eating cecotropes, don’t distract them and let them feed peacefully.