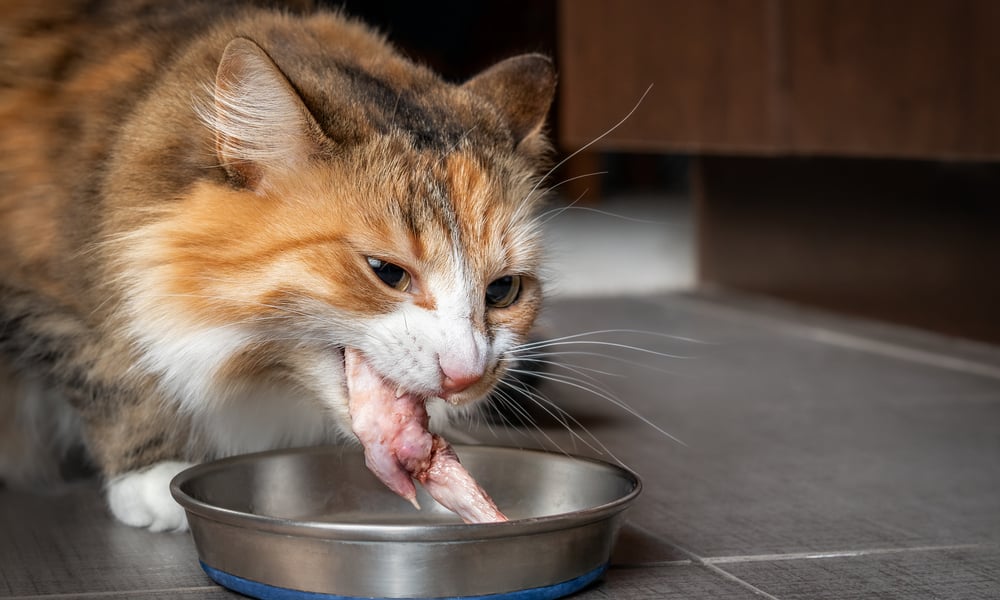 If you are a fan of nature documentaries or are interested in animals, you have probably wondered: why can animals eat raw meat and humans can’t?

From evolution to basic hygiene and health, there are several reasons for this interesting phenomenon.

Read on to discover the interesting reasons why animals eat raw meat while humans can’t.

Humans are generally advised against eating raw meat, except for small meals such as beef tartare, sushi, and rare steak.

Yet, how is it possible for animals to chow down raw meat and not get sick? There are some good explanations for this, and we will take a look at each next.

1. They have special stomach acids and enzymes 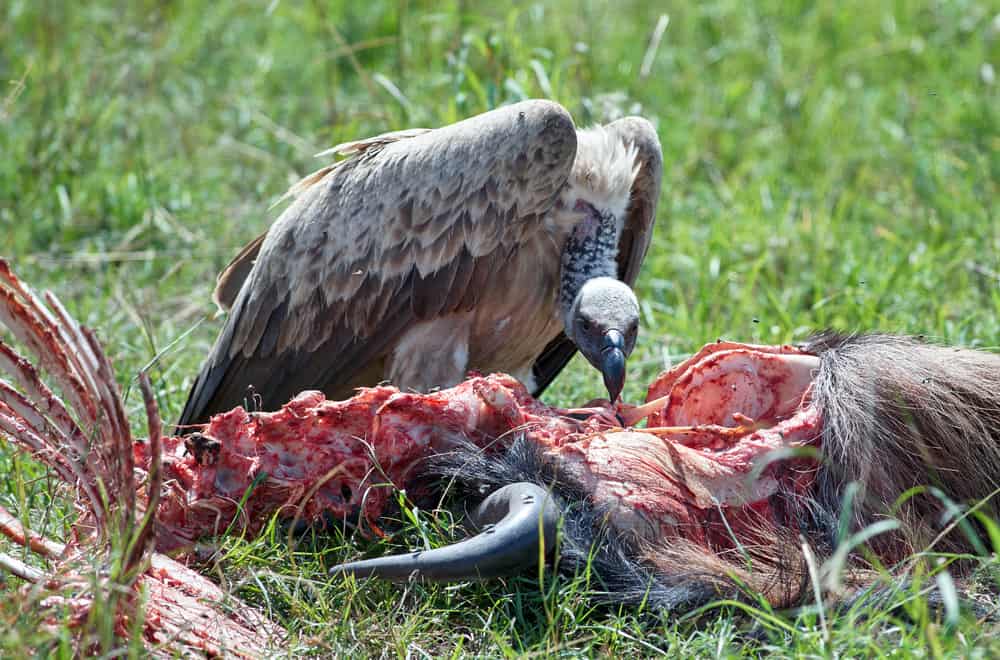 Have you ever wondered how an animal such as a vulture can eat carcasses and rotten meat and still live another day?

That’s because nature has created a sterile environment in the vulture’s stomach, a quality that we humans lack.

Many other animals, including the vulture, boast a stomach that is well lined with potent acids that can instantly kill harmful parasites and bacteria found in raw meat.

I should note here that these special acids and enzymes are not present in all animals. In fact, many animals do fall sick from eating raw meat.

It is common for young animals to die after consuming raw meat. This can be attributed to the young one’s weak immune system.

2. Their Immune System is Well-Adapted 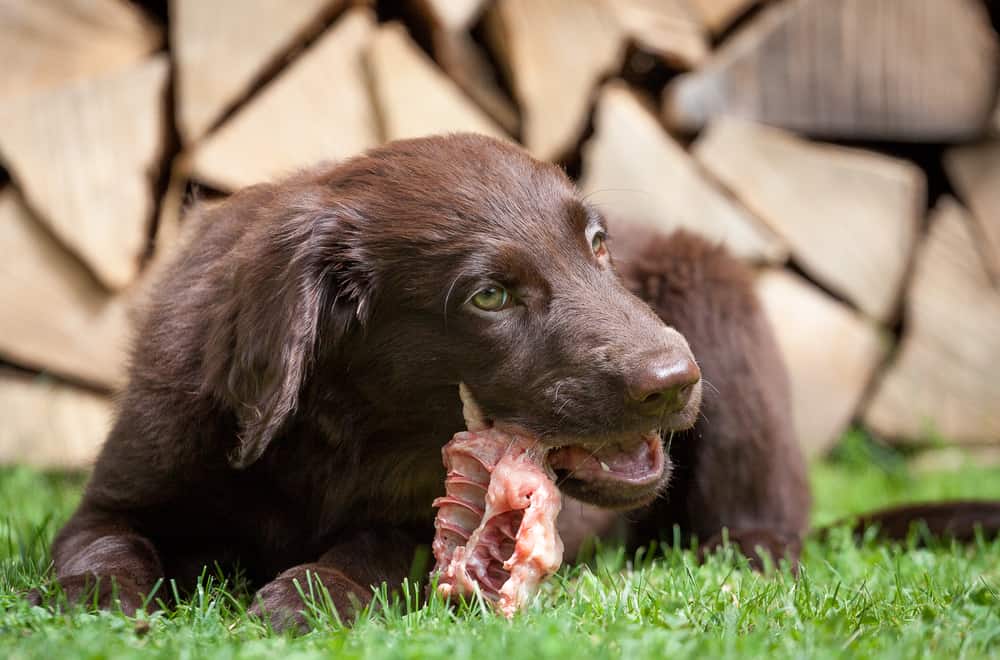 The immune system of animals evolved differently from ours, enabling these beasts of the wild to tolerate otherwise harmful bacteria and parasites better than humans can.

Animals’ immune system is not necessarily better than that of humans. It just means that their system is better adapted to the wild environment where all sorts of dangerous parasites, bacteria, and viruses thrive.

Like humans, each animal has a unique immune system. Some have a strong immunity that can fight off dangerous pathogens found in raw meat. But, some animals’ immune system is not well-adapted to protect the body against harmful parasites and bacteria.

For example, vultures can eat rotten raw meat, and nothing happens to them. But, if a lion were to dig into a gazelle’s decaying carcass, it would very likely fall sick. 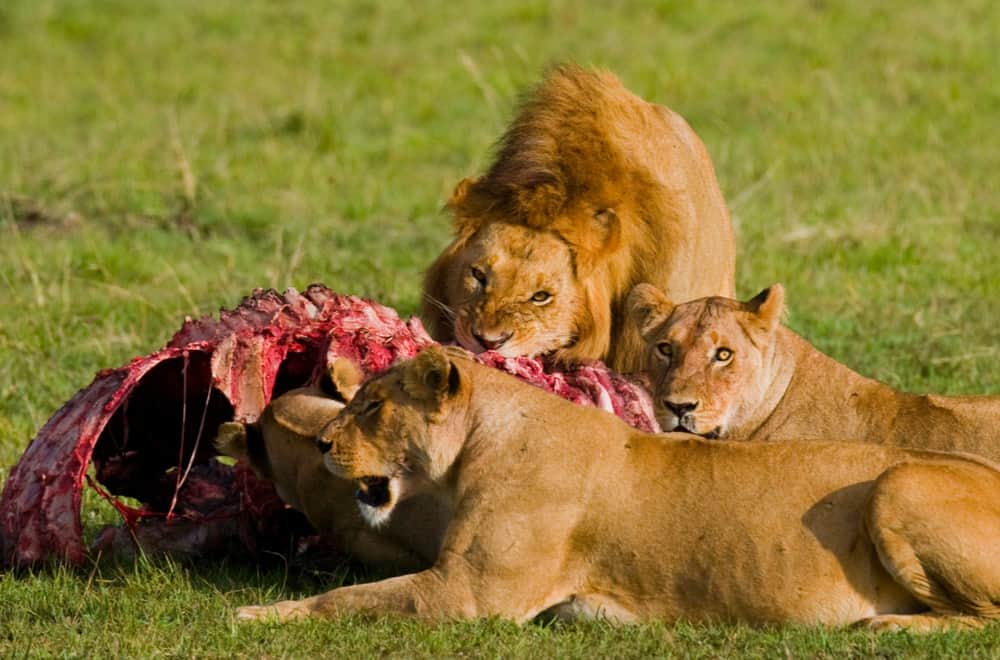 Think about it for a minute, when you buy meat in the deli, those lamb chops or T-bone briskets are part of an animal that has been dead for a long time, probably a few days.

When the meat is lying at the deli, it has likely picked up bacteria, and eating that meat raw can be extremely dangerous for the human body. Thus, we opt to cook it to minimize our chances of dying from disease.

On the other hand, animals mostly eat their meat fresh as soon as they hunt down and kill their prey. This doesn’t mean fresh meat doesn’t have bacteria; it likely does, but not in the amount as when raw meat is stored for even a few hours.

4. It is Part of The Evolutionary Mechanism 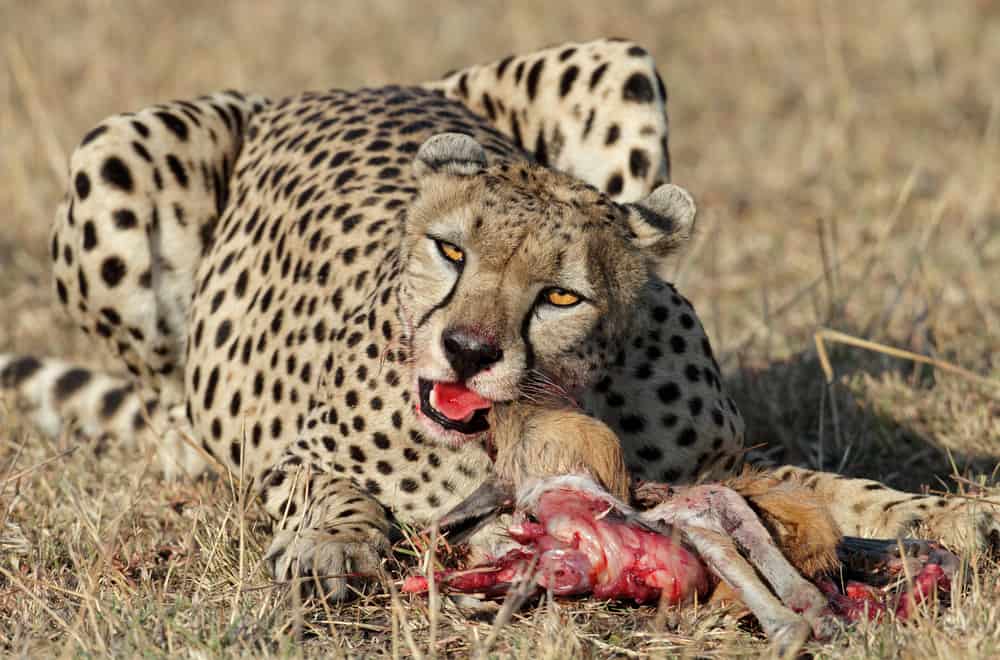 Lions, cheetahs, tigers, and other wild carnivores cannot cook or store their meat safely. As a survival mechanism, they end up eating their meat as soon as they kill their prey.

Humans have evolved and adapted to their environment over thousands of years and devised ways to store their food to prevent sickness that would otherwise wipe out our species.

As part of our endeavor to evolve and attain ultimate efficiency, humans moved away from chewing their meat raw to cooking it to save time and energy.

It is widely documented that early humans ate raw meat routinely. But this also meant they spent hours scavenging for food, spent additional time tearing the meat off the bone, and chewing it enough to be safe for swallowing.

After eating your share of raw meat, you would then have to lie down for several hours for the body to work extra hard to digest the raw meat. Breaking down raw meat takes much longer than digesting cooked meat.

As part of evolution, humans also developed a strong repulsion for raw meat. The discovery of fire was a godsend. It introduced humans to the irresistible, mouthwatering smell and taste of charred protein, and from then on, humans were hooked!

Why should we spend so much time and energy eating and digesting raw meat, not to mention tolerate the repulsive smell and taste of bloodied raw meat when we can grill, fry, or bake meat?

From an evolutionary point of view, eating raw meat is simply not the most efficient use of our time.

5. Animals Have A Better Sense of Smell 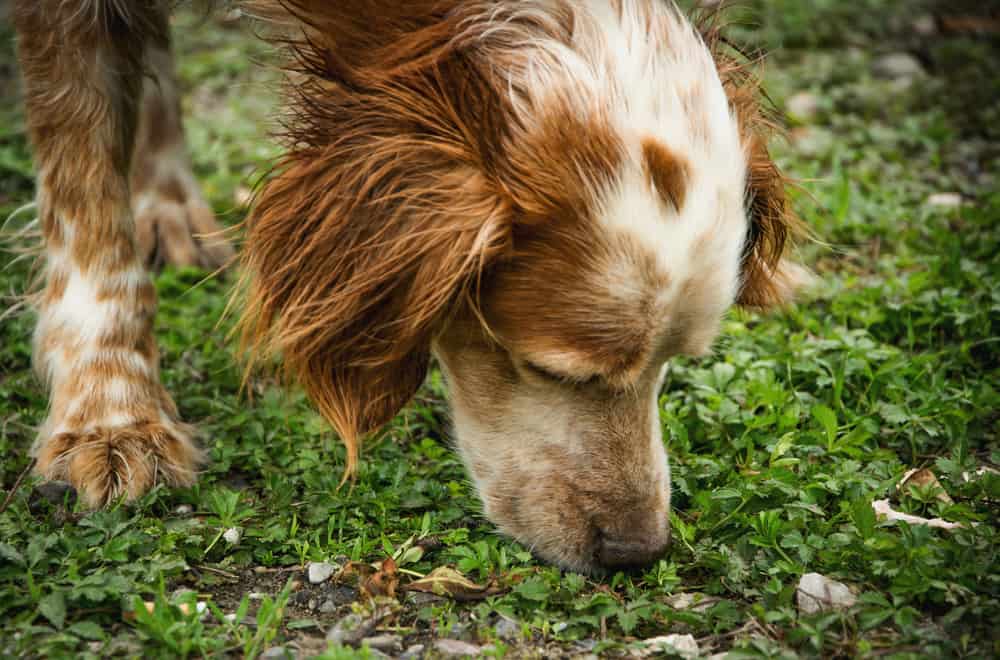 Even though animals are not as evolved as humans, they score well on some qualities, such as smell. When well-socialized, a dog can smell a harmful substance from many miles away.

The strong sense of smell is why they use canines, not humans, to sniff out banned substances at the airport or crime scenes.

Animals in the wild have an equally strong olfactory system compared to ours. Interestingly, a tiger can quickly and easily sniff out contaminated meat and stay away from it.

So, animals can eat raw meat and still be fine because they have become good at separating good meat from the bad type by smelling. 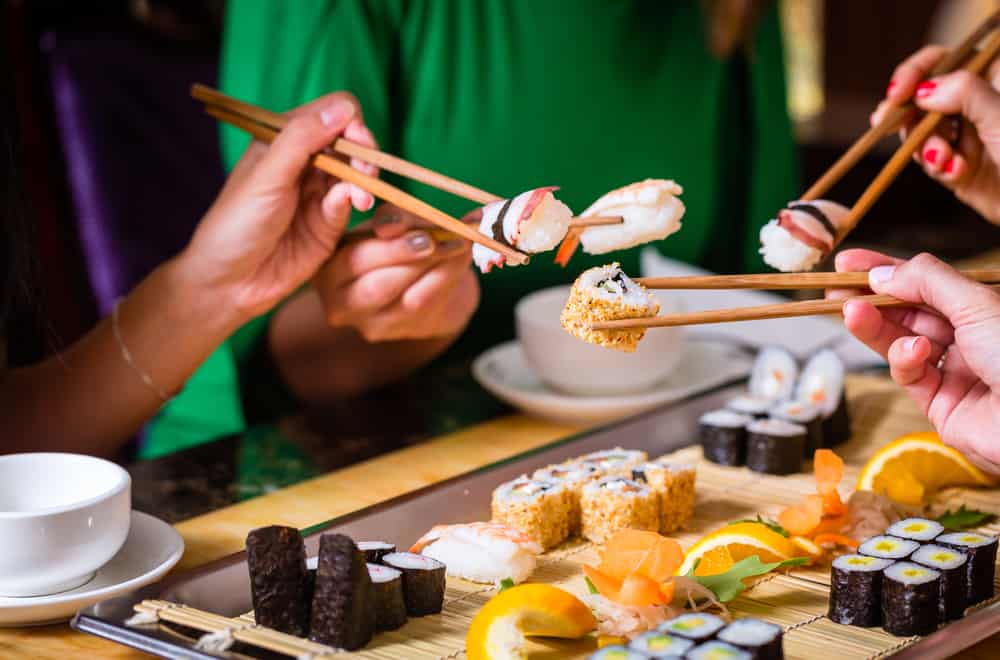 Technically, humans can eat raw meat. There are still many communities that devour raw meat routinely, but such tribes are few and far between.

Even in those communities that eat raw meat, they have ways of ensuring the meat is safe for consumption. For example, they might smoke it slightly or add preservatives believed to kill harmful bacteria.

That said, you can go to some modern restaurants to enjoy a meal of raw meats. Popular delicacies constituting raw meats include tartar, carpaccio, sushi, basashi, and raw steaks.

Many of these delicacies are made from beef or fish, which are pretty safe to eat. But, make sure the restaurant from where you buy them has high hygiene standards. As a general rule, the poor handling of meat and meat products can result in contamination and a serious risk of disease.

While we humans can eat raw meat, you should avoid eating raw chicken and pork. These meats are easily contaminated and can contain large amounts of salmonella bacteria.

It is important to thoroughly cook your chicken and pork dishes to avoid potentially fatal bacterial infections from undercooked meat.

Can You Feed Your Dog Raw Meat?

Most people believe dogs love raw meat and have no qualms throwing their canines chunks of fleshy, uncooked meat.

Dogs are descendants of wolves, which have no problem chowing down any meat. However, domestic dogs lack the same immunity and digestive system as wolves to tolerate raw meat.

This doesn’t mean dogs can’t eat raw meat. Technically, they can. But, you must be very careful with feeding your canine pet raw meat regularly.

Raw meat, and especially chicken and pork, contain harmful bacteria such as listeria and salmonella. Like in humans, these bacteria can make your canine buddy very sick.

Some dogs can eat raw meat, and nothing would happen to them. Others, especially puppies and younger dogs, might be allergic to chicken meat.

If you really must feed your dog with raw meat, start with a small quantity and increase while keeping a close eye on Fido.

Aside from the risk of bacterial infection, feeding your dog with raw chicken can result in fatal choking. Chewed chicken bones can splinter and get stuck in the dog’s mouth.

Most kibbles in the market are enough for your dog’s nutritional needs. But if you want to treat your pup to a homemade meal of meat, the safest bet is to cook the meat thoroughly. If you opt for chicken, be sure to debone it before feeding your canine buddy.

Summary: Why Can Animals Eat Raw Meat and Humans Can’t?

This is a curious question, and as you can see, there are many plausible reasons why animals can eat raw meat while we cannot.

The bottom line is, animals, with the special acid and enzymes in their stomach, well-adapted immune system, and strong sense of smell, are evolutionarily suited to eat raw meat without succumbing to life-threatening diseases.

For humans, eating raw meat is really not in our best interest. Not only does cooked meat smell and taste better, we simply do not have the time and energy to sit around struggling to bite into and then digest raw meat.

1 thought on “5 Reasons Why Animals Can Eat Raw Meat, But Humans Can’t”