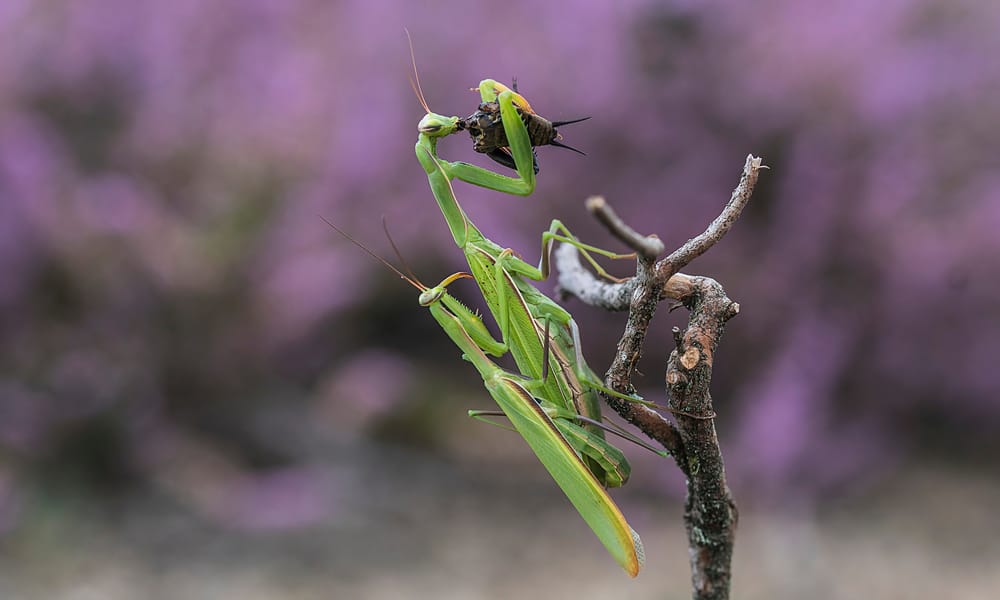 Humans are not the only creatures who make the promise of ‘loving till death’. In the praying mantis world, this phrase takes quite a literal meaning.

After mating, female mantises eat their partners. This paradoxical behavior perplexes many of us. So, if you’re mind-boggled by the fact and trying to find out why this happens, you’re at the right place! 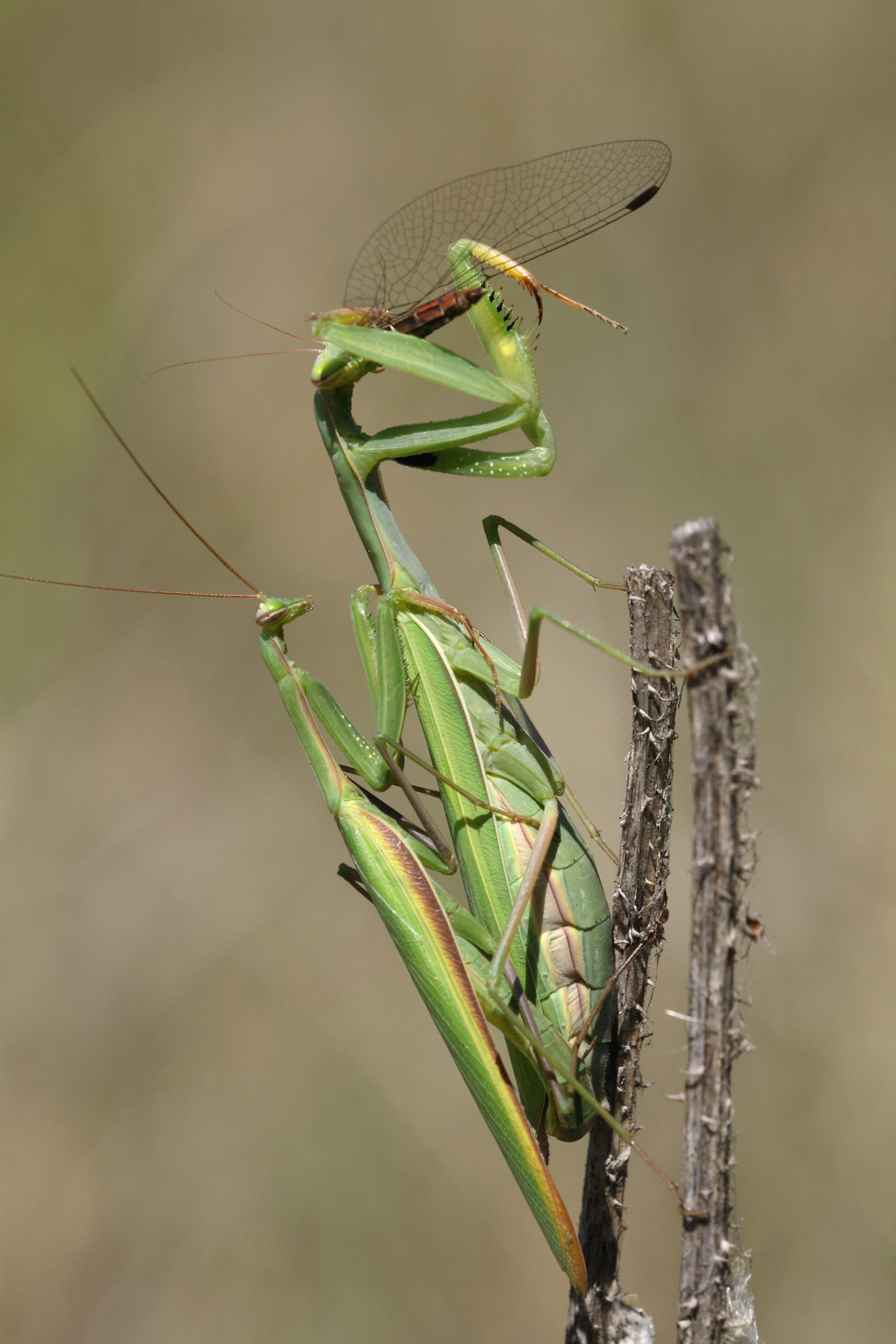 Sexual cannibalism is the phenomenon in which some female organisms devour their male partners before, during, or after mating. This trait has been witnessed in several arachnoids and insects.

Scientists have long speculated a few hypotheses on why this phenomenon occurs. The reasons behind and the advantageous outcomes vary depending upon the species.

Why Does Female Praying Mantis Eat The Male? 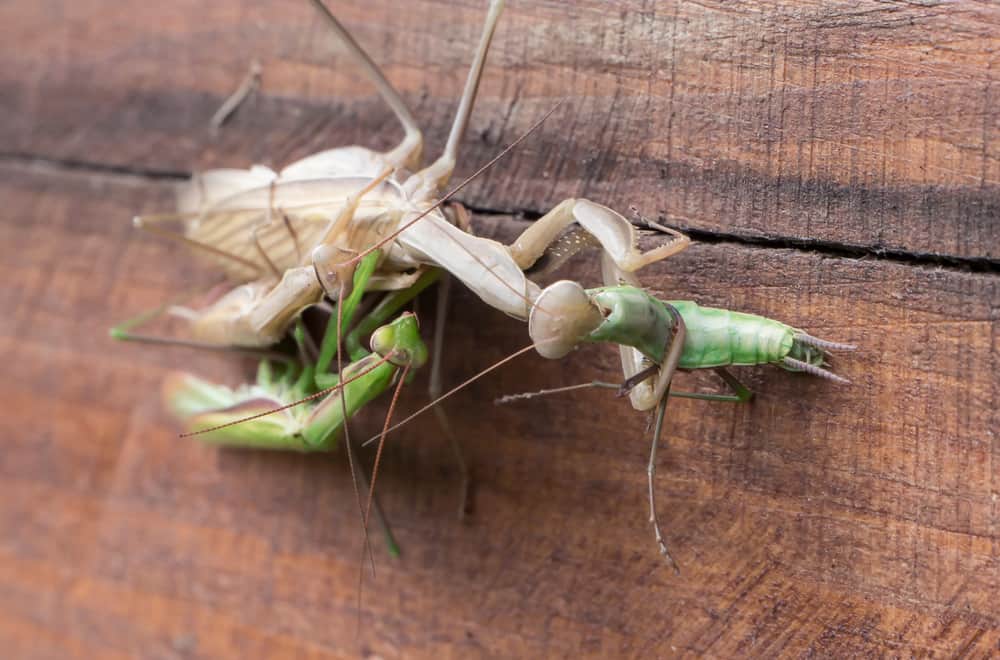 In a research paper published in 2016, it has been found that in praying mantises Tenodera sinensis, eggs and reproductive tissues in females who fed on their partner interestingly had much more male-derived amino acid in comparison to those females who let their mates live.

Thus, as male somatic tissues evidently partake in increasing the fecundity of females and invest significantly in offspring, around 63% of female mantis’ diets consist of male partners during breeding seasons.

Moreover, this study has proved that the male somatic investment allocation to female mantis’ eggs and ovaries increases with the increasing size of the males.

Also, just as in Tenodera sinensis, the other two mantis species Hierodula membranacea and Pseudomantis albofimbriata, have displayed a significant increase in females’ fecundity.

So, as cruel as it might sound, it might be a good idea for male mantises to get eaten by their mate, at least from an evolutionary point of view. Mantises have a short lifespan, of just a few months. So, even if they die, their DNA lives on in their healthy offspring.

Why Did This Behavior Evolve?

Evolutionary beneficial behaviors are often always encouraged and evolved. So, sexual cannibalism also might have some advantageous reasons backing it up.

Here are four hypothesized explanations on why sexual cannibalism occurs. A few of them suggest that males pay the price in order to ensure better survival for its offsprings.

Hungry females cannibalize smaller genetically inferior males in some species and then copulate with healthy and genetically strong males.

Like almost any other scientific hypothesis, the adaptive foraging hypothesis is not devoid of criticisms either. Scientists have found that these male species are nutritionally not as rich as crickets.

However, in a sexually cannibalistic spider species, Hogna helluo, males have been found to contain various important proteins and lipids, beneficial for female’s fecundity, that other prey such as crickets lack.

According to this hypothesis, dating is a scary process for males in cannibalistic species. Females cannibalize those males who they deem unfit for them.

Smaller males, who are often cannibalized, display a lower level of aggressiveness and fitness, i.e., they are weak and are deemed genetically weak. Thus, in many species, males impress their to-be mating partners with higher hostility and courtship dances.

In an orb-weaver spider, Leucauge mariana, females devour their partners if their sexual performance is poor and the sperm count is too low.

So, the mate choice hypothesis implicates that if a female doesn’t find the male trying to impress her for copulation fit for her fecundity, she will cannibalize them and mate with a fitter and often a bigger partner instead.

According to the aggressive spillover hypothesis, the more the female is hostile and fast when attacking prey, the more are the chances of her cannibalizing the mating partner.

To be more precise, unlike some other hypotheses where sexual cannibalism is considered to be of advantage to female organisms as the genetically superior males are supported, this hypothesis implicates that it totally depends upon the female aggression that determines if or not the female devours their partners.

This hypothesis further suggests that such cannibalistic aggressiveness in females decreases in a female-dominated environment, as there’s a competition to find a viable mate in such environments, and such hostile behavior might result in repulsing the males.

Unlike the above hypotheses, the mistaken identity hypothesis suggests that females cannibalize the males, often pre-mating, without having any prior knowledge of their sexual capabilities.

In this case, a female fails to realize that the male around her is trying to court her. One can witness this behavior in insects with prevalent pre-mating sexual cannibalism. The female doesn’t allow males to offer a courtship dance and attacks and cannibalizes them instead. 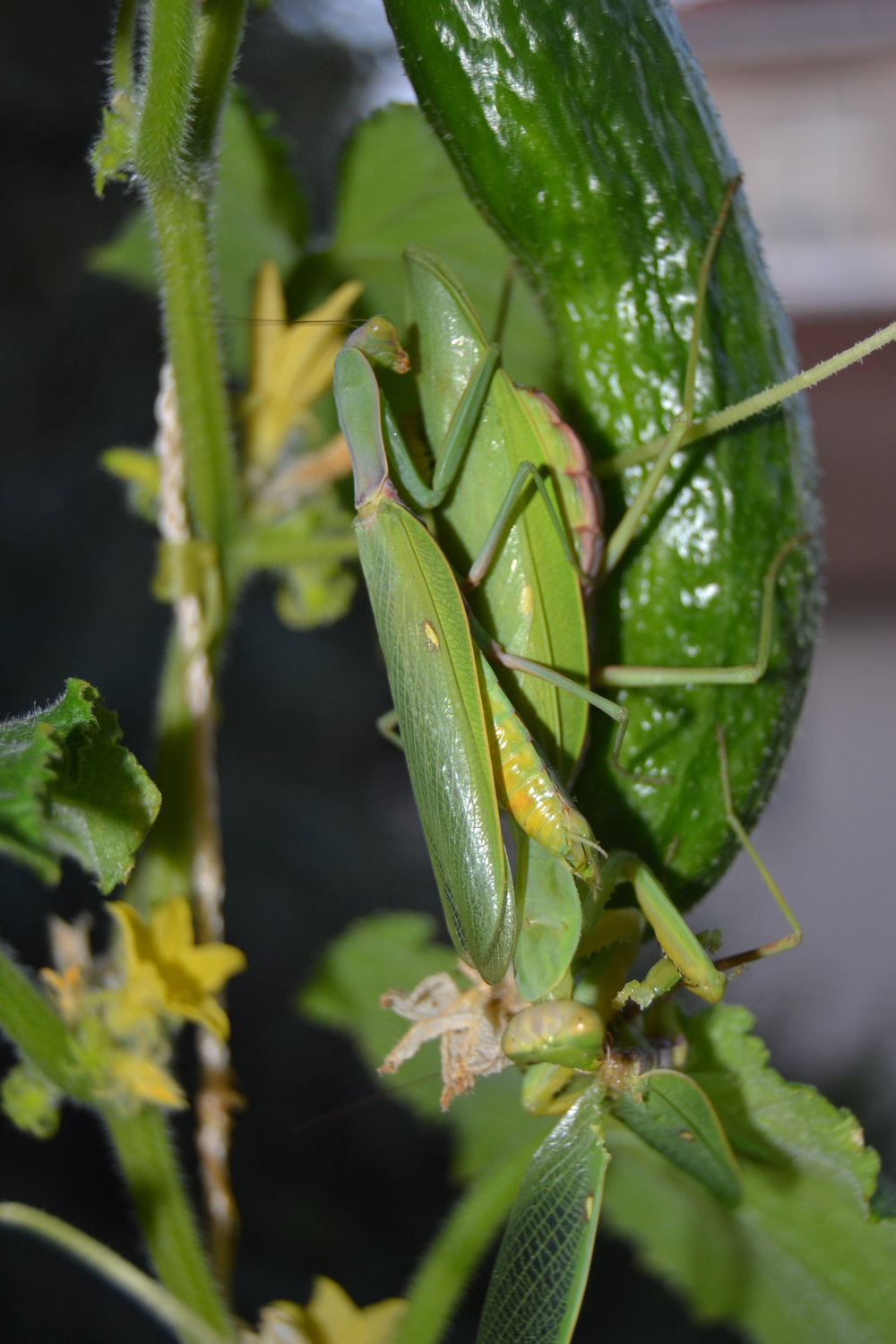 Many believe that praying mantises’ love stories always end up in a macabre. However, that’s just a rumor, and many male mantises live long enough to mate and pass their DNA to offspring with more than one female mantis.

Many scientists claim that it simply depends upon the hunger level of the females. In an experiment conducted in 1994, where the males were introduced to well-fed and starved female mantises.

The result of the experiment was found to be different from what was believed. Only starved female mantises were found to involve in cannibalism.

As per the male investment in female eggs and reproductive tissue, it was found to be impressive, despite sexual cannibalism not being involved.

So, as male mantises are one of the biggest prays they feed on, large starving females are found to cannibalize, with or without any sexual activity between them.

Also, a two-year-long study conducted by an Entomology student of the University of Central Arkansan, Kyle Hurley, found that only one in 45 cases involved sexual cannabilism, where the females first decapitated their mates pre-mating. The majority of cannibalized males were small.

Moreover, another mind-blowing observation was that in one in 45 cases, males cannibalized females instead. So, a variety of factors seems to be playing a role in mantis cannabilism.

However, one thing is certain that, unlike the popular notion, sexual cannabilism is not 100% mandatory action in mantises.

How Do Male Mantises Avoid Being Eaten Post-mating? 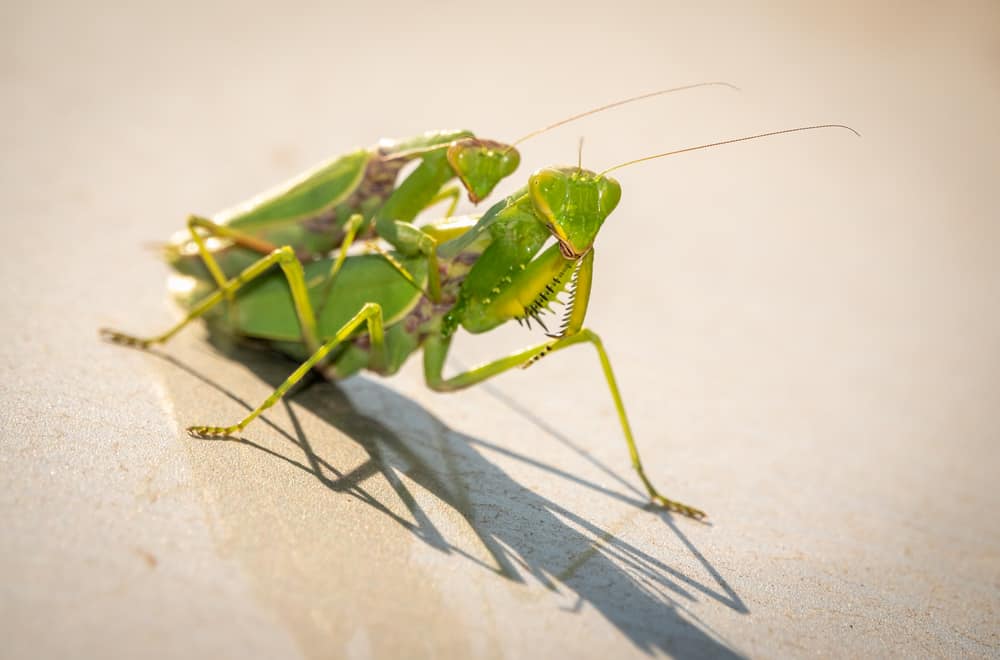 Not every male mantises are evolved to be a martyr. Some try to and indeed escape their decapitation during the romance. There are a few ways by which the males try to do so.

In a praying mantid species, Pseudomantis albofimbrata, males are often witnessed to approach their possible female mates by slowly approaching them from the front or slowly mounting them from the back.

In a study performed in Australian mantis, P. ablbofimbrata, a few cases of opportunistic mating were also observed.

Opportunistic mating is when the male waits for the females to be distracted or well-fed before copulation. In this type of avoiding mechanism, males in many species are also known to present distracting gifts to females in order to prolong copulation.

In order to escape their partner’s cannibalistic behavior, males pin down their mates to violent struggles. This strategy is believed to be recently evolved among male mantises in the scientific community.

Males strike the females with speed and strength and grab them with their serrated raptorial forelegs before female mantises attack them. According to a study, when the males did so, they stood a 78% chance of survival.

If the wrestle is more violent and the males are able to inflict deeper wounds to females, then the likelihood skyrocketed to 100%.

So, if we look at all these male defence mechanisms, and the fact that males are at a clear loss during sexual cannibalism, it seems like this phenomenon is a female-plotted strategy.

Many humans believe loving is painful. And it seems like many male mantises would also agree to this notion.

By now, we know what the possible reasons why female mantises devour their beloved partners are. We also know that their love story doesn’t always end in tragedy as males try their best to fight for their life.

So, the next time you see a mantis couple, realize that their relationship also has its fair share of struggles, like every other relationship on this planet.