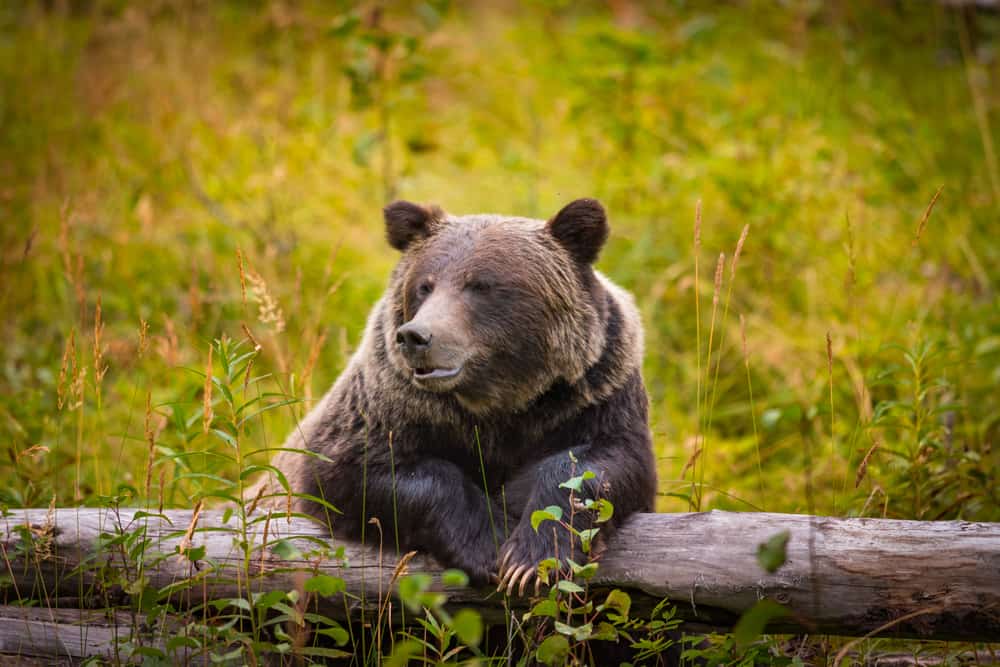 With their immense power, high intelligence, and sensitive senses, grizzly bears make it to the list of the most commanding creatures in the wild. Due to their remarkable features, they are often unmatched in terms of hunting.

Every day, grizzlies have to treat themselves with a lot of food. And when we say “a lot”, this includes plants, animals, and everything in between! So, what do grizzly bears eat? Here’s everything you ought to know about these giants, particularly about their diet and behavior.

The Physical Characteristics of Grizzly Bears 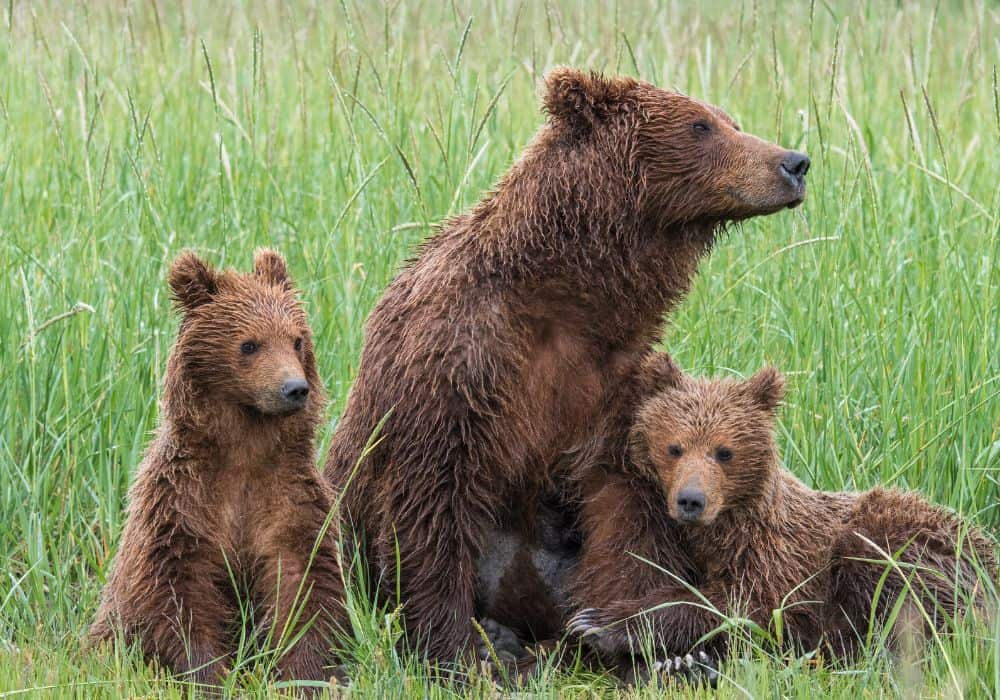 Grizzly bears are known for their muscular backs, pointy teeth, and long claws. Their long claw gives them the extra force to prey on smaller animals and dig food easily.

It’s easy to spot a grizzly bear because of its large body and dominant color. In most North American territories, grizzly bears refer to smaller brown bears with slightly grizzled colors, hence their name―grizzlies.

Their color ranges from light tan to dark brown with a hollower and shorter facial shape. They have round ears and an enormous, sensitive nose that allows them to expertly collect scents and interpret the odors. With their massive olfactory bulb, their sense of smell is 300x better than humans!

Aside from these features, grizzlies have a big shoulder lump. The lump in their shoulder is a pivotal part of their daily life as it contains a mass of muscles that give them a multitude of strengths. Accordingly, females can weigh up to 315 kilograms while males can reach up to 770 kilograms.

Over the years, grizzlies have been associated with other subspecies from the coastal areas, which are the brown bears or the Ursus arctos.

Grizzly bears are heavier compared to black ones. However, they can quickly run, making them exceptional runners. With a speed of 35 mph up to 40 mph, this makes them one of the fastest species of the Ursidae family. They can also climb trees, though not as good as black bears.

In addition, these large species are well known to be hungry omnivores. In fact, they won’t hesitate to eat something, especially if they are very hungry. They are very effective foragers and are often more aggressive than black bears because of their build, weight, and natural instincts.

Compared to black bears, grizzlies are less willing to run from a threat. In this regard, many believe that one grizzly bear may be equivalent to several black bears! In addition to that, grizzlies can be very unpredictable, particularly sows with cubs.

Adult sows may act very hostile, even towards their own species, if they consider something a threat. And when communicating, female grizzlies tend to groan. This is also evident when they mate. Meanwhile, male bears fiercely fight each other for the opportunity to couple with receptive females.

In winter, grizzly bears hibernate and retire to their dens. During this period, they tend to sleep a lot because their heart rate slows down and their breathing significantly drops. Their hibernation could last from 4 to 7 months, depending on the temperature and food shortages.

Grizzly bears have an extreme geographic distribution, covering over 200,000 populations across the world. They remain abundant in Alaska, Canada, and northern America. In the United States, these species are protected by law.

The Endangered Species Act of 1973 primarily protects species like grizzlies from endangerment and extinction. As a result, these animals continue to thrive in many forests, woodlands, prairies, and alpine meadows. Some also occupy riparian areas so they would be much closer to streams and rivers.

While the conservation of grizzlies is dubbed a success story, there’s still a significant change in their habitat. In the past, the well-known territory of grizzly bears is in the western coastal strip of Canada. But in recent years, there have been more sightings of these giant species in Canada’s northern Arctic region.

Researchers believe that migration is primarily caused by climate change as well as human settlement. On the bright side, this relocation may be considered more favorable for these large creatures, especially since they can easily adapt to colder temperatures.

What do grizzly bears eat? 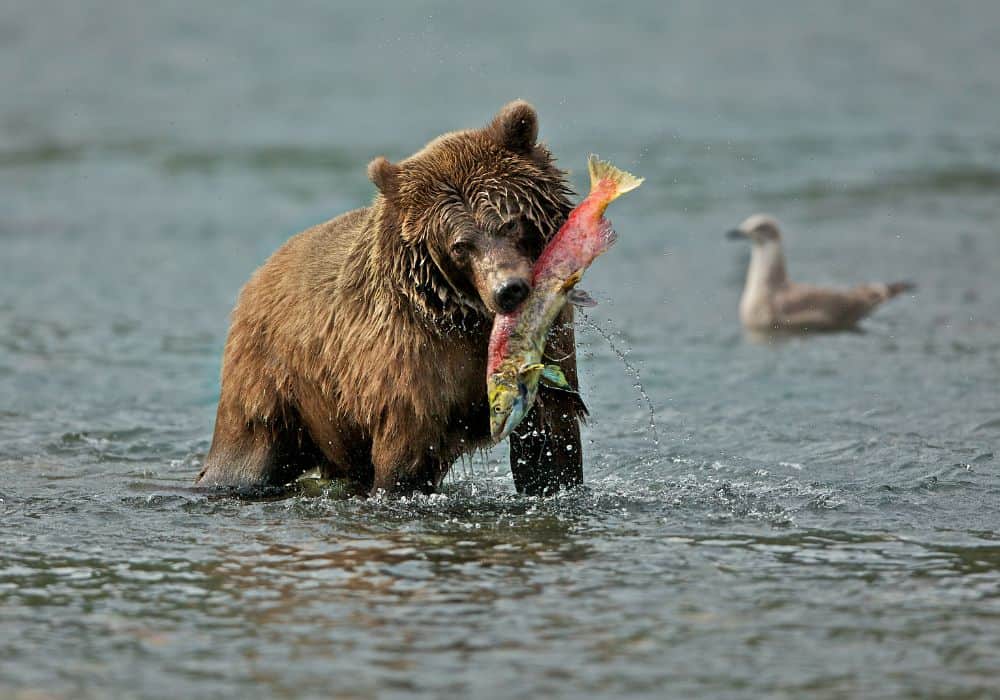 Grizzly bears have a significant advantage when it comes to food hunting. They use their excellent sense of smell so they can freely wander around the wild and look for something to eat. This makes them among the deadliest hunters in the wild.

Since they are generally omnivores, grizzlies consume all sorts of food. These cover a wide variety of plants and animals, depending on their hunger. And because of their scavenging traits, these powerful creatures also feed on carcasses.

In some areas, grizzly bears prey on various fish species, particularly salmon, bass, and trout. Since they are omnivores, they also take nourishment from hoofed animals, including deer, elk, moose, bison, and caribou. They eat ground squirrels and other smaller rodents as well.

At times, grizzlies feast on domestic livestock, taking delight in sheep, goats, and cows. Consequently, their rampage can affect negatively impact farmers who keep livestock as their business.

What do baby grizzly bears eat? 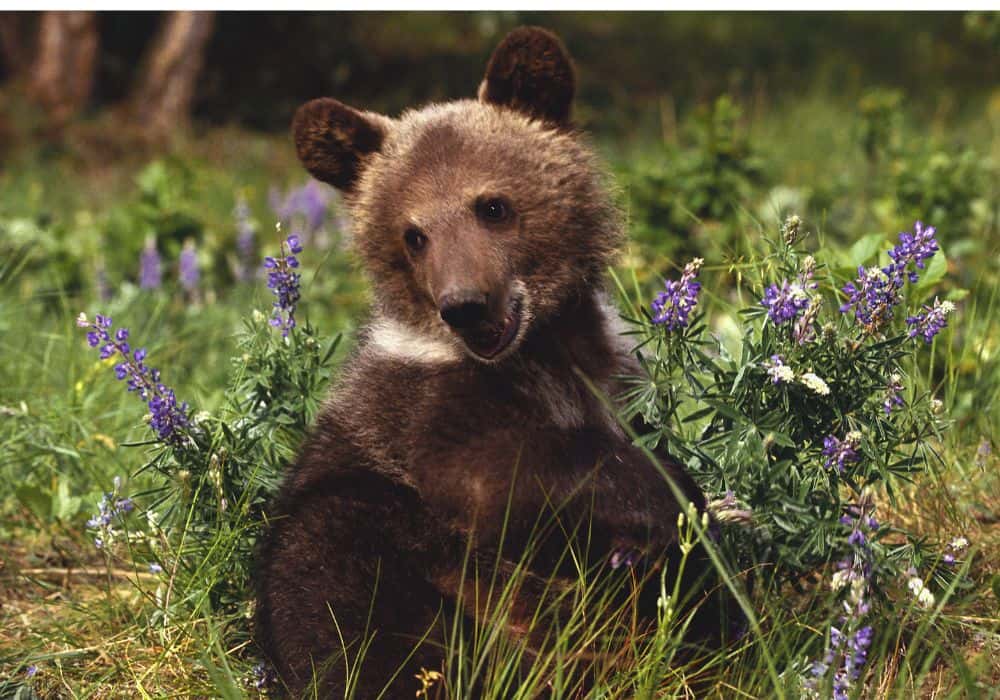 It should be noted that baby grizzly bears are birthed during the adult sows’ hibernation period, which is winter. At this time, they don’t eat, drink, urinate, and defecate. Therefore, cubs only depend on the nutrition of their mother’s milk.

After winter, when they are strong enough to be out in the wild, younger grizzlies slowly eat solid foods. Just like adults, they feed on plants and fruits. Berries, perhaps, are their favorite treat, along with tubers, roots, grass, flowers, sedges, and broad-leaved herbs.

They also love to savor smaller creatures like fishes, rodents, moths, and insects. And with the guidance of their mothers, they can eat small portions of moose, deer, elk, goats, and other mammals. Surprisingly, grizzly bear cubs grow quickly. They can reach up to 90 kg in just one year of their life cycle!

How much do grizzly bears eat? 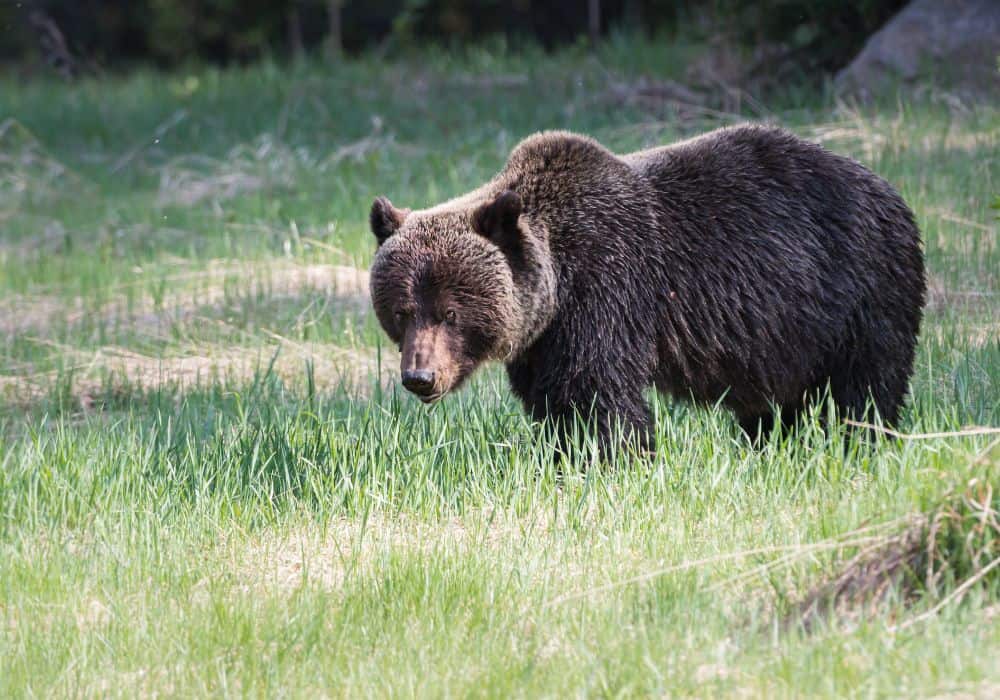 Of course, it shouldn’t come as a surprise that grizzly bears have a very large appetite. They eat almost everything under the sun, particularly foods that are easily available and accessible in their ecosystem. And the major reason why these brown bears devour large meals is due to their scheduled hibernation.

Since they could not eat during this period, they need to feast on as many foods as they can and get the needed nutrition to serve them until the end of winter. Meanwhile, during their active season, they can eat up to 40 kg a day. And because of their immense food consumption, they gain at least 1k per day!

As experts when searching for food, grizzly bears make use of their long fangs and sturdy morphology to exert extra force on their prey, tearing them through the flesh. These powerful features also allow them to dig resources in the soil, which is why they love root plants and even rodents.

Furthermore, their eating habits are largely influenced by the seasonal variation and availability of food. During spring, they primarily eat large mammals like elk and bison. Come summer, they relish leafy options. When fall takes place, they enjoy some juicy root plants and berries.

Another special eating trait of grizzlies is they can be very violent when eating. Their biting force may be doubled if they feel threatened. So, be sure to avoid bear encounters as much as possible. If this happens, you have to assess the situation carefully.

As mentioned, grizzlies are more aggressive than black bears. Therefore, you have to show you are not a threat to them. Get into the fetal position and wrap your hands on your neck. Doing this gives you a 99% chance for the bear to leave you.

Over the years, the population of grizzly bears has dramatically increased, especially in the US. In fact, since we are living in the same territory as them, they can freely roam around in the wild, increasing the possibility of meeting them face to face.

While humans are not part of their diet in general, we may fall as their prey in rare circumstances. So, it’s very important to be alert at all times. Always take into account that these large animals are top predators.

Absolutely! They especially love calves, aged from birth to around 2 months old. Depending on their build and fastness, they can also tackle an adult moose with just one bite!

2. Will a grizzly bear eat a human?

In general, grizzly bears do not eat humans―however, they are capable of killing one, especially if they feel threatened.

Yes! These wild creatures are opportunistic feeders and commonly take advantage of resources that are readily available to them. So, they almost eat anything, even your favorite trail snacks, and livestock food!