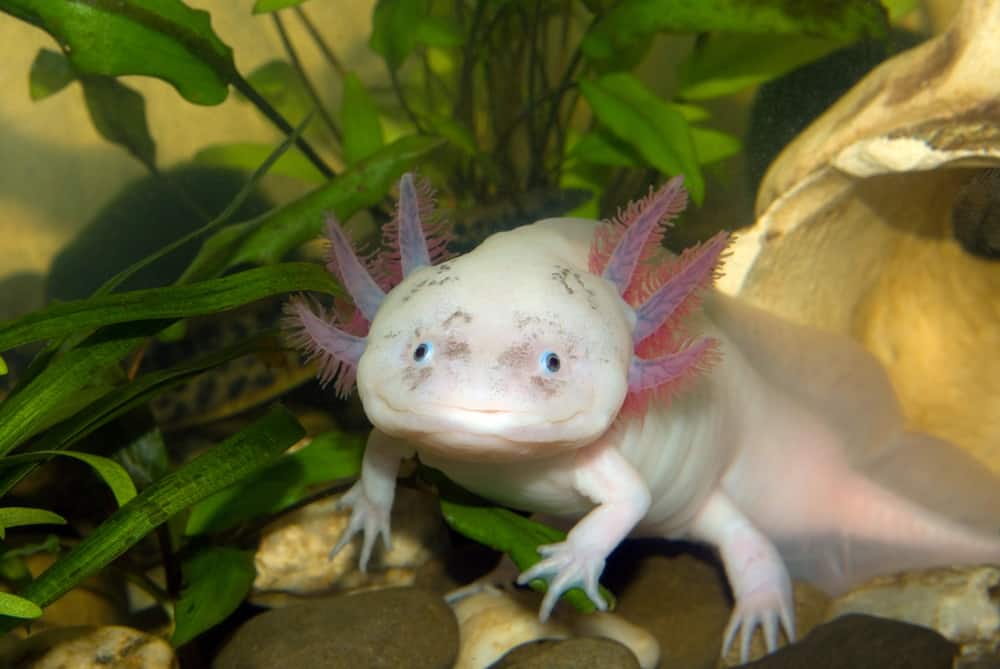 Have you ever heard of axolotls? Though their name is quite jargon, you may have come across these adorable amphibians while scrolling your social media feed. Get to know more about the Peter Pan of the paedomorphic salamander family and have an idea of what axolotls eat.

The Physical Characteristics of Axolotls 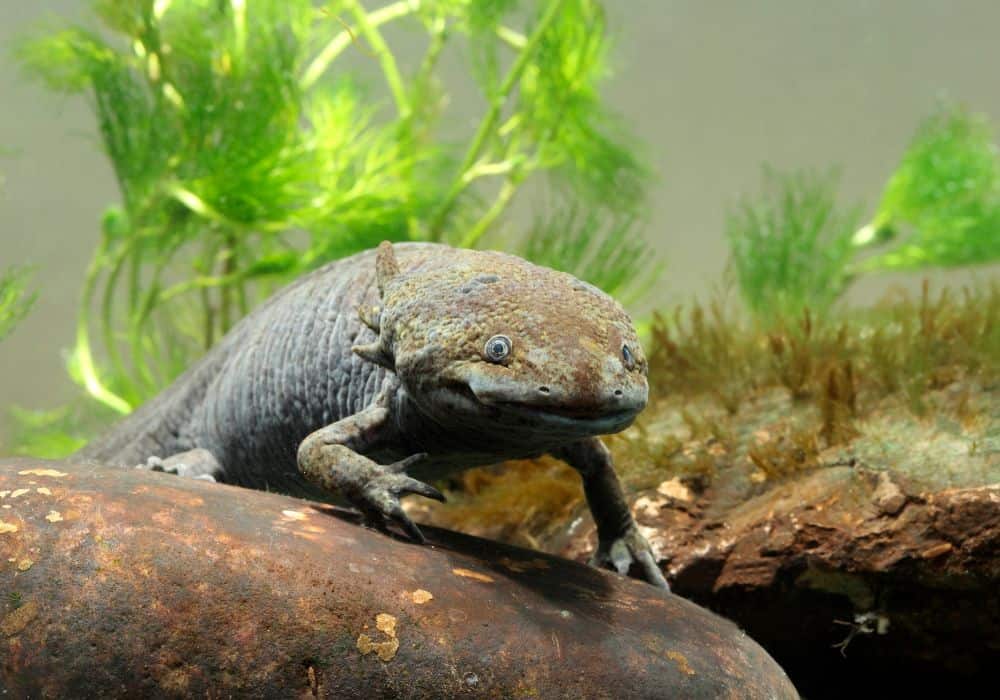 While salamanders in general are dark-colored with slim bodies, short limbs, and long tails, axolotls are quite unique in appearance. Well, thanks to their chubbier body and iconic feathery gills! And of course, you can’t miss their slightly broader mouth that easily transforms into a radiant smile.

There are five basics colors among axolotls:

The ones shown in the media are mostly translucent white with pink gills. These are axolotls that are primarily kept as pets. On the other hand, wild axolotls have dark brown features. Because of breeding practices, these led to even more distinctive color morphs, which makes axolotls rarer and more desirable.

As to their build, axolotls have an average weight of 2.11 to 8 ounces and a size of up to 12 inches. In addition, their physical features are relatively like that of a teacup, adding up to their charms!

Legend says that the axolotl was Xolotl, the Aztec god of fire and lightning who later disguised himself as a salamander to elude being sacrificed. But scientifically speaking, axolotls are part of the Ambystomatidae family and is closely associated with salamanders.

They are known for their feathery gills, which they use to smoothly swim under the water. Because of this, they are often mistaken for fish. Unlike other amphibians of the same kind, they do not undergo metamorphosis.

They also have another distinct feature, and that is the ability to regenerate their limbs, organs, tails, and other body parts naturally. This unique attribute was said to occur since they are neotenic, which allows them to retain some aspects from their embryonic phases.

Accordingly, axolotls are sometimes called creatures that never grow up. These remarkable properties, unfortunately, made them a common specie for laboratory experiments focusing on tissue growth.

Their growing fame arose not just because of their distinct features but also with their appearance in the ever-popular Minecraft. As a result, you can find them in many labs and pet shops.

In general, axolotls stay in the water. They once flourished along the banks of Lake Texcoco, which is a natural lake found in the Valley of Mexico. The area was a significant place among the Aztecs because it was the location where they built the ancient city of Tenochtitlan.

In the past, axolotls thrived and topped the food chain―but not until the recent decades. Within their habitat, many predatory fish species like tilapia and perch took up their spot. This eventually led to the decline of their population.

Another key reason for the decrease of axolotls is due to pollution. City developments negatively impacted their habitat. That is why many scientists believe that these animals may already be nearly extinct or even extinct in the wild.

The average life span of these lizard-like species when in the wild ranges from 10 to 15 years. And despite the fact that axolotls are considered critically endangered species, they are widely bred in captivity. Surprisingly, they are one of the most popular pet amphibians around the world.

What do Axolotls Eat? 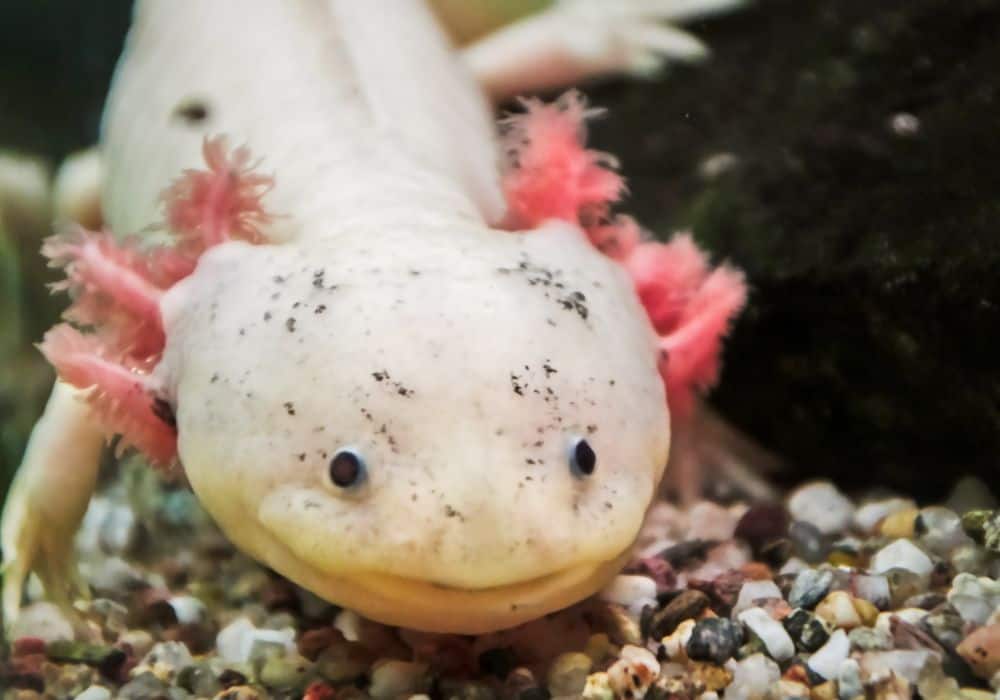 Captive axolotls are species that are bred, which could either be those kept as pets or medical samples for labs. Since axolotls are originally from the wild, experts suggest that it’s best to replicate their natural diet. Giving them the same assortment of protein-rich food ensures them to be healthy.

Axolotls are primarily carnivores. They survive on a variety of diets, including insects, worms, tadpoles, crustaceans, and small fish species. So, you can feed them with brine shrimps, earthworms, blackworms, and bloodworms.

Daphnia is also highly recommended, which is a tiny planktonic crustacean that often resembles that of a water flea. Live food is the best option, though you may substitute it with lean pieces of chicken and beef at times. It’s because too much live food can cause the reproduction of parasites within their body.

Freeze-dried pellets are a great alternative for live food as well. These are much healthier and easy to eat. However, you need to make sure that the substrate consists of limited gravel or smaller pieces of rocks. Bigger pebbles should be removed since axolotls unknowingly ingest them together with the food. 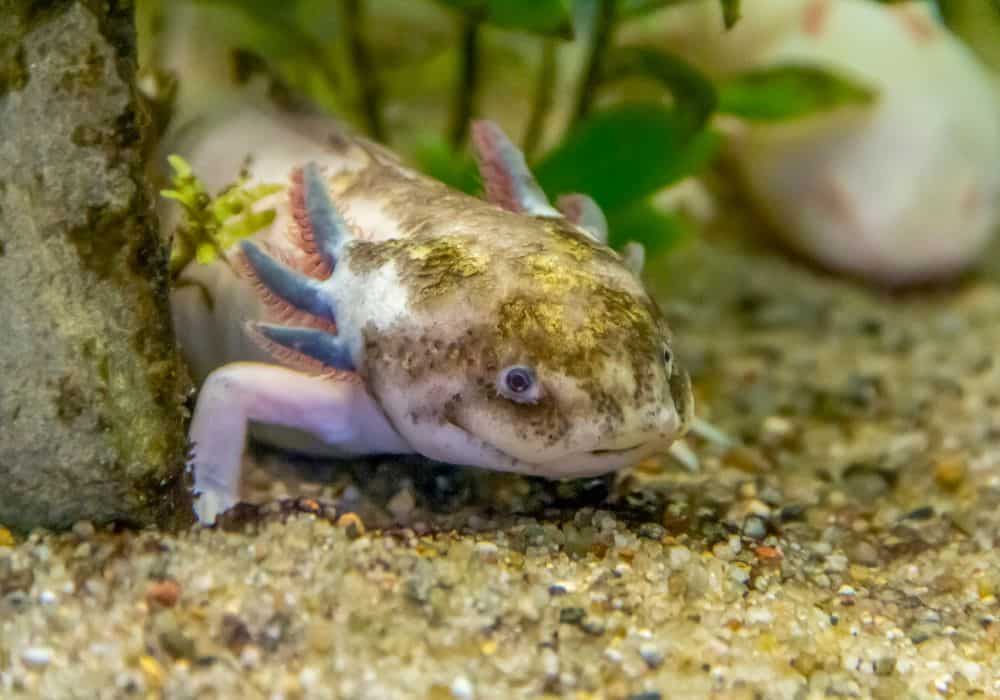 On the contrary, wild axolotls are freer when it comes to their diet. Despite their adorable features, they are often considered vacuum cleaners. With their wide mouth and strong teeth, they can easily consume their prey, which are small crustaceans, fishes, mollusks, and insect eggs.

However, their rudimentary teeth are only used to clamp down on their prey. These aren’t sharp teeth; hence they can’t tear or chew their food. Instead, they suck water along with the food into their mouth. So, normally, you can’t see them chomp on their food because they just swallow it as a whole.

These species generally do their hunting at night, especially when bigger creatures are asleep. During the daytime, they effortlessly blend with aquatic vegetation and even mud to dodge other predators. Their common predators are herons, storks, carps, tilapia, and other large fish species.

Wild axolotls were initially found in swampy waters of Mexico’s natural lakes. Within their habitat, they feast on a variety of species such as mosquitoes, crickets, insects, snails, worms, frog tadpoles, fishes, and small aquatic animals living in the lake.

Just like captive and wild axolotls, baby axolotls eat the same protein-rich food accessible in their habitat. These vary from small insects to worms and such. Nightcrawlers, or earthworms, are the most popular diet of these species. These are very nutritional, especially for the young ones.

Additionally, there are some water-based foods that may be incorporated into their diet. These include brine shrimp, tubifex, and daphnia, which are all very small creatures that are easy to consume. However, feeding young axolotls that are grown as pets may be a challenge, especially if you’re a first-timer.

To ensure they acquire enough nutrients, it’s highly recommended to use a smaller tank for them to roam around with no trouble. Bigger containers may be difficult for baby axolotls to find their food. Also, try to invest in some feeding essentials like tweezers and a turkey baster to help them swallow the piece easily.

How Much do Axolotls Eat? 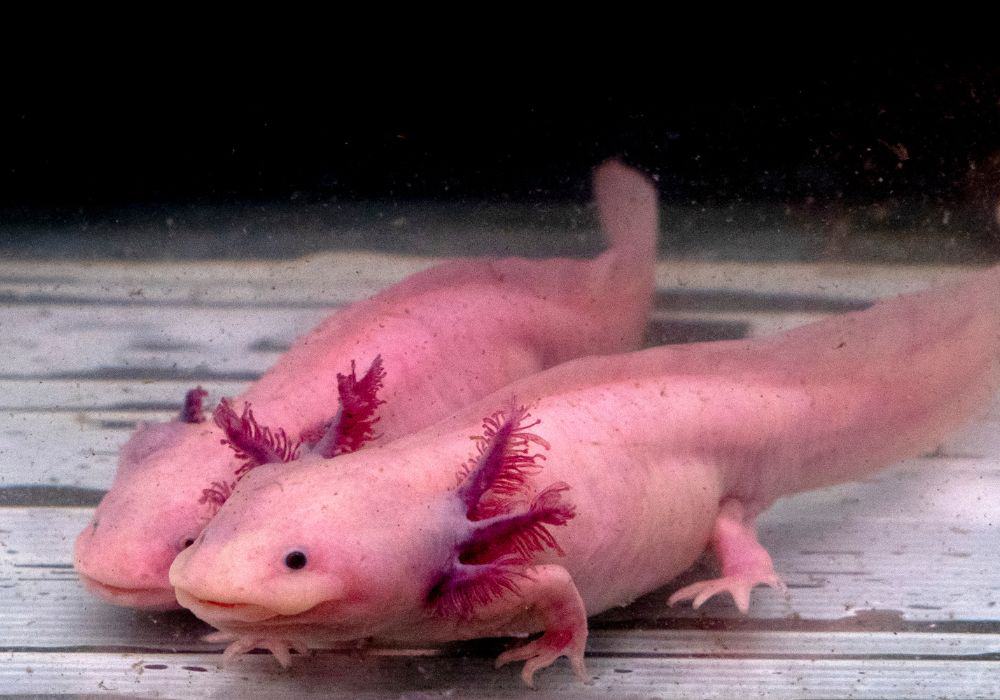 The consumption of axolotls largely depends on their stage of life development. Newly born axolotls require frequent feeding because of their accelerated metabolism. Meanwhile, younger ones are fed once or twice a day.

It’s also pivotal to keep an eye on their feeding routine so they won’t miss the nutrition that they need. You have to feed them a proper diet every day, so it’s recommended to have living organisms at hand.

Overfeeding, however, may also be crucial because this can pose negative effects on their delicate system. Too much food can lead to obstruction of particles in their stomach and even constipation. Younger ones also tend to be very messy when eating. If they have leftovers, you have to clean them up right away.

On the other hand, adult axolotls don’t require a lot of food. One or two worms are enough to satisfy their diet and keep them in great condition.

What Not to Feed Axolotls 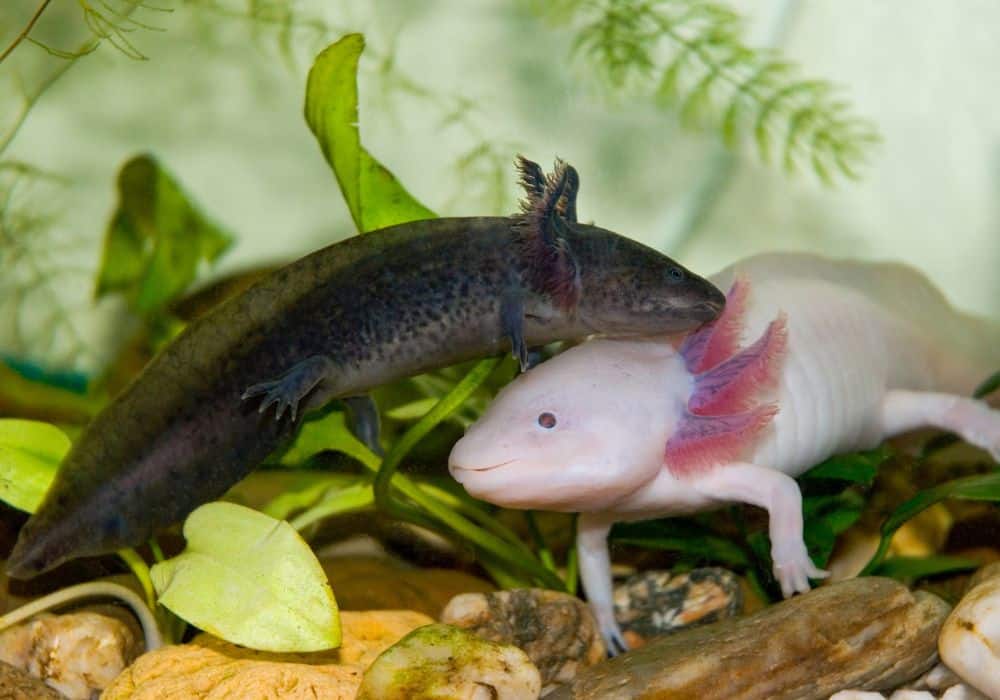 Often than not, axolotls take in anything that sinks into their aquarium. Therefore, you have to be careful with the food that you put into their container. While they generally feed on smaller and softer organisms, there are things that should be out of their reach.

Having an idea of the dos and don’ts helps your pet axolotl be healthy for a long time. Below are some of the foods that shouldn’t be fed to these adorable species.

First on the list are processed meats or anything with preservatives. It should be noted that axolotls feed on living organisms, hence feeding them with preserved food goes against their diet. Moreover, processed meats are loaded with harmful chemicals that may have a negative effect on their health.

2. Anything with a hard surface

Aside from food with preservatives, make sure you do not feed them with anything that has a hard exoskeleton. For many wild axolotls, they may seemingly eat smaller crustaceans.

However, if you have them as a pet, it’s best not to feed them with shellfish or crustaceans with harder textures. These are very difficult to digest since axolotls do not have sharp teeth to break down their food. If you do so, your pet may experience indigestion or other digestive problems.

Although mealworms are normally fed to exotic pets, these are a no-no for axolotls. Mealworms embody a fibrous substance called Chitin, which makes up the solid exoskeleton of most insects and other species. And as mentioned earlier, anything with a hard texture should not be consumed by axolotls.

In general, pellets can be fed to axolotls. However, you should be vigilant not to feed them hard ones that may cause illness to your pet. Also, try to select a pellet that is rich in protein. A pellet with at least 40% protein is highly recommended. 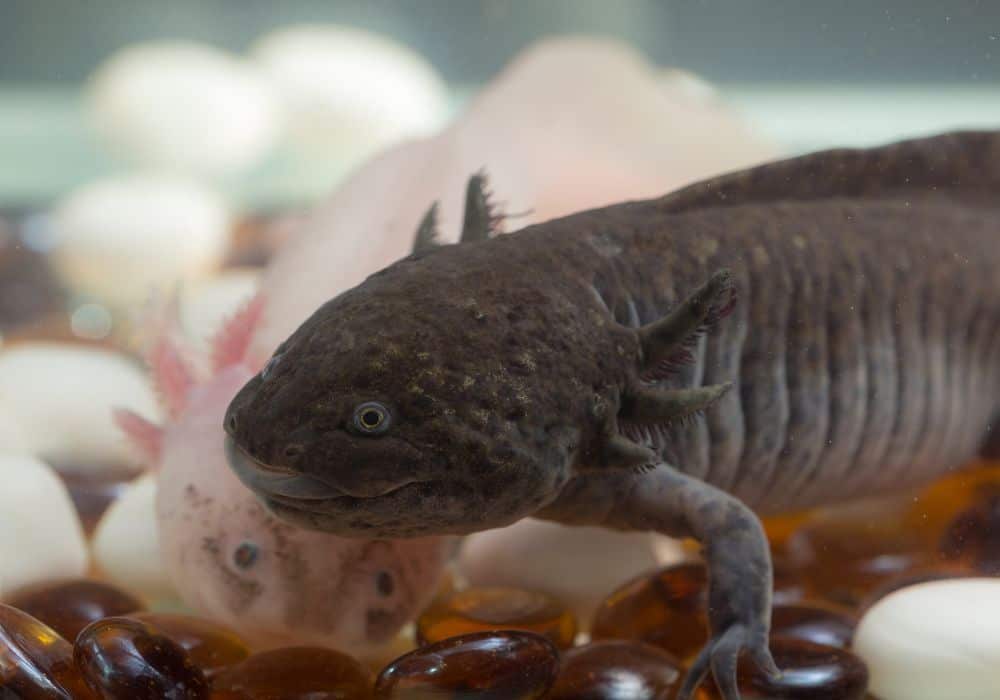 Feeding axolotls can be a fun and relaxing activity. But of course, being knowledgeable about their diet is crucial. So, here are some relevant tips when giving the right nutrition to your beloved pet:

1. Watch them closely when feeding to avoid mess.

One thing to consider is that most axolotls tend to not pay attention to the food if they are not moving or wiggling. Henceforth, it’s a must to monitor them when feeding, especially if you are giving them something that is not alive.

2. Feed them separately with other fish.

It’s important to separate axolotls from your other pet fishes. The reason why is because the food that is supposed to be for axolotl can be eaten by other fishes. Feeder fish, in particular, is highly suggested not to be in one container with axolotls. This type of fish may also transfer parasites to your pet.

3. Be mindful of the living organisms that you feed them.

Nightcrawlers are some of the common foods for axolotl. However, you have to ensure that these are organically sourced so no chemicals are added to them.

4. Change the type of food depending on their needs.

Axolotls may lose their appetite for many reasons. If this happens, and you have done all the tips above, maybe it’s time to make some changes in their diet. Switch up their food with something they haven’t tried and see if they consume it.

Truly, axolotls are remarkable animals that should be taken with the utmost care, most especially with their possible extinction. And when feeding them, be sure to consider the food that they can and cannot eat.

1. Is it ok to touch axolotls?

Just like most fish species and amphibians, axolotls have delicate bodies and permeable skin. Touching them may damage their skin and make them vulnerable to diseases. Therefore, they should not be touched, unless necessary.

2. How long can axolotls go without food?

Younger axolotls can only survive a few days without eating. Meanwhile, older axolotls can go for several weeks without food! But of course, this is not highly recommended because it’s important to feed them with nutrients that their body needs.