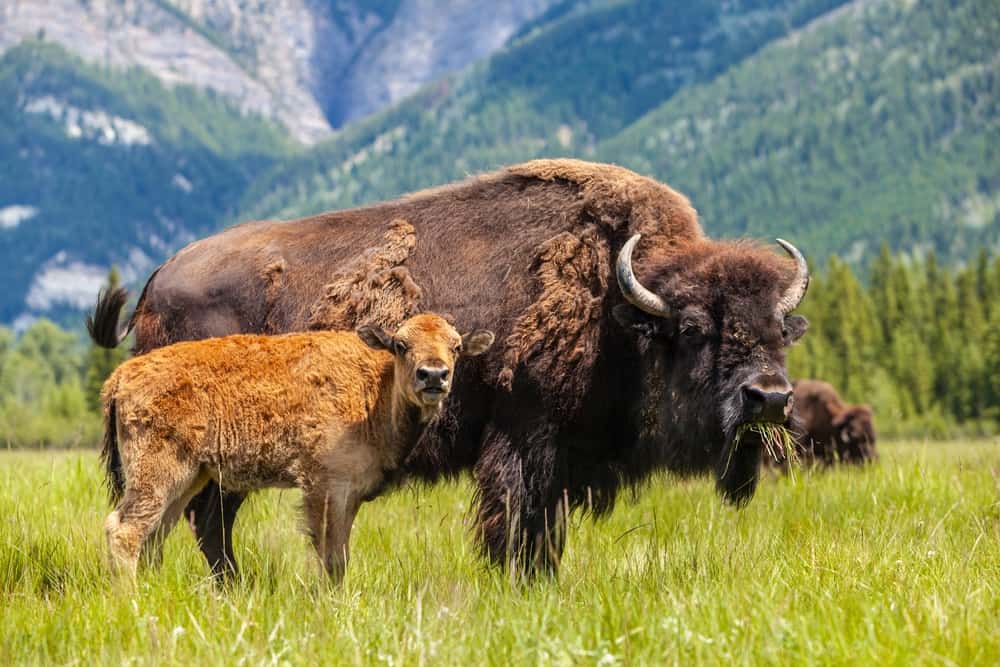 Bison are the largest wild mammal in both North America and Europe. Early in the twentieth century, habitat destruction and hunting brought this majestic animal, which was once common over the continent, dangerously near extinction. In 2016, it joined the bald eagle as an official symbol of the United States, and like the eagle, it has a long history of successful conservation efforts.

North America was always connected to the Bison, where the open landscapes were home to millions of animals before almost extinction. But there are also bison in Europe, and the European bison, sometimes known as the wisent, covered most of the continent. In Africa and Asia, their closest relatives are the buffalo and the water buffalo.

According to www. rewilding europe.com, the bison were driven into the most isolated regions of the earth after the Ice Age by man’s intense hunting. During World War I and the Russian Revolution, soldiers and poachers slaughtered the remaining wild animals. In 1919, the last wild bison in Europe perished. The 54 creatures that were housed in various zoos and descended from just 12 founder animals allowed the species to persist. Thanks to the conservationists, the first bison were returned to the wild in Poland in 1954.

Bison have existed consistently in the United States in Yellowstone National Park. The Plains bison (Bison bison bison) is one of two American bison subspecies, the other being the wood bison. The bison in Yellowstone are unique because they are the direct descendants of the first bison in this region. The number of bison in Yellowstone was estimated to be 4,900 as of 2015.

Southern Asia is the origin place of the American Bison. During the Pliocene Epoch 400,000 years ago, bison traveled to America by way of the land bridge that connected Asia and North America. Compared to the familiar bison of today, these ancient creatures were substantially bigger. The prehistoric bison had horns that measured 9 feet from tip to tip, according to fossil records.

Today, thanks to various repopulation programs, there are approximately 8500 European bison, approximately 6200 of which live free in the wild, and approximately 31,000 wild bison in North America. 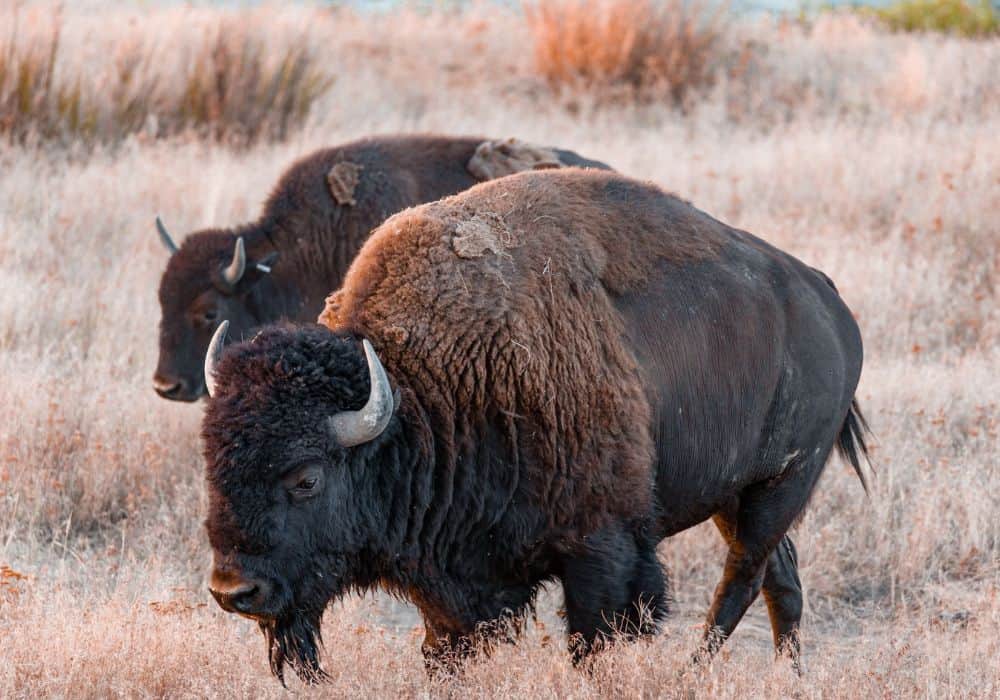 Bison have a maximum height of six feet (1.8 meters). A female, which is called a cow, can weigh roughly 900 pounds (400 kilograms) while a male can weigh up to a ton (900 kg). Compared to the American bison, European bison are slightly taller but squatter.

The hump on their shoulders is one of the most obvious characteristics to recognize them. Their dark brown fur, which can become very long, especially around the face and head like a beard and mane, is another distinguishing feature. A bison’s head is enormous and has an imposing skull.

Bison are strong animals. When fighting, they collide their heads or horns. The small, curving, black horns on male and female bison can reach lengths of two feet (0.6 meters).

American bison inhabit grassy valleys, prairies, and plains. They also roam freely in hilly or mountainous areas with gentle slopes. On the other hand, European bison prefer forested areas and dense shrubs and bushes. Grasslands and plains also make a good home for the European bison.

Bison live in small groups that are called bands. One or more females and several generations of their offspring are the basic units. Bison’s diet consists of grass and herbs, but they will eat twigs and leaves as well.

According to Britannica, males live on the outskirts of the band and can even form their separate small groups. Bulls compete in head-butting contests to determine social power during the mating season, which peaks in August.

They travel south in the winter and then return north when the weather warms up, undertaking short seasonal migrations.

Despite their size, these great animals are agile and quick, reaching speeds of 65 km (40 miles) per hour. But bison are also unpredictable. They can be reached closely without becoming alarmed at times, but usually, they will run at the slightest opportunity. They are not aggressive animals and will usually flee when they see humans. Their behavior can be influenced by their habitat and feeding situation. They don’t attack unless provoked repeatedly or from close, and habitats that aren’t optimal will raise the chances of their encounters with humans.

During the majority of the year, females and male bison stay separated. The females and the calves usually stay in the middle of the herd, while males are on the outside or in separate groups.  In the summer, when breeding season starts, males join the female herd and look for a mate. Bison communicate through their senses of hearing and smell, showing they are ready for a mate through pheromones. They will also make several different sounds that will attract attention. The male bison selects the female from the herd and fights to defend her against other males.

Bison have an average gestation period of nine and a half months. Bison have calved from mid-April to June under normal conditions. Calves are born in the middle of spring to increase their chances of survival. Most of them will have only one baby. These calves are approximately 50 pounds (23 kilograms) in weight, born with reddish fur. The calf stands within an hour of birth and starts waking right after. Around two months of age, the red begins to turn dark brown.

Even though the calves know how to be self-sufficient, the cows will care for their young in

What do bison eat? 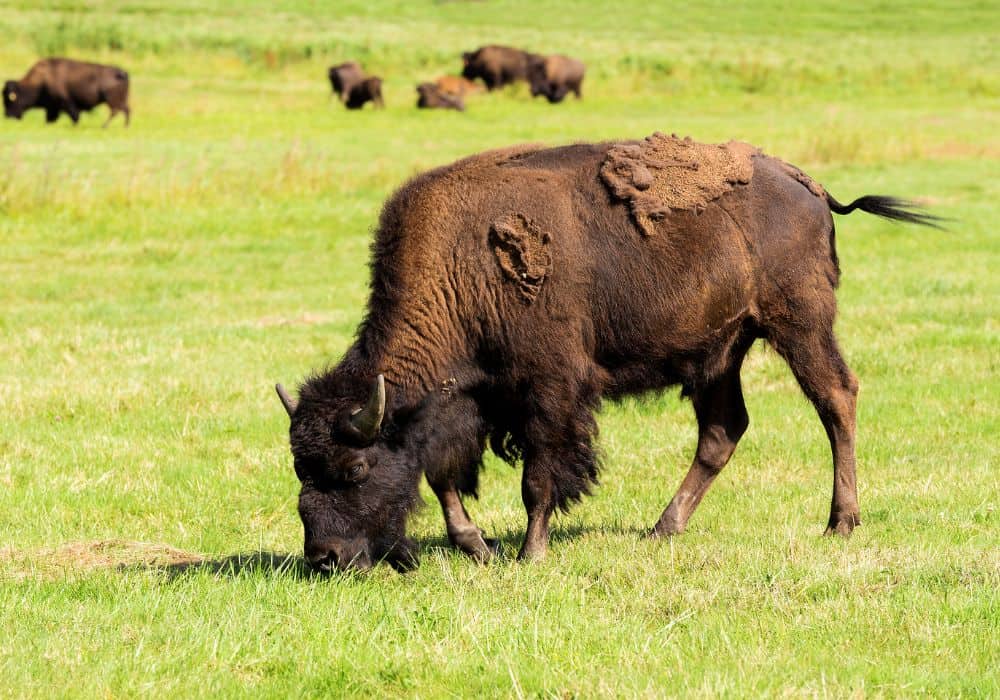 Bison are herbivorous grazers with ruminant digestion and more stomachs. Most species have a similar diet, with slight differences.

The American bison are vegetarian nomads. Their diet consists of a variety of things:

Bison must eat 1.6 percent of their body weight per day to stay healthy. This equates to about 24 pounds of food per day.

The eating plan of European bison varies greatly depending on the period:

Bison follow vegetation and go where the most nutritious alternatives grow at different times of the season. Bison and the way they eat play an important part in the ecosystem. Ecologically, they shape the landscape in which they live. Bison impact the greenery by debarking trees, splitting dense undergrowth, and generating exposed soil spots in which new plants can grow easily.

What are bison’s predators? 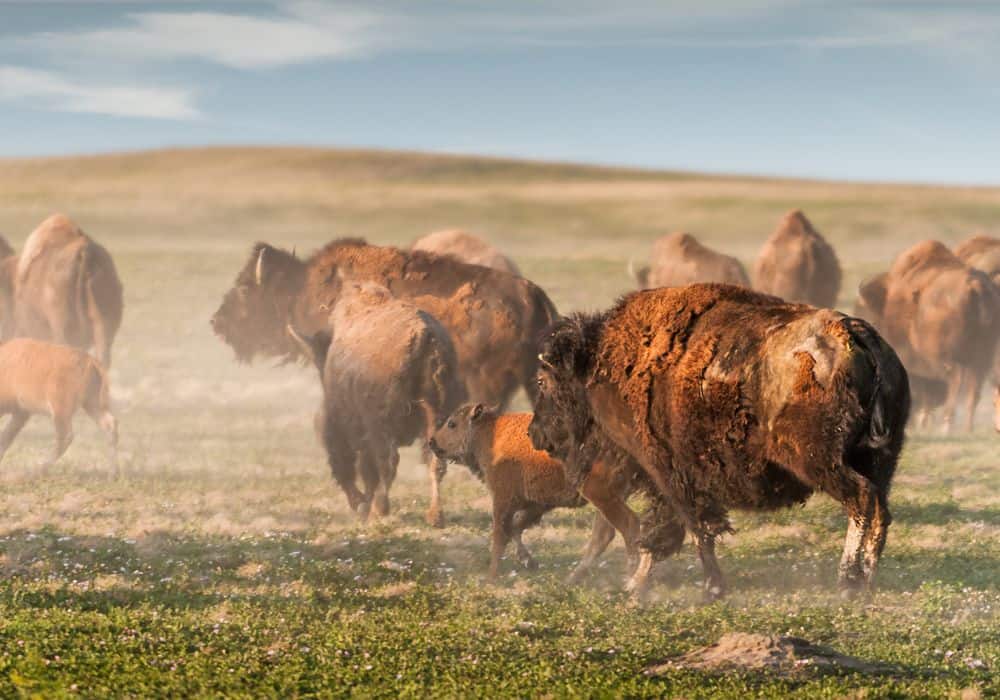 These herbivores are still prey animals, despite their size and behavior. Coyotes and mountain lions can prey on bison calves. Wolf packs are the primary predators of adult bison. They are also the main source of food for the wolves in Wood Buffalo National Park in northern Canada. Grizzly bears will now and then hunt weaker individuals of the cattle, like elders, calves, and the sick. And even though their predators are few, for hundreds of years their greatest and almost fatal threat were humans. Bison were nearly hunted to extinction in the nineteenth century. By the late 1880s, there were only about 100 left in the wild. They were hunted for their skins and tongues, leaving the rest of the animals to rot on the ground.

Bison are extraordinary herbivores that were close to destruction, but which, fortunately, came back today in such large numbers with the help of conservation programs.

They are gigantic giants that live in groups and feed on grass, young trees, and bark. They have an extremely important function in the ecosystem, and their diet leaves behind a changed landscape, with beneficial openings for a large number of species.