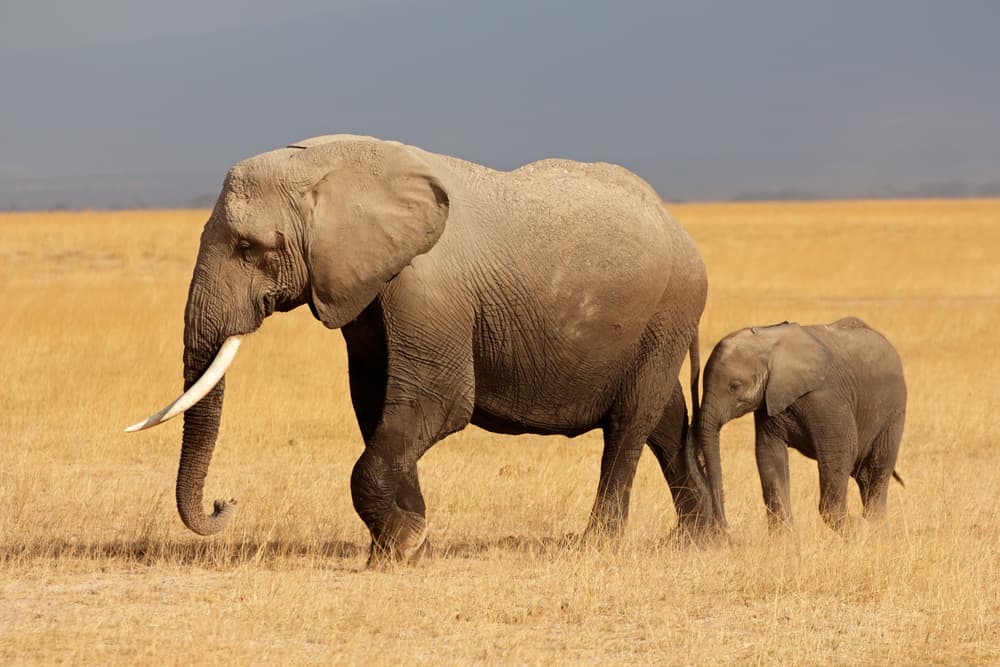 Few animals are as iconic as the African elephant and none are larger, at least not on the land. Given the astounding size of this giant mammal, however, exactly what do African elephants eat? Just leaves and grass? How can such a huge mass of muscles be supported on a diet of the occasional leaf branch and a tuft of grass? To find out, let’s explore exactly what an African elephant is and what you need to know about it.

Lots can be said about African elephants, the distinction between the different sub-species, their appearance and feeding habits, as well as their conservation status. We can’t go into too much detail in a single short article but we’ll try to cover all the most important facts below.

Everyone knows roughly what an elephant looks like but things can get a bit confusing when you’re looking at the different species of elephants. Still, before we go into the slight differences between the several elephant species, let’s go over the basics:

Habitat and distribution of the different species of African elephants 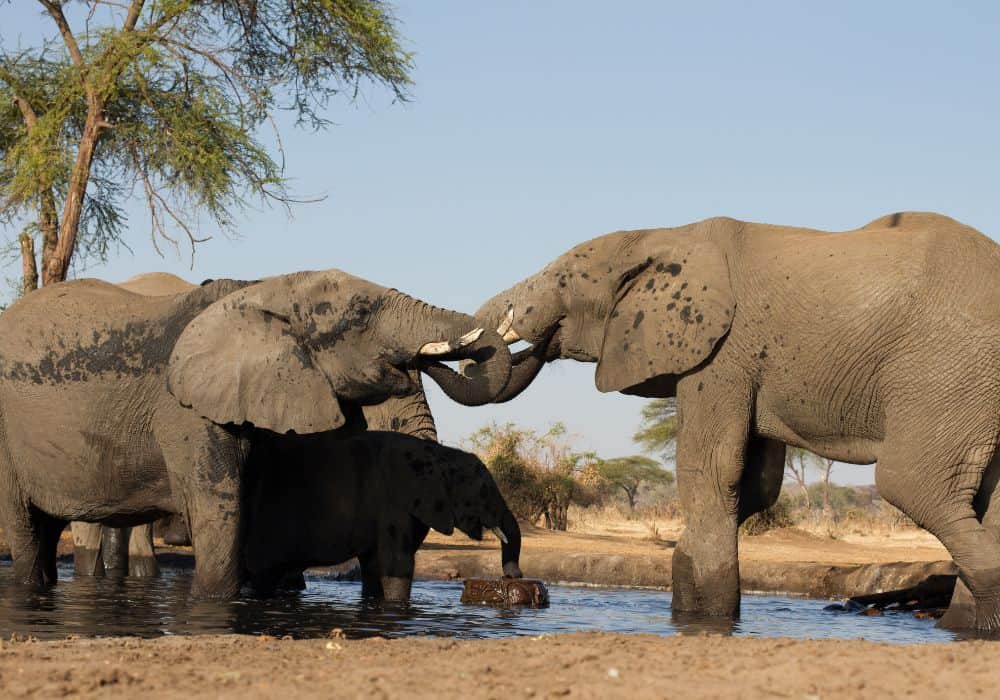 They leave in the dense African forests of Gabon, the Republic of Congo, as well as sparse populations in Côte d’Ivoire, Liberia, Central African Republic, Cameroon, Ghana, and Equatorial Guinea.

Overall, African forest elephants live in smaller herds and have slower reproductive cycles which means that they have a much harder time dealing with poaching. So, finding a forest elephant herd in the wild is getting more difficult with each passing year and we may soon be only able to see them in a zoo.

Savanna elephants live in the open plains of African savannahs in sub-Saharan Africa. They can be seen in countries such as Kenya, Namibia, Botswana, Zimbabwe, Tanzania, Zambia, and South Africa. Like forest elephants, savanna elephants also live in herds of mostly female elephants led by a matriarch, however, said herds are typically much larger.

It’s also not uncommon for savanna elephant herds to often group into larger “loose families” of up to 70 animals that know each other and move together. That, combined with their faster reproductive cycle, makes savannah elephants more resistant to population loss due to hunting or environmental issues.

Both types of elephants are seen as a “facultative partially migratory species” because they move around Africa every year. They do this search for the optimal climate conditions, watering holes, and feeding grounds as the dry season and rainy season of Africa change. 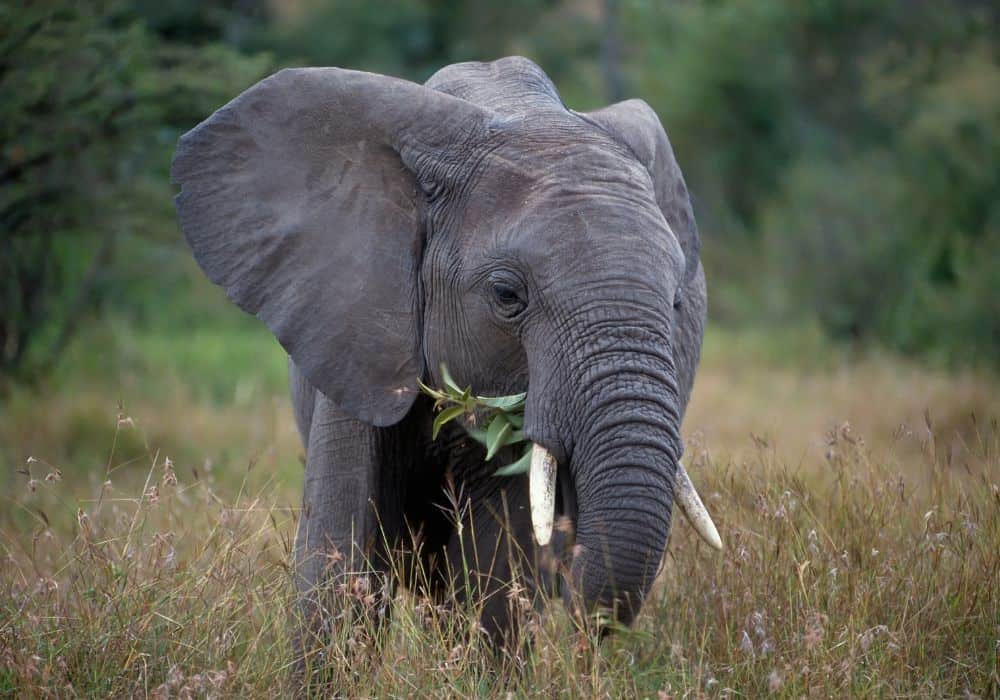 As herbivores, both species of African elephants feed on vegetation. This includes all types of leaves, twigs, tree bark, roots, as well as bushes, grass, and fruits. From these sources, elephants get all the nutrients, minerals, and calcium their giant bodies require to maintain their powerful bodies and muscles.

A smaller elephant calf can’t reach most trees, of course, but is usually helped by its mother who lowers tree branches or breaks them off entirely. That, plus grazing on bushes and grass is enough for an elephant calf to comfortably grow.

How do African elephants eat?

Watching an elephant eat is a fascinating sight as they will use both their trunks and their tusks to aid in the task. Elephants aren’t the most agile creatures so bending to graze on grass can be tricky. Instead, they will pull grass with their trunks or pull branches down to the level of their mouth. They also use their tusks to get roots out or to break tree bark off of trees.

How much do African elephants eat per day?

This herbivore diet raises the obvious question of how can such grazers reach such gargantuan sizes and impressive musculatures on just grass and leaves? How much does an elephant need to eat every day to survive? The answer, obviously, is – quite a lot.

The average adult African elephant consumes over 130 kg or about 300 lb of food a day. The larger males – especially savanna elephant males – can eat even more than that while females eat less. In both cases, however, those quantities and diet mean that elephants spend most of their time walking around and grazing on everything they can find while their digestion is working non-stop.

Interestingly enough, this diet also means that elephants sleep just about 2 hours a night so they can spend the other 22 hours of the day walking around and eating. In zoos, these animals tend to sleep more than that, usually up to 4 or 6 hours a day but that’s largely because they don’t have much else to do as well as thanks to the lack of predators around them.

Granted, even in the wild adult elephants don’t have many (or any) natural predators, however, sleeping for too long can be dangerous for their small calves as they can get ambushed by a lion pride.

Related to their impressive feeding habits is the amount of water elephants need to drink every day – about 200 liters or 50 gallons of water a day. This is another big reason for their constant migrations as finding enough water can be difficult during the savannah’s dry season.

The ivory trade and poaching for sport are the two main reasons why African elephants are endangered today along with the constant changing and restrictions of their habitats. Additionally, while a lot of African governments and NGO groups are working actively for the conservation of both forest and savanna elephants, the migratory nature of these animals as well as the vast areas they occupy, makes all conservation efforts very difficult and not entirely effective.

African elephants have a strict herbivore diet of rather impressive quantities needed to support their immense weight. This diet as well as their water requirements forces these large animals into a near-constant migration pattern that makes conservation efforts difficult and allows poachers lots of opportunities for hunting elephants for their precious ivory.