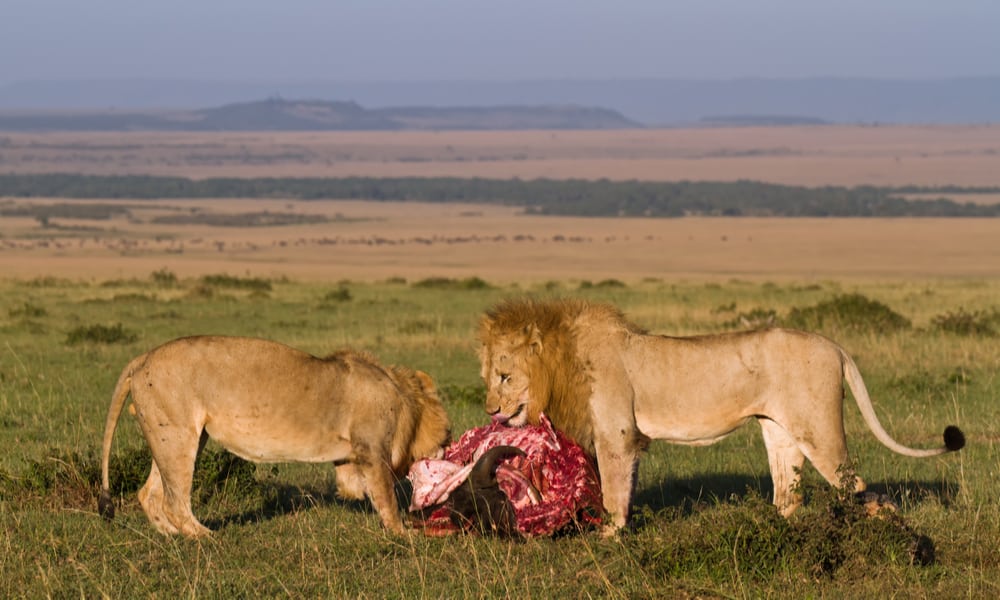 What do lions eat? Meat. The end of the story. Are you sure it is that simple? Yes, lions prefer consuming meat and are not too picky, but they still won’t grab any animal passing by. Let’s take a look.

What Do Lions Eat in the Wild 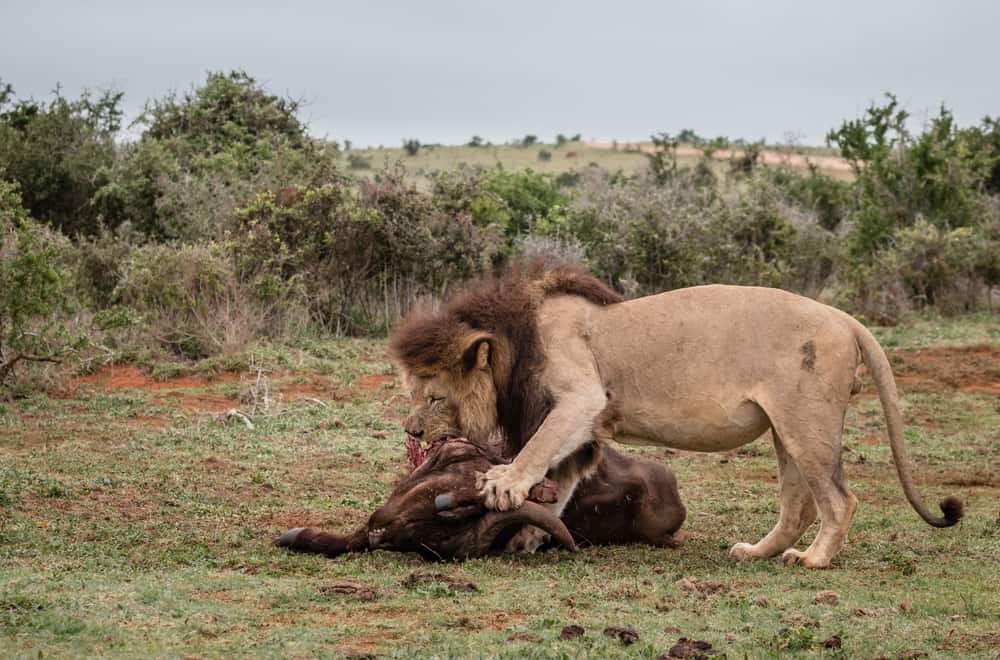 Lions are carnivores and fierce predators known for their hunting effectiveness. They typically hunt in the prides (groups) that consist of up to three males, a dozen females, and their cubs.

Since females are significantly faster, they are primary hunters in the group, particularly during hunting on open savannas. Lonely male lions choose denser habitats for hunt since these places are better for surprising prey without much chasing.

A pride usually comes close to the prey herd, spreads around, and attack it from several directions. Since their stamina is not at high levels, they always hunt in short bursts, attack the victim from the back, and bite it to the neck.

Interestingly, lions’ hunt is much more successful when they chase prey in a group. In such a case, their success rate is 30%, while lonely males catch prey in only 17% to 19% of hunts. They often steal carrions from other predators, particularly hyenas, when they get the chance.

One lion kills approximately 15 large mammals a year. Since their routine includes a lot of running and a few days without food, these animals eat up to 70 pounds (31.75 kg) of meat for one meal.

In other words, when a pride catches an African buffalo that weighs approximately 2,000 pounds (907 kg), all members will get a share without any leftovers for vultures and hyenas.

When there is enough food, adult males will be satisfied with 15 pounds (7 kg) of meat daily, while females need 11 pounds (5 kg), or about 15% of their body weight. The strongest male always eats first, and then come lionesses with cubs. Lions will always pick out prey, that is:

Even though lions enjoy eating warthogs, zebras, Grant’s gazelles, and wildebeests the most, a list of their top prey also includes:

If the lion is hungry and some small prey comes up, it will grab it without hesitation. So, its victims can also be:

Lions can also nibble some grass from time to time, like domesticated cats. It will help this animal overcome problems with an upset stomach.

One study about Asiatic lions’ eating habits shows that they primarily choose wild animals in 47% of cases while livestock was prey on 53% of occasions. The list includes:

Since Asiatic lions live in a restricted area in Gir National Forest, their livestock predation is considerably higher than in Africa lions.

Even though African lions can hunt giraffes, they will choose only smaller ones. In most cases, they will stay away from adult elephants, hippos, and rhinos.

Lions are definitely at the top of the food chain, and they can even kill rival predators like cheetahs, leopards, and hyenas. However, they typically don’t enjoy their meat since it can’t provide enough energy for their bodies. Therefore, they will leave such carcasses to scavengers.

Lions won’t typically kill each other except in a direct conflict while taking control over a new territory. In rare cases, male lions can attack and kill a lioness after refusing to mate. It is also possible for males to eat their cubs when they want females to mate earlier.

The rare animal that dares to attack a lion is a hyena. It is not common, but a hyena clan can try to overwhelm a lone old male lion.

Lion’s menu at the Zoo contains:

Since lions in captivity eat daily, males will need about 8 pounds (3.6 kg) of meat, while females require approximately 6 pounds (2.7 kg).

Lions (Panthera leo) are powerfully built kings of beasts and the second cat in size after tigers. They live in Africa grassland, savanna, open woodland, and dense scrub and hunt at night. About 650 lions live in Wildlife Sanctuary and Gir National Park in India under strict protection.

As you can see, lions roam primarily in restricted areas of Asia and eastern and southern Africa. Believe it or not, lions once lived in:

Nowadays, only 20,000 African lions live in the wild, and their population is in decline. Since their number has reduced by 40% during the last 30 years, this species is officially considered vulnerable to extinction.

Newborn cubs (lionets, whelps) are small with closed eyes in the first two to three weeks. That is a reason why these cute creatures are highly vulnerable in that period. Therefore, lionesses keep their babies hidden and protected from snakes, large bird predators, and other lions.

Since females sharing the same pride give birth at about the same time, they will raise their litters together. Male lions never participate in parenting, but most of them will protect the pride’s cubs.

Cubs depend on their mother’s milk for about six months. They consume only milk for three months and then start eating some meat. It is also time for them to get their first hunting lessons.

Young lions need approximately two years to become proficient hunters and another two to master this activity. Lionesses will take advantage of abundant prey to select weak and old animals to involve their offspring in a hunt. 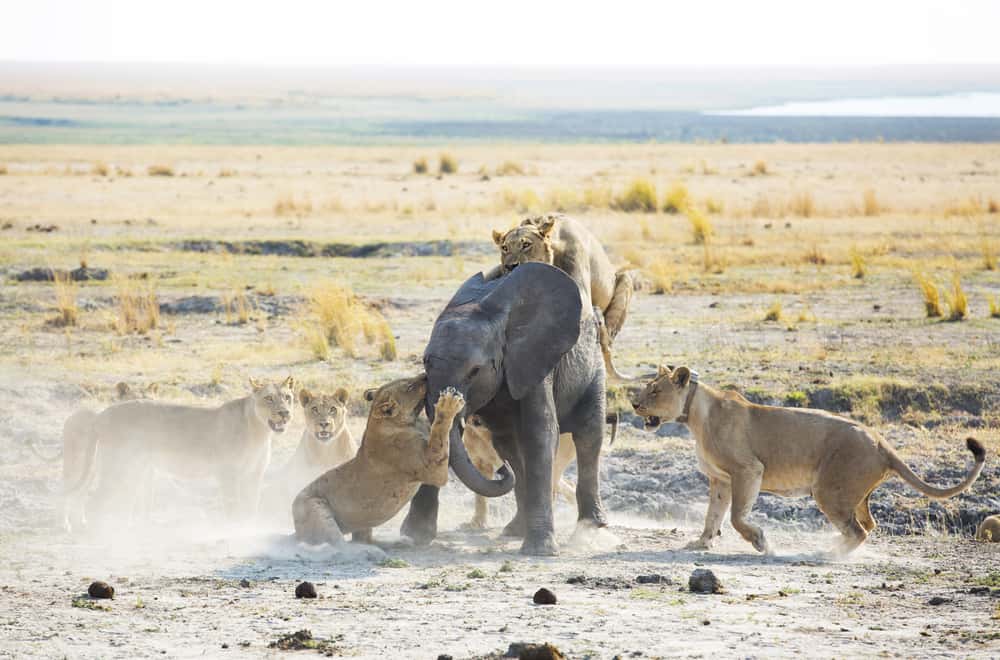 Even though an average pride includes numerous lions, only one female is responsible for almost half of the kills. Additionally, these animals enjoy stealing food from scavengers but often leave excess food to them when possible.

They rather choose to do that instead of allowing hyenas and vultures to disturb their sleep after a hearty meal.

Lions are greedy and often attack another prey they spot, although they already have enough meat. They will hunt although they are full when a favorable opportunity arises.

Since their maximum speed is 37 mph (60 km/h), they need to be clever hunters. They stalk their prey and get as close as possible. Only then can the chase begin.

The typical tactics include ankle-taping prey. They clip an animal’s ankle while running to make it easy to catch it. Sometimes large males jump on the prey’s back and kill it by grabbing its neck. It is also not unusual for these predators to climb trees and jump on the elephant’s back while walking underneath.

Sometimes, a group of lions will ambush prey, mainly when stalking is too difficult. Each of them will take its own position at the center and a left or right side. A few lions will quickly run toward prey while others wait for it in the bush.

Even though multiple lions are involved in the hunt, the pride leader male will eat first, then females with cubs. Weaker lions need to wait their turn but often stay hungry if the prey is not big enough. Luckily, an average lion can survive up to two weeks without food.

Lions prefer living near rivers and streams, although they don’t need too much water. The reason is prey. They know that all these animals will come to drink sooner or later.

Keep in mind that some lions can be highly dangerous for humans. Even though it is not typical behavior, they can eat people, like well-known Tsavo man-eating lions.

Male lions always ensure their territory of up to 100 sq miles (259 km2) by marking it. When the hunt is over and the lions finish with their meal, it is time for rest. They will sleep and relax from morning to late afternoon when it is too hot out there.

After taking a rest for approximately 20 hours a day, they will enjoy socializing from late afternoon to evening.

The pride members will enjoy licking each other’s faces and rubbing their heads on one another. Sometimes, you can hear them roar in the chorus. It is only their way of polite social communication.

White lions live in an endemic area in South Africa. The Timbavati Game Reserve is a part of the Greater Kruger National Park, where only ten of these beauties live in the wild. There are only 300 white lions worldwide, including those living in the Zoos.

Lions’ menu will depend on the region and season, but they are strict carnivores, and nothing can change that fact. These ferocious predators enjoy hunting prey but avoid attacking other predators, adult elephants, hippos, and rhinos. Plus, animal King won’t catch small rodents and birds unless it starves.