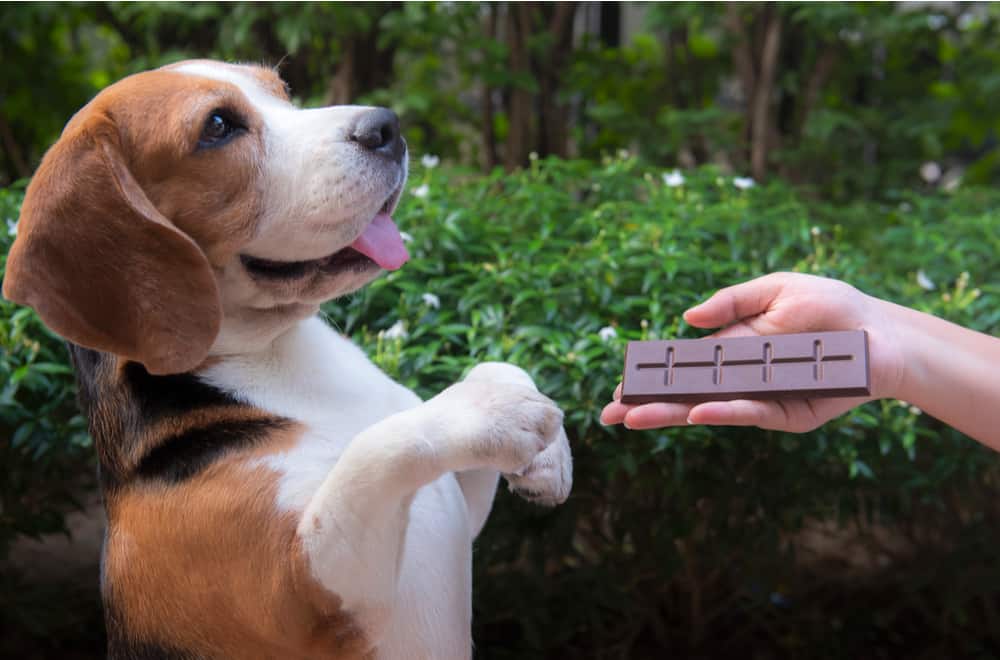 As any dog owner knows, our furry friends are not exactly the pickiest of eaters, and they take great pleasure in munching on just about anything they can find. Unfortunately, however, lots of the stuff we like to eat can be dangerous for dogs – and chocolate is high on that list.

Practically everyone who keeps a pet dog knows not to feed him chocolate, but not everyone knows why, how dangerous it can be or what to do if their dog devours some. To help, here we talk about these issues as we answer the question, why can’t dogs eat chocolate?

If you want a preview of some of the things we’re going to be talking about, you can also check out this video before reading on.

Why does chocolate make dogs sick – the science

Let’s start by doing the science bit and talk about what it is in chocolate that is bad for dogs.

Chocolate and cocoa are both made from the seeds of the cacao tree, Theobroma cacao. These seeds, or cocoa beans as they are known, are fermented, roasted, shelled and ground before being used to make chocolate and cocoa products.

The component of cocoa beans that is toxic for dogs is something known as theobromine, a methylxanthine closely related to caffeine.

When humans consume theobromine or caffeine, they are quickly metabolized, but dogs are unable to do this, so when a dog eats chocolate, the amounts in its system can quickly rise to toxic levels.

When a dog ingests theobromine through eating chocolate, the toxic build-up reaches its peak after around 10 hours (this is known as peak serum), and it takes the dog 17.5 hours to eliminate half of the ingested dose.

Since dogs are unable to process theobromine effectively, this kind of build-up can have dangerous consequences. Caffeine, which is often also present in chocolate, also behaves in a similar way, although the effect is not quite as strong or dangerous as with theobromine.

Incidentally, cats are even more susceptible to chocolate poisoning – but it is far less common in cats since they are fussy eaters and are much less likely to eat chocolate, even when they find it.

What factors can affect the level of toxicity? 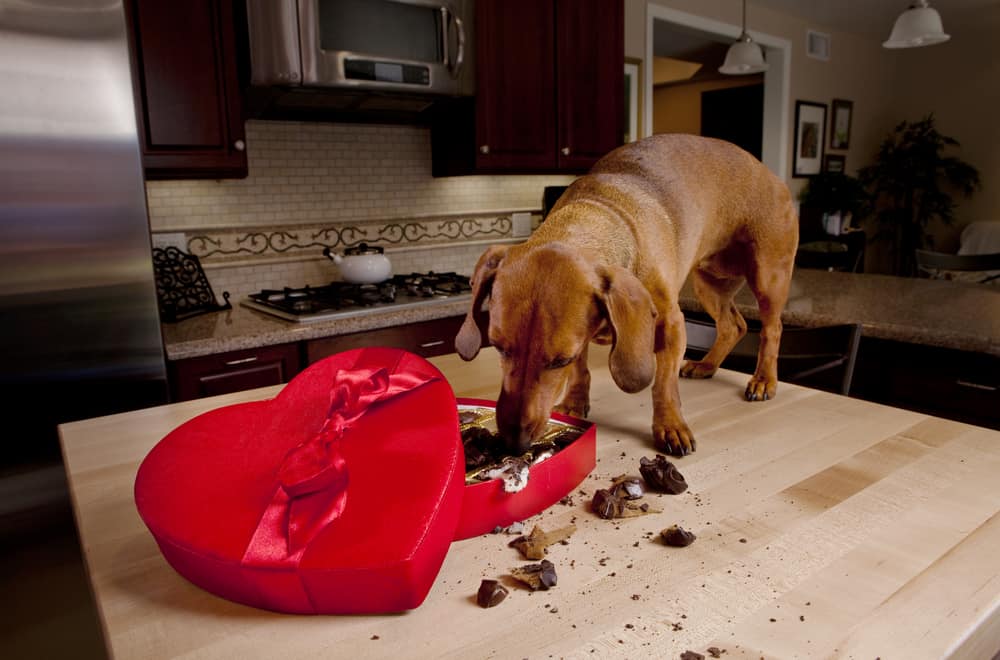 Just because a dog has eaten a small amount of chocolate, it doesn’t necessarily mean the dog is in trouble. There are three factors that can affect the level of toxicity the chocolate can cause: the amount eaten (the dose), the type of chocolate and the size of the dog.

Clearly, the amount of chocolate eaten is a significant factor in whether the dog will suffer a bad reaction from eating chocolate and how bad that reaction will be. The more chocolate the dog eats, the more dangerous the situation.

The type of chocolate the dog eats is a significant factor since not all types of chocolate contain the same levels of theobromine. As a rule, the darker the chocolate, the more dangerous it is for dogs, with baking chocolate and cocoa powder being the most dangerous.

Here are the types of chocolate in the order of toxicity for dogs, with the most toxic first:

Bear in mind too that many food items like cakes or cookies may contain varying amounts of chocolate, so you need to be careful about them eating anything that contains chocolate rather than just chocolate in its plain form.

As well as the amount of chocolate eaten and the type of chocolate consumed, the third factor is how big the dog is.

Dogs come in a wide range of sizes, and the amount of chocolate that may make a chihuahua very sick, for example, will probably have no effect on a large rottweiler. This is why the toxicity of chocolate in dogs is always stated relative to the weight of the animal.

What is a dangerous dose?

So now we’ve understood the factors that can affect how toxic chocolate is in dogs, now we can think about how much would be dangerous for dogs in different situations.

So what does this mean in practice?

If mild symptoms appear after consuming 20mg per kg of body weight, a small dog of 5kg (11lbs) would need to consume around 100mg before it started feeling the effects.

If a dog eats even a very small amount of baking chocolate or cocoa powder, the situation should always be treated as serious.

On the other hand, a dog would have to consume an improbably large amount of white chocolate (probably more than its own body weight) to have any effect since white chocolate contains almost no theobromine.

If your dog has consumed chocolate and you are worried about her health, you can use this handy calculator to work out whether the amount consumed is dangerous and what action, if any, you should take.

There are also a couple of other factors that can affect how much theobromine a dog can take.

Puppies or older dogs are more susceptible to theobromine toxicity. Dogs with underlying medical conditions are also more at risk.

Some dogs are even less able to process theobromine than others due to genetics.

Specifically, those with the 1117C>T variant in their CYP1A2 gene are more susceptible.

What are the symptoms of chocolate poisoning? 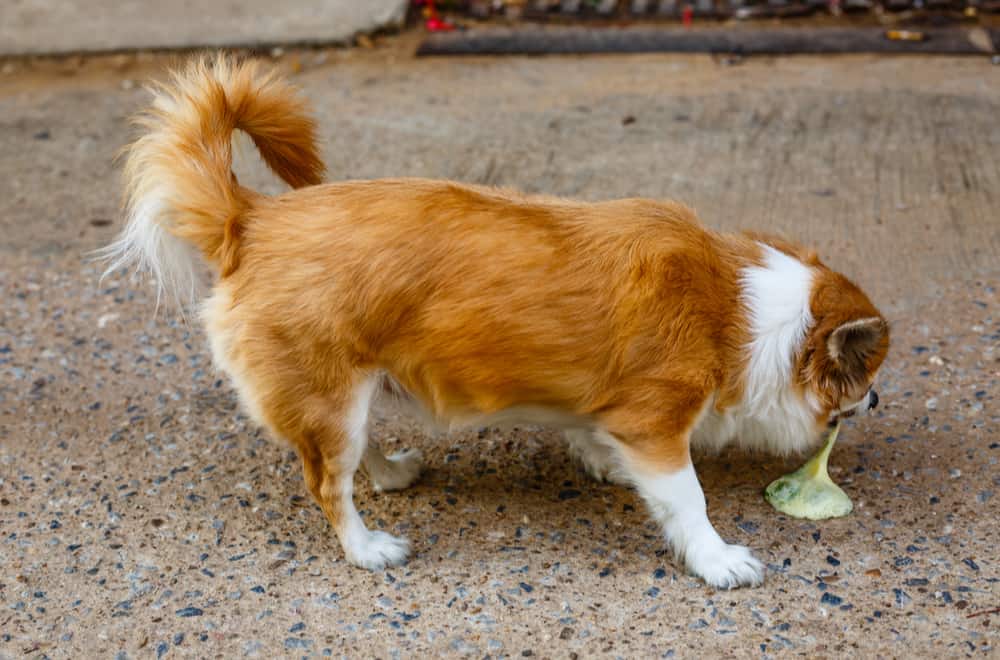 If you suspect your dog has managed to eat some chocolate, you should keep an eye out for the tell-tale signs of theobromine poisoning. The symptoms usually come on around two to four hours after ingesting the chocolate and are often preceded by a period of hyperactivity.

Once the symptoms begin, they may last up to 72 hours unless the dog receives treatment.

Here are some of the main symptoms to look out for:

In low doses, dogs will begin to feel nauseous and may vomit. This may be accompanied by hyperactivity and diarrhea.

Due to the hyperthermia, your dog may display excessive panting as it tries to cool itself, and it may also seek out cooler places to hide – although it is unlikely to stay there due to the agitation and hyperactivity.

In even higher doses, there is an increased risk of seizures, collapse, muscle rigidity, ataxia (uncoordinated movement), coma or even death.

What should you do if your dog eats chocolate? 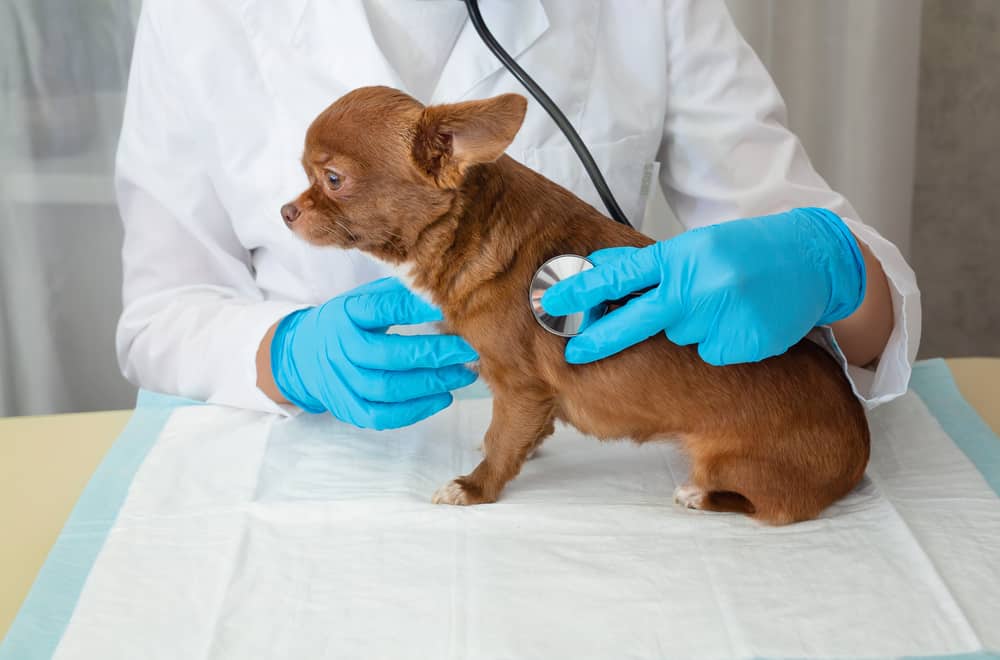 If you think your dog hasn’t eaten a dangerous amount, you should monitor him for symptoms, and if any appear, you should take the dog to see a vet as soon as possible.

If the dog has consumed a large amount of chocolate – or if you are unsure how much chocolate he has eaten – you should take your pet to see a vet immediately. Early treatment is essential and will help the dog make a faster recovery.

In extreme cases, getting to a vet as quickly as possible may even save the dog’s life.

If a dog is pregnant, you should also get it to a vet immediately as theobromine can cross the placenta and affect the unborn pups.

What are the treatments for chocolate poisoning? 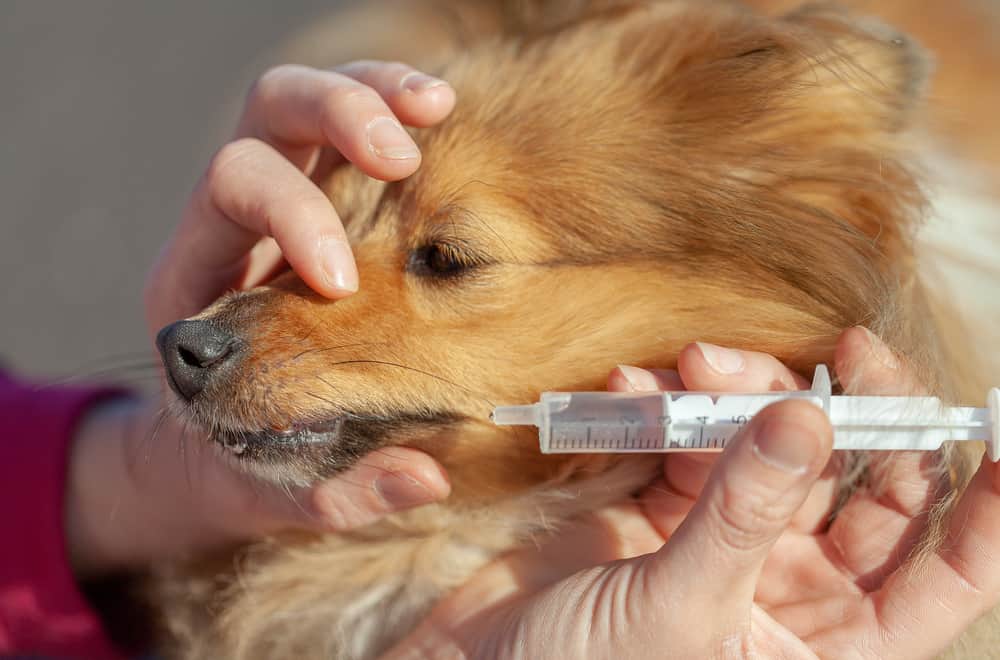 To treat a dog that has ingested chocolate, the first step is to empty the dog’s stomach to prevent the chocolate from being digested. This is one of the reasons why early treatment is vital.

If possible, the vet may try to induce vomiting, and apomorphine – administered through the eye – may be used. Aggressive IV fluids may also be used to help the chocolate pass through the dog’s system and out the other end.

Another likely treatment involves administering activated charcoal contained in wet dog food. Activated charcoal binds with drugs and other chemicals, weakening the effects. It also turns the dog’s poop black, but this is nothing to worry about!

Again, activated charcoal is most effective if administered early, so getting help for the dog as quickly as possible is of the utmost importance.

Aside from this, other medication is administered to control the symptoms of theobromine poisoning.

These may include sedatives to help calm the dog, heart medication to slow the heart rate and reduce blood pressure, anticonvulsants to prevent seizures and antacids to calm the stomach.

Tips for avoiding it

With all the trouble it can cause and the distress it can bring for both pet and owner, it’s far better to ensure dogs never have access to chocolate. It might be dangerous and even deadly for them, but they don’t know that, and to dogs, chocolate just smells like another tasty treat.

This means keeping chocolate away from your canine friends is imperative, and here are a few tips and ideas that might help.

Sometimes people wonder how dogs manage to find hidden chocolate, but you have to remember that their sense of smell is far more powerful than ours, so simply placing chocolate out of sight won’t do it.

Dogs can smell hidden chocolate, and if they can get to it, they will. So make sure that even if the dog can smell where the chocolate is, it’s well out of reach.

Make sure you keep an eye on young children around your dogs. Kids love playing with dogs, and they love to feed them – and if they’re too young to understand, they may give dogs chocolate without realizing it’s bad for them.

If you’re having a family gathering, perhaps for Christmas or a birthday, there may be non-dog owners in the group who are unaware that chocolate is bad for dogs.

These people may inadvertently leave chocolate lying about within reach of dogs simply through lack of knowledge – so make sure everyone present knows to keep chocolate away from dogs.

If you want to give your dog a chocolatey treat, you can let them have carob. This is a kind of chocolate substitute that dogs love – and it’s perfectly safe for them since it doesn’t contain any theobromine.

The best possible course of action is to make sure your dogs never have the opportunity to snack on chocolate. That way, you can avoid all the nasty-sounding issues that we’ve been talking about in this post.

However, if your dog does manage to steal a chocolatey treat and begins to feel sorry for herself as a result, it is vital to get the dog medical help as quickly as possible.

At the same time, there’s no need to panic. If your dog gets help quickly, the prognosis is good, and your dog should make a full recovery – and you can also take comfort from the fact that dogs dying from eating chocolate is rare.