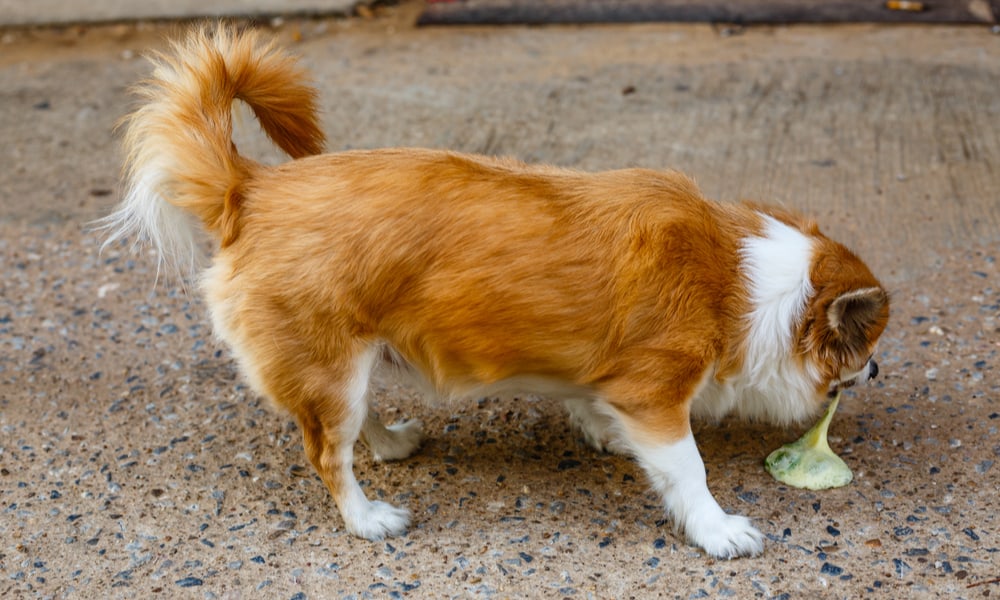 Are you alarmed by your dog’s behavior of slurping up his own sick? Dogs are cute and easy to love, but they can also engage in some very nasty behaviors, such as eating their own vomit!

Witnessing your pup retch, throw up, and then lick up all that stuff is not only stomach-turning but can also be very worrying. If you want to learn more about why dogs eat their own vomit, you have come to the right place. In this article, I will explain:

So, without further ado, let’s get straight to it!

Why Do Dogs Vomit?

Humans do not take vomiting lightly. When we vomit, it is often a sign that something is wrong with our health.

With dogs, vomiting isn’t always something to worry about. In fact, according to veterinarians, a dog vomiting 1-2 times a day is usually not a cause for concern unless other symptoms of sickness accompany this.

As a dog owner, you already know dogs are explorative eaters and will gobble up just about anything that smells or tastes like food.

Because they are generally not picky eaters, dogs tend to overeat, which increases their risk of vomiting, sometimes more than once a day.

That said, vomiting can also be a sign of illness. If your pup vomits regularly after meals, gastrointestinal distress might be a cause. This condition causes dogs to swallow food without fully chewing, resulting in regurgitation to find relief.

Other canine diseases such as kidney diseases, pancreatitis, bowel inflammation, liver problems, stomach ulcers, and many other illnesses can cause your dog to vomit. Swallowing any toxins or certain medicines can cause Fido to vomit too.

You should definitely visit your veterinarian if your dog vomits more than two times in 24 hours, whether or not you can observe physical symptoms of illness.

Now that we know why dogs vomit let us answer the question: why do dogs eat their own vomit?

Why Dogs Eat Their Own Vomit? 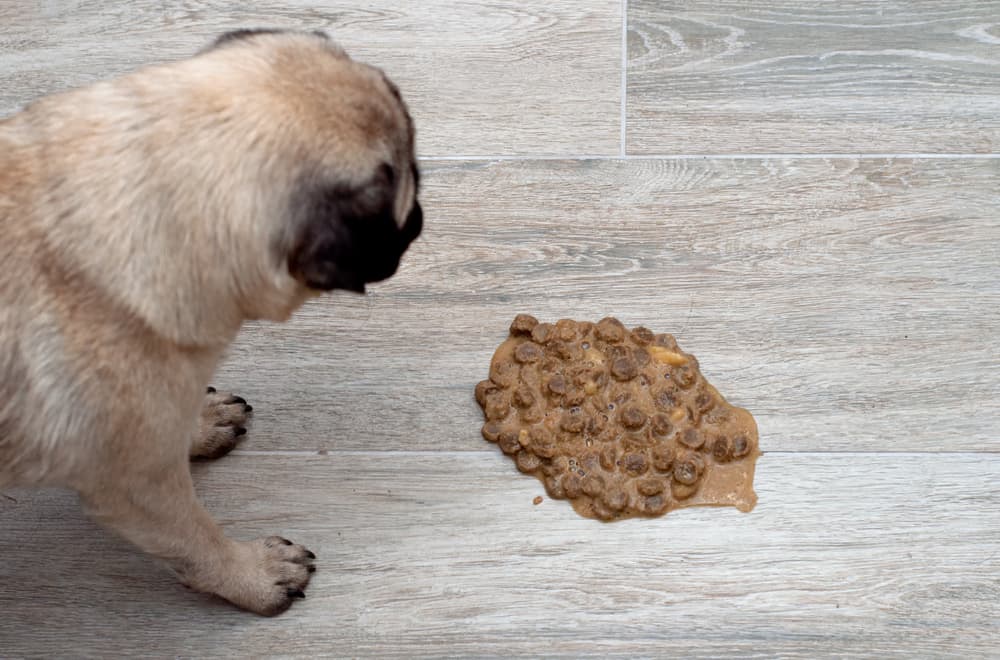 Dogs eating their own sick may not make any sense to us. But, there are perfectly good reasons your pup might slurp up his vomit without batting an eye. Let’s take a look at the various causes of this behavior:

1. It is a natural instinct

The first time you see Fido chow down a pile of vomit, this seemingly new behavior might catch you off guard. But, the truth is this is not new behavior—dogs grow up eating their mother’s sick!

The first few days and weeks after they are born, puppies cannot readily chew food independently. When the puppies are ready for solid foods, their mother’s first instinct is to find a way to feed her litter. She does this by eating and regurgitating the food and then feeding it to her puppies.

By supplementing her breast milk with chewed-up solid foods, Mama Fido is assured that her pups are well-fed and happy.

As you can see, dogs don’t start eating their own vomit suddenly in adulthood. It is something they grow up doing. You might say it is part of their upbringing and therefore they don’t hesitate to do it whenever they get a chance.

When you vomit, a few chunks of undigested food move from the stomach, esophagus, and out through your mouth.

While you might not think anything about these waste particles, the undigested chunks are like winning the lottery for dogs. In the canine world, these food chunks embroiled in the pile of vomit are a real treasure.

Dogs have a very strong sense of smell, and they can detect these undigested food chunks with their nose. Once Fido throws up, he will give his sick a nice and quick smell-over and dig into the vomit if food is detected.

As you might know, dogs are generally not picky eaters, a survival instinct they develop from their days in the wild. As such, your canine buddy will have no qualms chowing down their own sick if they detect the presence of some edible food in there—nothing goes to waste!

3. The dog is trying to hide illness

You would think your four-legged furry friend would want you to know if he was feeling unwell—quite the contrary.

Wild animals will hunt and prey on fellow animals that show any sign of weakness. Feeling unwell can easily make an animal quick prey, so the animal will try hiding, lest it be found in its vulnerable state by a predator.

Dogs, having evolved from the wild, behave similarly. If your canine vomits due to sickness, he might eat up the vomit to hide that he is sick.

Your dog’s intention is not to hide his illness from you. The dog doesn’t want other animals to know that he is feeling unwell and vulnerable.

Dogs living in a household with other animals are more likely to eat their own sick to hide their illness. This is a survival instinct—the dog simply doesn’t want to show other animals he is easy prey.

If your dog’s vomit-eating behavior is accompanied by abnormal behavior, it is a sure sign he is unwell and should be brought to the veterinarian. Watch out for symptoms such as lethargy, excessive salivation and panting, nasal discharge, whimpering, excessive thirst, limping, or any other strange symptom.

When you should be concerned by a dog that eats vomit 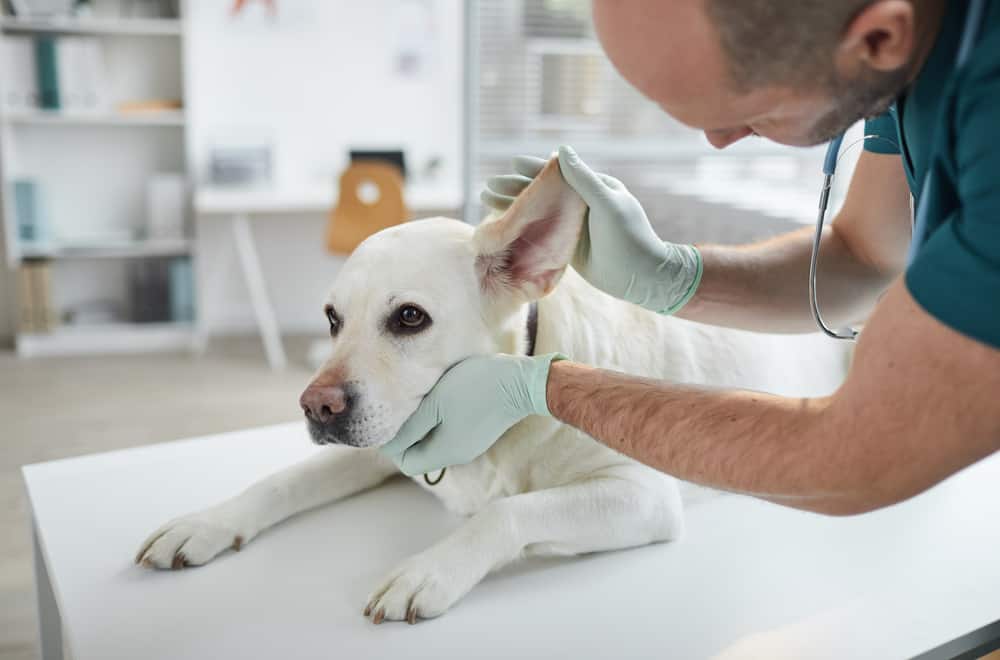 Catching your canine buddy eating his own vomit can be an unpleasant sight. But, generally, it should not be something to worry about.

Dogs actually eat their sick as a survival instinct. They may do it when they are sick to avoid being vulnerable to other animals. Your pup will also regurgitate and gobble up his vomit because he grew up doing this with his mother.

That said, you should still keep a close eye on Fido whenever vomiting occurs. The dog may vomit due to an inconsequential reason, such as overfeeding, but puking could also be a sign of a serious underlying issue.

If you catch Fido eating his vomit and then notice abnormal signs, you should be concerned. Some signs to watch out for are:

Vomiting and vomit-eating accompanied by these unusual symptoms indicate that your pet might be unwell.

Because it could be any number of problems, I strongly recommend taking your dog to the veterinarian for a conclusive diagnosis. Simple symptoms such as lethargy and vomiting can easily turn out to be serious health conditions.

I should also note that vomit contains a high amount of acid. When your dog vomits and eats the pile habitually, the acid could eat away at the dog’s teeth in the long run.

If possible, try to keep Fido from eating his sick to avoid some of these side effects.

What to do when your dog eats vomit 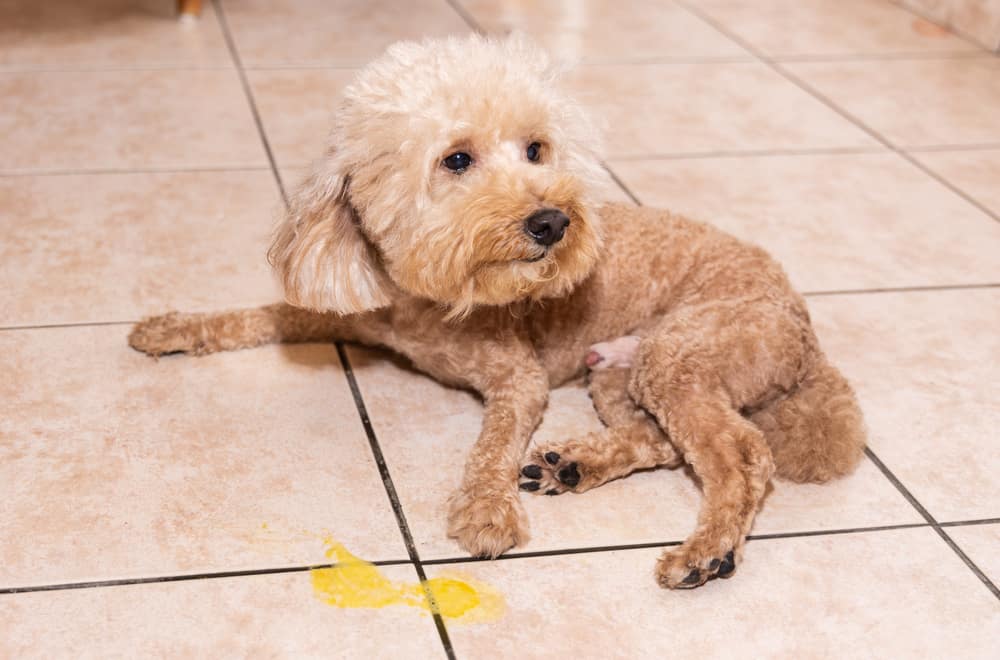 If your dog vomits and you turn around to grab a napkin only to find Fido has eaten the nasty pile, there is nothing much you can do at this point. Just go ahead and wipe his mouth and nose, as he might want to give you a nice, slurpy kiss.

On a more serious note, though, when your dog eats vomit, you should monitor him closely. If he vomits 2-5 times in 24 hours, something is probably wrong. Fido might be reacting from consuming a toxic substance, or he has fallen sick.

Don’t wait it out for unusual symptoms to pass—they probably won’t. Your best bet is to bring Fido to the veterinarian for a thorough check-up.

Summary: Why Do Dogs Eat Their Own Vomit?

Dogs eat their own vomit for good reasons, though it might not seem like it to us humans. Canines are brought up eating their mother’s vomit. Your pup may also engage in this behavior when he is sick to avoid being easy prey to other animals.

Overall, when a dog eats their own sick, it shouldn’t be a cause for concern. But, you should pay attention to why the vomiting is happening in the first place.

Take Fido to the veterinarian if you are worried about an underlying illness or if he shows abnormal behavior indicating illness.