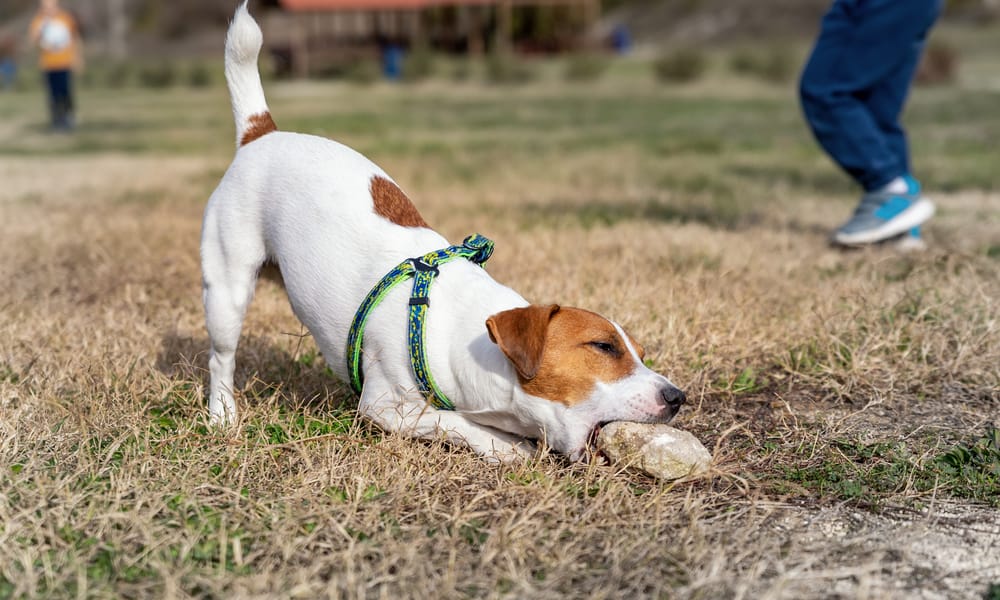 Dogs can do some pretty weird things, and that’s probably one of the reasons we love them so much – but they also have a penchant for eating strange items, ranging from the bizarre to the gross to the downright dangerous. And eating rocks belongs firmly in the third category.

If you see your dog eating rocks, it may cause you to worry. You’ll want to know why it’s happening, whether it’s normal behavior and what you should do to protect him. So to help with these issues and more, here we discuss the question, why do dogs eat rocks?

However, even when we’re talking about human pica and we can simply ask why the person is doing it, sometimes it can still be difficult to ascertain why this behavior is taking place.

This means that when it comes to animals, working out the cause can be even more of a challenge since they can’t tell us what’s going on.

Dogs and cats can develop forms of pica that involve eating grass, dirt, excrement and much more – and there’s no one reason that causes it. Rather, it can be driven by a whole range of factors, which we’ll come on to in a moment.

The important point to note here, though, is that while eating things like grass or poop might be strange or disgusting, often, they do no harm. However, eating rocks, technically known as “lithophagia”, is another matter.

Rock-eating is among the most dangerous forms of pica in dogs, and when it arises, it needs to be dealt with immediately. So let’s take a moment to think about why rock eating is such an undesirable behavior.

Why lithophagia is among the most serious forms of pica 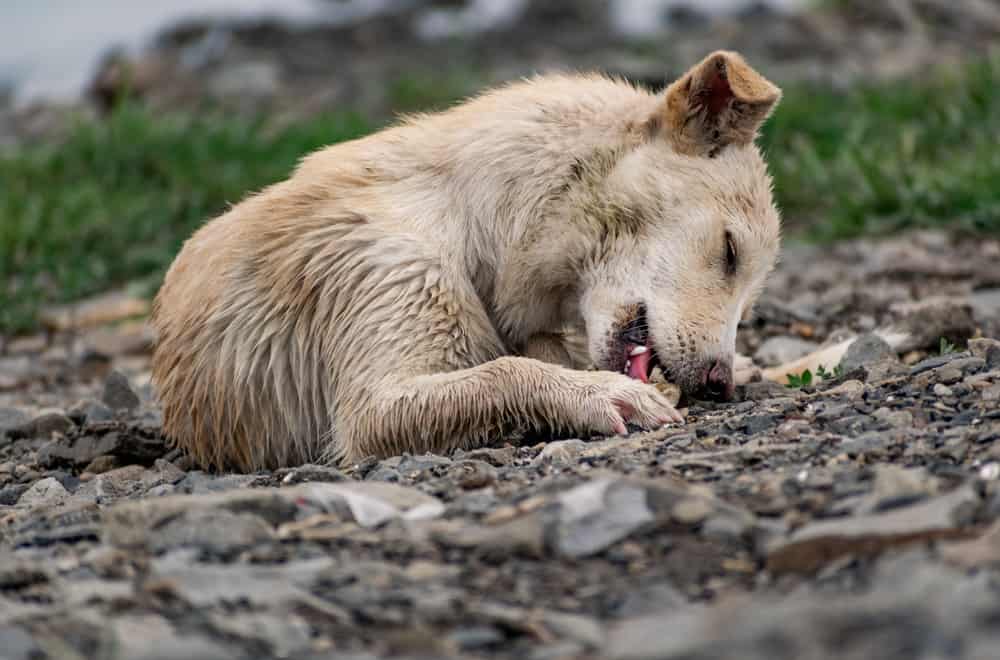 It will come as no surprise that consuming rocks can lead to a whole range of unpleasant health conditions in dogs. These may include some of the following:

If a dog consumes rocks and stones that then become lodged in the animal’s gut, it can cause a blockage, which may then require surgery to fix.

Blocked intestines can have all kinds of unpleasant and dangerous results. The dog will probably have trouble obtaining enough nutrition from its food, which will, in turn, lead to a lack of energy, lethargy and perhaps vomiting.

Another serious result of eating rocks is that they can perforate the dog’s stomach or colon. Signs of this could be obvious pain or discomfort as well as vomiting blood or bloody stools.

Chewing on hard stones, even if they are not then swallowed, can chip, wear or break a dog’s teeth. This will then require a trip to see the doggie dentist, which will cost money, and since dental work in dogs is carried out under anesthesia, there is always an added inherent risk.

At the very least, a dog that eats rocks is likely to suffer from an uncomfortable upset stomach, and in this case, vomiting, diarrhea – or both – can occur.

There can be many causes for this behavior, including medical, nutritional, psychological or behavioral reasons. Here are some of the most common:

Sometimes, underlying medical conditions may cause pica, including lithophagia, to arise in dogs.

Often, this will be because the dog has a disease that means it can’t obtain enough nutrients, vitamins or minerals from its food and so begins eating other items as a way of supplementing its diet.

Conditions that might cause rock-eating behavior include things like exocrine pancreatic insufficiency, diabetes, inflammatory bowel disease or others.

Another possibility is that the dog is suffering from intestinal parasites, which can have a similar result.

Even if the dog isn’t suffering from a medical condition, rock-eating could be down to a nutritional deficiency due to a poor diet.

If the dog isn’t receiving everything it needs from the food it is given, it will instinctively try to supplement its diet with whatever it finds, which could result in rocks and stones finding their way onto the menu.

3. Puppies exploring the world through taste

Like human babies, puppies often like to explore their new world by tasting everything they find, and this could include rocks.

Although it’s not a good idea to let puppies eat rocks, this is perhaps one of the least worrying causes of lithophagia since it is a natural behavior, and most dogs will grow out of it naturally before the end of their first year.

Dogs are intelligent, social animals, and they need interaction with people and other dogs to lead a happy and fulfilling life.

If your dog spends long periods alone or doesn’t receive enough attention, it may develop behavioral issues like pica, including lithophagia.

If a dog is anxious or stressed, similar behaviors may occur. Just in the same way that some people chew their fingernails, dogs may develop what are known as displacement behaviors to comfort themselves.

These may include things like excessive panting, lip licking, shaking off when not wet, excessive grooming – and pica, including lithophagia.

Another reason dogs begin eating inappropriate items such as rocks is through boredom. If a dog doesn’t have enough stimulation in its life, it may start chewing and swallowing rocks just to give it something to do.

7. Smells or food on rocks

One possibility is that a dog detects odors or traces of food on rocks, which causes it to eat them.

For example, if other animals have marked the rocks, this could give them an interesting flavor for the dog. Similarly, if the rocks taste of old food, the dog could mistake them for a real food item and decide to consume them.

What to do if you see your dog eating rocks

So as we have seen, there is a wide range of reasons for a dog to start eating rocks, but what should you do if you catch your pet in the act or suspect he has just scoffed down a mouthful of gravel?

Although eating rocks is a highly undesirable behavior, if you think your dog has just swallowed some, there’s no need to panic.

There’s a good chance that the stones will simply pass through the dog and come out the other end, and if it’s just a one-off, that will be the end of it.

To help with this, you should give the dog some extra fiber in his diet for the next day or two to help the unwanted material move through his digestive system and exit naturally when the dog does his business.

It might not sound pleasant, but it’s a good idea to monitor the dog’s poop to check that the stones have come out with the stool.

If the stones don’t make a natural exit – or if they were of a larger size – you are better off taking your pet to see a vet at the earliest possible opportunity to get some professional advice.

If the rock-eating episode is a one-off, and your dog doesn’t show any ill effects, you don’t need to do anything more than keep an eye on him to make sure it doesn’t happen again. But what if your animal develops a taste for eating rocks? Let’s talk about this now.

What to do if your dog is a serial rock-eater 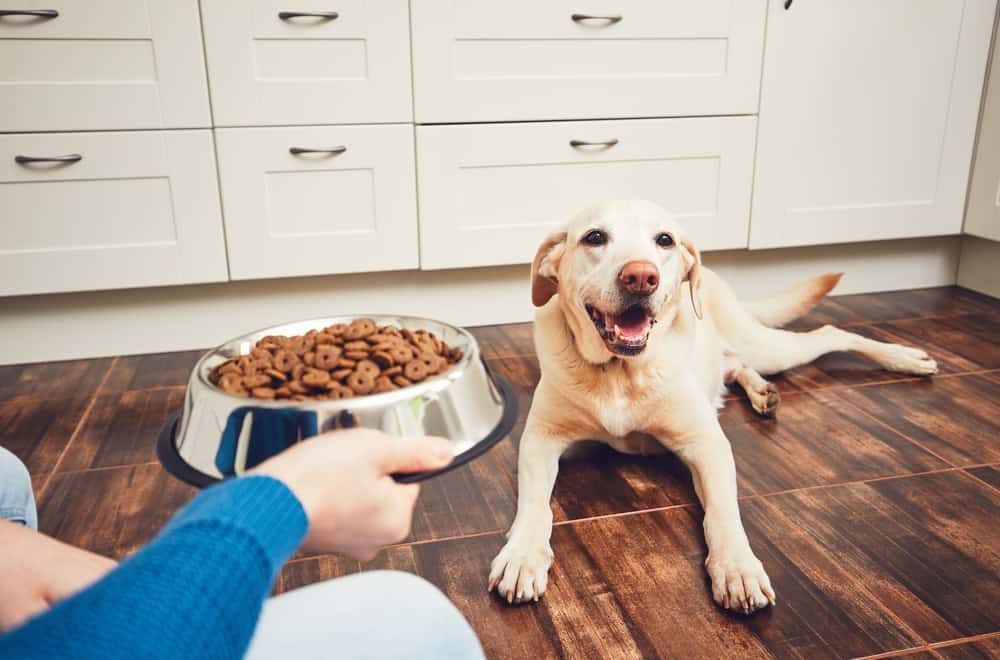 If your dog just eats rocks one time, as long as it doesn’t affect her health, it’s probably not too much to worry about. However, if you think she is developing a rock-eating habit, you’ll need to act quickly to stop it.

The first step is to work out why she has developed this undesirable habit since this will help you work out the best course of action to follow. Here are some suggestions:

If you think your dog is suffering from an undiagnosed medical condition that could be causing the rock-eating, the best thing to do is take her to see a vet.

Think about the kind of food you feed your dog and consider whether it is providing all the necessary nutrients to keep your dog healthy.

If you only give your dog kibble, you might try feeding her a more varied diet, including some raw meat. Providing bones for your dog to chew can also help provide necessary minerals like calcium that dogs require.

Think about the lifestyle your dog leads and try to work out if he has enough social interaction, exercise and stimulation in his life.

Try to spend more time with your dog, take him for longer walks and make sure you play some energetic games like fetch or tug-of-war.

Also, give your dog new toys to play with rather than just leaving him the same old ones he’s always had. Think about it – human children (and adults too!) get bored of playing with old toys, and dogs are no different.

If the issue is behavioral or psychological rather than medical or nutritional, you’ll also have to work on training your dog, especially if the habit has become ingrained in his behavior.

Practice using commands like “leave” and “drop it” to tell the dog not to eat rocks or to drop them if he gets them in his mouth.

Distract the dog from rocks, and always use positive reinforcement when he does as he’s told.

At the same time, don’t yell at the dog and don’t overreact. This may cause the dog to swallow a stone he was only going to chew, and it may even reinforce the rock-eating behavior since the dog sees it as a fun game and a way to get your attention.

Part of breaking a rock-eating habit will be patient supervision of your dog on walks or even when she is just playing in your yard. Keep an eye on her at all times to make sure she doesn’t try to eat rocks, and keep working on those commands if she does.

At the same time, you should remove any rocks and stones from where she plays to restrict her access to them. If she doesn’t have rocks available, she won’t be able to chew or swallow them, and after a while, this may help to break the pattern of behavior.

Rock eating is an undesirable and potentially dangerous behavior in dogs, and if you spot it, it should be discouraged as quickly as possible. You should also be aware of the possible health implications and take to your dog to see a vet immediately if you think there is a problem.

If your dog develops a rock-eating habit, the first thing you need to do is work out why it is happening. This will then allow you to take the necessary steps like seeking medical help, changing the dog’s diet, spending more time with the dog or working on training.