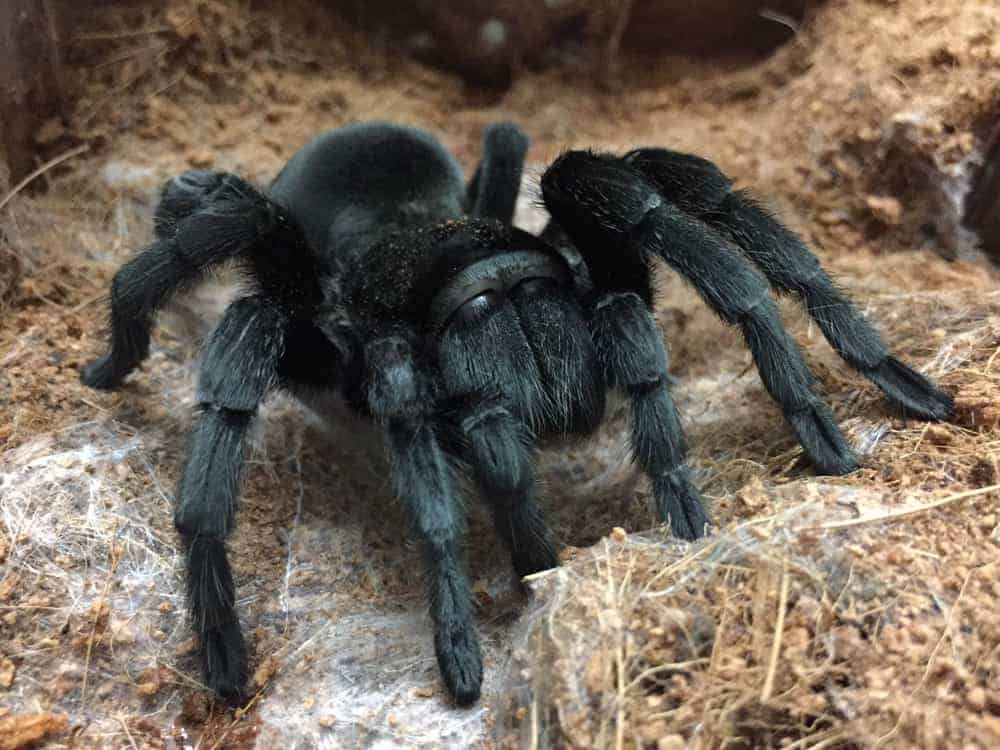 The Brazilian Black tarantula is a simple arachnid with an inherently low-key sophistication.

With its solid Black, almost velvety body, it grows and moves slowly, with grace; it has nothing to prove. Its beauty speaks for itself.

Unsurprisingly, this tarantula is highly sought-after in the pet trade. Getting a hold of one can be difficult given their scarcity both in the wild and captivity.

If you are looking to keep one as a pest, you have come to the right place. This guide on facts about Brazilian Black tarantula will provide all the information you need for your new hobby.

The scientific name for the Brazilian Black tarantula is Grammostola pulchra. This species belongs to the Theraphosidae family of arachnids.

Grammostola pulchra is native to Brazil, making it a New World organism.

New World and Old World tarantulas demonstrate stark differences. As a New World organism, the Grammostola pulchra is less aggressive and defensive, and its venom is not fatal for humans. 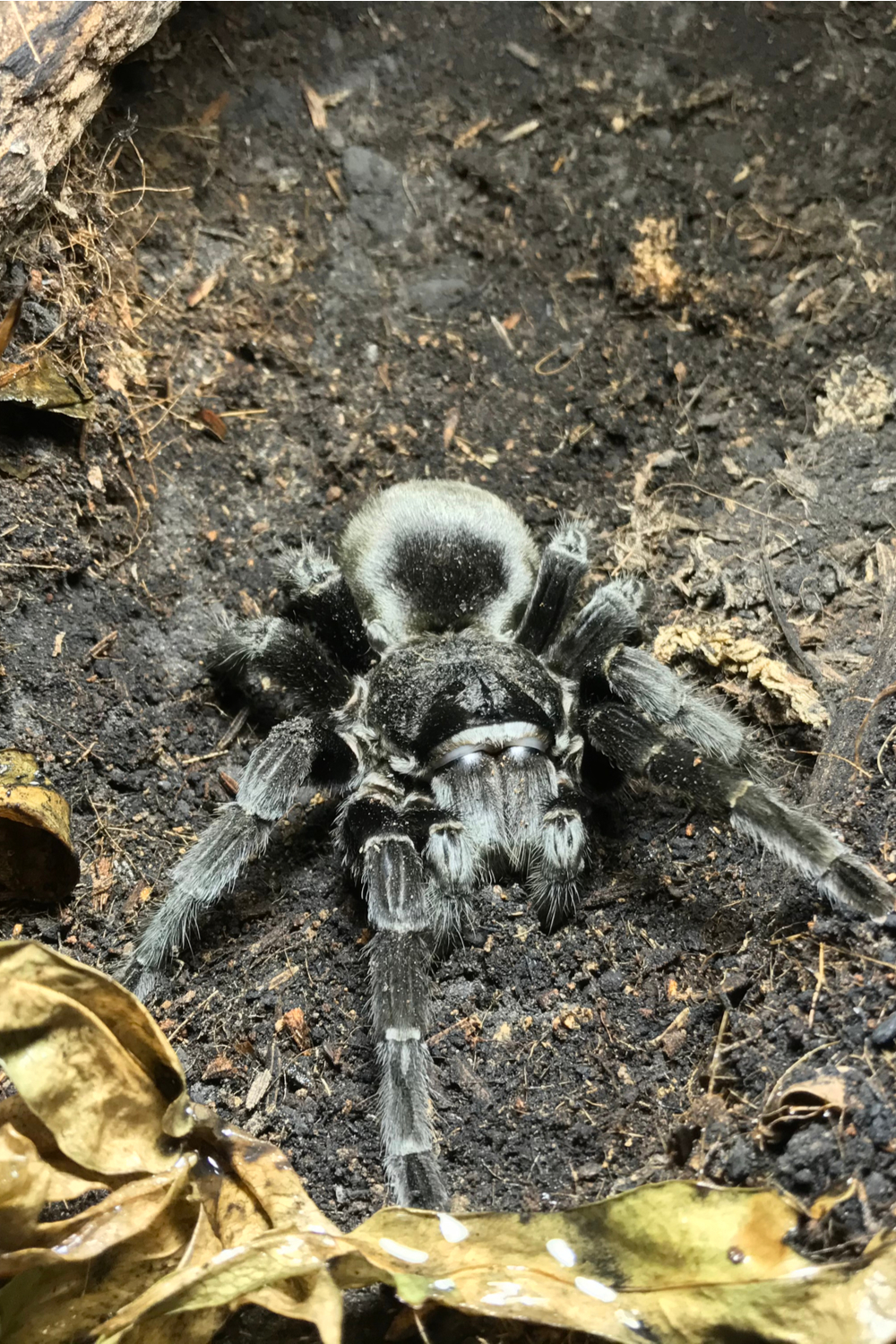 The Brazilian Black is a medium-sized tarantula. It is more stout and compact than it is long.

A fully mature member of this species can grow to up to 8 inches. But, most Brazilian Blacks have a diagonal diameter of about 6 to 7 inches.

Like other tarantulas, the female Grammostola pulchra outlives the male by far. The life span of a female is 20 years and more, while their male counterpart’s life span is 6 to 8 years.

The Brazilian Black tarantula is native to the grasslands of Uruguay and Brazil. In the wild, it is a terrestrial organism, spinning webs and burrowing tunnels on the floor in which it lives.

In captivity, the Grammostola pulchra will need more or less the same environmental conditions as its natural habitat. A slightly arid environment is ideal.

The requirement for a dry terrarium is quite different from what other tarantulas in the same genus require—some moisture.

The enclosure for a Black Brazilian tarantula should be 2-3 times larger than the organism’s leg span. The terrestrial nature of this species requires the enclosure to be longer and wider than deeper.

Cross ventilation in which holes are put in the side of the enclosure is more ideal than top ventilation.

Black Brazilian tarantulas will easily die if they fall from the terrarium to the floor. A deep rather than a high terrarium would be ideal for this species to prevent falls.

This tarantula is described as an ‘opportunistic burrower.’ Even in its natural habitat, it doesn’t dig extensively, and when it does, it isn’t out of necessity.

When preparing its home in captivity, pay attention to substrate type and usage. For the terrestrial animal that the Brazilian Black tarantula is, the substrate should be at least four inches deep to prevent fatal falls.

This species does best in humidity levels ranging between 60 and 75 percent. Adults can go for an extended time without food and water.

Grammostola pulchra juveniles must stay hydrated at all times. Always keep a bowl of water in the terrarium. Apply a bit of water to the sides of the terrarium to provide a source of water for the young ones.

In the wild, the Black Brazilian tarantula lives in an environment with temperatures in the 60 to 70 F range. In captivity, these tarantulas do well at room temperature. 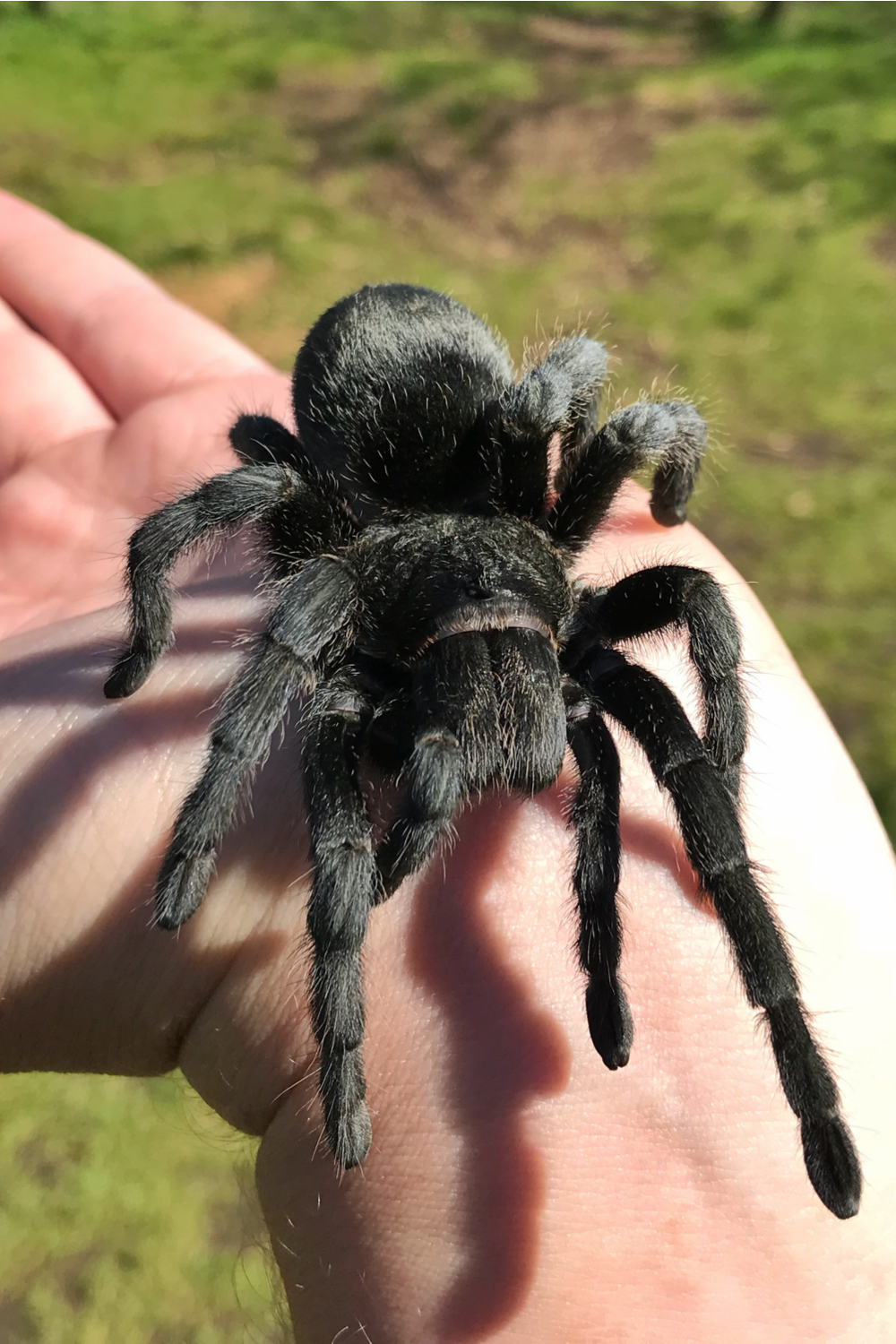 Like many other tarantulas, the Brazilian Black is nocturnal. It will come up from its hiding place to hunt and forage for food at dawn or dusk.

In the wild, these tarantulas use their senses to detect the vibrations of nearby prey.

The Grammostola pulchra is not an avid weber. It relies on both sheer strength and its senses to capture its pray.

Instead of spanning webs, it burrows tunnels and holes in the ground where it goes to hide. Hunting involves quietly positioning itself close to the burrow’s entry and lying in wait for its prey.

The tarantula grabs its prey with its forelegs, bites in, and injects a digestive enzyme to subdue the prey.

The Brazilian Black tarantula has a calm and complacent personality. It takes its time in whatever activity.

While many tarantulas are known for their quickness, the Black Brazil tarantula is the opposite. It moves slowly, oblivious of any potential threats.

Even when startled or handled, this tarantula will rarely flick their urticating hairs.

The Grammostola pulchra does, however, have venomous fangs and will use them when faced with a perceived life-threatening intrusion.

This tarantula can be handled even by a beginner if you are not overly excited and startle the spider unnecessarily.

Like many New World species, the venomous bite of a Black Brazilian tarantula is painful but only moderately potent. There are no reports of human deaths resulting from bites by this species.

The Grammostola pulchra is carnivorous. In the wild, it will eat mice, worms, cricket, lizards, and more.

This tarantula will enthusiastically snatch up mealworms, locusts, roaches, crickets, lizards, and pinky mice in captivity.

Food such as lizards and mice should be offered in moderation. These preys contain a high amount of calcium, hardening the spider’s exoskeleton and causing molting problems.

Foods containing pesticides or those contaminated by parasites/bacteria should not be fed to this spider. These foods can ultimately result in the death of the tarantula.

The Brazilian Black female tarantula is extremely selective with whom it mates. It will not mate with just any male you introduce to her and may end up killing him instead.

In captivity, avoid leaving female and male Grammostola pulchra overnight in the same enclosure. The chances are good that the male will be dead by morning.

Whenever possible, mate the tarantulas at a time when you can observe them. If the female is receptive, mating should take place as soon as you introduce the male.

Remove the male Grammostola pulchra as soon as mating is complete.

Female Black Brazilian tarantulas can lay about 650 eggs in their egg sac. The eggs will hatch into full spiders 2-3 weeks after mating.

In the wild, these species typically live in solitary conditions. When mating season is here, usually between June and September, the male will approach a female’s burrow for mating.

If the female is receptive, the male Grammostola pulchra will deposit sperm into the female’s receptacle in her abdomen, essentially impregnating her.

The male will first weave a web mat on the surface of the floor. The tarantula then rubs his abdomen on the silky web mat to release semen.

The male spider dips his pedipalps or appendages in the semen. The pedipalps absorb and store the semen until the spider can find a mate.

When the male and female spiders encounter each other, they signal that they belong to the same species.

This initial encounter and the exchange of signals can cause the female to relax into a receptive state. This allows the male to insert his pedipalps into the lower opening of the female’s abdomen, also known as opisthosoma.

The female Grammostola pulchra fiercely guards her egg sac and exhibits more aggression. She will turn the sac regularly to prevent the sac from deforming. This process is known as brooding. 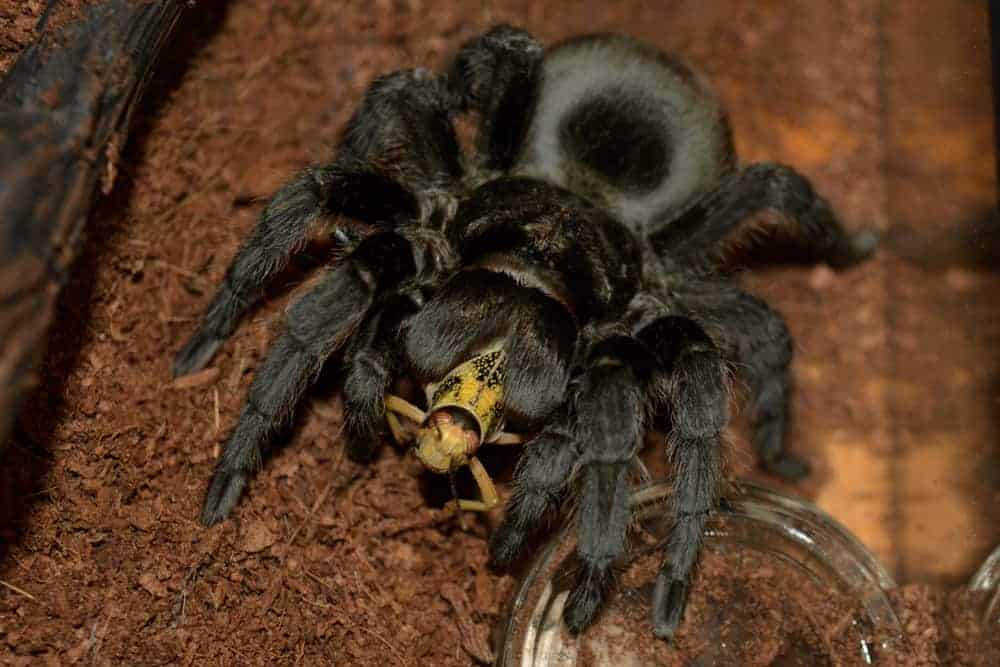 Like all other tarantulas, the Black Brazilian undergoes a process of molting. Before molting, this species will take on a darker hue and, as is customary, will refuse to eat.

The spider may also become lethargic and hide for the duration of the molting season.

Molting is an extremely intense and exhausting process for spiders, and some may get sick. A Black Brazilian tarantula that falls sick from molting will sit on its legs, and its abdomen may look shrunken.

The males are typically smaller with a narrow abdomen. They usually appear duller than the females.

Mature male Grammostola pulchra will have tibial hooks on their forelegs. These hooks protect it from the female’s bite during copulation.

The males typically have longer legs than their female counterparts.

The sex of a juvenile Grammostola pulchra can be determined by examining a cast molt for spermathecae.

Males have a short lifespan of 6-7 years, while females can live for 20 years. Most males of this species will die soon after maturity, and few live long enough to undergo the ultimate molting process.

Like other species, the male Brazilian Black tarantula tends to have its sexual organs stuck in the molt, a painful incident that ultimately leads to its death.

The Brazilian Black tarantulas are generally healthy. They can survive in the wild and captivity without falling sick for the entire duration of their life.

Feeding your tarantula a healthy high-protein diet and housing it in the right conditions will ensure a long, healthy life.

The Grammostola pulchra prefers semi-arid conditions. Except for the spiderlings, keep moisture to a minimum when dealing with this species. 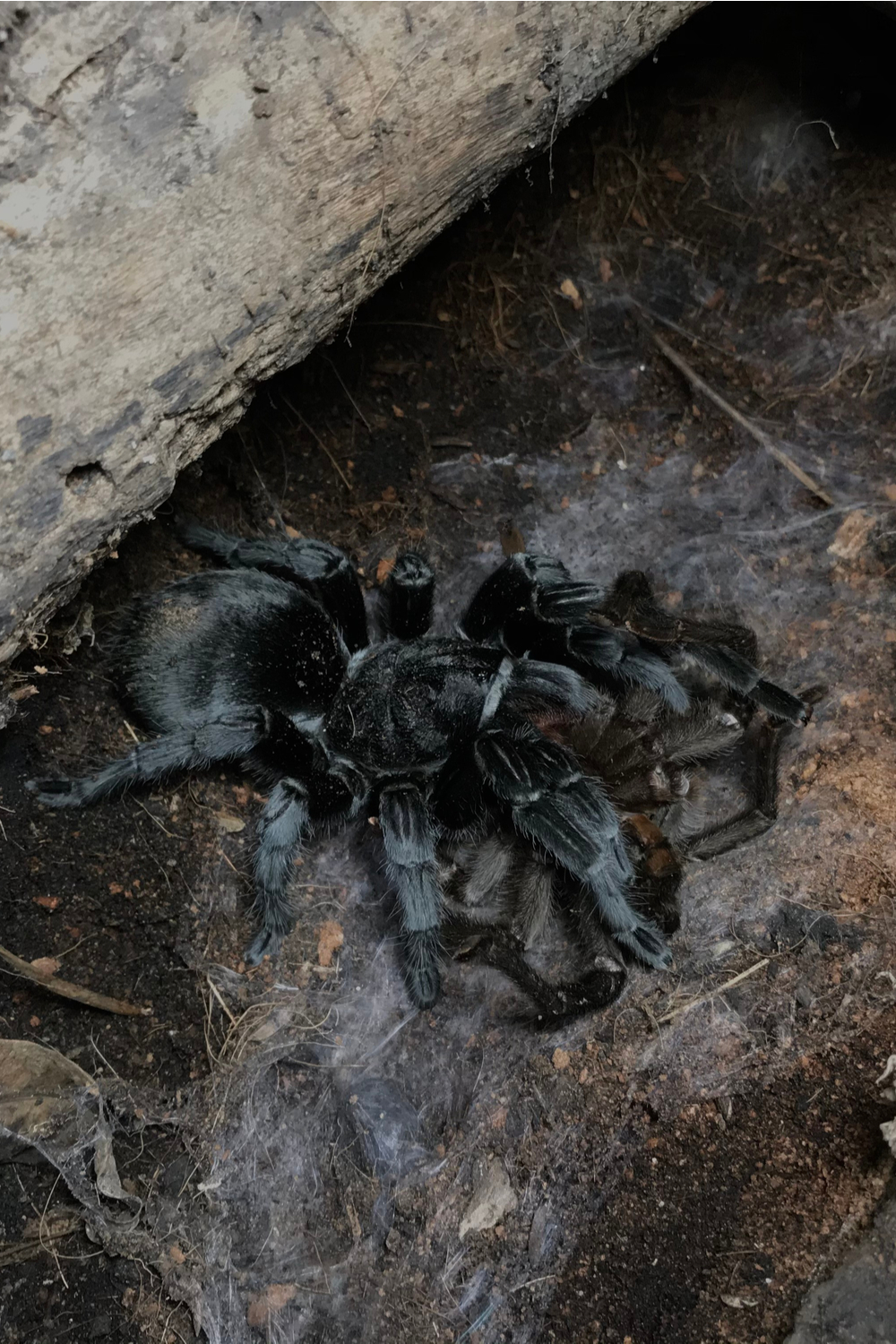 It is hard to talk about the Brazilian Black tarantula without mentioning its massive popularity as a pet.

This spider is sought-after because of the female’s long lifespan. Female Grammostola pulchra can live for up to 20 years, and some clock the 30-year mark.

The velvety dark coloration gives it an appealing, classy and elitist look. It is why this species is sought-after among high-end keepers of exotic animals.

This spider’s docile and friendly personality also sets it apart, making it a safe choice for beginners and anyone wanting to handle a tarantula.

Its desirability as a pet is increased because both the female and male Black Brazilian tarantula don’t flick their urticating hairs when handled, as is the case with other species.

The mature female Grammostola pulchra grows slowly, which contributes to the scarcity of this species. In some countries, the trade of the Brazilian Black tarantula is banned.

All these factors combined make this tarantula particularly expensive to purchase from a reputable breeder.

The care and maintenance of this spider are no different from others. But expect to part with a couple of thousand dollars for a female Brazilian Black tarantula.

The Brazilian Black tarantula is a rare gem. It bears all the great qualities of a New World species—it is gentle, graceful, and well-mannered, not to mention gorgeous in its own right.

Although relatively expensive to acquire, the benefits of this spider as a pet outweigh the downsides. As a terrestrial, it is generally low maintenance, predictable, and emotionally rewarding for any keeper.

I hope this guide on the facts about Brazilian Black tarantula will help you make a smart decision if you are considering being a ‘spider parent’ to this wonderful species.