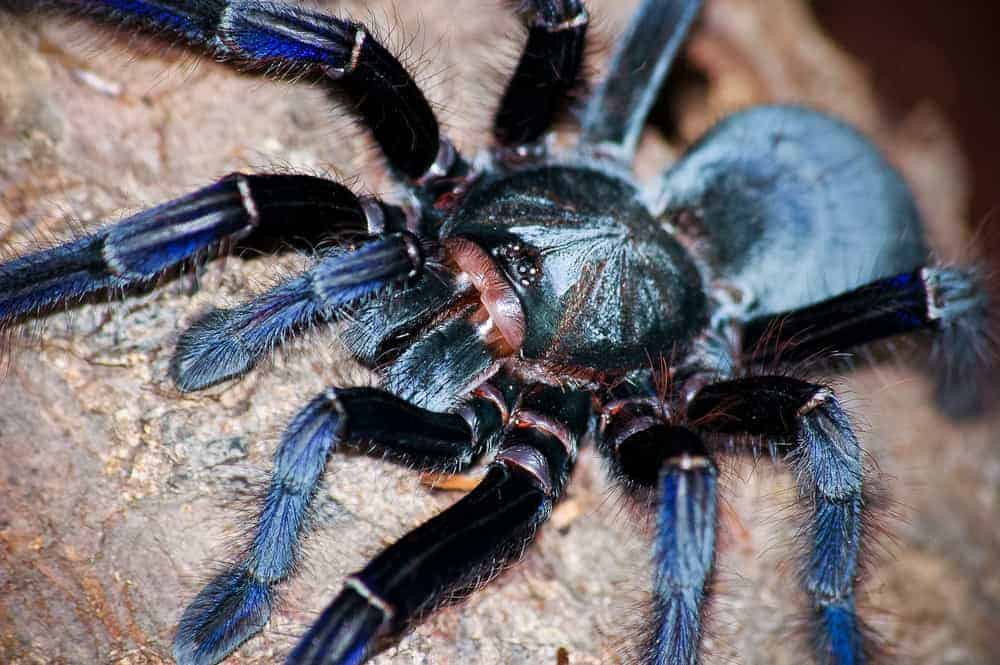 The Singapore Blue tarantula has a lot going for itself. It boasts a comparably large leg span, and its iridescent blue color gives it an attractive glow.

But, like all Old World species, the Blue Singapore tarantula can be aggressive and difficult to handle.

If you are thinking of adopting a Singapore Blue, it helps to learn everything you can about this spider to make an informed decision.

I wrote this round-up to help you do just that. Read on to find out some interesting facts about Singapore Blue tarantula.

The scientific name for the Singapore Blue tarantula is Omothymus violaceopes.

This giant spider is of the Theraphosidae family to which more than 1,000 spiders belong.

Organisms in the Theraphosidae family belong to the order Araneae and the suborder Mygalomorphae.

The Singapore Blue is a true tarantula, despite belonging to the Mygalomorphae infraorder of false tarantulas.

This tarantula species further belongs to the genus Omothymus.

In 1924, H.C. Abraham described the Singapore Blue as Lampropelma violaceopedes. In 2019, the species was classified under the genus Omothymus.

The Singapore Blue is an Old World tarantula originating from Singapore and Malaysia. 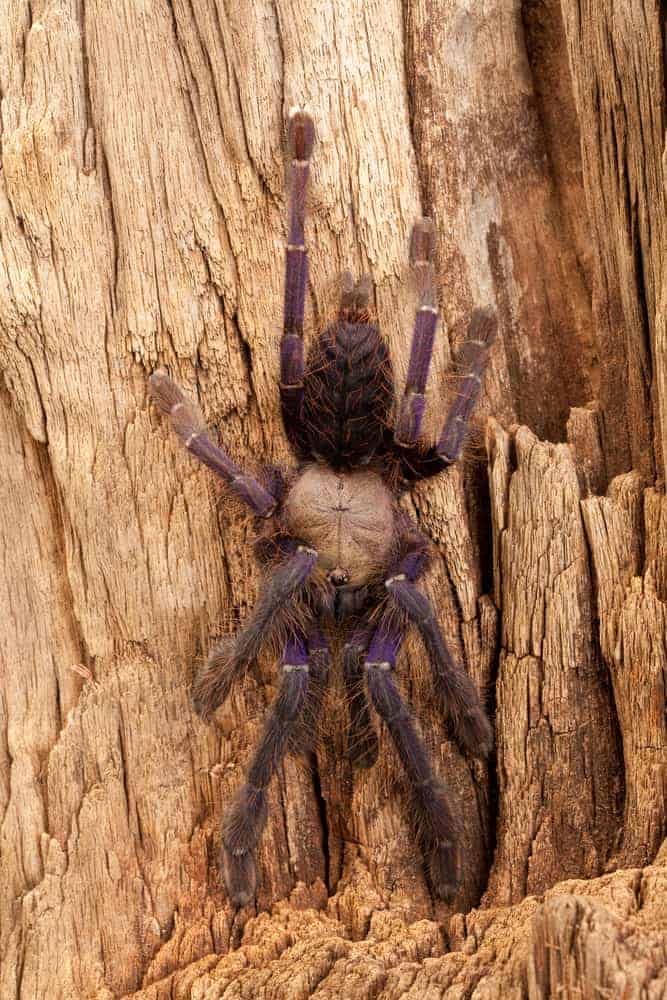 The Blue Singapore is a large tarantula with an incredible leg span spreading out to 9 inches.

The female species features brilliant blue legs that are pointy toward the ends. They have a white or off-white colored carapace and stripes around their abdomen.

Male Omothymus violaceopes are duller with a light brown or dusty gold appearance. Their legs are also a duller shade of blue.

The male is generally smaller than the female, with a narrower abdomen and carapace. The male’s legs are, however, slightly longer than those of the female Singapore Blue.

The lifespan of a female tarantula is 14 years, while that of males is 6-7 years. The long lifespan of females makes them attractive to keepers.

The Singapore Blue tarantula is a big eater. In captivity and the wild, this spider will not hesitate to snatch up its prey at the first chance.

This tarantula can paralyze large prey such as rats, birds, and big lizards. In captivity, though, it is best to feed the spider smaller portions of food at any given time.

Generally, the size of the prey fed to this tarantula should not be bigger than the spider’s abdomen.

Being a voracious eater, the Singapore Blue can attempt to take down large portions of its prey, easily leading to chocking

In captivity, minimize the chances of choking through portion control.

Generally, feed younger spiders with 2-3 small crickets at least once a week. The portion size can increase as the tarantula grows bigger.

At least two medium-sized crickets per week are good enough for a juvenile tarantula. A large Singapore Blue will need at least ten crickets every four weeks.

The duration between feeds may increase as the spider becomes bigger and its growth rate slows down.

Aside from crickets, Singapore Blue tarantulas also feed on locusts, worms, and cockroaches. In the wild, rats and birds also make up parts of their diet.

In captivity, the diet should closely resemble the tarantula’s diet in the wild for optimal growth.

The Singapore Blue is native to Singapore and Malaysia. Both regions have a hot and humid climate to which this tarantula is adapted.

Similar arid and semi-arid conditions should be mimicked to ensure the tarantula ultimately thrives.  Higher humidity is a requirement for the survival of the Singapore Blue species.

Spraying the terrarium or enclosure in which the spider is housed will help achieve the ideal humidity condition.

The terrarium should be well ventilated to avoid air being trapped inside and increasing the likelihood of fungi and mold.

The Blue Singapore is an arboreal spider. It burrows holes and tunnels in trees where it spends most of its time. In captivity, this giant tarantula will require housing that emphasizes height or depth, more than the width and length of the enclosure.

Due to their large leg span, this species requires an enclosure 2-3 times the length of the spider. This will ensure enough climbing and crawling space without the risk of the spider falling.

Around 5-6 inches of substrate is needed for the Blue Singapore species to burrow comfortably. Regularly watering the substrate ensures optimal humidity levels.

Being arboreal species, these tarantulas will need items on which to climb when in captivity. Adding foliage and branches to the enclosure can help mimic the wild environment as closely as possible.

Aside from the enclosure size in which a Blue Singapore in captivity is kept, environmental conditions should closely mimic those of the wild.

Temperatures in Singapore and Malaysia generally range between 77-86 F.  The Singapore Blue tarantula will thrive the most when kept in an enclosure with temperatures in this range.

The Omothymus violaceopes have a fast growth rate. They require a good amount of heat and temperature for optimal growth.

Low or less than optimal temperatures will stunt the growth of the spider and can decrease its lifespan.

The terrarium hosting a Blue Singapore should be kept in a warm spot in the room. A heating pad may also be used during winter to keep the enclosure warm.

The Omothymus violaceopes will generally hang out on top of any object, mimicking a tree that you place in the enclosure. The spider will hardly come down to drink water. Spraying it with room temperature water can help to keep the spider moist and dehydrated.

When kept as a pet, the Omothymus violaceopes will need a simulated tree trunk. The spider can climb up and down and hide when faced with a threat, as they would in the wild.

Using corn bark, leaf litters, and silk plants can help to give the terrarium a more natural look and feel, allowing the tarantula to thrive even in captivity. 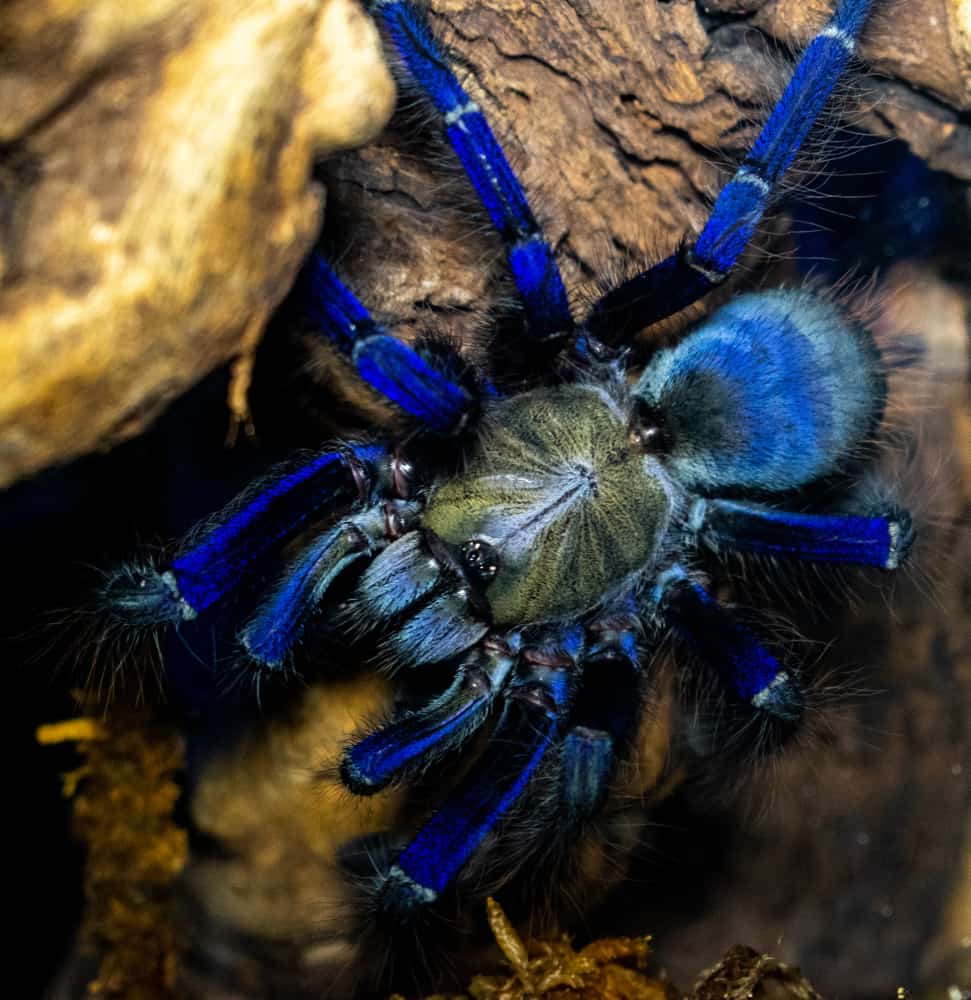 The Blue Singapore is an Old World tarantula. Old World species are native to regions outside of the Americas.

Old World tarantulas can be found in Africa, Asia, Europe, and the Asia-Pacific regions. New World species are native to the Americas. They inhabit North America and Canada, South and Central America.

There are some critical differences between Old and New World species. In the world of tarantulas. Old World species tend to be more aggressive and flighty.

Being an Old World species, the Singapore Blue tarantula is quite aggressive and defensive. It does not have urticating hairs, meaning biting is its first line of defense.

The Omothymus violaceopes will quickly assume a threat pose, ready to attack when faced with perceived danger. Anything from touching to accidentally startling it can trigger the spider and cause it to bite.

The bite of a Singapore Blue is not venomous to humans. But, the bite is excruciatingly painful and can cause severe symptoms such as muscle cramps, vomiting, and nausea.

The tarantula’s bite is, however, fatal to its prey. Once it gets a hold of its prey, it releases an enzyme that liquefies it, making digestion easier and faster.

Due to its aggressive nature and willingness to attack at any chance, the Singapore Blue tarantula should not be handled, especially if you are a beginner hobbyist.

Avoid holding the spider with your bare hands when moving it from one point to another, as it might sting you.

Squeezing the abdomen or carapace can lead to the death of the species if your veterinarian does not provide medical attention soon. You should also be careful not to drop the spider, as a fall can result in fatal injuries and even death.

The Singapore Blue tarantula does like to be lifted or fidgeted with. If handling this spider is necessary, such as when moving or transferring it from one terrarium to another, the process should be done fast and seamlessly to avoid startling the spider.

The Omothymus violaceopes is fossorial and nocturnal, factors to keep in mind when housing this species.

Fossorial species are adapted to living underground as opposed to above the ground. The Blue Singapore builds webs and burrows tunnels as well as part of its habitat.

Both the webs and talent allow it to hide far away from potential threats. The spider also uses the webs and burrowed tunnels to lay quietly in wait for unsuspecting prey.

When kept in the dark, quiet place, the Singapore Blue tarantula will emerge from the depths of its webs and tunnels and come to the foreground to look for food or water or catch some air.

Due to their aggressive tendencies, this tarantula should be given a wide berth. Even when simply observing it, be sure to do it from afar.

The Omothymus violaceopes are among the hardiest tarantulas. They are quite independent and will require little help getting by.

This tarantula requires wide enough horizontal and vertical spaces to live a full life. Cramped quarters can cause this organism to become irritable and more aggressive.

Generally, this tarantula is healthy all around with few if any medical issues. Avail the right size enclosure and provide optimal temperatures and humidity that closely mimic that of Brazil’s tropical rainforests.

Given that this species is a voracious eater providing enough food in the right portion in correctly spaced out sessions will ensure the spider is neither too big nor too small for its age.

Like other tarantulas, molting will cause the Omothymus violaceopes to stop eating. The species may also show other signs of sickness, such as being lethargic, withdrawn, and a general feeling of malaise.

These symptoms don’t necessarily indicate illness. They could just be a result of molting, an exhausting and sometimes fatal process of shedding the exoskeleton. 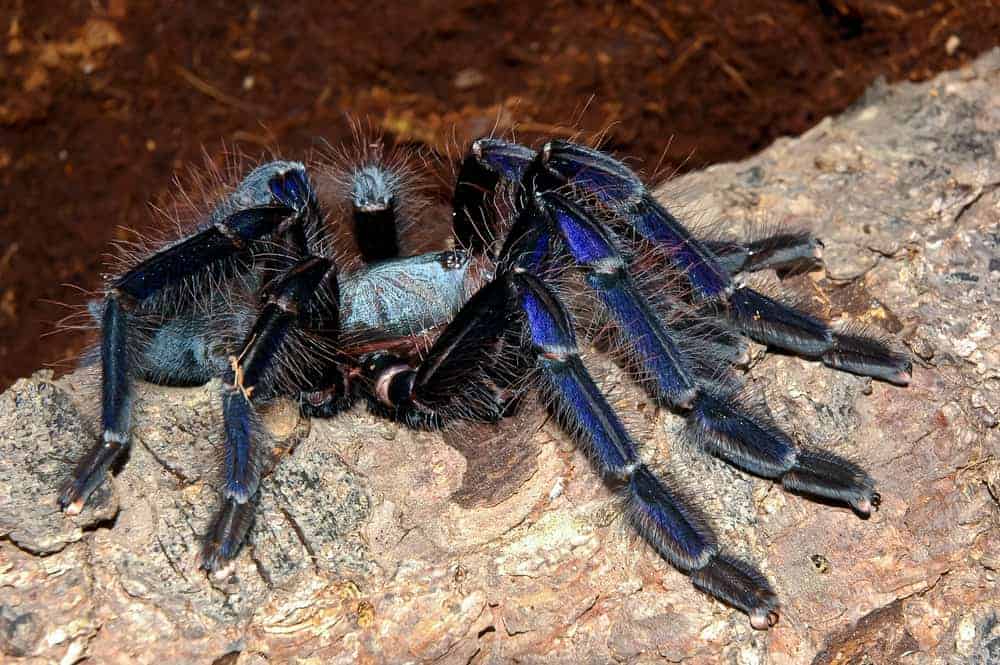 Like most tarantula, the female species is larger than the male. The female Omothymus violaceopes can be aggressive toward potential mates.

Although rare, female Blue Singapore can eat its male counterparts as part of a successful rating.

Ideally, the male should be introduced to the female after molting. The female is more receptive during this time than any other time in her life.

When the male is ready to mate, it will tap its pedipalps to draw the female’s attention. If the female is receptive, she will allow the male to lift her and deposit the sperm in the lower opening in her abdomen.

Following successful mating, the female Singapore Blue lays an egg sac of up to 100 eggs. After 8 to 12 weeks, the eggs will hatch into tiny spiderlings.

The Singapore Blue tarantula is relatively rare on one side, and on the other, there is plenty of demand for it.

The rarity and high demand tend to make the Omothymus violaceopes pricey. In fact, it is one of the most important tarantulas.

There is a large price difference between a male and female Blue Singapore. It is common for females to be sold more than five times the price of the male. Spiderlings are generally cheaper, setting you back a few dollars.

Female Omothymus violaceopes are costlier and preferred because of their long lifespan. Males tend to die as soon as they attain maturity.

There is no doubt the Singapore Blue is an attractive and captivating tarantula. From its long legs to its shimmery blue hues on its body, it does take the crown as a respectable giant spider.

But, this tarantula is an Old World species. It lacks urticating hairs, and biting is its first line of defense.

If you choose to adopt this spider, it is important to keep in mind its aggressive and defensive personality.

Hopefully, these facts about Singapore’s blue tarantula will help you make the right decision.